I had already read Dr Richard Russel (1687-1759)’s Dissertation on the Use of Sea Water in Diseases of the Glands, published in 1752. He focused on scurvy, jaundice, leprosy and consumption, and was seen as one of the people who built up a passion, based on science, for healthy living. Apparently referred to as “Sea-Water Russel”, the good doctor described the recreational and therapeutic advantages of sea water, sunshine and fresh air. Dr Russell could not have known that people would embrace healthy seaside holidays, only a few decades after his death. 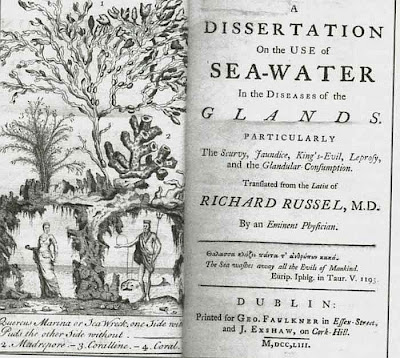 The attraction of the beach was popularised amongst wealthier families when King George III recovered from one mania or other in Dorset in 1789. In the 1790s, the royal family’s annual holidays were always taken at Weymouth, thus making the town one of the first seaside “resorts” in the country.

Brighton had to wait a little longer. During the early C19th, the Prince Regent popularised Brighton as a fashionable alternative to the wealthy spa towns. Even later Queen Victoria's long-standing patronage of the Isle of Wight and Ramsgate in Kent ensured the ongoing attraction of classy beach towns.

But what of ordinary working families who might have also benefited from fresh air, sea water and sunshine. Dr John Coakley Lettsom (1744-1815) was a well known London doctor. Lettsom achieved some important breakthroughs in his career but none as important as the founding of the Royal Sea Bathing Infirmary in Margate Kent in 1791.

Abandoned Britain noted that The Royal Sea Bathing Hospital was founded using funds donated by Prince regent to create a specialist hospital for treating Tuberculosis. Perhaps that is why the building was given such a grand entrance and imposing columns. 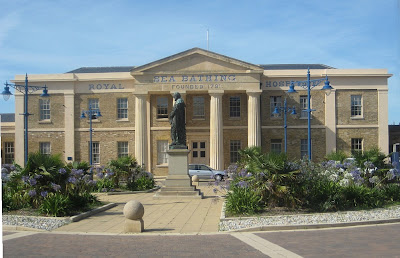 Historic Hospital Admission Records Project provides us with vital information. The infirmary’s specifically stated purpose was to be a ‘receptacle for the relief of the poor whose diseases required sea-bathing’, a practice which in the past had been possible only for families who could afford the substantial costs. This hospital was to house patients in open-air shelters so they could benefit from the sun and sea breezes, in addition to sea bathing. The infirmary opened (after a long contest between Margate and Southend to be the host for the institution) in Spring 1796. The new hospital was situated close to the beach and had a ‘bathing machine …built for the patients sole use’.

The Royal Sea Bathing Infirmary would have been flooded with customers, had there not been some sort of queuing system, and some costs to the referring agencies. In the early days, patients were accepted into the hospital under recommendation by subscribing governors. And they also had to be examined by a medical board either at London Workhouse or St George’s Hospital. The Radcliffe Infirmary at Oxford paid to maintain beds for its own clients. The St Pancras Workhouse also used the Margate facility. The Hospital for Sick Children started sending its first patients to Margate in 1855. 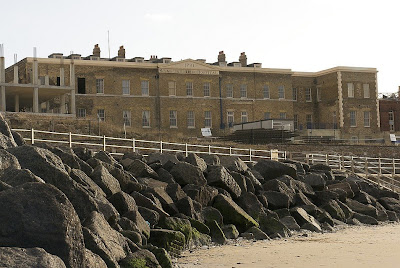 The hospital admitted both adults and children, male and female, although by early Victorian times, children were beginning to predominate. From the start, the majority of patients were suffering from some form of tubercular infection. Dr Sakula noted that scrofulous children from squalid London slums appeared to benefit most from Margate’s lovely lifestyle.

Clearly the hospital pioneered the use of sea bathing as a treatment, at least during the summer months when the service stayed open. But it took another 50 years before indoor salt water baths were installed; only then could in-patient treatment continue all year round.

What a shame that this grand old institution was closed in 1996 and was left to fall into decay. Abandoned Britain has amazing photos of the relic, before rebuilding commenced.

What an even greater shame that the building, which once served ordinary working families, was to be converted into 272 luxurious flats exclusively for very wealthy families (although as discussed in the comments section below, the plans were not successful). I am certain Dr Lettsom’s Quaker values would have been outraged. At least the hospital building and original chapel are Grade II listed and will be preserved.

F.G St Clair Strange wrote History of the Royal Sea Bathing Hospital Margate: 1791-1991, published by Meresborough Books in 1991. Alas the vandalism to the building didn’t start until 1996, after the book was in the bookshops. Many thanks to LondonGirl for sharing her knowledge. 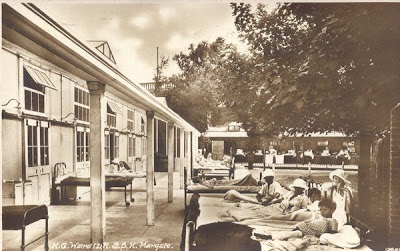 Unfortunately (or fortunately, depending on your point of view), the developer went into administration a few years ago and work on the Sea Bathing Hospital has ceased. Most of the old buildings had already been converted though (and in a very shoddy fashion according to residents quoted in the local papers). The halted second phase has left bare concrete skeletons of proposed apartment blocks in the grounds.

Far from being 'luxurious flats exclusively for very wealthy families' I understand that many were bought to let, resulting in some of Margate's high proportion of welfare dependent families being able to live there, thus, bizarrely, once more fulfilling the hospital's original remit of being a 'receptacle for the relief of the poor'!

Great post but I think there is some confusion about beach / seaside culture and the efficacy of seawater bathing. Incidentally the later is not tied just to the seaside as the excellent Mineral Water hospital in Bath is still thriving.

which I can't.
This is the link to what Richard is referring to:

and he seems just right.

Richard, thanks for your note. I am delighted that ordinary working families got to live in the old hospital, albeit unintentionally. Of course it is not good that the conversion was shoddy and incomplete.

My main historical interest was the increasing belief in the health-giving properties of sun, sea water and fresh air. Those late 18th century doctors were very clever indeed. Now I must go back to the BENEFICENCE, TEMPERANCE AND MEDICAL SCIENCE article to see what role physical exercise was seen to have, as the 19th century rolled on.

Hermes you are quite right. I will make the changes (eg keep "medicine" in the key words and remove "leisure").

What a wonderful post! I doubt there was ever than much demand for "luxury flats" in Margate - it's not the wealthiest neck of the woods, and I imagine most families prefer a house and outside space for their children to play in.

No criticism implied, it is a fascinting post and a very interesting subject.

I don't think swimming in the sea off most British resorts nowadays would be terribly beneficial to one's health. Who knows what unheard of diseases lurk in those murky depths.

I did think that the wealthy liked to go to Margate in Georgian times. Maybe I'm getting the town mixed up with another place.

How sad that this piece of history was not preserved. A very interesting read about the start of sun, sea, and fresh air as a medical use. Thank you Londongirl for recommending this site:)

London Girl sent me here. What a fascinating piece of history. I was aware that Bath was popular as the place to "take the waters" but had no idea an actual sea bathing hospital existed. Not surprised, tho, that children from London slums were the greatest beneficiaries of the sun, sea, and fresh air at Margate, only surprised that it took so long for tuberculosis to be recognized as a disease that flourishes in cramped quarters.

We moderns tend to think of Scientific Knowledge as being only the material that has been written in academic journals since the end of World War Two.

In the 1740s Dr Richard Russel starting writing on the use of sea-water for the cure of "enlarged lymphatic glands". Then other medicos read his material, analysed the impact on their own patients and expanded the field.

It is interesting that it took until 1791 until medicos had the courage of their convictions and built the Sea Bathing Hospital. Even then it took another 50 years before the hospital could be open all year. But the contributions of Drs Russel, Lettsom etc cannot be underestimated.

Interesting given your comment that the Royal National Hospital
for Rheumatic Diseases in Bath opened in 1738 as The Mineral Water Hospital. Then, it provided care for the impoverished sick who were attracted to Bath because of the supposed healing properties of the mineral water from the spa. I think we can expand this fascinating post to be 'water cures', eg.

I found yr site by chance while looking for info on the margate infirmary. I have an ancester died there 1867 age 12. But then i found you are interested in art etc. This boy's father was a george sivier c1826 southwark london-died 1866 of fever and exhaustion (TB?). He was an artist in oils and had exhibited 5 paintings at the royal academy and 4 at the british institute, between 1852 AND 1865.

I have been hunting him for 10yrs (my maternal gr gr gr grandfather), but cant find owt else, cannot find him or family on 1861 census or a place and date of birth, so if you have ever come across him at all, no matter how little the info id be very grateful for anything .

Hels said...
Thanks Jackie. With an ancestor in the art world, I go straight to the "The Royal Academy of Arts; a complete dictionary of contributors and their work".

Just as you undoubtedly found yourself, the Academy recorded Sivier's name, address, painting titles and painting dates. I would certainly be going through the Academy's records carefully, to see what else they have.

Hi, I would like advice on where to find information on George Slater, Surgeon, Margate, who lived from 1712 to 1776. I have an oil painting of this man.

perfect location for this particular surgeon but as you certain of his date of death?

The book "Remarks on the General Sea-Bathing Infirmary at West Brook, Near Margate; Its Public Utility and Local Treatment" mentions the local infirmary and George Slater's important role as one of the directors of this charity that opened in 1796!

Might you have a link to an online copy of "Remarks on the General Sea-Bathing Infirmary at West Brook, Near Margate; Its Public Utility and Local Treatment"

Plus Amazon wrote: This historic book may have numerous typos and missing text. Purchasers can download a free scanned copy of the original book (without typos) from the publisher. Not indexed. Not illustrated. 1820 edition.

THANKS for the citation. Sincerely, SR Slater

Interesting article..i was a patient here in 1964 suffering from bone TB. I was there for 9 months and rember well the huge sleeping verandahs andxaw3some grounds

I remember during the early 1950s that polio was an ongoing problem in my Melbourne primary school (and everywhere else possibly) but you are talking about 12 years later. Were you treated with comfort and efficacy?