A very young Emperor Franz Joseph came to the throne of Austria in 1848 and reigned for a long 68 years. Franz Joseph made a great difference to the look of his capital city, demolishing the city’s defensive, medieval walls in 1857 to build an imperial boulevard as an expression of the glorious Habsburg Empire. The Ringstrasse was never meant to divide the old city from the new; rather, I had assumed, it was a place for café society to see and be seen. In fact the walls had long been useless as a defensive structure in times of war and were an actual hinderance to free movement and trade within the newly enlarged city.

The Ringstrasse was the resulting new, wide boulevard, surrounding the centre of Vienna, today the First District and joining the city to the suburbs. The 4 ks of boulevard, and the buildings on both sides, took 30 years to complete (in 1890) and now is the defining characteristic of C19th Viennese grandeur. It’s enclosed by linden and plane trees, and little trams moving in both directions in a very efficient, clean system. 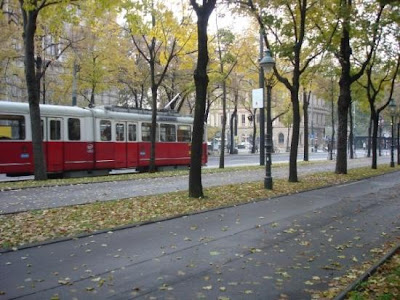 
A new golden age of building came to Vienna, based on this gracious Ringstrasse: all the city’s monumental institutions were located there. The buildings already present in the Innere Stadt were churches and imperial buildings; the new Ringstrasse developments were buildings which stressed secular culture and the new constitutional government, including the Parliament, Rathaus, University.

At least two institution were already in place, before the walls came down. So Franz Joseph cannot be blamed if you don’t like the Museum of Military History 1850-6 or the Votivkirche 1856-79. The museum designed by Ludwig Foerster and Theophil Hansen, taking elements from Byzantine, Hispano-Moorish and Neo-Gothic styles. The Votivkirche, built as an offering of thanks by architect Heinrich von Ferstel, was designed in the neo-Gothic style. Since the city-walls still existed at that point, the church wasn’t located exactly along the boulevard.

Staatsoper/Opera House 1863-9 was one of the first classical buildings along Ringstrasse. Presumably the architects chose the Italian Renaissance style since that era had been important for art and music. Visitors and tourists could walk around the very sumptuous interiors, then go straight to the Hotel Sacher for an after-the-performance supper! 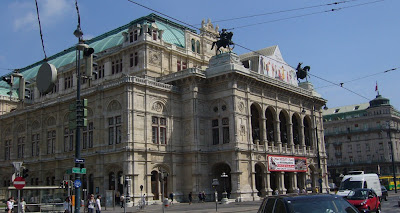 The Rathaus 1872-83 was designed by Friedrich von Schmidt in the Gothic style. The building served as the seat of the city council of Vienna and mayor, AND served as the assembly of the State of Vienna within Austria’s federal system. Facing the Rathaus is large lovely park, Rathauspark. Brennan McNulty's Blog provided very useful information on the Wien Museum in Karlsplatz. The museum collects material on the history of the city to art, fashion and modern culture, from the earliest settlements to the present day. [This museum was founded in 1887 and housed until after WW2 in the Rathaus].


Parliament House built 1874-83, designed by architect Baron Theophil von Hansen in the Greek revival style. He was also responsible for the interior decoration such as statues, paintings, furniture and chandeliers. NB statue of Athena and the fountain, a notable Viennese tourist attraction. Since destruction in WW2, most of the Parliamentary interior has been fully restored. Marble was everywhere. The debating chamber and galleries were based on an ancient Greek theatre. The classical Hall of Pillars was used for formal receptions. 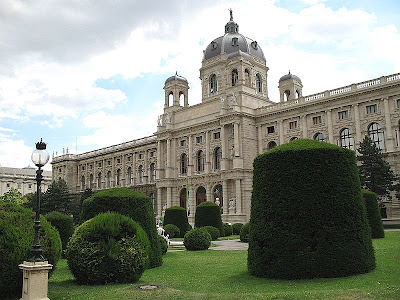 The Kunsthistorische Museum 1871-91 was build by architects Gottfried Semper and Carl Hasenauer. The visitor went through the lobby and up the stairs, past Canova's sculpture of Theseus and the Centaur. The Museum was an elaborate, neo renaissance building, as befitted such a fine and elaborate art collection, and was the first time that the entire collection could be gathered in one place. Of course since the gallery held 8000 paintings and only about 800 could be displayed at any one time, there was and is still a large portion of the collection in storage.

The University was founded in 1365 and is thus the oldest university in the German-speaking world. The main building on the Ringstraße was built by Heinrich von Ferstel 1877-84. The old building was located close to the Stuben Gate, Iganz Seipel Square, current home of the old University Church and Austrian Academy of Sciences.

Vienna needed its own very prestigious theatre of course, and so the Burgtheatre 1888 became another important public building to be completed along the newly laid out Ringstrasse. On the façade, busts of poets and famous characters from world literature were complimented by pairs of figures which provided the themes of many plays. The Burgtheatre had 2 long wings, each containing a magnificent staircase. The centre of the theatre was bombed during WW2 and had to be rebuilt, but the 2 staircases, with ceiling frescoes by Klimt, were safe. The interior, with 4 tiers, was splendid.

This was followed by the Museum of Natural History and Parliament House, classical architecture in the Habsburg taste. The Museum of Natural History 1872-91 was one of the important museums of this type, built to house the extraordinary collection of the Habsburgs. The museum’s two buildings were designed by Gottfried Semper and Karl von Hasenauer.

Franz Joseph culture was based on great architecture and parks, but it was also based on Vienna’s café society. In 1685 Emperor Leopold I granted an Armenian merchant the exclusive 20-year right to serve coffee and the drinking of Viennese-style coffee soon spread over central Europe: Marseilles and Paris, soon after Vienna, 1683; Nuremberg and Regensburg, 1686; Hamburg, 1687; Stuttgart, 1712; Berlin, 1721. By 1714 Vienna had already 11 licensed coffee houses.

During this period, the Neuner’s coffee house established itself as Vienna’s leading literary café. Its regular patrons included the best-known authors of the Biedermeier period. In 1824 Ignaz Neuner upgraded his café to the Silver Coffee House, Vienna’s most luxurious café. All the utensils and room accessories were made of silver. After the Silver Coffee House’s heyday, Café Griensteidl welcomed Viennese literary luminaries with an antique folksy decor and daily newspapers. And Café Zentral was elegant from the outside and gorgeous inside. Note that whereas Paris cafes concentrated on coffee, alcohol and a bohemian life style, Viennese cafes concentrated on coffee, cakes, stringed quartets and an elegant lifestyle.

Demel’s pastry shop in Michaelerpaltz was first founded in 1785. Patissier Christoph Demel acquired the business in 1857 and moved to its present position in 1888. An elaborate ground floor window-display showcased the confection shop. An upstairs café, the meeting point for the old high society.

A majestic palace, the Vienna residence of the Prince of Württemberg, was built on the magnificent Ringstrasse in 1863. Transformed into a sumptuous hotel for the world exhibition in 1873, Hotel Imperial still showcases the C19th romance of Vienna with marble, statues and spectacular crystal chandeliers. Right from the beginning it enjoyed a world-wide reputation as close to the opera, equipped with highest elegance and large comfort. The Sacher Hotel has been popular with the rich and famous ever since it opened in 1876 by pastry chef Franz Sacher's son, Eduard Sacher and his wife, Anna. Potatomato Blog concentrated on Ringstrasse food (naturally!) and reported that Sacher’s was still top notch.

Yet by 1873 Vienna held a reduced image in the minds of the rest of the world. The Austria-Hungary Empire had lost a significant amount of land and power over the last two decades, and a war with France and conflicts with Prussia had triggered internal social and economic upheavals. So there were several specific goals for a World Expo. Vienna wanted show off its economic reconstruction and position itself as a centre of exchange between the East and West, an empire equal in importance to France and Britain.

In 1870 Emperor Franz Joseph approved the Expo plan and put Baron Wilhelm von Schwarz-Sendborn, the man who had organised Austrian exhibits at previous world's fairs, in charge. Baron Schwarz-Sendborn wanted "a truly universal exhibition that would embrace every field on which human intellect has been at work".

The opening of the Vienna World Expo 1873 was an expression of the Habsburg monarchy’s material progress and economic achievement. The years of expansive commercial enterprise in late 1860s-early 1870s were characterised by railroad and industrial expansion, and the growth of Vienna. I won’t discuss the Expo’s location and facilities since Prater Park is nowhere near the Ringstrasse. But we need to note that the old railway station in the city had become too small and had to be rebuilt in time for the Expo. The splendid new Nordbahnhof building was completed in 1865, along with its sculptures and fresco painters. 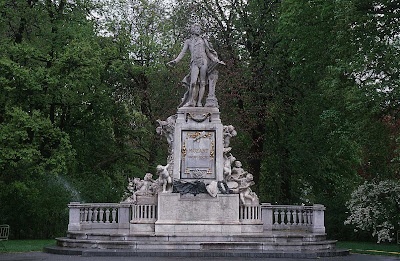 Mozart in a Ringstrasse Park


Eventually the Ringstrasse parks were filled with musicians’ statues: Mozart, Beethoven and Strauss, and concerts offered music by Mendelssohn, Schubert, Mahler, Brahms and Johann Strauss. The poet Frederick von Schiller was also celebrated, in front of the Fine Arts Academy. The Vienna of Franz Josef took its culture very seriously. Even today, if something really matters in Vienna, it's on the Ringstrasse.

Great writing about the Ringstrasse! I was in Vienna this year and it is an absolutely amazing city. The Albertina art museum also blew me away, and I can now say that it's my favorite art museum I've been to thus far in life!

Vienna came late to the idea of demolishing its city walls, long after most European capitals had recognised that modern artillery had made the walls redundant. In Paris, Napoleon III had already shown that the creation of broad boulevards around a city centre increased security because it made the erection of barricades difficult.

Read how Emperor Franz Joseph officially opened the Ringstrasse in Vienna in 1865, 150 years ago.

thank you. I went back into my post and expanded on the reason Franz Joseph pulled down the old walls and built the Ringstrasse.