As I showed in my post on late 19th century amusement centres, sporting activity, fun and healthy living were de rigeur amongst those families with some leisure time on their hands. 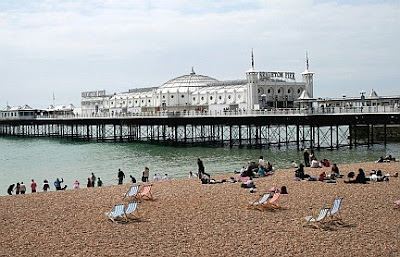 iknow Sussex made my point about Victorian and Edwardian seaside architecture. Hastings Pier was the creation of seaside architect Eugenius Birch who modelled the Hastings design on Brighton's West Pier (since lost). Hastings Pier first opened in 1872 and until 2010 was a hub for craft shops and amusements. At Eastbourne, Birch's glorious pier (1872) still stands in good condition. Eastbourne Pier stretches 1000’ out to sea and with its wide promenade proved perfect strolling ground for the upper classes arriving at Eastbourne and the Devonshire Hotels through the Victorian and Edwardian era.

Once the railway from London reached Southend, there was a great influx of summer time visitors. The large number of people must have made a bit of a mess of the existing wooden pier and in 1873, it was sold to the local council. Soon the Southend council decided to replace the pier with a new iron structure which was completed in 1889 at great expense.

Saltdean Lido, 1937,
with curved cafe in the centre

Brighton's Palace Pier, when it was opened in 1899, represented the finest architectural example of late Victorian seaside architecture. The Palace Pier was and is a centre for entertainment and for strolling by holiday visitors. [This was unlike its predecessor, the Chain Pier, with its function as docking site]. The late 19th century was a golden age of seaside resort architecture and entertainment centres, so the Palace Pier was appropriately ornate and eccentric in its architectural style, with creative use of cast-iron snakes on lamp posts. By 1911 the pier had its own theatre, and ever since then, additions and modernisations have occurred.

Something happened in the inter-war period! The popularity of water sports encouraged many seaside resort councils to invest heavily in entertainment areas, to cater for the dramatic increase in the numbers of holiday makers. But now families wanted something different. As Douglas d'Enno wrote, it became as essential to have a lido as it had been to have a pier, forty years before. A lido was a public outdoor swimming pool and ALL the surrounding facilities needed for swimming, sunbaking and water sports. Perhaps the timing of the lidos was due to the introduction of mixed bathing in the more relaxed inter-war period.

New Anzac musings blog wrote that a gem of a Lido Land lies on the South Coast Road at Saltdean near Brighton. It was designed by RWH Jones in 1937, in the Art Deco style, and opened the following year. Time-wise, location-wise and style-wise, the Lido owed a debt to the De La Warre Pavilion at nearby Bexhill-On-Sea, which itself had only opened in Dec 1935. The clever use of curved steel and glass created a feeling of space and movement. As in most 1930s lido designs, the buildings were meant to remind the viewer of an ocean cruiser’s stylish lines. The Lido had a café in the central block, changing rooms on the ground floor and sun terraces above these, which the Art Deco Blog showed beautifully. 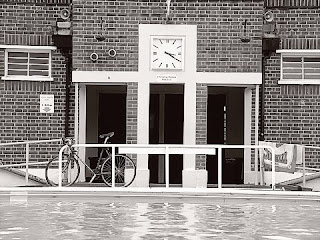 Tired of London, Tired of Life discussed Parliament Hill Lido, opened in 1938 in Hampstead Heath. If the entrance of Parliament Hill Lido reminds you of Brockwell Lido, apparently the initial design intentionally replicated that of Victoria Park Lido 1936 (later demolished) and Brockwell Park Lido 1937 (later removed and expanded). Art Deco Buildings has a tragic list of those lidos that were eventually doomed.

Although many lidos have closed, some fierce battles have been fought to save quite a few of them: one of the most enduring was the campaign to save London Fields Lido, which re-opened in October 2006.

Droitwich Lido re-opened in 2007, the Bristol Clifton Lido in 2008 and the Wood Green Lido in Banbury in 2009. Some campaigns remain ongoing, especially the one to save Broomhill Pool in Ipswich.
(See www.savebroomhillpool.org )

For those interested in lidos, Janet Smith's book Liquid Assets is a must!

Thanks for the Janet Smith reference, Broomhill. I will definitely get the book via our library.

A historical problem remains, however. The holiday resort councils must have spent a fortune building their Victorian pleasure piers, for visitors' entertainment and sociable strolling. They were HUGELY popular from 1870 into the Edwardian years.

Then it all stopped, presumably because the Great War changed the world. So did the holiday resort councils spent as much money on lidos during the inter-war period? Were the pleasure piers too old fashioned? not sexy enough? not sporty enough?

History can really be fun :)

Hels, the doorway at Cooge was part of the Giles Baths complex that included a gym, hot sea baths and a private sunbaking area. It was demolished in 2000 but they preserved the portico. I found this website that tells you a bit more about the history of Giles Baths.

You should have a squiz at this series of photos of swimming pools put together by the guardian http://www.guardian.co.uk/artanddesign/gallery/2009/sep/17/swimming-pool-architecture-margaret-howell

There were also some interesting photos of pools featured in the 'Modern Times' exhibition, which I saw at Heide this year. Not sure if they pop up online anywhere though.

I must have late Victorian sensibilities! I find the whole concept of the pier and all it entails so much more appealing.

I feel no urge to choose between them - I find both lidos and piers fantastic structures. The pier in Eastbourne is one I know particularly well, as my grandmother lived there until I was 15, and my uncle still lives there.

And, of course, there are all the non-coastal lidos, too.

Chris and Londongirl, many thanks.

The reason I posed the topic as a choice was because the piers and the lidos seemed to be targetted at separate markets. This seemed inevitable, since the world had moved on at great speed, between the late 19th century and the 1930s.

In any case, modern councils that destroy their piers and lidos, or allow them to fall into decay, are criminally negligent.

"non-coastal lidos".. there is another concept I better have a closer look at.

One of the oldest, in south London, is the Tooting Bec Lido:

And there's a huge one in Cambridge, too:

Earlier than your period, but I recently came across these pictures of the abandoned Royal Seabathing Hospital, built at the end of the 18th century, and thought you might find them of interest.

The Royal Sea Bathing Hospital at Margate was opened in 1791? That is fantastic. I have read the earliest medical writings of the late 18th century about sea air and salt water, but never seen a building dedicated to that sort of health care. At least not that early.

It will be my very next bit of blogging, many thanks LondonGirl.

Glad it's of interest to you! FYI, the National Archives also have material relating to it:

and there's an article about the history of the place here:

an authoritative book (British Seaside Piers by Anthony Wills and Tim Phillips) has just been published by English Heritage on behalf of the National Piers Society.

The date of publication was the 200th anniversary of the opening of the first public pier, at Ryde on the Isle of Wight, in 1814.

Cleveland Pools in Bath is a semi-circular Georgian lido built in 1815! It may be the oldest public outdoor swimming pool in the UK. The site included bathing pools, changing rooms and a manager's cottage.

In August 2014 the Heritage Lottery Fund awarded £4.5 million to cover most of the rebuilding costs.

The original Poplar Baths were constructed in 1852. During the 1920's and 1930's another round of building public bath houses and swimming pools took place again motivated by an awareness of the need to improve the health of Britain's poor. A number of iconic projects took place during this time including the Peckham Experiment on the opposite side of the Thames to Poplar. The new baths were built in the art deco style from 1932 to 1934. The building included two pools, the larger of which would be covered over in the winter and used as a dance hall and cinema and for boxing and wrestling competitions.
http://adrianyekkes.blogspot.com.au/2016/07/poplar-baths-art-deco-icon-reopens.html

Restoration work on the UK's only Georgian open-air swimming pool is scheduled to start in Feb 2017, provided Heritage Lottery Fund support can be secured. Cleveland Pools in Bath was built in 1815.

The project on the complex, which comprises a caretaker's cottage, 12 changing cubicles and a spring-fed plunge pool, would see it restored to its Georgian splendour and new elements added eg a river pontoon.

Cleveland Pools in Bath are a bit neglected *nod*
http://ccgi.providan.plus.com/pixelpost/index.php?showimage=526

I sincerely hope the Heritage Lottery Fund support comes through in time and in the right amount.