Carlo Catani (1852-1918) was born in Florence where he learned engineering at the Technical Institute, and was soon employed in railway con­struction. Early in 1876 Catani and two of his colleagues decided to move to New Zealand. They sailed out of Europe but on arriving in New Zealand, they found no professional work for the new arrivals. Catani and his friends decided instead to push on to Melbourne.

Within a few weeks all three had joined the Department of Lands and Survey as draftsmen. In 1880 Catani was registered as a surveyor under the Land Act. Two years later he and his friends were transferred to the Public Works Dept, where they were employed as engin­eer­ing draughts people preparing plans for harbours, jetties and coast works, and by early 1886 they were assistant engineers. Melbourne was booming and needed keen, young, skilled men. 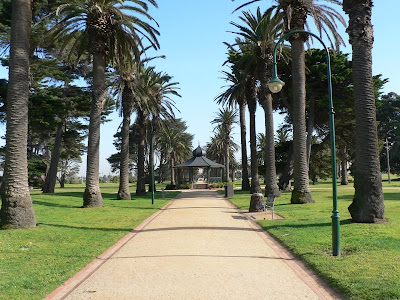 Catani Gardens,
main path looking towards the rotunda/bandstand
built for the 1988 bi-centenary.

This Italian civil engineer supervised many significant projects in and around Melbourne. Casey Cardinia blog wrote that Carlo Catani was one of the Engineers in charge of the Koo-Wee-Rup Swamp Drainage scheme just outside Melbourne and was Catani also responsible for the first mechanical equipment used on the Swamp. This transformed the area into prime farmland.

Catani’s other work with the Public Works Dept included flood mitigation works on the Yarra River. He was responsible for planting the now-magnificent elm trees along Alexandra Avenue. And he designed the Morrell bridge.

St Kilda Council created a foreshore committee in 1906. By that year Catani, who was Chief Engineer of the Public Works Dept, was con­tract­ed to reclaim and beautify the foreshore from St Kilda south-wards down the bay. His successful plan resulted in our famous strolling district, leaving space for beach facilities that became core parts of Melbourne’s foreshore incl Luna Park 1912, the Palais Theatre and Palais de Danse 1926 and just before World War 2, St Moritz Ice Rink 1939. As a result, several landmarks along the fore­shore were his creations. The gardens he designed at the end of Fitzroy Street were named after him, as was the Catani arch bridge on the St Kilda foreshore. 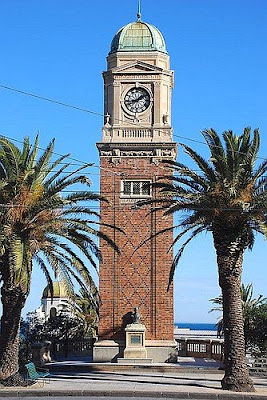 The clock tower is a very fine copper domed, classical construction that stands with pride on the StKilda esplanade/foreshore. Carlo Catani’s bust, as you can see in the photo, still appears on the Clock tower and it is this monument to a young Italian adventurer that I knew best. Alas, as Melbourne Heritage Watch wrote, the Catani Clock was stopped by rats. 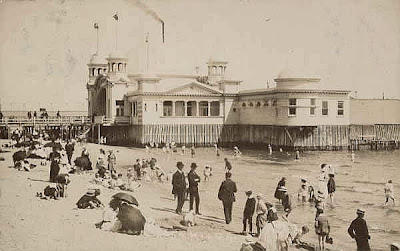 I was surprised and delighted to read that the Afrilog Construction, Kenya blog, in CON­STRUCTION NEWS AROUND AUST­RAL­IA, urged that the design of any new development in St Kilda (still being debated in 2009) should remain true to Federation-era legacy of Carlo Catani. Of course our Kenyan blogger colleague is quite correct.

I have only visited Melbourne once and never went to St.Kilda! I hope to visit again and I will certainly keep Catani in mind.

Please do not shoot me down, but I see a distinctive British feel to the buildings shown!

the Federation-era legacy of Carlo Catani (and others) was very special. After the 1893 depression and before the carnage of WW1 that was about to overtake us, Melbournians thought they had the greatest city on earth. The royals had visited, the boulevards were long and straight, the public gardens were gorgeous, people loved the hot sea baths and Luna Park was hugely popular.