In light of the The Art Newspaper 's annual international survey published each year on the most attended museums, I thought I would ask other art-related bloggers which their favourite art gallery was.

Bruce at Victorian History has already indicated his preferences. "My own personal favourites are Musée d'Orsay with its wonderful displays of both the impressionists and the post-impressionists, and the Musée Marmottan with its Monets, including some absolutely delightful caricatures".

Kristin at ArtEco was totally rapt in the Gustave Moreau Museum in Paris. Gustave Moreau was a symbolist painter that turned his home into a museum in 1903, so that the paintings are still hanging where he left them.

One of my favourites is The Wallace Collection at Hertford House in Manchester Square, London. This may seem surprising since I am not a huge fan of 18th century French paintings and decorative arts. But the idea of using the architecture of a home to amass and display that very home's own collections is irresistible. I almost expect the Marquess of Hertford to wander down the hall to do a spot of dusting. 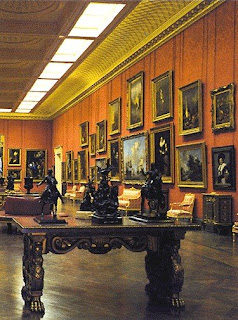 So what is your favourite gallery? All I need is a Comment with the name of the gallery, the city where it is located and a few lines on why you like spending time there.

My unscientific guess was that people associated with art, as lecturers/curators/collectors/artists or bloggers, would not necessarily select the world's biggest and most famous galleries - the Louvre in Paris; Centre Pompidou in Paris; Tate Modern in London, British Museum in London and the Metropolitan Museum of Art in New York.

Let me refer you to one quick survey. The Guardian newspaper asked the expert panel: which is your favourite art gallery? in May 2008 and their results were as follows: The Serpentine, Kensington Gardens London; Museum of Modern Art in New York; Guggenheim Bilbao; the Neue Galerie New York; Kerlin Gallery in Dublin; the Ingleby in Edinburgh; Paul Stolper, an independent gallery in east London; the Prado in Madrid. This list provided quite an interesting mixture of the world-famous and the more local.

Hi, Hels. I don't go to art galleries. When used to visit museums I usually went to the Gulbenkian Museum in Lisbon (Portugal). If you mean art galleries on the internet, this blog is my favorite. It has all my favorite works of art, after all. :)

Hi Hels,
I must confess that I am influenced by proximity and coincidences in time.

I am a member of the NGV in Melbourne so that is a natural favourite.

I lived in London for some time and I used The British Museum as a 'shortcut' often entering through the back door and going via one gallery or another to the bus stops in New Oxford St.

I was lucky enough to visit Tate Modern within a few days of it opening so it is a favourite. The building itself is industrial deco, the location on the Thames and the view from the upper level corridors and the monumental space on the groung floor.

Last month I saw the 'From Within Outward' Frank Lloyd Wright exhibition during the 50th Anniversary of the Guggenheim in NYC so it is a recent memory of a favourite where the building and the exhibition came together perfectly.

Too hard to nominate a single favourite but I do like the National Portrait Gallery in London. I find it interesting to see how people have been represented through different time periods. I haven't been to the one in Canberra yet but it is on the list.
Cheers,
David

Was the old Tate,close and quite free when I was a teen-ager. Now Toronto's AGO,especially the Henry Moore gallery. Gherry's add ons are impressive, although an art gallery does not necessarily need to be a work of art in itself, in my view.

Thank you for the invite. I wish I could share with you photos that I saw just yesterday of paintings that are in the Museum on the NAS Pensacola Base. I was amazed to say the least. They were paintings of our military vessels. They were so good that most of them I thought they were photographs. The way that they were captured on canvas, though, it gave you the feeling that you were actually there in the photo.
I also love the National Gallery of Arts in Washington D.C.
I have only looked on line and hope to be able to see first hand someday.
http://www.nga.gov/

Hmmm. I had to think about this one. I have never really had an affinity with art galleries as I have always tended towards museums and particularly those concerned with design.

I suppose I would have to say that the institution that has always been there for me would have to be the Victoria & Albert museum in London. I have loved the building, its history, the reasoning behind the institution and the collection, both in reality and online. The V&A is my rock. I would probably be happy living in the basement somewhere.

However, if I am pushed to choose an art gallery I would probably go for the Tate St Ives. It's a small gallery that although connected to the Tate of London, has made an effort to tie itself to the local culture. It has rarely if ever, talked down to the small town and rural population that it finds itself in, and although many were unsure about having this arm of the metroplis in our midst, the Tate has fit in really well and is now an integral part of the Cornish makeup.

It's a relaxed area, as you would expect, being set in a seaside town, and if you get tired of Ben Nicholson's and Barbara Hepworth's, they have a great curved panoramic window filled only by the view of the ocean and the sky, which ultimately inspired much of the work in the gallery, very fitting.

Hels, thanks for yr comments on my blog. Of course my favourite Art Gallery is going to be in Brisbane & there is not one, but 3. GOMA which is our newest "Gallery of Modern Art" which has recently showcased Andy Warhole & Picasso - both got record attendances & right next door is the Qld Art Gallery currently showing "The Met" art on loan from the Metropolitan Gallery in New York - exclusive to Brisbane, both galleries were the most frequented (per capita) in Australia in 2008. Situated on the banks of our river & both are beautifully designed. Philip Bacon Gallery in Fort Valley is another favourite showcasing high-end investment art representing Margaret Olley, William Robinson & my all time favourite Michael Zavros. I could go on and on...but I wont. Thanks for the opportunity. Janet from The Manly Gallery Brisbane.

John,
The V&A is your rock!

Me too. In the early 1990s, I was doing a lot of writing about Huguenot and English silversmiths during the first generation after the Edict of Nantes (approx 1685-1725).

The V & A let me into their vaults to measure, weigh, draw, smell and love all the Huguenot pieces they had. I thought I had died and gone to heaven.

Janet K,
That strip of arts facilities along the banks of the river is amazing. The NGV arranged a tour of the Picasso and Friends exhibition and all the Victorians, hardened art critics, raved.

I am another who prefers museums over galleries. What I enjoy most is visiting museums on my travels, rather than frequenting local collections regularly.

I thought long and hard about this from various angles - the answer has to be the Louvre simply because of the quality and size of the collection. Some of my favourite paintings are there.

Great writing about the Ringstrasse! I was in Vienna this year and it is an absolutely amazing city. The Albertina Art Museum also blew me away, and I can now say that it's my favorite art museum I've been to thus far in life!

Thank you Helen! For your comments and for adding my affection to your blog:)
Three other museums that has had a great impact on me would be The Uffizi (Florence).
The Astrup Fernley Museum and Samtidskunstmuseumet in Oslo. They taught me many valuable lessons:)

Consider the Holburne Museum in Bath.

The Impressionism: Capturing Life exhibition centres on figurative paintings by some of the artists that exhibited at the first Impressionist exhibition of 1874, including Edgar Degas, Berthe Morisot, Camille Pissarro, Pierre-Auguste Renoir and Alfred Sisley. Significant loans from the Tate, The National Gallery, London and The Scottish National Gallery etc feature alongside the Holburne’s works on paper by the important but often overlooked British Impressionist Sir George Clausen, founder-member of the New English Art Club. The exhibition ends 5th June 2016.

I have only been to Bath once and I haven't visited the Holburne Museum. But I must say that Sir William seemed to know about collecting porcelain, silver, portrait miniatures, old master paintings, books, furniture and enamels. My favourite art objects!