A Ballets Russes exhibition has opened in the Arts Centre Melbourne (June-Sept 2009), focusing on their dance, design and vis­ual arts. It is the 100th anniversary of the company’s 1909 opening.


The Ballets Russes performed under the directorship of Sergei Diag­hilev in 1909-29 and travelled across Europe. Although many of the dancers came from the Imperial Ballet of St Pet­er­sburg, Paris became their favourite home since, just before the Russian Revolution and after, Paris absorbed a large Russian ex-pat commun­ity. In time, the younger dancers were trained in Paris, not in St Petersburg. The company featured great choreographers like Michel Fokine, Leonide Massine, Vaslav Nijinsky and George Balanchine. 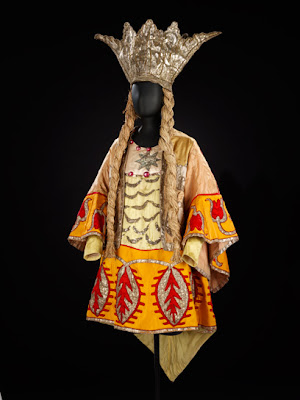 I have no doubt the company’s new way of presenting dance and music was amazing, but I want to concentrate on something else. The comp­any was keen to encourage the collaboration of modern artists in the design of sets and costumes, especially Leon Bakst. Their very special designs contributed enormously to the excitement. 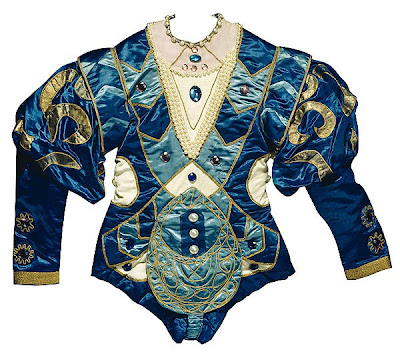 Why were Ballets Russes designs so fascinating? At least two possib­ilities were offered. Firstly an intense fascination for Orientalism was the largest influence on stylistic change just before WW1. As eurbanista blog showed in Fash­ion History: From the Belle Epoque through WW1, the Ballets Russes performed oriental tales, dressed in brightly coloured cost­umes of exotic Eastern-style design. The most sensuous Orientalist of all, Bakst excited ballet lovers with the exotic cos­tumes and sets he designed for Scheher­azade, complete with slaves and harem girls doing unspeakable things. The performances were a whirlwind, so viewers had to watch the move­ments quickly. Europe was shocked and they loved every minute of it.

Secondly, as The Textile Blog: The Ballets Russes explained, many Europeans saw the Rus­s­ian Empire as a backward, cultural desert, full of citiz­ens in colourful peasant costumes. The Ballets Russes play­ed up to those images and magnified them a hundred fold. The set designs, costumes, music and dan­cers were all about vibrant colour. Europe itself was going through a long pastel phase, so they were ent­ranced with Ballets Russes’ strong colour palette, vibrant patt­erns & sexy appearance. Leon Bakst’s palette of strong orang­es, pinks and ultramarines perfectly suited the bold, Russian elem­ents of Igor Stravinsky's music and Michel Fokine's choreography.

Yet French designers could also excite passion for the Russians. The Starry-Eyed Milliner was besotted with the most beautiful exhibit objects, especially costumes designed by French artist Henri Matisse for Le Rossignol. His hand-painted silks and metallic embroidery seemed to embodied Orientalism and Russian feeling very well. And the company specifically recruited other French and Spanish artists, including Braque, Picasso, Chanel, Matisse, Derain, Dalí, Utrillo, Rouault, Laurencin and Gris. A designer had to be gorgeous, not necessarily Russian. Miss Peelpants swooned over these old costumes.

So before WW1, the Ballets Russes started to open minds to rich­ly coloured and vibrant textiles and costume design. And years later they still do. In an Amer­ican exhibition in the Wadsworth Ath­eneum in 2006, designs for Petrushka, Le Spectre de la rose, L'Après-midi d'un faune, and Les Noces were on view. Actual costumes from Diaghilev productions were displayed, including Schéhérazade, Le Dieu Bleu, Le Sacre du Printemps, Le Chant du Rossignol, The Sleeping Princess, and Le Bal. In this Australian display, visitors can see Le Coq d’or, Petrouchka, Nutcracker and Firebird.

Readers might like to see a Russian theatre art collection that was shown in St Petersburg in 2008. Called Russian Theatre and Decorative Art of the 1880s to the 1930s, it was a truly monumental project that displayed 800 watercolours, drawings, theatre posters, engravings and gouaches by 140 artists. The most important works included Lev Bakst’s costume designs for his ballets.

I'm looking forward to getting along to see the exhibition. Thanks for highlighting it Helen.

It's hard to believe that one hundred years on and everything that we've all been through, that any element of the Ballets Russes can still make us short of breath with both excitement and wonder.

Those Russians certainly knew what they were doing in 1909.

for an examination of the Russian influence on Edwardian Society, see http://www.edwardianpromenade.com/social-history/the-russian-influence-on-edwardian-society/#disqus_thread

Ballets Russes exhibition had glories and wonderful art and design open their. thanks for posting.

that is so true. When I first got involved in a ballet group, it was for the dance itself. It was only years later, as an art history student, that I thought the costumes, sets and music were equally important.