Mechanics' Institutes II - who did they serve?

In pursuing motivations for the Mechanics' Institutes movement, I was hoping that middle class philanthropy or middle class hopes of improving workers' morality were NOT the dominant elements. The genteel philanthropists and self-improving artisans who founded the individual Institutes may have wanted to draw workers away from the pubs and noisy music halls. Or to keep them busy at night, improving their minds instead of thinking of petty crime.
*
See History and Description of the Mechanics’ Institute, by David Roh at Transliteracies: “The Mechanics’ Institute sprang up in 19th century England for the ostensible purpose of imparting upon the working class mechanic knowledge of the sciences, literature and arts. In actuality, a myriad of purposes shrouded the creation of these institutes, which were ultimately appropriated by the middle class when it became apparent that the working class was not as receptive as had been anticipated. Some scholars conjecture that they were really formed as a means of control and indoctrination of the working class, allowing only as little real knowledge as needed for them to improve as workers, but little else. As the middle class began to move in, the working class retreated to the Institute’s libraries and reading rooms, where they were free to discuss topics that interested them.”

"Richard Altick and Frederick Engels writes of the Mechanics’ Institute as a tool of middle-class oppression of the lower class, while others like Ian Inkster paint it as a marker of class divisions in the rapidly changing social order of the post-industrial era. Edward Royle argues that they actually partly succeeded in their original mission of enlightening the working class. Of particular interest may be its effect on kinds of reading material it exposed to its working class members and how they may have influenced their ideologies." 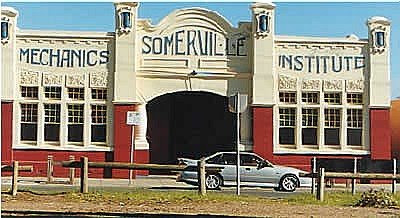 Perhaps we need to ask if the English model, as described here, was picked up lock stock and barrel by Australians? Perhaps a younger, less class-bound nation found a great concept in the motherland, then modified it for Australian conditions. Secondly there may have been a difference between Mechanics' Institutes in large cities, with their universities, technical schools and libraries, and those in small rural towns. Finally the motivation for starting a movement in one period (1830s-60s) might change with the passage of time. The children and grandchildren of the original settlers in gold towns faced a very different world by the end of the 19th century.

References:
1.Donald Barker, “Funding communal culture: opportunism and standardisation of funding for mechanics’ institutes in colonial Victoria,” in The Australian Library Journal.
2.Anne Firth, “Culture and Wealth Creation: Mechanics’ Institutes and the Emergence of Political Economy in Early Nineteenth-Century Britain,? in History of Intellectual Culture.
Posted by Hels at 23.2.09

Hello HELS,
Please come to my Royal Rendezvous blog to collect your award!