Australia's Own School of Landscape Painting

In the light of last week's interview, I now have to explain why the Heidelberg School of Australian art produced such important paintings.

By 1886 nationalism was on the rise in Australia and one of the imp­ort­ant questions facing the colonies was whether to federate. I suppose it was inevitable that Australia WOULD one day federate, but the details about when, and which states would want to be included, were still very uncertain.

Landscape painting was deeply linked to cultural nat­ion­alism in Aus­tralia then, and the work of those artists who engaged with these broader cultural ideas was increasingly seen as the Nat­ional School of Art. Romantic images of stockmen and gold prospectors symb­olised a simpler, agricultural Australia. If this bucolic life had ever existed, by the 1880s it was well and truly subordinate to city life. 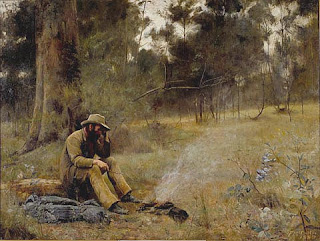 McCubbin, Down on his Luck

Frederick McCubbin teamed up with Tom Roberts in Box Hill, an area on the edge of Melbourne that ap­p­eared in many early McCubbin paintings, including While the Billy Boils 1886. This very small work seemed to be a trial run for Down On His Luck 1886. The figure appeared lonely, but the man could have been living off the land as best he could. The vegetation in this image was closer, more dense, more bluish, more encompassing. This title clarified that times were tough in the bush i.e on the land. He made the country side look pretty and benign, but perh­aps that was the point. ­In my opinion, McCubbin was true to the real colours of the Austral­ian bush and to its harshness; his paintings did not look like Gainsborough with kangaroos. 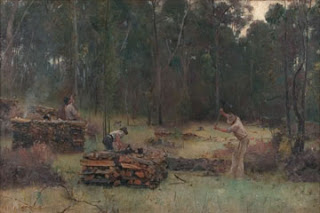 In 1886 Tom Roberts joined Frederick McCub­bin and Louis Abrah­ams, young men he had met much earlier at the National Gallery of Victoria art sch­ool. They set up an art­is­ts' camp in the bush, initially in Gardiner’s Creek, Box Hill. The Wood Split­ters 1886 was one of the first Australian works to show the activities of ordinary rural lab­ourers. Roberts was clearly infl­uen­ced by the French painters of the Barbizon school, whose work extol­led the dignity of the rural lab­ourers and whose method involved sketching directly at the scene. This was also one of the works made by Roberts from sketches drawn at their camp. Roberts used a cool palette to capture the eucalypts and the misty winter light.

Then during the important years of 1888-90, Roberts joined Charles Conder and Arthur Streeton, painting at the old farmhouse on the Eag­lemont Estate owned by Charles Davies. During these summers at Box Hill and Eag­le­mont, it must have been a fair­ly basic life­: food cook­ed as best they could over a fire, drought and flies by day, lighting by can­dles at night, beds made from sack­ing, no wifely com­panionsh­ip. At least on weekends, they were vis­it­ed by many ot­h­er art colleagues and students, especially young people still studying at the Nat­ional Gallery of Victoria school, a hot bed of artistic nationalism. So the artists’ camp was a stim­u­l­­at­ing, intimate exper­ien­ce, one they remembered fondly for the rest of their lives.

Streeton’s work Selector’s Hut/Whelan on the Log 1890 was painted in summer 1890, on the Eaglemont hillside. The model for the se­l­ector, relaxing on the log, was Jack Whelan. He was the caretak­er of the estate, and at this time shared the old house on the estate with Streeton. Another work depict­ing Jack Whelan, and rep­ortedly painted at the same site on the same day, is Under a Southern Sun by Charles Conder. 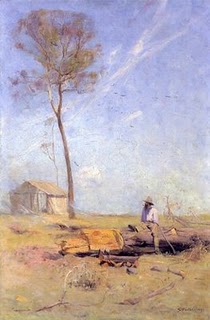 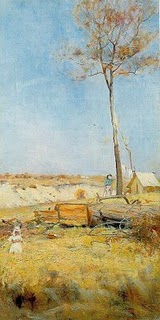 they are super artists and have stood the test of time, even 120 years later.

I want to refer readers to Intelliblog's analysis of McCubbin's art. Nicholas noted that "his 1887 painting The Morning Train is a good example of McCubbin’s Heidelberg Impressionistic style. There is a painterly quality to the painting, with its layers of colour, scumbling of paint, light and dark, impasto and wash. The light and dark contrasts and the harsh morning light point out the difference between nature and machine, the bucolic and the metropolitan". I largely agree.

I'm here from Nicholas' blog. That's a great post and it has prompted me to find out more about Australia's landscape painters. The works you have presented are gorgeous!

My students always want lectures on the Heidelberg School of Art in the 1880s and 90s. There were many Impressionist artists in the world at that time, but there was something quite special about an emerging nation, not yet Federated, creating and discovering its own brand of art, literature and music.

I'm impressed, I must say. Rarely do I encounter a blog that's both educative and engaging, and without a doubt, you have hit the nail on the head. The problem is something which not enough folks are speaking intelligently about. Now i'm very happy I stumbled across this during my hunt for something regarding this.

thanks. If you love the Heidelberg School artists, now would be an excellent time to visit the Geelong Gallery to see the Arthur Streeton exhibition. Well worth the drive.