"Pushing Time Away" in Vienna

Prof Peter Singer, born safely in Australia straight after the 1939-1945 war, wanted to get to know his late grandfather, David Oppenheim. This was a man who died in the war in 1943, before he could reach a safe place. Luckily for Singer, heaps of documents survived. His aunt, Doris Liffman, had studied some of the letter-based material years earlier for her university degree.

These days I ask my students in Melbourne to read Pushing Time Away ( Ecco Publications, 2003), but not because they are necessarily sympathetic to Peter Singer’s task in discovering his own family history. Rather I want them to un­derstand Viennese Jewish intellectual life from the late 19th century until 1933.

A new golden age of building came to Vienna, based on the grac­ious Ring­strasse (1860-90): all the city’s great institutions were lo­cated there. Different from the churches and imperial buildings which were already present in central Vienna, the new Ringstrasse devel­op­ments were buildings which stressed secular culture, education and the new constitutional government, including the Parliament, Rathaus, galleries and University. But above all, it was a place for café society to parade and discuss. 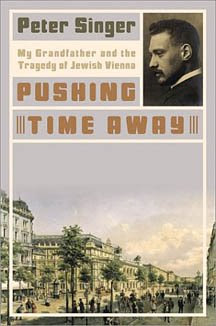 In Oppenheim, Singer found a well placed man to witness Vien­na’s Golden Age. Oppenheim “only” taught classical languages in a high-class school (Akademisches Gymansium), so he was not in the cen­tre of Vienna’s intellectual ferment at work. But he moved to the cen­tre in everything he did. Oppenheim's life was lived in cos­mop­olitan Vienna and he could not help contemplating and writ­ing about many of the significant issues that crossed his fertile mind. Singer may have been rescuing his grandfather’s memory, but the reader uses Oppen­heim’s connections to link up with Freud, Adler and the other members of their group.

I am uncertain what to make of Singer’s grandmother, Amalie Pollack Oppenheim. She was no intellectual slouch herself, having enrolled at the University of Vienna in 1899; she was only the 39th woman to grad­uate from that august institution ever. But her career went no­where, so one is left to guess that her role was a] raising healthy, happy, educated children and b] supporting her husband in his resear­ch, writing and publications. I was quite interested in the comp­lex­ities of David’s and Amalie’s relationship, but I would have loved to have known what contributions to learning Amalie made, outside the home. At least Amalie had the huge good luck and the strength to survive the camps, and to reach freedom in Australia.

Historical researchers have to thank families who kept copies of all the letters they wrote and received. Those families have enor­mous foresight. And even had David Oppenheim been born in Ballarat or Leeds, his story would have been worth telling. But Pushing Time Away focused on the critical moments in the Austro-Hungarian Empire’s transition from the late 19th century glory days and learning, to the arrival of Nazism and despair. The book’s subtitle, The Tragedy of Jewish Vienna, should have been changed to The Great Successes and Unthinkable Tragedy of Jewish Vienna. Timing is indeed everything.

I noticed your blog about my grandparents. I'm glad you find the book useful and worth recommending to students. I can't find any information on your blog or in your profile about where you teach, though - or even what your last name is.

Since you expressed interest in knowing more about my grand mother, you may wish to contact my sister, Joan Dwyer. Joan knew her better than I did, since she is 6 years older than me, and has given a talk about her. I am sure she would send you the text of it if you wish.

Thanks for suggesting this book and review in class yesterday. I have bought some excellent family biographies on Vienna until 1938.

you will love it. Alongside Pushing Time Away (2003), I also loved The Hare with Amber Eyes (2010) by Edmund de Waal. And Good Living Street: The Fortunes of My Viennese Family (2011) by Tim Bonyhady.