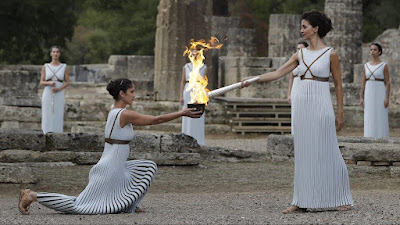 What the ancient Olympic Flame lighting ceremony in Olympia
might have looked like, NBC Sports
The Olympic flame was born in an an­c­ient Greek temple to honour Hera, queen of the gods. Her shrine was the home of the Olympic Games, a cyp­ress-shaded site in Olym­p­ia where the first Games were held in 776 BC. The flame was carried across Greece to Ath­ens, then handed over to the next Games’ host committee. Olympia was the dep­art­ure point that linked the Ancient and Modern Games. [And it stored Baron de Coub­ertin’s heart]. 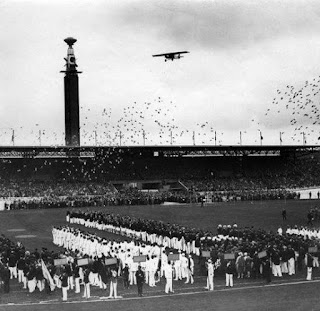 Amsterdam Olympic Games, 1928
First modern games to light a flame in the opening ceremony without a relay
Note the flame on top of the tower 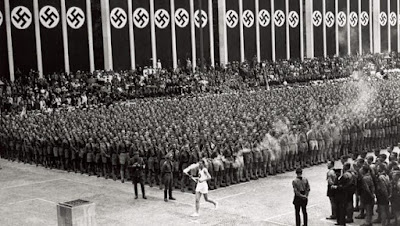 Fritz Schilgen, the last relay runner, entered the Berlin Stadium
1936
Ancient Greeks never had a relay of torchbearers. So why did the mod­ern Olympic flame go on a relay from Olympia each time? It celeb­rat­ed the passing of the sac­red flame of spirit from one man to the next. The re­l­ay thus: a] heralded the next Olympic Games and b] tran­smitted peace & friendship. Because it tra­v­elled thousands of ks, the Olympic flame had to be lit some months be­f­ore each Games started.

The highlight of all Opening Ceremonies was the flame’s entrance into the stadium. The first Modern Games where a flame was lit at the entr­an­ce was the 1928 Amsterdam Games, before lighting the cauldron! 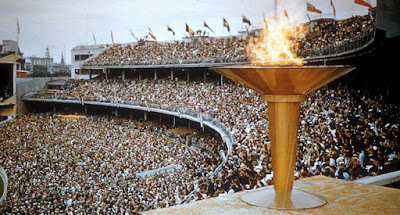 Melbourne 1956
100,000 people watched the cauldron being lit
In 1931 Carl Diem got International Olym­pic Com­m­ittee to give the 1936 Games to Berlin. Hit­ler disliked the modern Olympic move­ment, but propa­gan­da min­ister Jo­seph Goeb­b­els believed the Games would be a huge victory for Nazi Ger­many. Inspired by anc­ient Greek drawings and Plutarch’s writings, Diem and Hit­ler saw the Nazis as the old Greeks’ rightful heirs, so the torch relay was happ­ily co-opted.

Xth Olympiad, 1936: Berlin The Berlin Games began with torch­bearers relaying the flame in Aug. It took 12 days, begin­ning with the flame ceremony in Olympia and passing through 7 partic­ipating nations. c3,330 runners brought the flame across 3075 ks.

C20th Olympics torches protected the flame from the weather, so Ger­man arms manufacturer Krupp de­signed the 1936 steel-clad tor­ches with a magnesium-burning el­em­ent. Olympic run­ner Fritz Schil­gen held the torch up on entering Berlin’s Stadium before 100,000 spectat­ors, selected bec­ause of his Aryan looks. There was wide German media cov­erage of the relay, and dir­ector Leni Rief­enstahl filmed it.

The Games were cancelled until 1948. Examine the Washington Post from 1948.
XIVth Olympiad, 1948: London. Despite Nazism, UK Games embraced the ritual. Greek Corp­or­al Konstantin Dimit­relis laid down his arms & uniform, then took the torch. The relay took­ 12 days for 1,416 runners to go via 7 countries!

XVth Olympiad, 1952: Helsinki For the first time the flame was trans­ported by airplane from Ath­ens to Den­mark with cel­eb­ratory stops in Munich and Dussel­dorf. The flame went with runners, riders, cyc­lists and sailors to Sw­eden then Finland, taking 13 days to travel 7,870 ks.
XVIth Olympiad, 1956: Melbourne The flame was lit in Olympia in Nov, and taken to Athens. The flame was flown to Aust­ral­ia, with cel­ebr­at­ions being held in Calcut­ta, Bang­kok, Singap­ore, Djakarta and Darw­in. The 20,470 ks relay took 21 days and 3,118 run­ners to reach Melb­ourne.

XVIIth Olympiad, 1960: Rome The 2,750 ks relay began in Aug. The torch was run from Olympia to Athens to the Port of Zea, where the flame was taken by ship to Syrac­use Italy. Then the runners completed the relay to Rome. 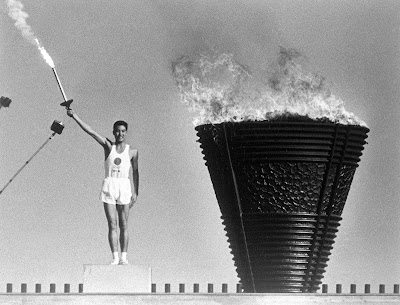 The last relay runner in Tokyo 1964
after lighting the cauldron
XlXth Olympiad, 1968: Mexico City After Olymp­ia and Athens, the flame was taken to Genoa on a Greek de­s­t­roy­er, t­rac­ing Col­umbus' route to the New World. At Vera Cruz it came ashore and after the 2,778 torch­bearers across the 13,620 ks relay, the first woman lit the cauldron!

XXth Olympiad, 1972: Munich In July the flame was lit in Olympia and travelled to Munich. Over the 5,399 ks relay via Aus­t­ria, runners were joined by cyclists, horse riders and wheelchair athletes.

XXIst Olympiad, 1976: Montreal The flame was passed to 1,200+ torch­bearers. It was transferred to a sen­sor, which transmitted elect­rical impul­ses via satellite, light­ing the flame by a Can­adian laser beam.

XXIInd Olympiad, 1980: Moscow The Torch Relay started in June and lasted 31 days. The 4,915-ks journey fol­lowed the route of the 1936 Torch Relay through Greece, Bulgaria and Romania, then the USSR.

XXIVth Olympiad, 1988: Seoul In the Athens ceremony, music­ians played traditional Korean music. The flame trav­el­led by plane from Greece to southern Korea, then through all of Korea's and historical areas. c1,900 runners, horses and boats shared in the 15,250 ks long relay.

XXVth Olympiad, 1992: Barcelona In June the flame was lit at the ancient site in Ol­ympia, then journeyed from the Panath­enaic Stadium in Athens and was taken to an ancient Greek colony in Spain. The Relay took 43 days, and covered 5,940 ks, by runners and some cyc­lists. 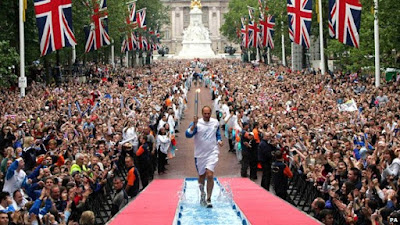 Thousands of people cheer on the torch
relay runners, London 2012
Posted by Hels at 10.8.21

Because the relay links people along the route in peace and friendship, it overrides the relay's origins in Nazi Berlin in 1936. The doves, introduced after the Second World War in London, were another symbol of peace.

Hello Hels, Hearing about the torch traveling by plane, I can't help but think about a comedy skit about trying to get the burning torch past airport security. The symbolism may have been intended to invoke international peace and goodwill, but the games themselves have constantly proved the opposite, involving themes of dominance, drugs, arguments, and bad will. Of course this does not completely characterize the Olympics, but that type of controversy is never too far away.
--Jim

I love the ideals of the Olympics. I know there are problems in trying to achieve them but we should always strive to get there.

Ancient Greece was not only the source of the modern Olympic Games, but also a lot of other things; the birth place of democracy, of philosophy, western medicine,drama mythology etc..
Now, Greece is just another country, depending economically on external aid.

If I had been a British Official designing the first Olympic Games since the Berlin Games back in 1936, I would have had nothing whatsoever to do with Nazi symbolism. But because Londoners embraced the relay torch ritual in 1948 so happily, subsequent Games probably didn't even remember the connection to Berlin.

Live doves were actually released at each Games from post-WW1 in Antwerp 1920 until those held in Seoul in 1988.

The symbolism was definitely intended to invoke international peace and goodwill, and although I agree there were drugs and some very bad will between nations and individuals, the Games were largely great successes. By the way, we are also familiar with dominance and control being issues in _non_sporting competition between nations eg trade, religion, currencies, tourism etc etc.

I used to think of the Olympic motto from Baron de Coubertin was simply Faster, Higher and Stronger. But the International Olympic Committee says the three values of Olympism are Excellence, Friendship and Respect. They constitute the foundation on which the Olympic Movement builds its activities to promote sport, culture and education .. to build a better world.

I had no classical education whatsoever but I know that until the turn of the 20th century, all good universities had ancient Greek and Roman programmes that emphasised history, literature, language and often philosophy. Graduates had exactly the intellectual skills you are mentioning.

Peace wasn’t the only theme in the 2016 Rio Games. It opened with an artistic spectacle to showcase Brasil's culture and history, and was also dedicated to the themes of environmental conservation, climate change and multiculturalism. Very special!

Hi Hels - I didn't know anything about the history of the torch ... but I enjoyed the 2012 one around Britain - it actually came through Eastbourne, but I was unable to get down to see it. Thanks for this - Hilary

I think there is something wonderful about participating in the Olympic Games, even if it is just standing on a street and clapping the torch relay as it goes past. I remember seeing Prince Philip being driven into the MCG prior to the opening ceremony, so that he could open Melbourne's Olympic Games (Nov 1956).

'76 in Montreal sounds very cool and high tech for then.
Australian athlete Ron Clark in Melbourne being burnt by the flaming torch in 1956 is to note.
I wish you had continued on to 2021 but nevertheless, nice work.

The Modern Olympic Games have been totally important for all the world to view, in person if possible or on film or tv. And countries spent untold squillions to ensure their Games were the best ever (Rio US$11 billlion; Tokyo US$15.5 billion)!! The more high tech the presentations, the more famous the ceremonial cauldron lighter, the more participating nations, the more exotic the sporting stadia.. etc... the better.

In 2012 the Olympic flame passed about 50 metres from Chez Bazza! We watched it with a group of about 12 friends and then returned to our house for an Olympic Bagel breakfast. It's a wonderful tradition and I enjoyed your history of it.
CLICK HERE for Bazza’s mostly meritocratic Blog ‘To Discover Ice’

as passionate as people become before and during each Olympic Games, I didn't think the 2020 Games would go ahead (correct) and the 2021 Games would definitely not go ahead (wrong). Lots of other national and international programmes were cancelled, and I assumed athletes were even more at risk than other citizens - lots of overseas travel, skin-to-skin contact, not enough sleep, heat exhaustion etc etc.

Thank goodness all the rituals and events went ahead safely and with joy.

I can’t help remembering the spectacle of the torch at the Sydney Olympics, carried into the stadium by famous women of Australian athletics - Betty Cuthbert wheeled in by Raelene Boyle, with the likes of Shirley Strickland, Dawn Fraser and Debbie Flintoff-King, and finally, Cathy Freeman, smiling radiantly as she lit it to the cheers of the crowd. At school, all our “houses” were named after athletes(mine, Landy, was the only one named for a man).

I hadn’t realised the Nazis started the torch relay.

Sue
I think Australians loved the opportunity to participate in, and lead the Sydney Games because it illustrated our most cherished values: healthy outdoor lifestyle; passion for sport; respect for our heroes; mateship etc.