A Scandal in Bohemia by Gideon Haigh (Hamish ­Hamilton, 2018) tells an incredible story.  Mollie Dean (1905-30) was a very attractive Melburnian, a young woman who had great plans for the future. Many men said she was an excep­t­ional person, with great vital­ity and was a good conversation­al­ist. Women (like playwright Betty Roland) said Mollie was sul­try or sullen-looking. Everyone agreed she was slim with dark bobbed hair and simple makeup. And that she was forceful and Bohemian, wanting to energet­ically discuss art, culture and pol­it­ics with the males. Clearly Mollie was a rising star, writ­ing a novel that would be call­ed Monst­ers Not Men.

Mollie’s family was already problem-filled. Her father George, a tough school prin­cipal, died during her childhood. Her mother Ethel Dean was manipul­at­ive, controlling and physically violent. Ethel had just one plan for Mollie: to quickly marry her off, to a specific groom - mechanic Adam Graham (the Deans’ lodger in Elwood in 1921). 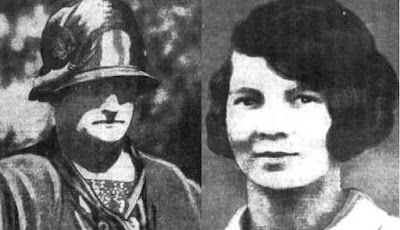 But Mollie was talented and Adam Graham was not. She was a special education teacher in North Melbourne, and by her early 20s had won lit­er­ary awards at Teachers’ College. So in­stead of going out with the very boring Adam Graham, she social­ised with George Browne, Vice-Principal of the Teachers’ Coll­ege, comp­oser Hubert Clifford and law student Geor­ge Sell.

Mum Ethel apparently did not know about Molly’s dearest lover, Colin Colahan (1897-1987). After all,  Colahan was safely married and was therefore "out of Mollie’s reach".

Mum Ethel upped her violence, stalking­ Mollie with Adam Graham, and confronting Browne, Clifford and Sell to  herher expr displeasure. Once, when Clifford returned Mollie to the front gate, Ethel dragged her daughter in­side by the hair. Mollie later apologised!!

In Nov 1930, late on her 25th birthday, Mollie arrived at St Kilda rail­way station. At midnight she found a public telephone box to contact Colahan at home in Hawthorn to discuss leaving her teaching job in favour of journal­ism. Colahan told her that any hurried dec­ision would be fool­ish! Anyhow... the call caused Mollie to miss the last Brighton tram at 12:11am, so she walked the 2ks home.

Some witnesses saw Mollie sitting outside the St Kilda station and not­ic­ed a be-suited man, walking with a peculiar gait, watching her. Others saw her being followed by the same man as she ent­er­ed her own street. But they did not see her as she was brutally bludg­eoned from behind, dragged into a laneway, killed and mutilated. On the foot­path outside her front gate, the police found a pool of blood, her hat, coat, handbag and book. Dean was rushed to hospital, but died from haemorrhage.


This murder came straight after another shock­ing and unsolved tragedy, the murder of 11-year-old Mena Griffiths in Nov 1930. Her strang­led body was found in a derelict house in Ormond. Then another murder, 16-year-old Hazel Wilson, followed six weeks later. Sinister! 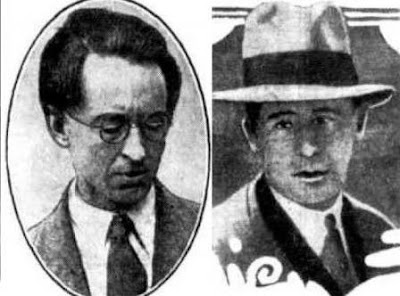 At the coronial inquest (Jan 1931) re Mollie Dean, endless sensations were revealed. Att­ention foc­ussed on Molly’s personal life, her appal­l­ing mother Mrs Ethel Dean, and her mother’s dodgy relat­ion­ship with young Adam Graham. The police noted that Adam Graham had a peculiar walking gait; her blood was found on his suit; and that mum Ethel strongly obj­ec­ted to Mollie’s bohemian, arty friends.

Witness statements coll­ected during the police investigation and placed in the Public Record Office Vic­tor­ia were examined as part of the coroner’s briefing notes. The coroner Mr Grant agreed with the police, and found that Adam Graham had malicious­ly inflicted the injuries.

Six years later a completely unconnected man confessed to the killings of  teenagers Mena Grif­fiths and Hazel Wilson, so even Mollie’s old colleagues lost interest in Mollie’s murd­er. Some of her friends left Aus­tralia and others got busy dev­eloping Vict­or­ia’s art colony Montsalvat in semi-rural El­tham. Mollie's case faded. 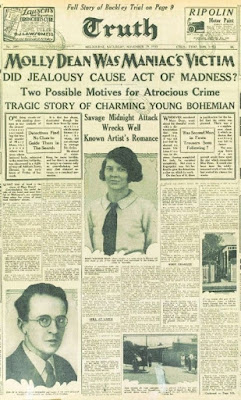 Colahan was a loyal follower at the studio of famous tonal artist Max Meldrum, promoted in The Bullet­in by Mervyn Skipper, and by Betty Rol­and and Sue Vanderkelen in their cultural salons. Even one day before her death, Colahan was completing a lovely and fresh nude of Mollie folded into an armchair. The painting, called Sleep, was on Colahan’s easel as she was being murdered.

Lena Skipp­er, who with her husband Mervyn Skipper and others found­ed the famous art colony Montsal­vat in the 1930s, wrote of Mollie in a detailed diary. And play­wright Betty Rol­and featured Mollie in her history of the Mont­salvat circle. Luckily handwritten let­ters from Mollie survive in the State Lib­rary of Victoria.

For decades Australians have read the novel My Brother Jack (1964), George John­ston’s story of inter-war Melbourne. Yet few would have rec­og­nised that the plot aped this true murder story of 25-year-old schoolteacher, novelist and Bohemian Mollie Dean, mistress of artist Colin Colahan. The author George Johnston never met the victim; only 20+ years af­ter the ev­ents did he become close to the sociable Colahan and Johnston’s famous wife, Charmian Clift. The novel was then serial­ised for the ABC in 1965 by the very same Charmian Clift. Finally Colahan’s work appeared in Misty Moderns, a 2008 National Gall­ery of Australia touring exhibition; the cat­alog­ue’s chronology noted her murder VERY brief­ly. 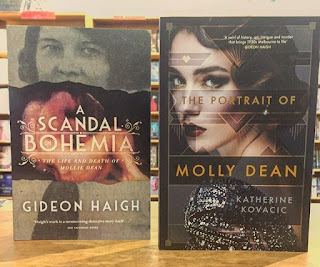 Why did Mollie Dean's life virtually disappear from Melbourne's art-world history? Perhaps Max Meldrum and Colin Colahan belonged to Melbourne’s very cliquish artistic circles and these proved too cliq­uish for poor Mollie Dean. Or perhaps she was just too assertive for a young woman. Fortunately her story is now being re­ass­ess­ed in a new novel (Katherine Kovacic’s Portrait of Molly Dean, 2018).

I heard Gideon Haigh talk about his book on Radio National one Sunday morning, didn’t know about the other one, I was particularly intrigued because that dreadful murder happened right around the corner from where I live! Who would have thought so much drama once happened in those peaceful Elwood streets?

Fascinating story. It is a long time since I have read My Brother Jack, and the associated books. Things were certainly difficult back then for round pegs who would not fit into square holes.

The art colony in Montsalvat in time became a beautiful place to live, work and socialise. No wonder Mollie's mother despised her daughter's Bohemian friends.

Hello Hels, It seems that there was weak motive for Ethel and Adam to actually go to the degree of murdering Molly Dean, especially since with Molly gone Adam could certainly not have married her. The peculiar remarks made about Adam and about Molly's mother make me wonder if there is not more to the case--financial aspects and so forth.
--Jim

What a rich, cultural era this was. Katherine Susannah Prichard was another mentor, role model and salon hostess.

not only was your suburb a lovely part of Melbourne, but Mollie Dean was an educated young woman in a respected position. Thus you would not have expected a brutal murder locally, nor would you you have expected the police/courts to have pursued the murder with less than complete commitment.

88 years later it is still a blotch on Melbourne's crime history.

My Brother Jack refers to many events, and if you had not heard of Mollie Dean, there is no way you would have detected the references. However the Gideon Haigh and Katherine Kovacic books are right on topic.

Square pegs and round holes was apt then as it is now, yes. Mollie Dean could never meet her mother's expectations, nor could she be an equal with the men in her cultural and social world.

when Justus Jorgensen returned home from Paris and London in the late 1920s, he wanted to work, teach, exhibit and socialise in an open, green part of outer Melbourne. Although the main buildings and gardens were not completed until after Mollie Dean's death, the idea of establishing perfect conditions for a creative art colony was already very popular.

Mrs Ethel Dean hated the Bohemians, disapproved of artists having sex before/outside marriage and believed her daughter needed to be firmly under her control in the family home.

I have no doubt that Adam Graham did what he was told to do, but that Mrs Ethel Dean had to take responsibility for the murder of her daughter. The Australian (14/4/2018) cited the police records that were very telling about Ethel: Ethel’s reaction to her daughter’s assault ranged from hostility to indifference. “So far as I am concerned you can let the matter drop. If I did anything to my daughter to bring about her death, I cannot remember doing it”, she told detectives.

Not proof of course, but it made me very uncomfortable.

Correct. Melbourne's many art schools contributed to the city's reputation as an art centre. In the 1930s, an alternative to the National Gallery of Victoria under Bernard Hall, was run by George Bell, who was more open to Modernism than was Max Meldrum. Among his pupils were Russell Drysdale and Fred Williams. Bell became president of the new Contemporary Art Society in 1938, a counter society to the conservative Australian Academy of Art.

The same would be true about Melbourne being a centre for literature during the inter-war era. Just reiterating the women's names we already know is an impressive start: Miles Franklin (b1879), Katharine Susannah Prichard (b1883), Christina Stead (b1902), Dymphna Cusack (1902), Betty Rol­and (b1903) etc

The veneer of civilisation that covers us is shown to be very thin sometimes. There was a famous murder, near where we were living before our present address, that was unknown to the modern world until a serialised TV drama.
Sometimes the real horror that people are capable of can be brought home to us with force; probably at a similar time - that was a love triangle but Mollie's demise seems to have been much more sinister!
CLICK HERE for Bazza’s concinnituous Blog ‘To Discover Ice’

Interesting, isn't it? In every case, there was always a reason for murder. Even in countries where guns were illegal or difficult to get, angry or jealous people could always use a knife, a fast car, poison or some other weapon. No screams were heard by the many witnesses, so either the victim knew her murderer and was not frightened, or Mollie Dean was smothered without time to scream. Surely the pathologists would have made sense of her dying from shock, haemorrhage and collapse of the lungs.

But I am horrified (still) that a lovely and talented young thing, with her entire life ahead of her, could be so callously ignored in the days and years after the murder. I agree, the veneer of civilisation that covered us back then was shown to be very thin indeed. And still is?