Back in 1970s, I read each winner of the Booker Prize for Literature, written in a British country. Bernice Rubens, Nardine Gordimer, Penelope Fitzgerald, Thomas Keneally, Anita Brookner, Penelope Lively, Peter Carey, A.S Byatt and Ian McEwan were deserving winners. Then Julian Barnes in the 1980s! 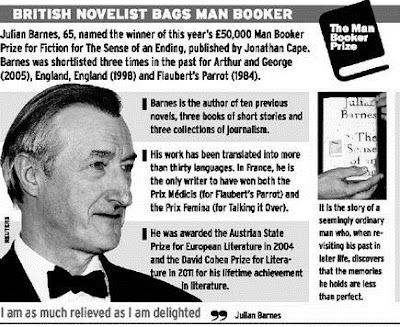 Barnes won the Booker Prize in 2011

Barnes (b1946) graduated from Oxford in 1968, and wrote reviews for the Times Literary Supplement. He worked on the Oxford English Dict­ionary, then moved to Lond­on to read for the Bar. His could have become a good sol­icitor, but Barnes felt self-conscious and avoided courtroom theatrics. So he turned to writing.

An important event in young Julian Barnes’ life was his rel­at­ion­ship with a much older woman, Laurien Wade. Barnes met Wade back in 1965 when he had a temporary teaching job at her father's school in Northwood. In 1977, at 31, he joined the New Statesman as ass­istant lit­er­ary editor under Martin Amis. And it was through Amis that he became part of the ruling literary elite for decades eg Ian McEwan, Salman Rush­die and Christopher Hitchens. Still shy, Barn­es was able to hold his own at these gatherings using delicious irony. McEwan & Amis had already published novels and were confidently waiting for Barnes to catch up.

In 1979 he happily married the literary agent Pat Kavanagh. And soon began writing and pub­lishing crime thrillers under his pseud­onym Dan Kavanagh.

The first novel published under Barnes’ own name was the coming-of-age story Metroland (1980). It was a clever acc­ount of the life of pretent­ious Christopher Lloyd, who was sucked back into the sub­ur­ban life he’d earlier rejected. A pair of impossibly intellectual, pretentious teen­agers swanned round London, mocking the bourgeois.

Jealous obsession caused the hero of Before She Met Me (1982) to scrutinise his new wife’s past. When Graham left his wife for the beaut­iful Ann, his life was improving. Then he suffered retro­sp­ec­tive jealousy, envying Ann’s hunky lovers from her old film career.

Flaubert had been Barnes’ greatest hero. So Flaub­ert’s Parrot (1984)  was a clever mixture of bio­graphy, fict­ion and literary criticism; an eccentric lit­erature prof­essor became ob­sessed with Flau­bert and with the stuffed parrot that Flaubert used as inspir­ation in his short story. This was the novel that made Barnes’ name!

Read Barnes’ A History of the World in 101/2 Chapters (1989). Lawrence Beesley, famous Titanic survivor/author, appeared as a character in this novel/essay that ranged from Noah’s Ark to mediev­al France, Arab terr­orists and Géricault’s paintings. A very smart novel that I loved.

In the satirical England, England (1998), Barnes had a go at modern England via a theme park on Isle of Wight, complete with the royal family, Tower of London, Robin Hood and pubs. A wonderful book.

Critics thought Barnes was maturing in The Lemon Table (2004), a collection of short stories in which most of the characters were death-oriented. Then he continued to explore death in his historical novel Arthur & George (2005) which I loved. It was based on the true story of an early C20th solicitor accused of maiming cattle, and saved by the intervention of Sir Arthur Conan Doyle.

Julian’s wife Pat sudden death from brain tumour in 2008, a great crisis for Barnes - he suffered a long mourning that he called the dark night of the soul. This may have become darker still, when Laurien Wade died a year later. 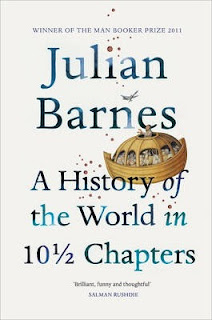 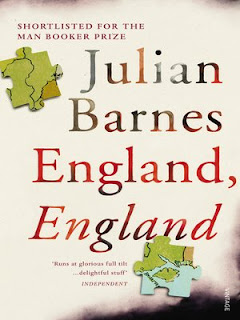 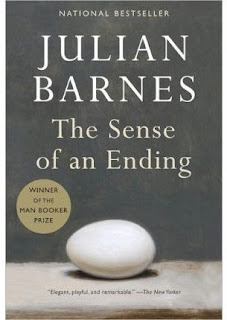 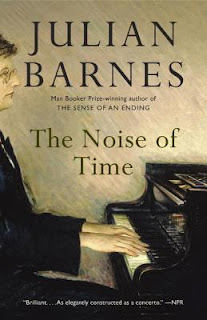 
In 2011 Barnes published Pulse, a collection of short stories, and The Sense of an Ending (2011). "Ending" was a prize winning novel that used an unreliable narrator to explore memory and aging. Perhaps Wade’s death freed up Barnes to write about their friendship because The Sense of an Ending dealt with a young man’s affair with a much older woman. Barnes’ newly refreshed wisdom and thoughtfulness certainly shone through.
The next title came from Soviet poet Osip Mandelstam who chose it for his own horrific 1923 memoir. The Noise of Time (2016) fictionalised events from Russian comp­os­er Dmitry Shostak­ovich’s life, beginning with the composer enduring the humiliation and misery of his exclusion from musical life, in 1936. The story continued as Shostakovich struggled to live a life devoted to music, with ugly history interrupting.
The Only Story (2018) explored memory and first love when a man, Paul, looked back on his relationship with an older woman, Susan. As a teen, Paul had an affair with a middle-aged woman. The relat­ionship lasted through his university years and into adulthood. She moved from her family home and bought a house in Oxford to live together, and to meet his friends. Susan’s amused irrever­ence towards middle-class pursuits was a quality that presumably came from Laurien Wade’s real-life ironic sense of humour.

Barnes became a critical and popular success, beneficiary of a special moment in literary history. In the 1980s literary fiction became fashionable in a way that it has never been before. Barnes had his first Booker Prize short listings (Flaubert’s Parrot in 1984; England, England in 1998; and Arthur & George in 2005). He finally won the all-important Booker for The Sense of an Ending in 2011.
I haven’t read Barnes’ nonfiction work, written since 2000. Perhaps explore Some­thing to Declare (2002) on French culture; Pedant in the Kitchen (2003) on cooking; Through the Window (2012) exploring his lit­erary influenc­es etc.

Barnes had three excellent novels nominated for the Booker Prize, but by the time he eventually won the Booker, I had moved on. I wonder if his appeal was mainly to baby-boomers.

Hello Hels, I am happy to take your personal recommendation to read Julian Barnes, and in fact I am now adding him to my list of authors to search for, but please don't back up his qualifications with that Booker prize. I have been bitten too many times by prize-winning authors, and especially the Booker prize. This was once awarded to the single worst book I ever read, Arundhati Roy's The God of Small Things. This vulgar book was so awful that it made me want to do violent things, such as throw it against a wall, in between the bouts of nausea it induced.
-
I love getting recommendations for books, just not from prize committees, who are often motivated by factors other than readability and writing quality. You once recommended The Hare with Amber Eyes to me, and I enjoyed that book from beginning to end, and have since quoted it and recommended it to other people. My favorite form of reading is essays, so I will probably start with those non-fiction volumes of Barnes'.
--Jim

I haven't read any of his works but he does sound like an interesting writing with a lot to say.

do you read novels in their original languages, or only when they are written or translated into Portuguese? If you read Julian Barnes in translation, for example, can you enjoy the fine details of his characters and stories?

I speak Hebrew perfectly well in day to day usage, but I prefer to read Hebrew novels in English so that the experience will be all pleasure and no struggle.

I too am a baby boomer so I too was doing my exploration of world literature in just the right time: 1965-1990. But it hadn't occurred to me that I liked Barnes because we were born at the same time and shared the same world experiences. Flaub­ert’s Parrot and A History of the World in 101/2 Chapters, for example, greatly appealed to me. And you too, it seems.

you are quite right about showing that formally declared prize-winning authors don't necessarily produce the best-ever novels. But I was young and impressionable back then, and I really did enjoy Bernice Rubens, Penelope Fitzgerald, Anita Brookner, Penelope Lively and Ian McEwan.

Once I became a full-time academic in 1991, my days of leisurely novel-reading were over. And I even stopped going to Book Club meetings. So blogging was important for me, too.

I always knew Julian Barnes was not Australian nor has he visited here very much. But he has a way of writing that Australians immediately warm too - full of irony, satire and sharp wit, deflating any attempt at pomposity. Perhaps try your hand with Arthur & George.

Hi Hels - I've never read any of Julian Barnes' novels - and must redress that - now I can check them out from the library. You make a good point about the Booker Prize - and I think I must spread my wings and give them a try ... thanks for that thought - Hilary

I immediately acknowledge that our literary tastes change, according to:
*who sets the reading list (eg the literature teacher in high school),
*which decade we did the reading in (eg teen years, in the Women's Liberation Decade, post-retirement etc) and
*which cultures we are particularly interested in (eg British, Russian, medieval etc).

Now I am almost retired, I wondered if re-reading much loved novels from another era would be as satisfying as it was originally.