Who could reduce the chaos of racist, pro-Fascist KKK - only Superman! 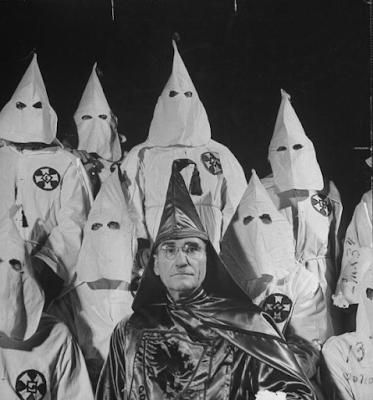 KKK and leader, 1946
American racist organisations were well documented since the start of the Ku Klux Klan. But the situation in the inter-war years was tot­ally unexpected. The Friends of New Germ­any, supported by New York’s German consul, were largely naturalised Ger­man emig­rants based in NY. The Friends was a small group that exist­ed into the mid-1930s, attacking Jews, Communists and the Versailles Treaty.

German Fritz Kuhn (1896-1951) emigrated to the USA in 1928, joined the Friends of New Germany and quickly became leader. When the Friends ended, he un­d­erstood that the only way for a pro-Nazi move­ment to suc­ceed in the US was with an organisation based on Amer­ican citizens of German Protestant des­cent. The German-American Bund took over in 1936, its members “representing loyal, pat­riotic Amer­icans who were strength­ening their ad­opt­ed home­land, prot­ecting it from Jewish, Communist and black cul­tural infl­uences”. They urged US neut­ral­ity in European aff­airs and at Bund rallies, Am­erican flags an­d swas­t­ikas flew; both national anthems were played.

The Bund’s most publicised rally was at Madison Square Gar­den NY in Feb 1939. In front of 22,000 fanat­ical sup­porters, Kuhn delivered a rousing speech, decry­ing the USA’s suic­idal tol­erance of paras­it­ical aliens. Kuhn condemned Pre­s­ident Roosevelt, call­ing his New Deal the Jew Deal and crit­icising Bolshevik-Jewish American leaders. Outside was a huge crowd of anti-Nazis, protest­ing loudly. The 1,500 police on duty were ord­er­ed to remove all anti-Nazi signs!

WW2 broke out in Europe etc in Aug 1939. The Bund was offic­ially disbanded days after the bomb­ing of Pearl Harbour Harbour Dec 1941 and the USA’s own declaration of war. By the time the USA join­ed the war, I assumed Nazism would never raise its ugly head in the USA again.

WRONG! Other pro-Fascist org­anisations continued to promote the Nazi values vigorously. The old Ku Klux Klan and the newer Christian En­for­cers found common ground with the anti-Semitic, white-supremacist ex-Bundists, sharing rall­ies. And Wesley Swift moved to California as a Ku Klux Klan organiser and rifle instructor. He found­ed his church and became the West Coast repres­ent­ative of the Christian Nationalist Crus­ade. Swift also hosted a daily radio programme, broad­casting that “Aryans were God's chosen race and that non-Caucasians could never be saved”.

And after the war, who was responsible for funding, publicising and org­an­ising the anti-Black, anti-Semitic riots at a Paul Robeson concert in Peek­skill New York in 1949? The Ku Klux Klan! Despite the most trag­ic world war having ended, the pro-Fascist mobs screamed “We are Hit­ler’s boys, here to finish his job”. The violence overflowed even to a bus of concert-goers travelling along the highway to visit Roose­v­elt’s Hyde Park home. Hundreds of Jews and blacks were hospitalised.

Clearly pro-Fascist, anti-Semitic and anti-black organisations in the USA continued to rally. The American Nazi Party’s founder and leader, George Lincoln Rockwell (1918–67), was one of the most significant ex­tremist ideologues of the post war period, con­tinued to appeal to rac­ist Americans. The Klan was experiencing a huge resurgence in the post-WW2 era; its membership was going up and its political influence was increasing. 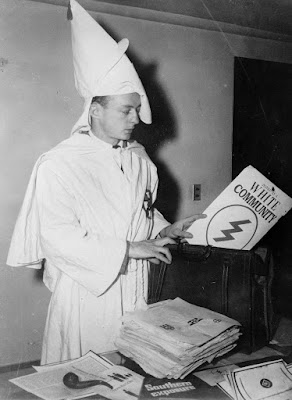 Stetson Kennedy, revealing the KKK's secret material
So a young activist writer Stetson Kennedy went undercover to in­f­il­trate the group. By regularly attending meetings, he heard the organisation's secrets. But by the time Kennedy took the inform­at­ion to the media and law enforcement agencies, the Klan had become so powerful and int­im­idating that police were hesitant to act.

Superman had been fighting crime in print since 1938. Bookriot showed that early Superman was always a left-leaning, populist rabble-rouser, and as WW1 continued, his opposition to Fascism strengthened. The series described Superman as a “champion of the oppressed,” but after a few years they added “champion of equal rights and fighter against the forces of hate and prejudice.” The characters tangled with hate groups of all stripes.

Adventures of Superman became a radio sensation in the mid 1940s when kids across the USA huddled weekly to listen. It was on the radio that Superman first developed his pow­ers, and became assoc­iat­ed with truth, just­ice and the American way. So it was no wonder that when Stetson Kennedy decided to ex­pose the sec­rets of the KKK, he looked to the superhero for insp­iration.

To share his findings, Stetson Kennedy approached the writers of the Superman radio serial. With the Nazis probably no longer a threat, the producers were looking for a new villain for Superman to fight - the KKK was a great fit! The radio episodes exposed many of the KKK's most guarded secrets and rit­uals, completely stripping the Klan of its mystique. Although the KKK was masked as The Clan of the Fiery Cross, Klan leaders were furious about the por­trayal and threatened to boycott the show's sponsor. Too late. The Clan of the Fiery Cross episodes, which got brilliant rat­ings, had exposed the hate group's practices to the general public. Could Superman reveal the KKK's hate practices?
While we may doubt that a fict­ion­al children’s superhero could single­-handedly defeat the powerful, violent racists, the Klan did suffer from decreasing recruit­ments. So thank you Sup­er­man for pitting your moral strength against those immoral KKK men in white hoods.
Posted by Hels at 20.4.21

Hi Hels - this takes some reading and absorbing ... I'll need to be back ... when I was in Canada I read 'Killers of the Flower Moon' by David Grann ... it was about the Osage being killed off ... the FBI under Hoover took up the case - completely bungling it. Historically it was very interesting ... I see they're making a film on the book/era. We need to understand the history ... thanks for posting this - Hilary

Hello Hels, I have always been proud that Superman was created in Cleveland, Ohio. However, the virulence of the KKK and similar movements in the north part of the Midwest (Ohio, Indiana, Illinois) always took me by surprise, since in many areas I didn't understand where the intense hatred originated. Luckily, the area around Cleveland, where I grew up, was always more liberal, although even Cleveland had its troubles with restricted neighborhoods and so forth.
--Jim

Have you heard of the KKKids? Was Kennedy thinking that the young KKKers might have been influenced by children's cartoons and radio serials, at least more than their parents were.

thanks for the 1920s link, which I didn't know about. When oil was found beneath their lands, the Osage Indians became some of the richest people. But one by one, someone began to kill them off. Grann goes into exact details of the gruesome conspiracy by white men overcome by greed and driven to murder Native Americans. The newly formed FBI rises to the occasion to tackle the increasingly gruesome case.

So there are several important connections with my post: were the Ku Klux Klan involved because of race hatred? Were the Osage Indians killed because of white greed? Were the FBI "compelled" to investigate, against their will?

We really do need to understand the history.

Thank you. If the virulence of the KKK etc in the north part of the Midwest always took you by surprise, you can imagine the surprise that non-Americans reading the history have to acknowledge. I didn't even realise the importance of California during the inter war era, and after WW2.

Interesting point! The KKK was originally a Southern, racist organisation in the C19th Reconstruction Era, for rugged men only. By the 1920s, the involvement of women and children was intentionally followed to create a nation of true believers who would ensure a purely white, family-oriented race.

But sofar I have not seen any connection in the history journals between Ku Klux Kiddies and use of children's radio programmes.

Well, isn't that interesting about Superman. Propaganda for the good, really.

agreed totally! I clearly have a lot more reading to do.

what is bizarre about this story is that Nazism, racism and Fascism was clear for the entire world to see during WW2!!! Yet in 1946, Superman supposedly revealed the KKK's most guarded secrets and rit­uals for the first time, ripping away the Klan's racism etc. I know that rusted-on KKK fanatics would never change, regardless of the propaganda, but I am delighted that other people paid attention.

I did not know the influence of KKK was so far reaching. Propaganda appears where you least expect it. Well done Superman creators.

the influence of the KKK spread across the US's southern states very quickly, so the question was when, and how successfully did the KKK influence spread more widely across the rest of the nation?

Even more shocking was when Nazis in Germany admired the Jim Crow-era laws that discriminated against Black Americans, and wanted to introduce those segregation laws into Germany. In particular the Germans copied the American laws that influenced 1] the citizenship portion of the Nuremberg Laws, 2] the anti-miscegenation laws which prohibited interracial marriages in many US states and 3] America's eugenicist laws.

When I came to American prep school at 16, I was baffled by nativist student stories abt the Jews plotting X or Y. At age 19 I worked at a pizza place and daily debated my John Birch Soc. boss. The masked men in Huckleberry Finn were colonial mercantilists trapped by their own system. In "White Cargo" it turns out there American colonial slaves were white. Black slaves arrived by accident and as soon as Irishment taught them lock-picking and firearms, slavery became segregated. The Klan revived when Wilson was elected and DW Griffith filmed Birth of a Nation. Klanbakes became controversial among Dems and the Empire supported Hoover's 1928 campaign. OF COURSE these dummies fell in with National Socialists, but the end came with Superman look-alike Elmer Irey's Internal Revenue Bureau. The Klan in 1944 was billed $685000 for profits in the 1920s and disbanded April 28 of that year. National Socialists evidently decided altruism was inherited and Jews were born without it and didn't love Jesus. Their entire empire was weaponized altruism gone amok. Collectivist movements seem easy prey to self-deception.

many thanks for your detailed response. I was with you until, and including President Wilson's elections (1912 and 1916), the huge success of the film Birth of a Nation (1915) and American participation in WW1 (1917-8).

But the inter-war era was so damaged by the Great Depression from 1929 on and then the rise of Nazism in Europe, I would have expected the KKK to hide away for ever. Perhaps KKK members didn't disappear but concentrated instead on organisations like The German-American Bund, or on pursuing Jim Crow laws.

The third incarnation of the KKK clearly suggested that no-one was going to get rid of the KKK. It grew rapidly after 1954, specifically as a response to the Civil Rights Movement.

It is interesting that in Australia too fascism got a bit of an outing especially among return soldiers of WW! who had suffered in the depression . Gerald Stones book 1932 is aa good Read on this era in Australia