The most famous artists' colony in Paris - La Ruche

In art, lit­erature and music, Paris had long been the home of the avant-garde and by 1900, the city was still dominant. The ambitious 1900 Intern­ational Exhibition only reinforced Paris’ importance. Some of Paris' most noted structures were built for the 1900 Fair, including Gare de Lyon, Pont Alexandre III, Grand Palais and the Petit Palais. The Paris Metro began operating to coincide with the Fair, and Gare d'Orsay/now Musée d'Orsay, opened in May 1900.

Eventually the hub of artistic creativity moved across Paris from Mont­martre (18th arrond) ..to Montparnasse. Pablo Picasso, for example, was irritated by an influx of tourists who were crowding the cafes his neighbourhood. So he moved out of his Montmartre studio, and moved across the Seine to Montparnasse on the Left Bank.

Many of the newly arrived artists lived in a rotunda called La Ruche, an art­is­ts’ colony in Montparnasse (15th arrond.) that was born from the gener­osity of the famous and wealthy sculp­tor Alfred Bouch­er (1850-1934). 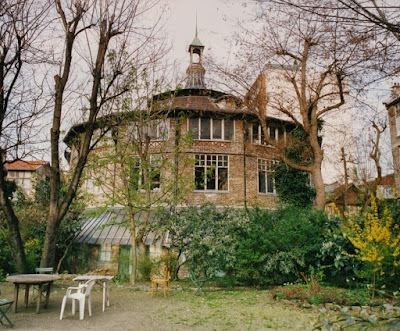 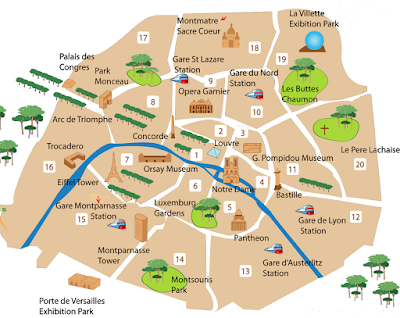 Paris' arrondissements
Montparnasse in the south
(press to expand)

Then other workshops were erected next to the rotunda, in the gardens. Inside, La Ruche had 140 bedroom-cells and light-filled work­shops. A large salon that served as an exhibition space for the artists opened in 1905. Ruche des Arts theatre was erected in the central garden.

Sculptors and painters arrived from across Europe. Rents were low, and even then, Boucher was patient when an artist could not pay. Some were French eg Fernand Léger; most were migrants from Eastern Europe eg Ossip Zadkine, Marc Chagall, Jacques Lipchitz, Pinchus Kremegne.

In 1908, the year Cubism began, Fernand Léger moved into La Ruche, and there he soon found himself in the centre of avant-garde art cir­cles. Léger soon got to know the artists Robert Delaunay, Marc Chagall and Chaim Sou­t­ine; Jacques Lipchitz and Henri Laurens; and the poets Guil­laume Apollinaire and Max Jac­ob.

As a Lithuanian scul­ptor, Jacques Lipchitz (1891-1973) was fasc­in­ated by the possib­il­ity of presenting an object from many view­points. He moved to Paris in 1909 to study at the École des Beaux-Arts where he was soon impressed by Cubism. In 1920 Lipchitz held his first solo exhibition at Rosenberg's Galerie L'Effort Moderne. 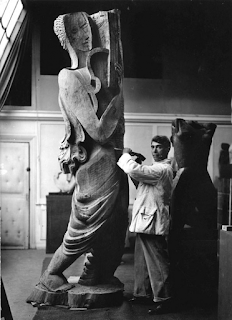 In 1909, Amedeo Modigliani (1884-1920) was in Paris, renting a studio in Mont­parnasse. Paul Guillaume was an ambitious young art dealer who took an interest in his work and introduced him to sculptor Constantin Brâncuși. Modigliani's great sculptures were exhibited in the Salon d'Automne of 1912. He visited La Ruche reg­ularly and painted a series of friends’ portraits: Chaim Soutine, Moïse Kisling, Pablo Picasso, Diego Rivera, Juan Gris, Max Jacob and Jean Cocteau.

Marc Chagall from Belarus moved to Paris in 1910. He lived on coffee and poetry read­ings from his equally imp­o­v­erished neigh­bours. And he painted all night. In the days, he took any jobs to survive. Like the other penn­il­ess painters, sculptors, writers, poets and composers from Eastern Europe, Chagall thrived in the creative at­mos­phere and cheap rent of La Ruche. Living with­out running water, in un­heated studios, he sold his works for a few francs just to buy food. Most of Chagall’s neighbours at La Ruche were Jewish, often fleeing the pogroms of Central and Eastern Europe. So no matter how tough their lives were, at least they could keep homesick­ness at bay by socialising in Yiddish.

In time Chagall came to feel that Cubism lacked poetry and colour. He light­en­ed his palette and made his work more express­ive, harm­on­ious, unif­ied. Self Portrait with Seven Fingers 1913, still show­ing clear cubist influences, was more fan­t­asy and less portrait. Painted at La Ruche with its bare floorboards, Chagall painted a Russian scene with an improb­ab­le Eiffel Tower through the window.

Lithuanian Michel Kikoine (1892-1968) moved to Paris in 1911 and studied at l'Ecole Nat­ionale Superieure des Beaux Arts. He moved into La Ruche, where he met the other mem­bers of the School of Paris. Kikoine’s discovery of the French landscape allowed him to achieve a new personal style, a synthesis between Russian landscape trad­it­ion and exp­r­essionism.

From 1914-9, Kikoine joined the French army as a volunteer. After the war ended, he visited southern Fr­an­ce, fell in love with its light and painted many landscapes. Kikoine was soon exh­ib­iting at Salon d'automne.

Lithuanian Pinchas Kremegne (1890-1981) was a friend of both Sout­ine and Kikoine. After studying sculpture at the Vilna Art School, he left for Paris in 1912. He got off the train at the Gare de l'Est with 3 rubles to his name and no French! On­ce settled in La Ruche, he wrote to his good friend Chaim Soutine, inviting him to Paris.

In 1913, Chaim Soutine followed his friends Pinchus Kremegne and Michel Kikoine, emigrating from Belarus to Paris where they all lived at La Ruche. Soutine studied at the École des Beaux-Arts where he developed a highly personal painting technique. 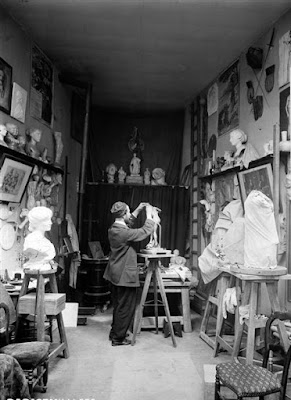 Artist Sonia Delaunay (1885–1979) was also Ukrainian, Jewish and a Yiddish speak­er, but she had one great advantage. Her wealthy fam­ily in Russia sent her money and food parcels every month, while the other young artists lived in dire poverty. The highlight of the men’s week was when Sonia Delaunay arrived at La Ruche with Russian herring and pickled cucumbers.

Diego Rivera studied art at the Academy of San Carlos in Mexico City. Then he was sponsored to study in Europe by the governor of the State of Veracruz. Rivera initially went to study in Madrid in 1907 and from there went to Paris. In La Ruche, his friend Amedeo Modigliani painted his port­rait in 1914. His circle of close friends included gallery owner Léopold Zborowski.

La Ruche was preserved and is still being used.

Read Shocking Paris: Soutine, Chagall and the Outsiders of Montparnasse, by Stanley Meisler, 2015

I've often thought that one of the old wharf buildings at Docklands could be turned into modest individual rental accommodation and studios for artists. Docklands would certainly benefit. But no, it would not be quite be La Ruche. What a place to be!

Alfred Bouch­er should be a national hero in Paris. He deserves a public holiday in his honour.

of course! The old wharf buildings at Docklands could easily be turned into individual rental accommodation and studios for all sorts of young people without a lot of money. People flock to Melbourne to study art, ballet, drama etc etc etc. As this city has always been the cultural heart of Australia, our facilities should reflect it.

foreign artists had always flocked to Paris, to study at places like École des Beaux-Arts, Académie Colarossi and Académie Julien etc in the late 19th century. They often studied for two years, then moved on to make a living elsewhere or went back home to Australia, USA etc.

But Alfred Bouch­er was heroic because he enabled impoverished artists from Central and Eastern Europe to go on to live stable, creative and successful, long term careers in Paris. There is a large plaque on the wall of La Ruche that honours Boucher:
https://www.flickr.com/photos/monceau/6143996275

Hi Hels - I didn't know any of this history (or not much) ... and was fascinated to read your post - I'd like to read more, so I could learn more ... and hope to one day - but thanks for this ... a really interesting post. Enjoyable and pointing me in many directions - cheers Hilary

Hello Hels, That is a cool building and project that I did not know of. Are there any photos of the original structure before rebuilding?

By the way. for your collection, here is a site in English listing some artists' colonies in Taiwan repurposed from old railway buildings and the like:

There is a lot of public art in Taiwan.
--Jim

I didn't know much about Montparnasse at all. But I had been following the lives of Soutine, Kikoine, Chagall and the others for years and voila, they all ended up in La Ruche!

It must have been an amazing and supportive home, albeit a bit squashy and smelly :)

Thanks for the artists' colonies. That is information that I would never find myself.

I will add a map of Paris' arrondissements, extending from the first centre of artists, Montmartre (in the north), to the later centre in Montparnasse (in the south).

Very nice blog, Thanks for sharing.

Walls Asia the Best Architectural Interior Designing Company in Hyderabad offering comprehensive Interior designing services from the past 10 years at affordable Prices as per client’s requirements. We serve all surrounding areas of Hyderabad & Secunderabad and all over Telangana.