Lord Horatio Nelson, William Wilberforce and slavery in the Caribbean

Horatio Nelson (1758–1805)’s first long sea-voyage as an adolescent boy was to the Jamaican sugar colonies of the West Indies in 1771-2. He served in the region as a Naval officer during the War of American Indep­end­ence (1775–83). This was at the very time million of Africans were being transported to European colonies as slaves.

Nelson had developed a close affinity with the planters in the Caribbean, befriending local colonists. He became a close friend of Simon Taylor, a Jamaican slave owner, and in 1787 married his wife Fanny Nisbet, daughter of a wealthy slave owner. And they all firmly believed that the Britain's booming economy rel­ied heavily on the Atlantic slave trade. 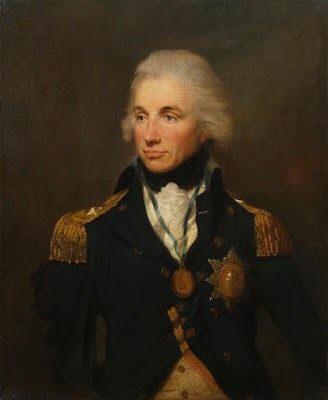 Who was Will­iam Wilber­force (1759–1833)? He studied at Cambridge University creating a lasting friendship with future prime minist­er, William Pitt the Younger. In 1780, Wilberforce became M.P for Hull, later representing Yorkshire. In the 1780s Wil­b­erforce and his allies argued for an end to slave-trading on the basis that it was an immoral blotch on the reputat­ion of a proud, Christian nation.

Slave holders, on the other hand, patriot­ically maintained that their trade was utterly vital to Britain’s imperial econ­omy. And the connection between the Navy and the colonies was very strong. Import duties collected on British colonial produce helped fund the Treasury whose primary objective was defence of the realm. The country was divided.

So how do modern histor­ians know Lord Nelson’s true beliefs? Let­t­ers he wrote onboard HMS Vict­ory reveal­ed his posit­ion, showing his vehement opposition to Wilber­force ’s camp­aign for the abolition of the slave trade and his sympathy with the slave-owning elite. To help his friend Simon Tay­lor, Nelson wrote he would launch his voice against the “damn­able and cursed doctrine of Wilber­force and his hypocritical allies”. Afua Hirsch says Nelson used his position to "perpetuate the tyran­ny, ser­ial rape and ex­ploitation org­anised by West Indian planters, some of whom he counted among his closest friends".

Wilberforce, the Anglican Bishop of London and their religious allies had to work for decades to end Britain’s offic­ial in­volve­ment in the transatlantic slave trade. His nation­wide camp­aign helped bring an end first to the trade between Africa via Brit­ain and the Caribbean in 1807, and then to slavery itself in the 1830s.


Nelson was widely celebrated for victory in the 1798 Battle of the Nile, off Egypt's Mediterranean coast. And he became even more famous as the heroic victor of the 1805 Battle of Trafalgar. He lost his life at the height of the fight­ing, against the rival combined fleets of Napoleonic France and Spain, aboard his flag­ship HMS Victory. The dead Admiral was soon elevated to the status of an al­most god-like imperial, patriotic hero. But though extremely capab­le in command of a fleet, he had been in other ways a flawed human being, limited by his own experiences and friend­ships. Thus Christer Pet­ley showed how Nelson, the British Navy and Trafalgar were all linked to the big­ger British political struggle over slavery.

Thanks to Lord Nelson, the British Navy soon enjoyed almost complete control of the seas. After the British formally abolished the slave trade in 1807, Nelson’s succ­essors took freeing of the slaves ser­iously. 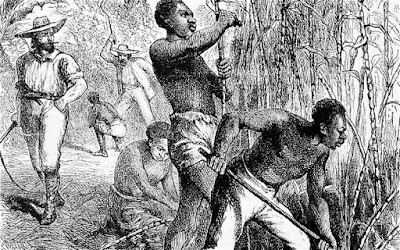 Monuments
The hundreds of USA statues that still stand, often in southern states, have always been the subject of trauma for many African Americans. The mem­or­ials are rightly seen as glorifying slavery and segregation, and perhaps energising white supremacist groups. While the USA argues about whether to tear down monuments to the support­ers of slavery, Britain has trouble in confronting its ugly past.

The USA is moving on from its slavery and segregationist past. But have the British at least put the nation’s monuments in their historical context? Yes, Nelson’s column does include the figure of a black sailor, cast in bronze in the bas-relief. He was probably one of the thous­ands of slaves promised freedom if they fought for the British mil­itary, only to be later left destitute and homeless, in London. The black slaves whose brutalis­ation helped make Britain a global power ..largely remain invisible.

Lord Nelson’s supp­ort­ers have moved to defend him. They argue that he was the man who twice defeated Napoleon at sea, and, in so doing, confirmed Britain’s unparalleled naval supremacy. Now Afua Hirsch says that Britain should look more carefully at its past, to understand itself better today. The Trafalgar Square statue should be protected since Nelson was truly one of the nation’s greatest maritime heroes. But a full picture is required; historically accurate plaques need to be added. 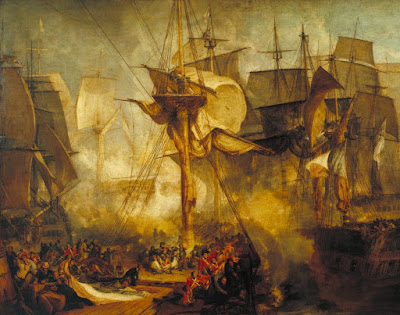 
Conclusion
In the British sugar colonies in the Carib­b­ean in the late C18th, it was the transatlantic slave trade that drove the thriving plantat­ion econ­om­ies and made huge profits that flowed back into the wider British economy. Could British colonial­ism continue to thrive without the trans-Atlantic slave trade?

In the battle over slavery, Nelson clearly symp­ath­ised with the sugar traders’, naval leaders’ and slavers’ pol­itical outlook. As he became more exper­ienced, he increasingly despised Wilber­force and staunchly opposed the British abolitionist campaign. Brit­ain’s best known naval hero, he might have used his seat in the House of Lords and his hugely influential position to perp­etuate slavery in the British Caribbean. If he had lived long enough! 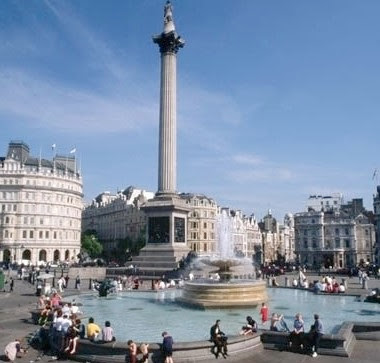 For new research, about the Royal Navy and the C18th British Atlantic Empire, read Christer Petley’s book The Royal Navy, the British Atlantic Empire and the Abolition of the Slave Trade, 2016. And for Napoleon's role in making slavery legal again in the French colonies, read the BBC article. The Emperor's efforts to restore slavery meant that campaigning for the 1806 Act in Britain would help to undermine Napoleon's plans for the Caribbean.

I agree that Nelson was flawed, as is every human being. But the "18th and 19th Century" blog suggests his flaws were widespread than you suggest.

I have nothing but admiration for the tenacity of Wilberforce. Without him, slavery would have continued for many more decades. Not far from where I live are the remains of the Wilberforce oak. It was here that Wilberforce informed William Pitt of his intention to bring forward the abolition of slavery.

Hello Hels, In the past the push in the direction of hagiography meant making absolute heroes of all people accepted as famous, even when that meant inventing the story of Washington and the cherry tree, or erasing people's links with slavery. Sometimes today, rather than restore the balance, these historic figures are viciously attacked, leaving their good deeds in shreds, and making absolute villains of them.

We need a more balanced view, which somehow is rarely met with. We also have to set up our personal measuring sticks when looking at characters such as Nelson, Dickens, Wagner, etc. For me, some pass and some don't.

Overall, these debates make me proud that I am from Northern Ohio, where even the earliest pioneers found time to form abolitionist societies, and to help escaped slaves via the underground railroad. Look at this map of the railroad, and notice how Ohio has the highest concentration of escape routes!

Even maple syrup was imbued with the virtue of having been made without slave labor, although using maple sugar does not seem like such a hardship!
--Jim

I loved reading the post on Frances Nelson, an intelligent and educated young lady who suffered terribly in her life, before marrying Nelson and after. I am sorry Horatio and Fanny couldn't have a baby together, but he treated her and her child like dirt, once he found the love of his life - the married Emma Hamilton. It seems that Fanny might have starved to death, if she wasn't supported by her much loved father in law.

The other flaw, that I did not know about, was blatantly disobeying military orders at the Battle of Cape St. Vincent. And again at later expeditions. He was lucky he wasn't put in front of a court martial. Brave man or reckless?

me too. Especially brave since, although the Church was with him, the Navy and the colonial authorities were not. I know that the Lord Chancellor requested that Wilberforce be buried in Westminster Abbey, to honour his important role in the abolition of slavery. But I suspect not too many other memorials to Wilberforce were built across the country. There are heaps of Nelson memorials, however.

to achieve a balanced and accurate story of heroes, historians require a] reliable information on both sides of the hero's personality/behaviour and b] a willingness to publish the less admirable bits. With Nelson, all the letters that he wrote onboard HMS Vict­ory have only recently come to light. Were they known about and hidden before, by Nelson's supporters? Or was this truly an amazing discovery that suddenly changes the way historians write? In either case, you are correct - balance is tricky.

Northern Ohio must have been a special place. Thanks for the reference.

I can understand how Britain banned slavery via Britain in 1806-7, but how could Britain ban slavery in or via other nations?

In 1833 Parliament passed the Act to abolish slavery in the British West Indies, Canada and the Cape of Good Hope in South Africa. Between 1808 and 1869 the Royal Navy's West Africa Squadron seized 1,600+ slave ships and freed c150,000 Africans. There were some advantages in having the strongest Navy in the world!

Despite this, as you note, the Brits could not stop a further 1 million people being enslaved and transported that century.

Hi Hels - thanks for the informative post ... I'm not the world's best historian and so I live and learn. I also know that there's always so many facets to history - I know there's been quite a lot about him in recent years to coincide with the 200th anniversary of Parliamentary legislation. He's revered in Hull, his home city. I note the Ohio connection. His statue in Westminster Abbey is To change our views, as we now see, is so difficult - yet we continue researching to find out more.

the learning never stops, even for historians who work in their area of study 40 hours a week. But that reminds me of two issues. How do we know which historical sources to trust and which to question very carefully? And what happens when the new evidence challenges much loved national belief systems?

Readers will have no trouble believing that Lord Nelson was very close to some of the colonialist planters in the Caribbean. But will it challenge Lord Nelson's position as a national hero when they read that he increasingly despised Wilber­force and did everything he could to damage British abolitionism?

The role of slavery in the formation of the british empire and in providing the money which powered the industrial revolution is very interesting . The money which as paid to those impacted by the abolition of slavery as compensation fro their "lost assets was largely responsible fro providing the capital which built the factories of the industrial revolution and it could be argued put us on the road to climate change !!
My family were involved in this awful trade between Ireland and the Caribbean . They sold linen and flax to the planters in the US to clothe heir slaves and then also seem to have traded in humanity themselves although not in a huge way thank god. Wilberforce was a man of vision and humanity who really worked so hard to change peoples perceptions of what is right . A true hero whereas Nelson seems to me to have been a man of great ambition and ability who lacked empathy fro hiss fellow human beings .

not only did compensation money lead to the industrial revolution and climate change. It also led to even more exploitation of the working class than had been in Europe before, poverty, grim housing and diseases.

Wilberforce was indeed a man of great humanity. Had he been born one generation later, I am sure he would have turned his attention to the dire poverty and misery in British industrial cities.