I have always liked the idea of an artist’s work being shown in the family home that the artist once lived in. Consider, for example, Rembrandt’s home in Amsterdam, Durer’s home in Nuremberg or Ruben’s home in Antwerp. The idea of a house-museum seems more authentic than a multi-artist, multi-era gallery built decades after the artist’s death.


Anna Ticho (1894-1980) was born in Moravia, now Czech Rep­ublic. Anna moved with her parents to Vienna at 15, and studied draw­ing at an art school directed by a Czech artist. She was in the right place at the right time! Pre-WW1 Vienna was still the glittering capital of the Austro-Hungarian Empire and was the beating heart of the art world. Ticho loved contemporary art­ists such as Gustav Klimt, Egon Schiele and Oskar Kokoschka, from the avant-garde Sec­es­s­ionist group. And she could visit galleries like the Albertina as often as she wanted, to see paintings by German Renaissance artist Albrecht Durer and Flemish Renaissance artist Pieter Bruegel. She was exposed to both the traditional, classical art of Europe and to C20th excitement.

Three years later, in 1912, she was travelling to Palestine to be with first cousin opthal­mologist Dr Albert Ticho. Anna married Albert just be­fore war broke out, and moved to Damas­cus with her husband where he served as an Austrian Army doctor and she as his assistant. Dr Ticho was discharged after war ended.

The Tichos managed to find their way back to Palestine a year or so after the end of the war and in 1924 they acquired the building that now houses Anna Ticho’s works. This large house, originally built in 1864 by a prominent Ottoman family, was and is surrounded by gard­ens. The Jerusalem house had to be comfortable and elegant because they hosted local and British government officials, artists, writers, academics and intellectuals. The Tichos were always active in Jerusal­em’s social and cultural life, including involvement in the Bezalel Art School. 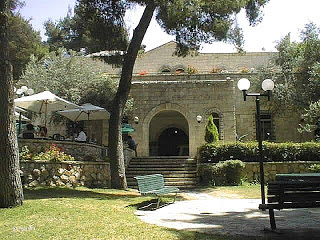 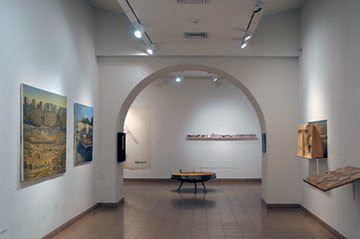 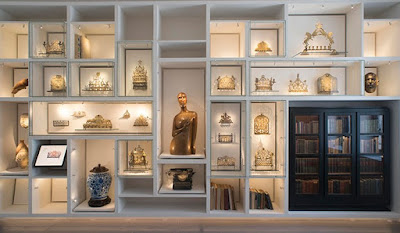 Besides assisting her husband in his medical duties, Ticho found time to travel around the country, to capture some of the country’s scenery. This was interest­ing since the Israeli land­scape could not be more physic­ally and cult­ur­ally different from Brno’s and Vienna’s. So it took her a while to adapt to the very diff­erent natural light & colours of the Levant.

I am assuming she connected to her new home in a biblically hist­orical context and not via religious commands. The Israel Museum noted that Ticho depicted Jerusalem as “a dead and desolate city, a far cry from the ‘navel of the world’, holy to three religions.”

They lived far away from the world’s major art centres, but Ticho did take other cultural influences on board. And they mixed with every travelling artist arriving in British Pal­estine. Her works were first shown at the historic exhibition of local artists at David’s Tower in the Old City of Jerusalem in the early 1920s.

Pride of place was given in her new home to drawings she had brought from Vienna’s young and talented artists: Klimt, Schiele and Kokoschka. They converted the lower storey into an eye clinic. Anna was busy running her husband’s medical practice and running the home, so there didn’t seem to be as much time for art as she would have liked.

Eventually her drawings of figures and Jerusalem landscape were done from nature, using the familiar hills, rocks and olive trees as source material. Perhaps the barren Jerusalem landscape encouraged Ticho to turn to sketching and water colours, not oils. The stony Judean Hills, treeless and human-free, lent themselves to her austere sketches.

Despite living in the Levant, Anna made several successful trips back to Europe and also exhibited in the USA. Her atten­t­ion to detail was central in Ticho’s best known works. Old City of Jerusalem, a graphite drawing from 1934, was also very precise and detailed creation.

Only later did Ticho focus on solitude and eternity, depicting olive trees, houses and aging people. She drew the maze of rooftops of the houses of the Old City stretching to the horizon above their opaque win­dows, creating a delicate interplay between stones and windows interwoven with domed roofs. She moved to earthy tones. 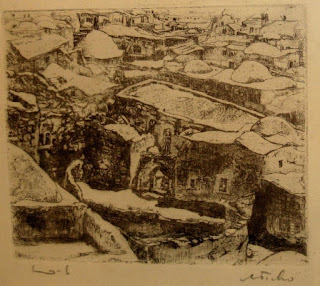 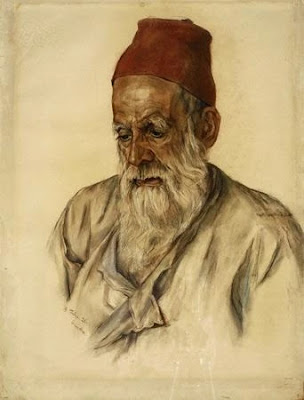 In the 1940s and 1950s, the influence on Ticho of the avant-garde time in Vienna emerged. Schiele in particular influenced the way she worked on her line drawings. In this era she fav­oured a naturalistic approach, employing shading and flowing lines, and leaving areas of the page untouched, but as an integral part of the composition.

Her beloved husband’s death was in 1960. Afterwards, Anna continued to live and work in the same house until her own death in 1980. Toward the end of her own life, Anna bequeathed the house, the library, her art collection and her husband's extensive Judaica collection to the City of Jerusalem for use as a public art gallery.

And it’s not just Ticho’s own work on display. Today part of the Israel Museum, it also houses temporary exhibitions by other artists. "A Room of Her Own", for example, was an ex­hibition of women in portraiture from the C19th on. And the Israel Museum wanted ex­hib­­itions that covered a range of media, including painting, photo­gr­aphy and video to explore issues of living spaces and women in art.

The exhibition “Lifescape: The Work of Anna Ticho” currently fills most of the gallery’s ground floor and will be on dis­play until mid March 2019. Curated by Timna Seligman, the exhibition chronicles Ticho’s experiences and cultural bagg­age, in Brno, in Vienna and in Jerusalem. It is her story, but it reflects on the much wider story of the Jewish people, immigration, and the creation of the state of Israel within her lifetime.

Read the book “Lifescape: The Work of Anna Ticho” by Timna Seligman.

Hi Hels - thanks for letting us know about both of them ... I'd never heard of her ... but fascinating to read about their lives. She was obviously very talented ... cheers Hilary

No wonder she could speak 5 languages, run a busy practice, create art and be cultural centre in Israel. She was Czech.

Hello Hels, I just looked up some of Ticho's other works, and I like her drawing style. I also like museums set in houses, but from the glimpses I've seen, Ticho's house (as used as a gallery) is too cold and "professional"; I don't get any domestic feeling at all, but perhaps other parts are more evocative of when the Tichos were actually living there.
--Jim

The portrait of the bearded man looks rather good to my eye.

I believe the reason Anna was not well known was because she did not move permanently to Paris or Vienna. Most of the Eastern European artists who became stars, like Kandinsky or Chagall, became world famous after they from Vitebsk (or wherever).

naturally :) However I believe her art skills were as a result of excellent teaching and inspiration from Vienna.

the house was built in the mid 19th century for very hot, dry summers, so the plain white expanses of walls probably suited the Ottomans very well. I imagine it was filled with furniture and rugs when it was used as a family home, but now it does look a bit sparse.
In any case, who would want bus loads of school children sitting on quality furniture?

I added another photo of a collection to show that the walls could be more normal.

her drawings were beautiful, yes.

Having a beautiful garden in an Israeli city is rare. Most people live in blocks of flats.

Israel, which is 50% uninhabitable desert, is 20,700 sq ks in area with a population of 7.8 million people. I call that crowded! No wonder Israel has few houses and even fewer gardens.

What a fascinating career she had! I must admit I missed this place when I was living in Israel, but then, I lived in Givatayim, outside Tel Aviv, where I worked, and yes, it is far more usual to live in a flat there than a house. I did. Fortunately I was around the corner from a park, which had an observatory in it, with the occasional viewing night for astronomy fans. I remember when I was returning to Australia I noticed the difference between Tel Aviv from the air and Melbourne - flats in Tel Aviv and houses in Melbourne.

Maybe next time I visit relatives there I will check out tuis house-museum.

I lived in Jerusalem for a year by myself, then I lived near Tel Aviv for a year and a half with my beloved. Tel Aviv and points north are my totally my favourite parts. But I must admit that the Israel Museum, both the main campus and the Ticho House Museum, are well worth visiting.

If families don't live in free standing houses with fronts and back gardens, people have to have alternative open spaces. You were fortunate enough to be near a park. In Tel Aviv, my son lives within walking distance of the great beach. The Ticho garden in Jerusalem is a delight; the restaurant tables are spread around under the trees.

I hadn't heard of the artist, but the picture of a bearded man is enough to make me want to know more about her. I instantly connected with it, as if I'd just glanced at him myself, in real life! Thanks for this informative post.

Agreed. I have no doubt that it takes great skill to paint a bowl of fruit on a table, or a coastal scene with a ship at sea. But additionally, it takes great sensitivity to create a moving portrait.

Although Anna Ticho was never part of the teaching staff of the Bezalel School of Art and Crafts that was founded in 1906, she was very close to many of the artists there. Even though she was separated from them stylistically, she became good friends with Leopold Krakauer, Jacob Steinhardt and Joseph Budko, the head of Bezalel.

In exhibitions in the US, she showed her landscapes next to other Israeli artists such as Yehezkel Streichman, Moshe Gershuni, Nahum Gutman and Joseph Zaritsky.

great journal article, thank you. When I first learned art history, the three fine arts were painting, architecture and architecture. Anna Ticho's drawings were so talented, I had to change my thinking.