Australian soldiers in WW1 with their dogs etc

Animals made an important contribution to Australia’s mil­itary history during WW1. Homing pigeons were used as a comm­unication tool: they were silent, difficult to intercept and not greatly affected by gas or noise. They could carry messages over long distances, from the Front Line back to Britain [and in turn, the Germans trained hawks to kill any carrier pigeons they saw].

Early in WWI, cavalry horses were considered essential offensive elements of a military force. But over the course of the war, horses’ vulnerab­il­ity to modern machine gun and artillery fire reduced their ability on the battlefield. Thereafter they were mainly used for logistical support as better suited than mechanised vehicles to travelling though deep mud and over rough terrain. Light draught horses were used to pull light artil­l­ery, wagons and ambulances and to carry supplies and munit­ions. Heavy draught horses of a sturdier type were teamed together to pull the larger artillery pieces. Don­k­eys, camels and mules were used to transport sold­iers, weapons, ammunition and food. 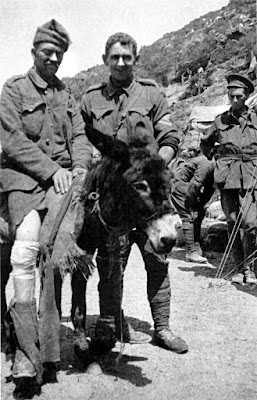 Simpson walking alongside his donkey,
bearing a wounded soldier, 1915.

Austral­ian soldiers also adopted a variety of familiar animals as mas­cots and pets. Far from home, the men shipped in wallabies, kang­ar­oos, rabbits, possums, cockatoos and kookaburras, all dependable comrades.

But from my perspective, dogs were always the most important an­im­al- both personally and medically! British families gave their pet dogs to the army so they could carry messages in special tubes on their collars. And dogs could track the enemy and locate injured soldiers. They were fast, diff­icult to shoot at, and they also caught rats!

The Germans also made extensive use of messenger dogs, who were considered almost as valuable as men and equally vulnerable to poison gases. Respirators for dogs were therefore created from ersatz fabric which could be soaked in a protective solution. Most dogs would have been reluctant to have the mask put over their muz­z­les, so the rabbit fur lining may have served as an encouragement.

As the network of trenches spread throughout the Western Front during WWI, so did the number of dogs. Many different breeds of dog were utilised but the most popular were medium-sized breeds such as Doberman Pinschers and German Shepherds because of their superior strength, agility, terr­itorial nature and trainability. Other breeds associated with WWI were Terriers, often employed as ratters, trained to hunt and kill rats in the trenches.

Military dogs fulfilled a variety of roles, depending on their size, intelligence and training. Working dogs were first used by the Royal Australian Engineers in 1918, as messengers in the trenches of France for Aus­tralian sappers. Their soldier-controllers were called Military Working Dog Handlers.

Sentry dogs were trained to bark loudly when they perceived an unknown or suspect presence in a secure area eg a camp or military base. Scout dogs, on the other hand, were highly trained and possessed a quiet and discip­lined nature. They were used on foot patrol, and utilised their keen sense of smell to detect the enemy, often up to a kilometre away. Unlike sentry dogs, scout dogs were trained to be silent; to stiffen their bodies, raise their hackles and point their tail if the enemy was in the vicinity.

Casualty dogs were trained to locate the wounded on battle fields. Equipped with medical supplies for those soldiers able to tend their own injuries, mercy dogs would remain with severely wounded soldiers, accompanying them as they died. Messenger dogs proved to be highly dependable in the dangerous job of conveying mes­sages. Running more quickly than a person, particularly over rough terrain, dogs were less visible a target for enemy snipers.

Animals generally endured worse conditions than the soldiers, often exposed to weather with inadequate shelter. 1916 was Europe's worst winter for more than 30 years, yet horses were not even issued with rugs. Like their carers, animals were subjected to artillery fire and gas attacks. Special nose plugs for horses were developed to enable them to breathe dur­ing a gas attack; gas masks were later developed for both dogs and horses.

The dogs’ vital roles included sniffing out enemies, carrying supplies, finding the wounded, delivering messages and first aid supplies. So of course anim­als served & died, with the nation’s soldiers. Some 9+ million animals (c8 million horses and 1 million dogs) perished or were wounded in the Great War, said Nigel Allsopp in his book, Animals At War. 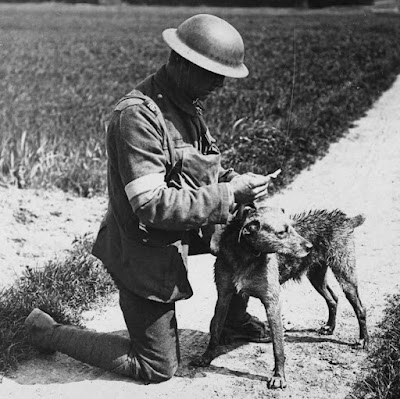 Modern memorials
In Nov 2004 the Animals in War Memorial was unveiled in London’s Hyde Park. The inscription says: “This monument is ded­ic­ated to all the animals that served and died along side British and allied forces in wars and campaigns throughout time. They had no choice.”

The Australian Soldier Park, established in 2008 in Beersheba is dedicated to the memory of the Australian Light Horsemen in Israel as part of General Allenby's conquest of Palestine. The memorial statue of  the light horseman and his brave horse is surrounded by documents on aluminum boards

As a project for the centenary of ANZAC in Pozieres France, a Memorial Park was built. Pozieres was part of the land that Charles Bean desc­rib­ed as “a site more densely sown with Australian sacrifice than any other place on earth’”. The Park provided a suitable memorial to those soldiers, and inc­l­uded a small sandstone with a war animal bronze plaque and a poem.


In 2014, Ewen Coates made a commemorative sculpture showing an Explosive Detection Dog/EDD and his handler in the Australian Defence Forces. The resulting sculpture at Canberra’s Aust­ral­ian War Memorial commemorates the service and experience of all EDDs and their handlers involved in  Australia’s military conflict. 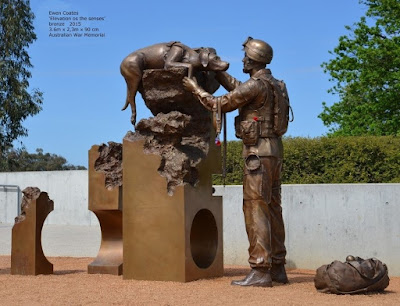 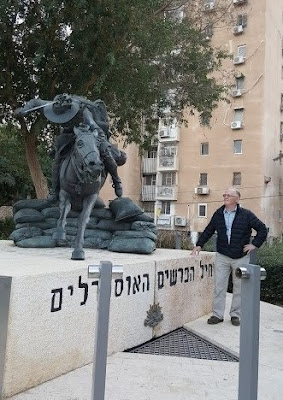 Hello Hels, Your post is a fitting tribute to the animals that served during war. I am surprised that there is no major book or movie devoted to them--perhaps there is, and certainly there will be. I was offended by the Hyde Park inscription "They had no choice." Something like "They gave their all" or "These animals served their country, too" would have been much more inspiring and fitting, and would emphasize that the animals contributed their special talents and qualities. Choice was hardly the point, and takes away our admiration for the action of the animals who served. The soldiers "had no choice" either, but we honor them for serving anyway, especially when they gave their lives or health to prevent major disruptions in the world order.
--Jim

Simpson was a very special stretcher bearer, I think - he was young, brave and tireless. He carried injured men on a series of donkeys, from the Front, back to medical care behind the lines.

He and his donkey were machine gunned to death in May 1916 :( The Red Cross clearly didn't protect him.

I am recommending "The Animals' War" by Juliet Gardiner, largely because the last book of hers that I read was so wonderful: "The Thirties: an Intimate History".

I have not yet read "Soldiers in Fur and Feathers The Animals that Served in World War I" by Susan Bulanda. But I noticed an important additional issue that her publishers mentioned: "These animals provided life-saving support as well as an emotional bond that was truly unique". And the author "has factored the human/animal bond, with which all pet lovers will identify, into her accounts".

John Simpson was machine gunned to death at 22, yet he was a stretcher bearer and had never fired a single shot himself. He was killed while the donkey he was leading carried a Red Cross on his arm signalling both man and animal were medical non-combatants.

Even so, I am certain that "Simpson and his donkey" only became the epitome of the Anzac spirit because they were together. Which Australian school pupil would have learned about Simpson alone?

I couldn't read the book. I feel a little teary after reading your post. It is great that animals used in war are commemorated, as they deserve to be. I remember seeing that statue at the Australian War Memorial in Canberra.

When I first saw the Explosive Detection Dog sculpture in Canberra, I was totally in tears about the love between that man and that dog. Of course dogs and horses are only animals, and not humans. But I know how passionate most Australians are about their pets. My black labrador was almost the most loved member of this family.

no advertising please. But if you have a comment about WW1 animals or soldiers, I would love to hear it.

I had no idea that dogs were used so extensively and for so many different skills during the conflict.

The memorials are moving.

I think dogs are very intelligent and loyal creatures, so their huge contribution to WW1 did not surprise me at all. But oh dear, they must have suffered dreadfully.