Looted art in Germany and France - Hildebrand and Cornelius Gurlitt

Early in his car­eer in the 1920s, Hilde­brand worked as a museum dir­ector in Zwickau, where he tried to convince people of the merits of modern art. But he faced a right wing backlash and was dropped. In 1933 he moved to Hamburg where young Hildebrand tried to rebuilt his career as a modern art dealer, just as the Nazis rose to power.

Hildebrand started to actively link himself with the Nazi goals, writing to the Propa­ganda Ministry to volunteer his skills as a leading expert in modern i.e degenerate art. He was sent with other dealers to act for the Nazis, with the task of acquiring works for the Führermuseum project. Hit­ler’s Special Art Comm­ission of Linz planned to create a super museum in his boyhood town, Linz, that would contain every important art work in the world. So Hildebrand had a blank cheque. He obtained works by Delacroix, Fragonard, Seurat and Courbet, Paul Signac, water­colours by August Macke; horses by Franz Marc; Millet, Boucher and works by Kollwitz, Munch and Liebermann. Many paintings had been stolen from noted French Jewish art dealer Paul Rosenberg. 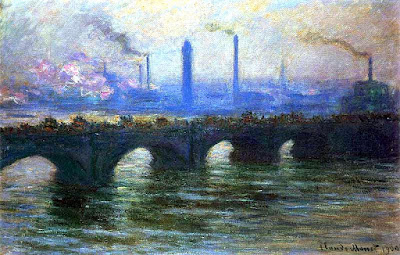 Monet's The Bridge of Waterloo was found wrapped in newspapers behind a library in Cornelius Gurlitt's house in Salzburg. It was of a London day of fog and grey skies. The canvas back had a 1938 note from Hildebrand's mother saying: "I am happy to confirm that this picture photographed on the back was bought by me and my father many years ago and I gave it to you on your wedding in 1923". Hildebrand Gurlitt clearly lied about the origins of his collection, making  this painting one of the many works on display with dodgy provenance. 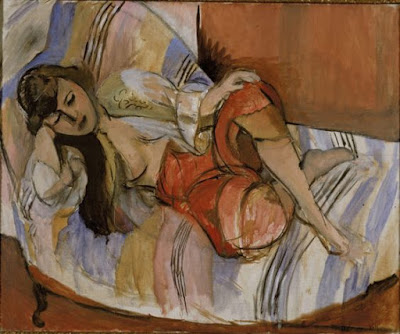 Remember the Allied armies' Monuments, Fine Arts and Archives Programme aka Monuments Men? They were an international volunteer group who operated within the Allied Forces to protect Eur­ope’s cultural prop­erty. In June 1945 they captured Hildebrand and 20 boxes of art in Aschbach, and questioned his connection to the Nazis. But his reply was uncheckable: he said that most of his coll­ection and papers had been destroyed in Dresden’s bombing, Feb 1945.

In 1945 Hildebrand described his dealings with Allied author­ities, and listed the art in his possession. As part of its investigative process, German authorities’ search found that in May 1940 the Reich Propaganda Ministry sold 200 paintings to Gurlitt for a small price. Hildebrand gained 115 more works of Degenerate Art in the same way in 1941, giving him a per­sonal trading collection of 1,500 art obj­ects. Gurlitt used his position to sell art to domestic collectors, mostly to Bernhard Spreng­el, whose collection forms the core of  Hanover's Sprengel Museum.

After the war, Hildebrand Gurlitt was quickly rehab­il­it­ated and in 1948 he was again direct­or of Dusseldorf Kunst­verein gallery. He continued trading artworks until dying in a car crash in 1956. And was memorialised in his son’s obituary.

In Sept 2010 Hildebrand’s son, art collector Cornelius Gurlitt II (1932-2014), was caught on a Munich train by German cus­toms of­f­icers with a large stash of cash after ret­urning from Switzerland to sell art works. Cornelius was allowed to go on his way, still under suspicion. But he never married or work­ed, and never had a source of income other than sales of daddy’s art.

The art historian who first examined the collection claimed in Focus Magazine in 2010 that c300 pieces had appeared in the 1937 Nazi Deg­en­erate Art Exhib­it­ion in Munich. And she was trying to trace the original owners of the works and their surviving relatives. Other art historians asked that all the paintings be published, to be returned to their rightful owners.

In Sept 2011, the prosecutor obtained a search warrant to enter his rented apartment in Munich. They found 1,490 framed and unframed paintings hidden behind food, estimated at €1 billion! Some of the paintings were immediately suspected of having been looted by the Nazis during WW2. The Old Masters, Impressionist, Cubist and Expressionist artworks were done by the best artists News of this delayed discovery by Focus Magazine in Nov 2013 provoked a worldwide sensation.

In April 2014, an agreement was finally reached whereby the collection confiscated in Munich was to be returned to Gurlitt in exchange for his co-operation with a government-led task force. However Cornelius Gurlitt died in May 2014. In his will he bequeathed all his possessions to the Swiss Mus­eum of Fine Arts Bern as his sole heir.

More art objects appeared, even after Gurlitt's death. In July 2014, a new discovery was made in his Munich apartment: sculptures, perhaps by Rodin and Degas. A Monet landscape was found in a Gurlitt suitcase. Max Liebermann's work Riders on the Beach was auctioned at Sotheby's in 2015 in London. A Cezanne painting was found in his Salzburg home behind a cupboard.

Into 2018 the Kunstmuseum in Bern and the Bundeskunst­halle in Bonn pres­ented the Gurlitt works in two par­allel shows. They told the story of the confiscation of modern art, outlawed by the Nazis as Degenerate Art in 1937-8: 23,000 paintings, prints and sculptures from public galleries across Germany. Many of the works were sold abroad, making money for the Nazi regime. 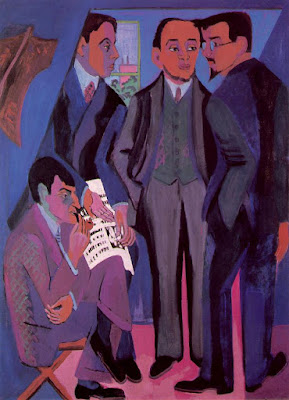 Portrait of a woman by Henri Matisse was traceable to Paul Rosenberg, a Jewish art dealer from Paris who had represented Matisse and Picasso and who had been forced to leave his collection behind when he fled France. Rosenberg's grand daughter had been fighting for decades for the return of the art dealer's paintings. She immediately sent lawyers on behalf of the Rosenberg heirs who entered into negotiations with Cornelius Gurlitt, his lawyers and the German state. Portrait of a woman WAS returned to Paul Rosenberg's heirs in May 2015.

Gurlitt's cousins filed a claim of inheritance on the artwork. Their lawyer supported the cousins with a psychiatrist who stated that Gurlitt suffered from schizoid personality disorder when he wrote his will. But the Munich court ruled against this relatives’ claims.

Unlike in Austria, there is no law in effect in Germany  requiring the return of Nazi-looted art, as long as the items in question can be proven to have been, at any point in time, legally acquired.  So in Nov 2014, the Museum of Fine Arts in Bern agreed to accept the Gurlitt estate.

Hi Hels - it is an extraordinary story ... just amazing. I didn't enjoy the film much ... but am grateful to have read up about it and now via your post here - thanks ... cheers Hilary

Hello Hels, As this article shows, looted art is an intensely complicated subject. It is also interesting to note how quickly normally high-principled entities are willing to accept blood money.
--Jim

I wonder if people loved the artwork in the Bern and Bonn exhibitions but were creeped out by their histories.

Not only an extraordinary story but a story that never seems to be resolved. The degenerate art was first removed from galleries and private owners from 1937 on, yet in 2018 the court cases are still struggling on. Now the grandchildren of the original owners are becoming elderly, so who will pursue the cases into the future?

I feel sorry for the galleries and private collectors who bought or inherited the works in good faith i.e they had no reason to doubt the legal rights of the Gurlitts (or anyone else for that matter) to the art.

Hildebrand Gurlitt, on the other hand, knew EXACTLY where the works came from and who were the rightful owners! Even Cornelius, who had nothing to do with his dad's dealings before the war, was totally morally contradictory when he bequeathed the family treasures in the 1950s. See Apollo Art Magazine, 31st Jan 2018.

As far as I can see, most gallery visitors simply found the art works breath taking. Fortunately the curators analysed the legal and moral issues in wall texts next to each work.

Such a messy business. You will recall seeing the quite good movie about the US woman who returned to Vienna to get back an important painting. It is bit strange that Austria has different laws to Germany regarding the return of stolen art.

messy and almost irresolvable. The original 1920s and 30s records from the auction houses and the insurance companies were largely lost during WW2, or intentionally destroyed by organisations like the Special Art Comm­ission of Linz. Today's courts aren't going to listen to grandchildren with vague memories of what their grandfathers once owned.

Austria is a sovereign nation with its own laws, but the art thefts mainly occurred after the Anschluss that united Austria and Germany. I hope the European Journal of International Law reference is helpful.

This is probably a situation that will never be really resolved. As time goes by it becomes even less likely. The treasures that the British have plundered from around the world crowd the British Museum, such as The Elgin Marbles.
I did not think that The Monument Men was a very good film, sadly.
CLICK HERE for Bazza’s criticasterous Blog ‘To Discover Ice’

true, about colonising nations who took the treasures they found in Africa, South America, China and India etc... and put them in private hands or public galleries in Europe. Napoleon was probably the star plunderer.

Re the Monument Men film, never see a Hollywood film version of a book you loved. If you haven't read the book, it was released in 2003 by Robert Edsel - The Monuments Men: Allied Heroes, Nazi Thieves and the Greatest Treasure Hunt in History.

Talking of the Monuments Men, note the role of British scholar-soldiers in protecting cultural heritage. It was the British who first recognised the need for a division of officers trained in, and dedicated to, the protection of cultural items in conflict zones. In January 1943, during a pause in the fighting near Tripoli in North Africa, Mortimer Wheeler, director of the London Museum, grew concerned about the fate of three ruined ancient cities nearby along the coast of Libya. He and famous British art historian John Ward-Perkins created a team, under a division of the War Office in London, the Archaeological Adviser’s Branch.

I had never heard of the Archaeological Adviser’s Branch, so thank you. I can see more reading in my near future.

This is an interesting post for sure . The theft of art was widespread and really I think that the descendants of victims should receive some some compensation even if they cant prove provenience to the satisfaction of a court . Maybe a viewers tax that these galleries have to levy on all of us who want to see this art . Some of the so called legal transactions happened under extreme duress and dont morally constitute a transaction made in good faith. It is dreadful when you see elderly people living in poverty and traumatized by what they saw as children and know that their families had things stolen from them or "bought f"from them that would vastly improve their lives.

Grandchildren of the WW2 victims have enough trouble getting their art back, or compensation, when they have _100% written proof_ of the art object's provenance. I cannot imagine that the courts would be legally satisfied by anything less. But I recognise that provenance research is always going to be extremely difficult, particular if documentation was stolen or destroyed in war time conditions.

And I agree totally that even when the legitimate owners voluntarily sign the sales documents, that doesn't mean they weren't acting under extreme duress. For example, when the Bloch Bauers and Altmanns were arrested by the Nazis in Vienna, they HAD to transfer their businesses and arts into German hands to save their brother. So they did!