Guernica by Picasso: anti-war in general or pro-Republican specifically?

Pablo Picasso was born in 1881, in Málaga Spain. Landmarks of the artist’s childhood are still vibrant today in this sunlit Medit­er­r­anean city. The Church of Santiago was where Picasso was bapt­is­ed. Touristy Plaza de la Merced was where the art­ist etched his first drawings outside his home.

Picasso was messy, both boisterous and silent, amor­ous and domineering. His love of bullfighting stemmed from child­hood visits to Málaga’s Plaza de Toros de la Malagueta, making picadors and bulls a recurring motif in his work. 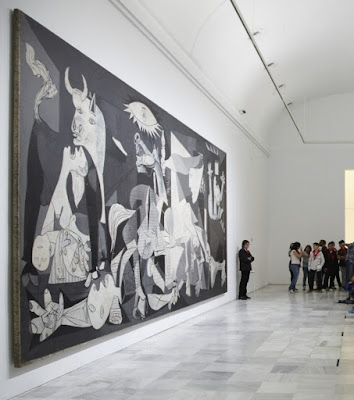 Early on Pablo shed his father’s name, Ruiz, and adopted his mother’s more memorable Picasso. Within a few years, Picasso was painting skilled portraits of family and friends. By 16, his work got him into the prestigious Royal Acad­emy of Fine Arts of San Fernando in Madrid. And studied the Spanish masters he admired at the Prado Museum.


Picasso was young when Paul Cézanne, Georges Seurat and the Post-impressionists freed themselves from Impressionist brush work, adding defined forms and emotional intensity to their can­vases. Under their influence, Picasso quickly reinvented his style.

The Spaniard finally settled in Paris in 1904, at 22, where he  progressed quickly. With his painting Les Demoiselles d’Avignon 1907, the artist overturned traditional composition, persp­ective and aesthetic appeal. The five distorted, naked women at a brothel alarmed even Picasso’s closest friends. But his radical art movement was launched.

Now a leap in time. Picasso had been given a commission by the Spanish Republican Government to produce a mural for the Spanish Pavilion of the 1937 Paris World’s Fair!! He had been searching for months for a subject, but per­s­onal and international turmoil had disrupt­ed his process. On the day after the attack in Guern­ica, Picas­so was sitting in the Café de Flore Paris where he read of the atrocity in the newspaper. He had found his theme at last. 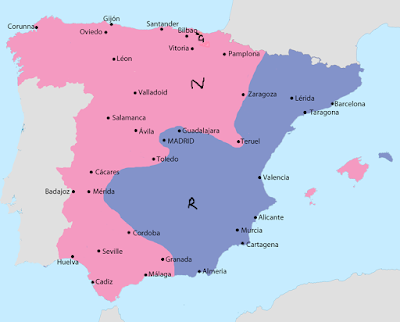 Nationalist Vs Republican Spain, 1937
Press on G for Guernica

In July 1936 the brutal Spanish general Francisco Franco had laun­ched a semi-successful coup against Spain’s democratic re­public; over half of Spain fell under Franco’s Nationalist control, while less than half was retained by the Republican Government. As glob­al tensions soared, Spain’s bitter civil war rapidly internat­ion­al­­ised: the Republicans were armed from the Communist Soviet Union, while Franco was armed by Fascist Germany and Italy.

In April 1937, a busy market day in Guernica, German and Italian war planes assembled overhead to bomb the small un­def­ended Basque town. The attack lasted for 3 hours as high explos­ives destroyed the town. Although the death toll was revised down to 200-300, it sent a terrifying mes­s­age to the world: The new weapon unleashed from the sky on civil­ians was a prelude to the devastat­ing WW2 carpet-bombing of Europ­ean cities. The raid was not carried out for military purp­os­es; rather it had the specific aim of terrorising civil­ians: military facilities were not targeted.

In May 1937, Picasso made his first sketches, using elements from a previous work. The bull and the horse were present in early drafts, along with the fallen soldier and the woman with a lamp. After 5 weeks, the vast, mural-size canvas was complete, filling the vast canvas with what would become the defining image of the horror of war. Unveiled at the World’s Fair, Guernica caused a sensation. Best of all, the painting was acquired by the Republican government, for a total of 200,000 francs.

The work remain­ed in the USA for dec­ades, in the Museum of Modern Art New York; there it huge­ly influenced post-war abstract American art­ists eg Jackson Pollock.

Artists and critics noted the painting’s powerful but ambiguous imagery. His use of a bull, a tradition­al Spanish sym­bol, could have represented either Spanish victims or Spanish brutality. The figure of the wailing mother mourning her dead child may have referred to Michelangelo’s Pietà in which the Virgin Mary grieved her dead son. The one hope­ful figure was the female form emerging from a window, shining a light on the devastation. But then why did he choose a monochrome palette?

Picasso always said that he would not allow the picture to travel to his homeland until Spain was a republic. General Franco died in 1975 and Spain made the transit­ion to democracy as a constitut­ion­al monarchy, not to a republic. After 20 years of travelling to museums around the world, Guernica could return home in 1981 and be shown at Madrid’s Prado Museum. Note that the passions of the Spanish Civil War had not yet faded. 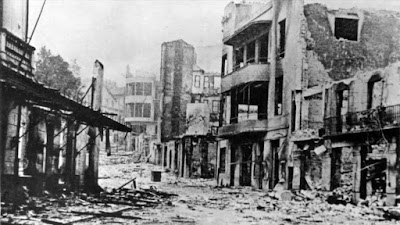 Guernica after 3 hours of terror from the skies, 1937

Picasso was masterful at branding his image. The traits that pro­moted Picasso’s creations led to praise and cult-like worship. But how pro-Republican was Picasso really? We know Picasso’s cousins were fighting on the Republican side, but I cannot find any details about Picasso’s own formal commitment. He was anti-war to be sure, but how party political was Picasso’s art?

[Alex Danchev was actually more moved by Picasso's graphic accounts of the camps, complete with anti-war illustrations. An article on the crematoria at Natzweiler-Struthof, near Strasbourg, crucified innocence and clenched-fist defiance grappled with mass killing and dismemberment. And The Charnel House 1945 was the offensive and defensive weapon deployed].

And why was Picasso tolerated during the Nazi Occupation of Par­is, despite being the most famous Degenerate artist there. He didn’t care. He avoided commissions, instead painting only what he wanted and expecting people to be interested. More tellingly, he joined the French Communist party only in 1944, which he did with great fanfare. But he was in his mid 60s by then!

Even post-war, Spanish art critic José Maria Galván was dispatched to the Côte d'Azur, in ord­er to have secret talks with Franco's rep­resentatives about hold­ing a Picasso retrospective in Madrid. Had Picasso accepted the proposals it would have been a major coup for the Nationalists, destroying Picasso's status as a hero of the left; he would have been regarded as a traitor for going back to Franco’s Spain. The retrospective eventually failed, but the newspapers quickly revealed Picasso’s political ambivalence.

Picasso cultivated his reput­at­ion, relying on the influence of pat­rons esp Gertrude and Leo Stein. But even to them Picasso’s own interpretation of Guenica was cagey. It was up to the pub­lic to see what they want to see, Picasso said. 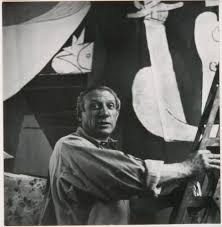 Picasso on a stepladder in front of Guernica in his Paris studio,
by Dora Maar in June 1937.
Gelatin silver print, 21 x 19 cm

In 1992 Guernica travelled, for last time, to Reina Sofía Museum Madrid. It remains the strongest anti-war artwork of the ages.

The focus has now moved to a Tate exhibition in London - Picasso 1932: Love, Fame, Tragedy until Sept 2018, written up very well in the Books and Boots blog. Or visit Musée Picasso Paris in the Mar­ais.

Picasso might have been a genius, but what we notice most is the self advertising. And women, of course.

Hi Hels - I wish I was in London now to see the exhibition ... some friends went at the weekend. I know families were split with their allegiances ... some came to England rather than fight ... thanks for this excellent review ... cheers Hilary

No wonder when Spanish Republican Government commissioned him to produce a mural for the Spanish Pavilion of the 1937 Paris World’s Fair, he was searching for a suitable theme.

all war is hideous but I think civil war is even worse. As you say, families are irrevocably split, neighbours can't be trusted any more, people go into exile and dictators arise out of the rubble.

Two of my mother's first cousins travelled to Spain from Australia to fight for the Republicans!

He might have been a genius but he was also one of the biggest A holes ( I channeling my sons here ) who lived in the last century . His misogyny was awful and in fact maybe he was aware of it to a degree as he certainly understood hypermasculinity . He was a negligent father and exacted a psychological violence on the women he allegedly loved ( if he was capable of it ) . At this point in time I find it hard to see his art in anything other than that context .

Picasso absolutely knew he was misogynistic, that he abused women and that he actively created an imbalance of power in his famous artist-muse relationships. He didn't care! That is what men who cultivate cult-like worship turn out like.

Hello Hels, We have had this type of discussion before in your blog--separating artistic works from the beliefs and personality of the artist himself (Dickens, Wagner, and so forth). I do find that after a certain point, artistic merit no longer outweighs personal deficiencies, but of course that line is drawn differently for each observer. Picasso was hugely popular, thus representing his era, although sometimes to the point of self-parody or kitsch.
--Jim

I must admit that with Picasso, I didn't even think of whether he behaved really badly or not. He did! But that still leaves us asking if Picasso had any specific moral, political or aesthetic values that he wanted to express in his art.

Yes, thoughts about artistic merit do depend on the individual viewer. But I have a specific problem re Picasso. I really loved his early works eg Man in a Beret, 1895; Portrait of Artist’s Mother, 1896; The Wait (Margot), 1900 and into the Blue Period.

He was a person of his time and perhaps, almost, can be forgiven for his liking of bullfighting. I can't see that he was involved with Franco government patronage at all, which is good. Btw, did you see anywhere that Mirka Mora's family was sent to a concentration camp by an antecedent of Senator Eric Abetz? That really does not surprise me.

Eric Abetz was the German-born great-nephew of a very important General during the 1940-44 era. General Abetz was definitely gaoled for a long time for his crimes against Paris Jewry. And Mirka Mora's family certainly hid in Paris back then!

As much as I dislike Eric Abetz's politics, I doubt that he ever met dear old uncle Otto. Howver it shows that this world is a VERY small place.

Now for a related question. For someone who painted so-called degenerate art in WW2 Paris, I wonder why Picasso didn't go into hiding.

So, was Guernica displayed at the 1937 World Fair in Paris? Any other of his works or his mates' works?

yes! Guernica was exhibited at the Spanish display in the 1937 World's Fair in Paris. But there was nothing in the mural to suggest where the destruction happened. Nor was there any overtly political imagery on show.

So the Pavilion's entrance presented an enormous photographic mural of Republican soldiers, a pro-Republican poem and and two pro-Republican art works. Just to make it clear.

Yes I once saw and Insight program on SBS about people who had war criminals as relatives .and Eric and his brother were there . They =were actually trying to argue that we should all be grateful to uncle Otto because he persuaded Adolph to spare Paris because it was such a beautiful city . An interesting way of looking at the situation dont you think?

exactly. President Trump defended the white nationalists who protested in Charlottesville in 2017, saying they included “some very fine people,” while expressing sympathy for their cause. He argued “You had many people in that group other than neo-Nazis and white nationalists. The press has treated them absolutely unfairly. What about the alt-left that came charging at, as you say, at the alt-right? Do they have any semblance of guilt?”

I find pro-neo Nazi views as repugnant today as all decent people felt about the Nazis before and during WW2. And after the war!