Albert Coates (1895-1977) was born in Ballarat in Central Victoria, oldest of seven children of strong Methodists Arthur and Clara Coates. Alth­ough money was short, Arthur and Clara raised their family valuing educ­at­ion. Albert had a thirst for literature and know­ledge, but his formal educ­ation ended at 11. At first he worked in a butcher's shop on Saturdays only, then he worked 6 days a week. At 14 was indentured to a Ballarat bookbinder, which gave the lad the chance to read widely and study at night.


Encouraged by night-school at Ballarat, Coates passed the junior public examination with distinct­ions in French and German in 1913. But Coates wanted a career in medicine. He qual­ified for Melbourne University but as he could not afford to take his place on financial grounds, he moved to Wang­aratta. There he worked in the Postal Department and studied in his spare time.

World War One and after
By 1914 Coates was able start a university medical course, however WW1 intervened. He was an idealistic 19 year old when he enlisted in the Australian Imperial Force in Aug 1914, as a medical orderly attached to the 7th Battalion. His time on board ship was spent assisting the doctor inoculating the men against typh­oid. Coates also studied German on board and in Egypt he con­tinued his study of his favourite languages, plus Arabic, at Berlitz School. 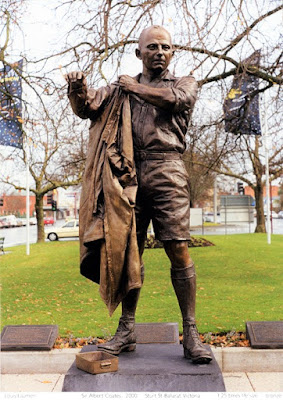 A stature of Albert Coates in tatty WW2 clothing, Ballarat
The plaques along the ground tell the Coates story

Coates was on board the fleet that headed for Gallipoli in April 1915, survived and was one of the last to leave the peninsula in Dec 1915. His battalion was transferred to France in March 1916 and fought in the Battle of the Somme. In Feb 1917 he was attached to the intelligence staff to use his languages as the battalion's interpreter.

He left France in Oct 1918 and returned with other Anzacs to Aust­ralia for a short stay, but the war ended a few weeks later in any case. Sir John Monash and British authorities recognised his ability and, at the end of the war, he was invited to apply for a commission in the British Army. But Coates was finally at home, so he worked in the office of the Commonwealth censor in Melbourne.

Late in 1919 he returned to the Post Office where he continued to work at night while studying medicine at the University of Mel­bourne in the day. In March 1921 he married Harriet Hicks (d1934) at the Methodist Church, Camberwell; they had a son and three daughters.

Interest in neurosurgery grew. Following his wife's death in 1934, Coates visited surgical centres in Britain, Europe and North America; shortly after his return he was asked to establish the neurosurgical unit at RMH. In Dec 1936 he married Cath­erine And­erson in Dunedin NZ. On his return he formed a neurosurgical unit, and later in 1940 a number of surgeons formed the Neurosurgical Society of Australia.

WW2
From 1936 to 1940 Dr Coates was a lecturer in surgical anatomy at Melbourne University. He enlisted again and in Jan 1941 he was called up, aged 45. Appointed lieutenant colonel and Senior Surgeon to the second AIF in Malaya, Coates was posted to the Australian General Hospital at Malacca, Malaya. After the Japanese invaded the Malay Peninsula in Dec, the medical unit fell back to Singapore; Coates was ordered to sail in Feb 1942 for Java in the Dutch East Indies. The convoy was bombed and the survivors reached Tembilahan Sumatra. 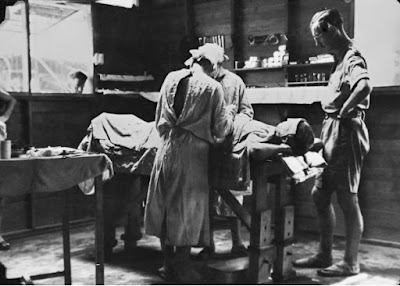 Padang (West Sumatra) was occupied by the Japanese three weeks later. Now a prisoner of the Japanese, Dr Coates was sent to Burma in May 1942. At the notorious camps on the Burma-Thailand Rail­way he cared for hun­dreds of prisoners of war. He later told the Inter­national Military Tribunal for the Far East that he worked in a bamboo lean-to, with his only inst­rum­ents a knife, two pairs of artery forceps and a butcher’s saw. Conditions were deplor­able, the Japanese treatment was brutal and the death rate high.

In Dec 1943 the Japanese sent Coates to Thailand. From March 1944 he was chief medical officer of a huge prisoner-of-war hosp­ital at Nakom Paton where he was responsible for providing artificial limbs, transfusions and surgical app­liances.

Post WW2
With the cessation of hostilities, Coates returned to Melbourne in Oct 1945, and resumed his medical career. He resumed work as hon­orary surgeon to in-patients at RMH, and as the Stewart lecturer in surgery. He was president of the Vict­orian branch of the British Medical Association, a delegate to the Internat­ional Red Cross at Monte Carlo Monaco, president of the War Nurses Memorial Centre Melbourne, and was on the board of management of Fairfield Infectious Diseases Hospital.

Coates was a delegate for the RSL at the Japanese Peace Talks and in 1946 he gave compassionate evidence at the War Crimes Tribunal in Tokyo. In 1951 he went to San Francisco for the signing of the Peace Treaty with Japan.

In 1953 he was made a fellow of the Royal College of Surgeons in London, and in 1955 received a knighthood. After retirement, in 1977, Coates and Newman Rosenthal published The Albert Coates Story. Dr Coates died in Oct 1977 at Royal Melbourne Hospital. 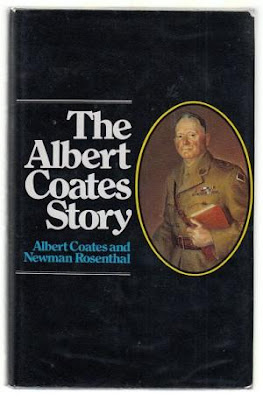 A statue in Ballarat commemorates Albert Coates, the doctor who was a Prisoner of War of the Japanese during WW2. A portrait by the official war artist Murray Griffin is held by the Australian War Memorial, Canberra; and another by Louis Kahan is with the family. In 1971 contracts were signed for the construction of the Union building, library and student housing at Federation University Ballarat. In Sept 2006, the original Union Building was renamed the Albert Coates Complex. Every year Fed Uni holds the Sir Albert Coates Oration, in collaboration with the Albert Coates Memorial Trust.

What an extraordinary life!

Hello Hels, Dr. Coates was one of those remarkable people who stop at no obstacles to learning or service. Too many people give up when encountering the first impediment, let alone bombings and imprisonment. I just brought back my books for this year, but have added the Coates book to my look-for list.
--Jim

He was a high achiever and worthy of having a lane we walk along often enough to enter the QV shopping centre named after him. I have often wondered who Albert Coates was, assuming he was involved in the arts, but given the shopping centre is on the site of the old Queen Victoria Women's Hospital, it all now makes sense. He must have had some involvement at that hospital too.

Medically trained people are usually particularly committed to community service, as Coates showed. But it takes many years to specialise in ONE specialty, let alone more than one - anatomy, surgery, neurosurgery.

Hi Hels - I'm amazed at how much people were able to do and learn back then!! I wish today we were all able to apply ourselves that way. Extraordinary man - thanks for telling us about him ... cheers Hilary

*nod* Most people have great plans for their careers, but give up if anything goes wrong eg an unsympathetic boss or a case of sciatica. But Sir Albert Coates faced every possible crisis I can think of, both personal and national: family poverty, two world wars, physical injury, early death of his wife, prison camp etc etc. I would have crumbled :(

good on you for knowing/guessing that Albert Coates Lane was once the site of Melbourne's first hospital and was later built as part of the former Queen Victoria Hospital. I had no idea of the connection until a long weekend in Ballarat where the guide pointed out Coates' statue and plaques.

most students finish high school at 18, so after 6 focused years on medical studies, they are 24 at graduation. Then a couple of years in a hospital, and 4 or so years of specialisation, a doctor is ready to tackle the world in some comfort.

But Coates was full-time working in a butcher shop etc, an enlisted man in WW1 and married with children long before he finished _just_ his undergrad studies aged 29. No wonder you were impressed.

A working class family with many children in rural Victoria very often had to take their children out of school as soon as it was legal to do so. In this case, at 11. It wasn't an easy start for an intelligent, ambitious lad, was it?