The first part comes from the Blavatsky Archives; many thanks. Helena Petrovna von Hahn was born at Ekaterinoslav in Southern Russia, in 1831. She was the daughter of Colonel Peter von Hahn, and writer Helena de Fadeyev. Her mat­er­nal grandmother was Princ­ess Helena Dolgorukov, noted botanist-writer. After her mother’s early death in 1842, Helena was brought up with the grand­parents. This clever linguist was a sensitive child, and was soon aware that her psychic powers puzzled others.

At 18 she married the much older Nikifor Blavatsky, Vice-Governor of Yerivan Province. The marriage was never consummated and she soon escaped and travelled across Turkey, Egypt and Greece. Only 2 years later, in London in 1851, she met the Mahatma/Master Morya of her childhood visions, and fully accepted his guidance.

In 1852, Helena left for Canada, the USA, Mexico, South Am­erica and the West Indies, then went via the Cape to India and Tibet. Then to Britain, America again, India via Japan and the Straits. She entered Tibet through Kashmir, under-going part of her occult training with her Mahatma. She was again in France, Germany and Russia. From 1860-5, she lived in the Caucasus, exper­iencing a severe phys­ical and psychic crisis. She travelled via the Balkans, Greece, Egypt, Syria and Italy. Then to India & Tibet, meeting the Mahatma Koot Hoomi. Then back to Cyprus, Greece and the Middle East. 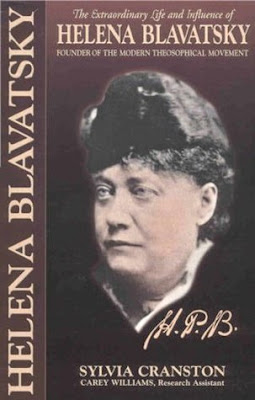 Why the constant travel? In 1873, Helena was specifically instructed by her Teacher to go to New York to meet Col Henry Olcott. The Mahatmas believed Helena was the best means to offer the world the accum­ulated Wisdom of the ages, verified by generations of Seers; that body of Truth of which all re­ligions were bran­ches of one parent-tree. They co-founded the Theos­ophical Society of America  in Nov 1875, where Olcott was made President for life.

The Theosophical Soc­iety's goals were to:
a] form a nucleus of the Universal Brother­hood of Humanity, regardless of race, creed, sex, caste or colour;
b] encourage the study of Comparative Religion, Philosophy and Science and
c] investigate the unexplained laws of Nature.

Helena’s first monumental work Isis Unveiled was published in New York in 1877, outlining the development of the Occult Sciences and of Magic. Her task was to chal­lenge both the entrenched dogmas of Christian Theology and the dogmatic materialistic view of Science.

Arriving in Bombay in Feb 1879, Helena and colleagues established the Theosophical Headquarters. The Found­ers started their first journal The Theosophist in Bombay with Helena as editor, and the society experienced a rapid growth. Alfred Percy Sinnett, editor of The Pioneer of Allahabad, and Helena wrote The Occult World 1881 and Esoteric Buddhism 1883, both generating even more public interest in Theos­ophy. In May 1882 a large estate was bought near Madras for the Theo­soph­ical Headquarters.

Helena was busy writing her next work, The Secret Doct­rine. But it didn’t save her. A vicious attack by staffers Alexis & Emma Coulomb was erupting, about Helena’s fraudulent product­ion of psychic phenom­ena. She returned to Madras on Dec 1884 to sue the couple, but they'd already left.  Alas Helena was overruled by the Theosophical Soc­iety committee and resigned in disgust. She left India for ever.

The "Coulomb attack" was based on partially forged lett­ers, presumably written by Helena, with instructions to arrange fraudulent psychic phenomena. So London’s Society for Psychical Res­earch app­ointed a special investigative committee. Rich­ard Hodgson arrived in India to report on the Coul­ombs’ allegations, which the research committee published in Dec 1885. William Emmette Coleman, a leading spiritualist, was also involved in the Coulomb case. He left the USA for London to obtain from the Scottish missionary Patterson the "original" Blavatsky-Coulomb letters, and published scathing denunciations of Theosophy and HPB in spiritualist journals.

Blavatsky was branded as one of the most acc­omp­lished impost­ors in history, and probably a Rus­sian spy. The Hodgson Report was the basis of later attacks on Helena’s and Theosophy’s honesty. Madame Blavatsky was soon called a plagiarist,  con artist, trickster and a manipulator of males. Coleman focused on her plagiarism. 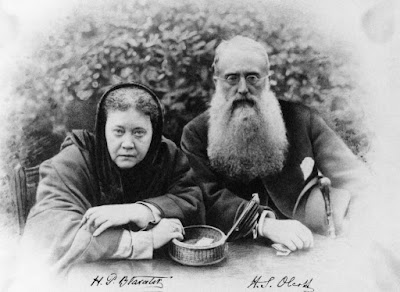 
Blavatsky’s health was damaged, so she focused on writing. The Secret Doctrine was the peak of her literary car­eer. Vol. I dealt with the evolution of the Universe, and the fundam­ental symb­ols of the world’s great religions. Vol. 2 de­scribed the evolution of humanity.  Then Blavatsky published the devotional mystical work called The Voice of the Silence, trans­lated from an Eastern scripture.

Helena Blavatsky aged 60 died in London in May 1891. Her ashes were divided between New York, London and Madras.

How important was Theosophy in modern history? Evidence suggested it significantly influenced the development of other mystical, phil­osophical and religious movements. And even psychological movements in the West. Supporters said Helena was among the mod­ern world’s innovative psychol­ogists of the visionary mind. At the same time that Freud and others were articulating their secularised theory of mind, the Theosophists were rescuing a forgotten psych­ology of the extra-sensory from exotic religion.  Madame Blavatsky was setting the style for modern occult literature.

Theosophy also influenced the growth of Indian national con­scious­ness, inspiring key figures in the Indian independence move­ment. In Nov 1889 Gandhi met Blavatsky. He did not join the Theosophical Society because, with poor knowledge of his own religion, he did not want to belong to any religious body. However in March 1891, he became an associate member of the Blav­atsky Lodge. Three months later Gandhi returned to India. Nehru learned the mys­terious philosophy of Theosophy with his childhood tutor Ferdinand Brooks. Young Nehru (13) was initiated into the Theos­ophical Society in 1902 by Annie Besant, a Theosophist who supported home-rule for Ireland and India.

And consider the importance of Blavatsky and the Theosophical Society in the feminist movement, as described in Theosophy, Gender and the New Woman by Siv Ellen Kraft. Theosophy downplayed the importance of marriage, insisted upon the spiritual independence of women, included women on all levels of the organisation, and gave formal religious authority to women. Blavatsky described the suppression of women as typical of all religions, but was taken to the extreme by Christianity.

Hel
look at http://hyperboreanvibrations.blogspot.com/2011/03/helena-blavatsky-mother-of-new-age.html Hyperborean Vibrations blog said that, despite the wide scope of Madame Blavatsky's enormous bulk of written work, she did not learn English until late in life. Thus her writings showed defects of literary style and clarity.

Helena lived for years in the UK, USA and India, so she must have spoken good English quite early. However she was probably more literate in the languages they wrote at home eg Russian and German.

Our dear and late friend Dame M was a member and regular participant with the Melbourne Theosophical Society. I did not understand it at the time, but I like the sound of it by its goals.

PS If you care to one day write about the Melbourne Theosophical Society, I would be very interested.

I actually thought of that organisation's history when I was writing about "Annie Besant in Australia" in this blog. It is a topic well worth pursuing.

Have a look at some of the important people who were associated with the Theosophical Society: Prime minister Alfred Deakin, Sir A Conan Doyle, D H Lawrence, T S Eliot, Walter Burley Griffen of Canberra fame, Thomas Edison, Nehru and Gandhi etc. Followers might have been looking for exotica, but they were deep thinking, educated and mature men.

Hi Hels - I've come across the Theosophical Society ... but could never get into its thinking - so you've added another layer and yes I knew various deep thinkers were involved or investigated it - but Blavatsky obviously was a very interesting character. Cheers Hilary

good point... I too had never got into Theosophy, even though half my family lived in what is now Southern Ukraine. That got me thinking. I wonder if there are any statues, house museums or plaques to the von Hahns or Blatavatskys in Ekaterinoslav (changed to Dnipropetrovsk Oblast after the Revolution). Possibly not, since HPB was sowing the seeds of universal brotherhood to reduce the effects of modern wars and prevent humanity’s fall under the dominion of organised, unspiritual ignorance.