In 1940 a German in­vas­ion of Britain was possible, but an invasion of the Channel Islands was inevitable. The Germans had to protect their expansion into France from its western flank. And since de­fending the Channel Islands was was "impossible", the Brit­ish Government made evac­uat­ion plans, sending ships to the islands  in June 1940. 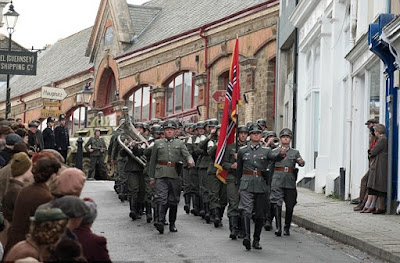 German soldiers who invaded the Channel Islands
in June 1940 and took them over until May 1945.

The Germans invested a fortune into these four small, sparsely pop­ul­ated islands because they were half way bet­ween Britain and Fran­ce. In June 1940, German bombers over the Islands bombed the harbours, killing dozens of islanders. Two days later Ger­man planes landed in Guernsey and met no resis­t­ance. Thus began the only wartime occup­at­ion of the British Isles, by 28,000 Nazi soldiers.

British Channel Island authorities coop­erated and largely ad­minist­ered much of the new legislation, handing over control to the German authorities. Film Director Mike Newell noted that German occupation involved everyday misery. They took the pigs away, they took the radios away, they made the locals talk in German. They made them drive on the right-hand side of the road. Islanders were miserable but out of this some funny stories emerged. 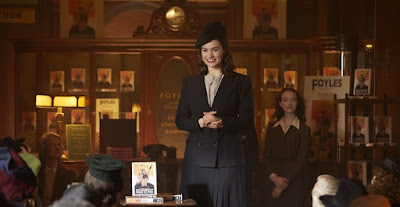 Juliet promoting her book
at different meetings around the country.

And there were tragedies. Which locals coll­aborated with the Germans in discovering who was Jewish? Which locals were helping Polish and Russian POWs escape the German death camps in the Channel Islands? Which women were sleeping with German soldiers for extra food?

Starvation was widespread. Only in Dec 1944 could the International Red Cross get a food ship to relieve starving island­ers. Lib­er­ation fin­ally came when an Allied task force arrived on Guernsey in May 1945, and were greeted by crowds of joy­ous islanders. The islanders may have been British sub­jects but they had not been defend­ed, fed or rescued by their own nat­ion.


Author Juliet Ashton (Lily James) starred in this adaptation of a success­ful novel written by Mary Ann Shaffer and edited by Annie Bar­rows, The Guern­sey Literary and Potato Peel Pie Society. In 1946 Juliet and her publisher Sidney Starke (Matt­h­ew Goode) were attending a reading of her book. When she was not carrying out pro­m­­otional duties, Juliet spent most of her time at lavish parties and clubs with her charming American GI boyfriend Mark Reynolds (Glen Powell) and inspecting real estate with her publisher Sidney. Great post-war clothes and great parties. 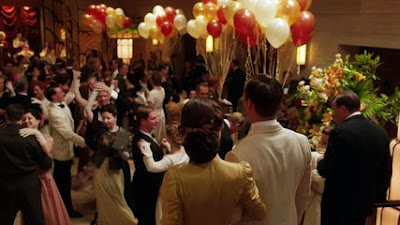 Juliet and her American fiance' Mark.
At a jazz dance

In a flashback we saw 1941 on the Guernsey cliffs where fig­ures were drunkenly stumbling home in the dark, breaking the German cur­few. They had been feasting on roast pig hidden from the invaders, who had confiscated the British island’s livestock to feed the German sold­iers, and were caught! The quickest-thinking drinker, El­iz­abeth McKenna (Jessica Findlay), babbled about a literary society whose name was quickly invented by the Guernsey postmaster Eben Ramsay (Tom Court­enay), Amelia Maugery (Penelope Wilton) and her daughter Elizabeth McKenna.

The film re-focused on London-based Juliet as she was suffering through a press tour across 1946 Britain, promoting her new book. Unexpectedly she re­c­eiv­ed a letter from an un­known Guernsey man, Dawsey Adams (Michiel Huis­man), request­ing the loc­ation of a London bookshop. Intrigued by his mess­age, she wrote back.

Looking into one high-ceilinged flat, Juliet was terrified by a flashback to the bomb-ravaged home in which her parents had been killed. So when the letter arrived from Guernsey, she planned to leave London as soon as poss­ible. She accepted American Mark's marriage-proposal before sailing over the Channel, even though she believed in gender equality while Mark did not.

The film moved between occupation (1941) and post-war lib­eration (1946), when the Guernsey book club was still going strong. In addition to Dawsey and Eben, the members now included Eben's grand­son, Eli (Kit Connor), who was sent to the mainland days before the Germans arrived and Isola Pribby (Katherine Parkin­son), a redhead fond of drinking her own gin. Most not­able was the older Amelia, whose ambivalent attitude toward Juliet was infl­uen­ced by the terrible grief over the death of a pregnant daught­er and the disappearance of Elizabeth. Had Eliz­abeth survived? 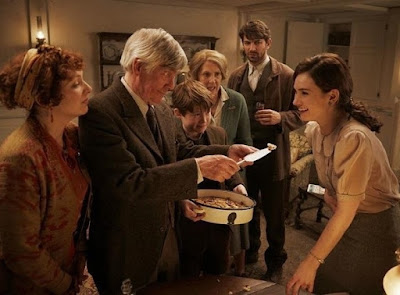 Citizens on the mainland were just starting to recover from the misery of WW2. But the people of the Channel Islands had experienced far worse horrors during the war, horrors that main­landers didn't known about.

I felt that the recent German occupation of the Channel Islands was poorly investig­ated by the film. Not surprisingly Juliet had no idea why her religious landlady acc­used El­izabeth of being too “friendly” with the enemy. Nor did Juliet un­d­erstand why a nasty local collaborator like Eddie Meares (Andy Gather­good) was shun­ned by the islanders for his role in Elizab­eth’s disapp­earance. Jul­iet's need to find Elizabeth’s true story domin­ated the story; members of the book club members helped her.

I personally don’t think romance should have been the most impor­t­ant theme in the film. After all Juliet's ambivalent mental state was crystal clear, especially in London in which her nerves become jagged. Handsome Dawsey, on the other hand, was not ambivalent. 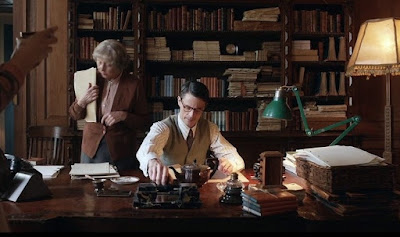 Book club members will appreciate how the love of literature can link people together, even improbable co-members.

Hello Hels, American and other mainstream films almost always shoehorn in a romance, no matter how foreign to the plot or the original source. The romance then takes center stage, and thus another great book or story is ruined in the movie version. This of course excepts books which are about romances, but even then the Hollywood version will enhance the romance at the expense of any other plot or historical elements.
--Jim

Helen, we had a long hard look at the Channel Islands in class. But Shaffer's obits said she did not know about Guernsey till she accidentally spent time there in 1980 or whenever. How strange.

Hi Hels - I've never been to the Channel Islands ... something I must redress when I get home. But loved this book and the film - certainly explained a little of the ghastly and fun happenings that occurred at that time - cheers Hilary

of course you are correct... nothing sells like romance and, better still, sex. I wouldn't have even mentioned it but the heroine of The Guern­sey Literary and Potato Peel Pie Society film has three important tasks:
1. to write about the islanders' literary experiences during and since the war
2. to track what happened to Amelia's daughter Elizabeth and to bring some closure to for the family and
3. to restore normal life for herself after her parents' bombing deaths and help others resolve their anger/bitterness after the German occupation ended.

do you remember how little the students, all intelligent and well read members of the British Commonwealth, knew about the Channel Islands during WW2?

Mary Ann Shaffer was an American citizen, so she may not have even known that the Germans invaded and occupied the islands for most of WW2.

I accidentally discovered the book, ages after I toured Jersey and Guernsey. What did you think of Shaffer's epistolary style of novel i.e written as a series of letters?

As usual, I knew nothing about the Guernsey and Jersey being occupied. Many in the world were victims after being abandoned by Britain, including former Asian colonies. I try to take an open view of people's actions in times of war. Survival is a very strong instinct, perhaps stronger the moral values.

you are not alone. Churchill decided that the islands could NOT be defended militarily. So once the volunteers were allowed to sail in British ships off the islands _before_ the invasion, the British island citizens would never be protected again.

Thus there were/are two huge gaps in wartime information. Firstly the British army didn't know what was happening to its citizens on the islands. The Bailiffs took over the civil, but not the military, functions of the Lieutenant-Governors but that didn't help the islanders.

Secondly the German concentration camp, and the Germans' prisoner of war records, were utterly destroyed on the days they left the Channel Islands. There is NO way that Russian or Polish prisoner bodies could ever be identified or repatriated.

Hels why was the film mostly filmed in Devon? The Channel Islands are lovely to look at.

True.. it seems that a lot of the filming was done in Sandmouth near Bude. Low tide in Sandymouth is indeed beautiful, but perhaps more importantly, modern Guernsey was too over-built for a 1946 story.

Naturally I loved the outdoor footage!

This is being very much talked about here at the moment. I am really looking forward to seeing it and trying to avoid building my hopes up too much!
PS: We just returned home from four days in Budapest where the 1898 New York Cafe looks very much like the Cafe Imperial in your previous post (and there is a fabulous synagogue in Budapest too!)
CLICK HERE for Bazza’s heuristic Blog ‘To Discover Ice’

I loved the film because it is set in an era I am fascinated in, with actors (especially Lily James, Matt­h­ew Goode and Katherine Parkin­son) who were terrific. But if you have not read the book yet, read it before seeing the film and not after.

Welcome back from Budapest. This week in class we will be tackling the growth of cafe society in places like Vienna, Prague and Budapest :)

There is a strong pavement cafe society in Budapest (and in Sydney!)

I wonder if outdoor cafes and restaurants depend for their popularity on great weather (eg Istanbul), wide footpaths/boulevards (post-Haussmann Paris) or perhaps stunning water views (Sydney).

I have seen some in Barcelona and London where narrow footpaths were not an obstacle (except to pedestrians!)