In the 1780s a St Petersburg nobleman serving Empress Cat­h­erine the Great retired from the Royal Household and moved to Moscow. There he decided to build a house and invited architects from Italy. Well-versed in Russian taste and with a keenly honed feeling for Mus­covite architectural style, Italian architects built a baronial Bar­oque man­sion a la russe. Baroque details run throughout the interiors of the building. The house passed to a German aristocrat in the mid C19th as part of his future wife’s dowry. 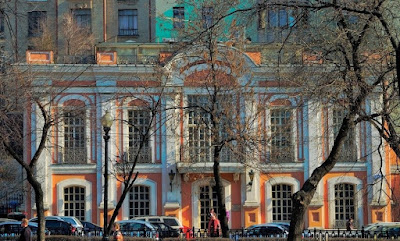 Financial ruin forced the new owner to open a pharmacy in the building, successfully. Downstairs, the customers waiting for their medicines to be prepared could drink restorative drinks, teas, coffee, or hot chocolate while waiting for their medicines to be prepared.  At the same time, a library full of reference books was installed on the upper & mezzanine floors. The library collection grew to 3,000+ volumes.

At that time Alexander Pushkin (1799–1837) was born into Russian nob­ility in Mos­cow. During the Romantic era, Pushkin became well known as a poet, playwright and novelist, possibly the founder of mod­ern Rus­sian lit­erature. What a tragedy that he died in his 30s, in a duel.

Tverskoy Boulevard was opened in 1796 and it became an instant hit for writers and peop­le from the high society. The Boulevard and its surrounding area played a significant role in Pushkin’s life, and we can see the importance of Pushkin’s name. When the boulevard opened in 1796, it became a fav­ourite place among Moscow high society for a stroll. Café Pushkin on the Bulvar, is close to Pushkin Square, the place where the famous writer used to drink his morning espresso. The building was renov­ated to look exactly like a Russian aristocrat's home of the mid 1820s, reached by the purple line to Push­­kinskaya Ploshchad. 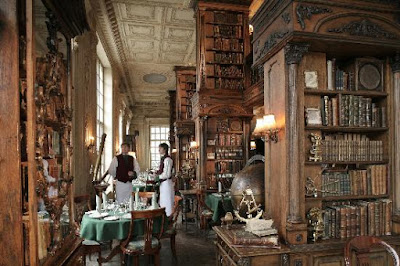 The children of Moscow and St Petersburg’s nobility enjoyed child­ren’s balls at the house of the Kologrivov family, which stood where the Moscow Gorky Arts Theatre now is. It was there that Pushkin met and married Nat­al­ya Goncharova in 1831. At the far end of the boulevard, near the Nikitsky Gates, is the church where the couple married and had their four children baptised. The statue of Pushkin originally stood on Tverskoy Boulevard, too.

The creation of Café Pushkin was serendipitous. In 1964 the famous French singer/composer Gilbert Bécaud performed in Moscow. When he return­ed to Paris he wrote the song "Natalie" and dedicated it to his delightful Russian guide. The song goes: “We are walking around Mos­cow, visiting Red Square, and you are telling me learned things about Lenin and the Revolution, but I’m thinking, I wish we were at Café Pushkin, looking at the snow out­side the windows.” “She was talking so seriously of the October Revolution. As for me, I was thinking that after Lenin’s tomb, we would go to Café Pushkin and drink hot chocolate”. 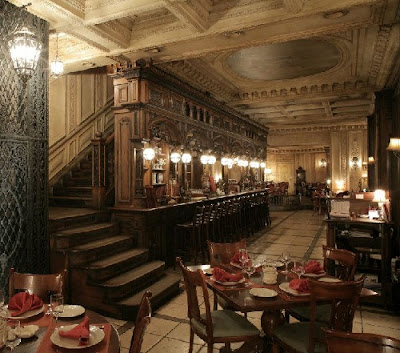 The song became very popular in France, and soon French visitors were travelling to Moscow, specifically to find this aristoc­ratic Café Push­kin. They couldn’t find it of course; it existed only as a musical fantasy. But it was the song that inspired entrepreneur Andrei Dell­os, a restaurateur with Franco-Russian family, to create a real café.

After 35 years of poetic fantasy about Cafe Pushkin in the above-mentioned Baroque mansion on Tverskoy Bld, it became a real­ity thanks to Andrei Dellos. In June 1999, the restaurant had a grand opening at which Gilbert Bécaud personally performed his iconic song, Natalie!

Back in the Soviet days when the café was opened, it was known as the only upper class, expensive restaurant where Russians could socialise and talk freely without fearing KGB eaves-dropping.

Now people eat at the Pushkin for its delicious food, food that my late mother always made at home: borsht and sour cream, blinchiki-pancakes with black caviar, Boyar shchi-soup with cabbage. The pelmeni-stuffed dump­lings can be had with one stuffing or another eg salmon, wild mushrooms, zucchini and cheese, meat or chicken. And as an extra, get a glass of ice cold vodka with the soup. And some French influence on the presentation.

My late parents owned half of a travel agency, and had very special privileges on Aeroflot and in Russian facilities. They felt they were surrounded by old world charm and beauty in Pushkin Café, and photographed the same objects that other visitors mentioned: book libraries covering the walls, a huge harp, the original pharmacy counter etc. See the original porcelain bottles with Latin labels, used in the preparation of medicinal powders and tinctures, with pharmaceutical scales. The many globes, microscopes and telescopes suggest their former German owners' interest in the world of science. 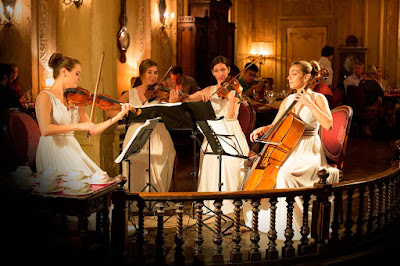 Café Pushkin concert
The restaurant space is divided into different rooms and each one has a different theme. The most simple and cheery café is on the first floor; a lovely restaurant is on the second floor; and the darker, more clubby library-eatery on the top. Clearly it is warmly recommended for visitors to Moscow who want to experience Russian history and culture. Be surrounded with books by Pushkin, Gogol, Tolstoy, Chekhov and Dostoevsky.

Hi Hels - fascinating article on the Cafe Pushkin ... really interesting ... I'm reading about the exploration of Siberia in the 1720s - 30s through a novel 'Island of the Blue Foxes' - via Titus Bering ... really amazing they ever got through to explore - cheers Hilary

What a wonderful place. Just seeing the name that we don't seem to hear anymore, Aeroflot reminds me when I wone a trivia quiz by knowing that the internal Soviet tourist bureau was called Intourist.

Tverskoy Boulevard is a perfect location. A Pushkin guide showed us the Club of the Nobility, Yar restaurant, plaques on poets homes where he visited, the Pushkin statues.

thanks for the reference. I love it when blogging readers can recommend (or reject) novels, reference books and journal articles. Especially since both my mum and dad's family came from Russia (now Lithuania and Ukraine).

my late father didn't make huge profits running his travel agency, but he more than made up for it spending as much time as possible in the Soviet Union and surrounding countries. My late mother was a journalist and writer, raised on Russian literature - she couldn't get enough of Tolstoy, Gorky, Pushkin, Chekhov, Dostoyevsky etc!

You are so right. Look what Wiki says: In 1920 one house was handed over to writers' organisations, and it became the country's literary and cultural centre. Yesenin and Mayakovsky gave readings here. Many Russian writers described Tverskoy Boulevard in their books, for example Leo Tolstoy, Anton Chekhov, Ivan Bunin, Alexander Pushkin and Mikhail Bulgakov. There are many museums, theatres and galleries here.

Hello Hels, What a great idea to reuse and enhance an historical interior. The trend is usually the opposite--to tear out a building's historic features and showcase its "exposed brick" walls, usually adding a few ferns to the decor. I remember one coffee house that opened in an old pharmacy in Cleveland that wasn't expensively renovated, but did have the original counters, tin ceiling, and walls full of small drawers for the medicines--absolutely fascinating!
--Jim

that reminds me of facadism, protecting and preserving only the frontage of historical City buildings in new developments. It is an architectural compromise that makes local governments happy but brings the history and heritage people to tears. (I say City buildings only because they abut each other and no-one can see the sides anyhow).

Cafe Pushkin was fully functional even before it was converted to its current use. Can you imagine if the builders demolished the pharmacy's bar and equipment, the library of 3,000+ precious books, baroque interiors, scientific equipment etc etc?

This is not the view of Moscow that we are usually shown! I can just imagine Gilbert Bécaud being there although I don't know that song.
CLICK HERE for Bazza’s ubiquitous Blog ‘To Discover Ice’

good on you for knowing Gilbert Bécaud. I now think that if it was not for him writing Natalie in honour of the Russian woman who showed him around this part of Moscow, Andrei Dell­os would not have been inspired by the crowds of tourists to create a real café. And bless Gilbert Bécaud's heart for singing at the opening.

I wonder if there have been other examples of fantasy facilities being taken out of music, literature or art and converted into reality.

Life imitating art! Oscar Wilde said it's that way round most often.

Oscar Wilde had some serious lapses in judgement and ended up tragically, but he was spot on ..regarding life imitating art. I thought of that when I was writing about George Edalji in 1903 and Sir Arthur Conan Doyle.