Celebrating the founding of Czechoslovakia 1918-2018

Independence came at the end of WWI when the Austro-Hungarian Emp­ire fell apart. It marked the first time since the Battle of White Mountain in 1620 that Bohemia was not under foreign rule. The First Republic was declared on 28th Oct 1918 when a Czech novelist read the independence proclamation of the sovereign state of Czech­osl­ovakia in the St Wenceslas Square. So the reading in the square was seen as the official start of the new country.

During the cele­brations in Nov 1918, a mob tore down a Victory Column on Old Town Square. It had been there since 1650 and celebrated a battle that occurred on Charles Bridge at the end of the Thirty Years’ War. Some said the column glorified the Hapsburg domination of the country.

This year locals and tourists are invited to comm­em­orate the est­ablishment of Czechoslovakia in 1918, following the end of WWI. To mark the 100th anniversary, hundreds of cul­t­ural, social and sport­ing events will take place throughout 2018 that high­light the First Republic Era i.e the inter-war years. As Czech Tourism detailed, the celebrations will be commemorated by all major Czech institutions, including church, army and cul­tural groups. And families. My husband left Prague in Dec 1951.

The National Technical Museum has an exhibition called Made in Czech­oslovakia 1918-92 – Industry That Conquered the World: Škoda and Tatra car companies, Bata footwear and traditional pro­ducers of glass and fashion jewellery. Visitors can also go on a tour of the original methods for brewing beer, noting that the Czechs drive more beer per head than any other nation in the world.

The Ministry of Foreign Affairs examines the disintegration of the Austro-Hungarian empire & the post-war arrangement of Europe in a series of exhibitions, conferences & lectures. 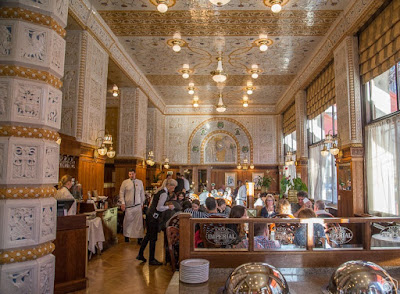 
The Labyrinth of the Czech History is showing at the Imp­erial Stab­les. The exhibition shows documents and objects show­ing key mom­ents in Czech history from the medieval era eg Přemysl Otakar II’s funeral insignia, Golden Bull of Sicily granting royal rights to Bohemia, and documents relating Charles IV & Rud­olph II. [Em­peror Rudolph II was the thesis topic of a fell­ow st­ud­ent/close friend at Melb­ourne University, and the name of my beautiful black labrador].

Prague Cas­tle still funct­ions as the president's seat and state offices. The Prague Castle Riding School is showing The Elem­ents of State­hood until October i.e the history of state symbols. See the high­est state decorations awarded during the last 100 years, the presidential Škoda VOS car and prison letters from Mil­ada Horáková. The Castle Guard, which was also established at the same time as the new country, is showing photographs and objects from the hist­ory of this military unit. Its members included those who guarded Prague Castle, soon after independence was declared.

The National Museum, being renovated, will have a temporary exhib­ition, examining Jan Masaryk as a Phenomenon i.e first president of Czechoslovakia. The Old Town Hall is also undergoing extensive repairs and the Astronomical Clock is being rebuilt. All of the repairs to the clock and tower should be finished by July 2018.

Each October, lights dance across Prague’s architectural landscapes and glowing art installations line the streets for the Prague Sig­nal Festival. Recently the largely free outdoor exhibits have grown into the largest cultural event in the country, drawing 2+ million attendees. In 2018 a video mapping performance will ex­plore the ornate walls of Dvorak Hall inside the Rudolfinum. A live sym­ph­ony orchestra provides a soundtrack of Smetana, Dvorak and Tchaikovsky.

The Olomouc Museum of Modern Art is presenting artistic movements in Central Europe c1918-early 1920s, along with partners from Slov­ak­ia, Hungary and Poland. One section of the Alfons Mucha Museum, in the Kaunický Palace Prague, displays the artist’s relationship with his home city. 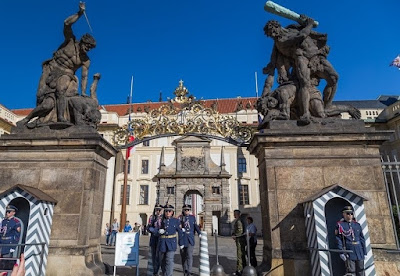 The Czech Philharmonic Orchestra will celebrate with an open-air concert. It is performing concerts of Leoš Janeček’s opera, The Cunning Little Vixen and has an exhibition entitled Bedřich Smetana – My Homeland, in honour of the Czech composer. A special concert organised by Czech Radio will play the Czech and Slovak National Anthem, Sinfonietta by Leoš Janáček and Dvořák’s Symphony #9 . The opera house is still gorgeous.

There will be a grand military parade this year, like the 90th anniversary of Czechoslovak Independence. Back then, the parade on Evropská St in Prague 6 involved the Czech military along with Prague’s rescue services, police force, firefighters and paramedics. The 3 k parade featured 2,000+ people and 200 military vehicles, helicopters and airplanes.

Examine the architectural vis­ions of Adolf Loos, Josef Gočár and Jan Kotěra, or around the gall­eries of Alfons Mucha, František Kup­ka and Emil Fila. The architecture dur­ing the First Republic was attractive. In Brno a wealthy Jewish German-speaking couple Fritz and Greta Tugendhat built a new family home that became one of the most celebrated mas­t­­er­pieces of mod­ern­ism, Villa Tugendhat by sp­l­endid architect Ludwig Mies van der Rohe. The home was added to the UNESCO World Heritage list because of its unique int­er­iors, space, materials and unique technical gadgets.

The very expensive const­ruction of Villa Tugendhat was inconsp­ic­uous on the exterior and lux­ur­ious on the interior, as was typical for Mies van der Rohe. He created an open living area, wonderfully conn­ected with the garden via glass walls. The furniture was largely designed by Mies van den Rohe for the house, and although many items were lost, a few were later re­turned to family descendants. Thus many furniture pieces on the first and second floor are replicas. 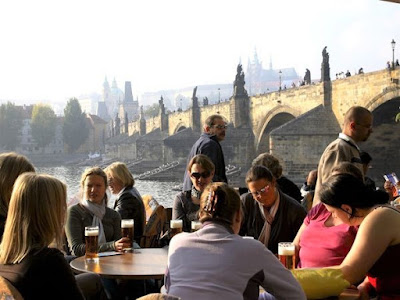 The Mucha family returned home to Prague where Alfons décorated the Theater of Fine Arts and created the murals in the Mayor's Office at the Municipal House. In 1918, Mucha designed the new postage stamps, banknotes and other government documents for the newly independent state. See Alfons Mucha’s relationship with his home city in the Mucha Museum in Kaunický Palace, Prague. The exhibition shows Mucha’s studio with original furniture, pictures of his family and a set of studio photos taken by Mucha in Paris. The exhibition also features a half-hour documentary about Mucha’s life and work.

Congratulations to all the ex-Czechs here. Good country.

Hello Hels, I cannot think of Czechoslovakia without thinking of the surreal Czech animators, especially Jan Svankmajer. I tend to like his earlier short films better, especially the brilliant Jabberwocky. His live-action animation seems to depict a run-down, derelict Czechoslovakia, which was taken as an implied criticism of the then-Communist government (although it should be noted that Svankmajer was an expert creator of artificial aging and textures). His interests are wide-ranging. He also made animated adaptations of Faust, Horace Walpole's The Castle of Otranto, and Edgar Allan Poe's Fall of the House of Usher. Although these are animations, they are probably best avoided by small children!
--Jim

Many thanks. I will add your contribution to the year of celebrations to my post. Alfonso Mucha worked for ages in Paris but was, at heart, always a Czech.

Correct! Joe knows all the Czech and Slovak families who came to Australia in the 1950s. They had a wonderful social club in Sydney where the single boys and girls met each other.

Jan Svankmajer career was interesting, especially since his most productive years were 1965-2015 and not the inter-war years. No wonder his productions were seen as funny, tragic and critical, all at the same time.

This is a very timely piece Hels . We are heading to Vienna and Prague in middle of June although it sounds as if Prague is a bit of a construction site!What do you think is unmissable apart from the obvious things to see in Prague and surrounds .?

Re Mucha, his great work the Slav Epic, a cycle of enormous paintings depicting Slav history, is currently on tour in Japan, and is expected to return to the Czech Republic this year, though it does not seem to have been decided where it will be displayed on its return. It was for a few years in the Trade Fair Palace, one of the few places with sufficient space to hang the vast canvases.

I had no idea you were so interested in the Czech Republic or that you blog in KRUMLOV - BRITISH EXPATS. That is very cool.

Originally I hadn't even included Mucha in my post on the Czech year of celebrations. Not because he was born in, raised and loved any country as much as his Czech homeland, but because his art always looked so French to me. If Slav Epic is as large, complex, comprehensive and dripping with nationalist history as historians suggest, it deserves to be in the Czech Republic during 2018. And it deserves an appropriately epic place in which to be exhibited.

The symbol of the Czech state was created in 1920, shortly after the founding of the first independent Czechoslovak state. White (Bohemia) represented the sky, red (Moravia) represented the blood shed for the freedom of the state, and blue for Slovakia. The 13th century Czech coat of arms, with a shield divided into 4 squares, had a 2-tailed, white, crowned lion. The Moravian eagle was adapted from the St Wenceslas eagle of the Holy Roman Empire.

Émile Peugeot applied for the Czech lion trademark in the 19th century. Even now that the new Peugeot lion has been modernised, the Peugeot is still called The Lion in some countries.

Until you went to visit the Peugeot Centre near Prague years ago, I had never heard of the Czech lion being utilised by a commercial company. Hopefully the city and the car company are still growing nicely together.