I had enjoyed Australian holiday camps every summer throughout high school and university. Wonderful memories and activities!! But 1971 was my first year in Europe and Britain, so I was very keen to visit Butlins for the first time.

In the 1920s, young Billy Butlin (1899-1990) was staying at a Bed & Breakfast in Barry Island, Wales. Everyone knew that guests would be locked out of their accommodation after breakfast and only let back in when the prop­rietor opened the door for tea. But But­lin hated the boredom, and decided to create a new kind of holiday de­st­ination, one where residents wouldn’t be subject to the relentless rain outside.

Butlin, the son of fairground owners, decided to develop a holiday facility where on-site entertainment would be provided for the guests during the day. Having arrived in Skegness at the height of the foreshore development with his hoopla stall, Butlin went on to build and operate a new amusement park. In fact he opened a perm­an­­ent fair­ground and zoo in Skegness in 1927, becoming the first Brit to franchise American Dodgems bumper cars and import them into Brit­ain. 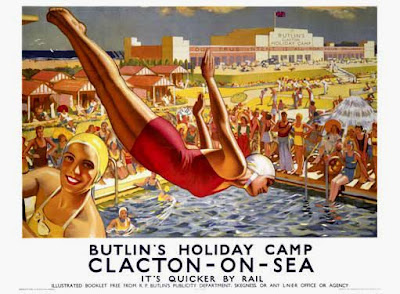 Following his success in developing amusement parks, and based on what Butlin learned in Canadian family holidays, he decided to move on to camps. The first Butlin’s Holiday Camp, close to Skeg­ness, was officially opened in 1936 by Amy Johnson, the first woman to fly solo from England to Australia. On the opening night, an eng­ineer was asked to entertain the guests with a comedy rout­ine. The guests loved it, and thus the Butlin’s Redcoat was born. The red­coat’s duty was to keep the guests amused! Skegness camp soon incl­uded exciting facilities, such as dance halls and sports fields.

Within a year Skeg­ness had doubled in size, so two years later Billy Butlin's chose Clacton-on-Sea for his second camp. In 1938, Dovercourt Camp was built but it was taken over by the gov­ern­­ment to house the Jewish children who fled from Nazi Eastern Europe to Britain as part of the Kinder­trans­port Train.

Construct­ion of the Filey Holiday Camp in Yorkshire began in 1939. Again, with the outbreak of WW2, building at Filey was completed by the Army. Sim­ilarly the camps at Skeg­ness and Clacton were hand­ed over as training camps for troops. Butlin built the gov­ern­­ment more camps, trusting that they would be returned to him after the war’s end. 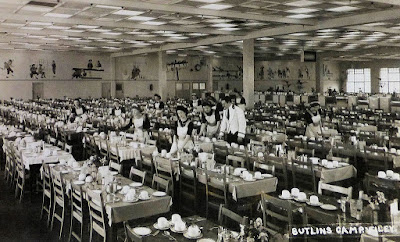 Dining hall at Filey Camp (above)

Vienna Ballroom at Filey Camp (below) 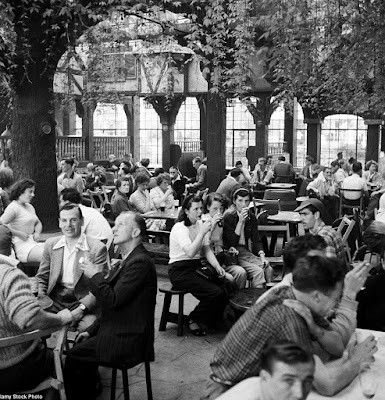 Butlins ensured that family entertain­ment and activities were available for the equivalent of a week's pay. His empire grew when he opened camps in Ayr in Scot­land, Saltdean in Essex, Blackpool and Clifton­ville Kent. New sites opened in the 1960s in Bognor Regis in Sus­s­ex, Mine­head in Somerset and, appropriately, Barry Is­land in Wales! Butlin’s Holiday Camps had become an icon of British holidaymaking. He received his knighthood in 1964.

Then the camping world changed. As Brits fell in love with holid­aying abroad, the special quality of the British seaside and the att­ractiveness of basic holiday camps faded. Cheap air flights and package holidays provided strong comp­et­it­ion to Butlin in the 1970s. And Mediterranean resorts had much better weather and more exotic food!

His numbers went down, but his camps remained open for business anyhow, seeking continuous development. The famous mono-rails were built in Skegness & Minehead, chair lifts became popular, and heated indoor pools with underwater windows and revolv­ing bars were loved! The number of camps peaked at ten in the late 1960s-early 70s. 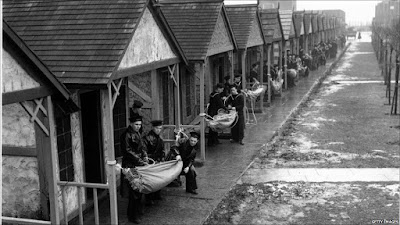 In 1968 Billy's son Bobby Butlin took over the management of But­l­ins, and in 1972 the business was sold to the Rank Organisation for £43 million. It also had a specific image problem of being seen as providing regimented holidays, suitable only for the working class!

Ayr and Skegness gained separate self-contained hotels within their grounds, hotels that were refined enough. In later years, they were joined by further hotels in Scarborough (1978), London (1993) and elsewhere. In the 1960s and 1970s, the company also operated the Top of the Tower revolving restaurant in London.

The Skegness Esplanade and Tower Gardens Lincs, where Billy Butlin opened his first holiday camp in 1936, is the first Butlins holiday camp named as a Grade II Listed site. 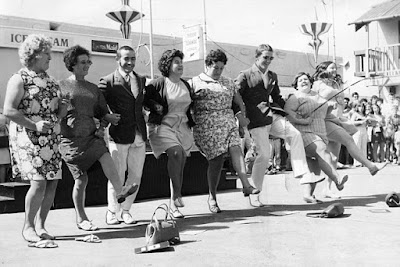 Colin Ward’s book Goodnight Campers: The History of the British Holiday Camp 2010 records the development of the British holiday camp from the pioneer camps during the 1930s and 1940s… to the golden years of the Pontin, Butlin and Warner camps of the 1950s and 1960s. Commercial mot­ives for the Butlin camps were important, but so were ed­uc­ational ideals, trade unions and welfare consid­er­ations, cult of the outdoor life and political utopianism. Butlin’s grand vision had been to provide good value holidays to Britain’s hard working population – and he did. These were the great years when holiday camps off­ered freedom, health, family fun and possible sex.

But you don't say what your Butlins experience was like! R went to one in York in the 70s somewhere with a mate who went on to become his brother in law, ex now. There was a tv series in the 80s I kind of remember and it did not paint them terribly well. As I began reading your post, and you later made mention of it, the El fish and chippo places on the Costa del Sol have replaced holiday camps.

If I was choosing the nicest beach holiday resort in the UK, I might not think immediately of Skegness.

You are right to mention the poor image that Butlins had. While I was growing up there were jokes about holidaymakers forming escape committees! I never went but my father and step-mother were very keen ballroom dancers and loved the south coast Butlins hotels for that. They still have many large hotels around the UK coast and they still have the camps, I think.
Many popular entertainers started out as Redcoats: Des O'Connor, Michael Barrymore and Jimmy Tarbuck were all former Redcoats.
CLICK HERE for Bazza’s barmecidal Blog ‘To Discover Ice’

Hello Hels, I love those British holiday posters. I particularly recall the one called "Skegness is so Bracing." Perhaps you featured that one before?
--Jim

Hi Hels - thanks for visiting and your comment on the naming of Canada. I never went to a Butlins ... but I know people who used to go still occasionally go to that sort of resort ... suits them ... there's entertainment and is fully inclusive ... I've always sort of wanted to go - but never will now. This was a lovely resume ... cheers Hilary

I was still in my hippy days back then and the idea of dancing with a laughing middle aged redcoat male was unthinkable. But the concept of an affordable family holiday package in decent accommodation was very impressive.... and still is.

There were many references to Butlins on tv, but the only series I could find was Hi-de-Hi! a 1980s comedy programme set in Maplin's holiday camp.

that is very true. There are lovely beaches and beach towns in Lincolnshire, all the way to Grimsby and beyond. But I must admit that sometimes the names are a bit off-putting. Skegness, Grimsby, Saltfleetby Theddlethorpe, Moggs Eye, Cleethorpes etc sound harsh.

Skegness was initially selected because families had to be able to get to Butlins easily by public transport (trains) in the 1930s and because the camp site facilities would be cheaper than elsewhere.

I am on your parents' side. As time went on and Butlins became more and more elegant, activities like ballroom dancing became very popular. And eventually the most elegant Butlins facilities dropped the name altogether.

Now the entertainment centres, restaurants and bars are quite classy.

Spouse and I always did totally independent holidays, but once we hit a certain age, organised holidays started to sound more and more suitable. Thus we hire a car during the day and tour all around, but get back to the hotel/chalet at 5 PM for cocktails. Then dinner is prepared by someone else (bless their hearts) and an on-site evening of bridge tournaments, concerts or the cinema.

Tourism and railway posters made the best use of the Art Deco style EVER! Sharp, full of movement, strong colours and no writing to clutter the middle of the poster. I found this one on ebay:
https://www.ebay.com.au/itm/Butlins-Butlins-Poster-30-x24-j4576/332498875423?hash=item4d6a7a341f:g:-SkAAOSwk1haQUib

I found this report thanking Butlins in Dovercourt and published in Jan 1938 by the Women’s Voluntary Service Report worker N De Selincourt:

“The camp belongs to Butlins Company, who built it for the purpose of letting huts to town people in summer at the rate of about £2 a week. It is used as a kind of clearing station for German and Austrian Jewish and non-Aryan refugee children until arrangements can be made for their future. These children are from 5 to 18 years of age, and their parents are mostly dead or in concentration camps. The Nazi authorities are apparently only too glad to get rid of the children, with the exception of boys of seventeen and over, whom they require for labour. They come through Holland, are only allowed to bring one mark out of Germany, and come into England in batches of varying numbers.”

Although I believed Butlins' contribution to the war effort, it is always good to get external confirmation. The Women’s Voluntary Service Report was timely and informative.

Thanks for the information and links you shared this is so should be a useful and quite informative!
click here

great topic, isn't it. There are only three Butlins still standing, in great locations - Bognor Regis, Minehead Exmoor and Skegness. Are any of your students involved in these types of family holidays?