Vincent van Gogh and his love of Japanese art


When trade with Japan resumed in 1854 after cent­uries of isol­ation­ism and cul­t­ur­al blockade, a craze for its culture swept across France. But the French concept of Japon­is­me was not invented until the early 1870s. Art galleries in Paris were showing Oriental work, shops sold porcelain, lacquer ware, screens, fans and prints for homes, and 1878 World’s Fair showed many Far Eastern treasures to visitors. 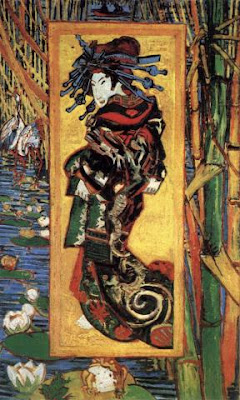 French artists and designers studied Japanese woodcut prints; the development of modern painting was affect­ed by the woodcuts’ stylis­at­ion, flattened perspectives and brilliant colours. Thanks to Art Eyewitness we can see that French artists like Manet, Monet, Degas and Cassatt were influenced by the relaxed placement of figures and striking coloration in these depictions of Japan’s floating world.

Vincent van Gogh (1853–1890)’s contact with Japonisme can be seen in his 1884 still-life in which he painted brother Theo’s cloisonné vase. Leaving his parents’ Nuenen home for Antwerp in 1885, Vincent bought his first Japanese prints. Urged by Theo to follow the Impressionist movement to make his art look more modern, Vincent was off and running.

In 1887 he began to make copies of prints: of Hiroshige’s The Res­idence with Plum Trees at Kameido. Two of the three portraits that he painted of Père Tanguy that year showed the dealer sitting against a backdrop of the Oriental prints that he traded. Kabuki actors showed cherry trees in blossom and Mount Fuji crowned his head. 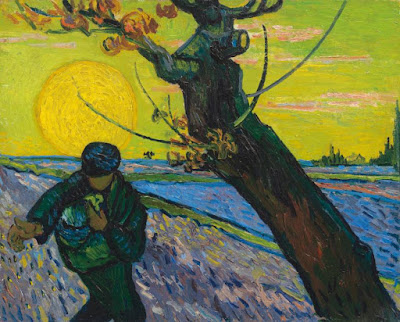 By 1888 his visual vocabulary, with its decorative planes of garish colour, came literally from the woodcuts that he loved. He admired the bold way that Japanese prints crop­p­ed images, made striking use of strong colours and fixed on the beauty of nature. That very year was the pivotal point in the Dutch­man’s art, refining his tech­nique.

Vincent enjoyed painting in/near Paris throughout 1886 and it was then that he became openly interested in Japanese art. His pal­ette began to move away from his Dutch-influenced darker, tradit­ional colours, towards more vibrant hues of the Impression­ists. The art­ist amassed a large collection of c600 Japanese woodcut prints (now in the Van Gogh Museum in Amsterdam), and his paint­ings com­bined Impressionist colours and distinct Japanese ov­er­tones. He wrote “My studio’s quite toler­able mainly because I’ve pinned a set of Japanese prints on the walls that I find very div­erting. You know, those little female figures in gardens, horsemen, flowers, gnarled thorn branches.”

Disappointed by his futile efforts to become a priest and no longer believing that harsh suffering was the way to spir­itual achieve­ment, van Gogh turned instead what he saw as a cultural primit­iv­ism. Gauguin’s Arcadia focused on the tropics while Van Gogh preferred the Far East.

Moving to Arles in 1888, Vincent promoted his Eastern vision on top of colourful and sunny southern France. His drawings, done with a newly adopted reed pen, used the dots, streaks and hatchings, the sharp lines and short dashes of the master Hokusai. With the Japan­ese model, he began to work with broader brushstrokes to capture their flattened effects and abstracted backgrounds.

If Van Gogh wanted to contribute to modern art, he may have seen Japanese art as a way of doing this. His Japanese dream thrived with flowy peach blossom, a local foil to the Far Eastern cherry. Looking at Millet’s The Sower 1850, he set about modernising it with flat planes of colour and, in a man­ner adopted directly from Hir­oshige, sliced it diagonally across with a tree trunk. The close-ups was re-cast according to an Oriental model, using butterflies and flowers.

The prints planted the seeds of van Gogh’s Japanese dream. He ex­p­erimented with their stylistic devices: omitting the horizon or playing with abrupt compositional crops, trying forceful diagonals or exaggerating bird’s-eye views.

Two 2018 exhibitions examine Japon­is­me and van Gogh. In Tokyo’s Metropolitan Art Museum, the Van Gogh & Japan Exhibition (2018) showed how the enthusiastic assimil­at­ion of Japanese imagery encouraged bold experimentation for Van Gogh. This exhibit­ion then explored the two-way relationship between Van Gogh and Japan; it presented a lovely symmetry about Van Gogh be­ing ins­p­ired by, and in turn inspiring Japanese art in the 1920s and 30s. 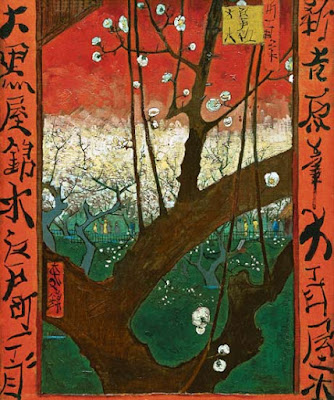 But the Van Gogh & Japan Exhibition in the van Gogh Museum Amsterdam (Mar-June 2018) is focusing more narr­ow­ly on the art­ist’s love of Japanese art, especially print making. Among the 60 paintings and drawings on display are special images such as L’Arlésienne; Irises; Orch­ard in Blossom; Self-Portrait as a Paint­er (1887) and The Bedroom (1888). The pieces that have been drawn from Van Gogh’s extensive collection are not terribly refined but there are some other great works of Japanese art eg Hok­us­ai­’s The Wave.

My most important question to ask in Amst­erdam would be: “was van Gogh’s work fundamentally altered, in response to Japan’s exotic, colourful images with their distinctive style?” The curators' answer is clear: once his enchanted world became his main artistic reference point, van Gogh assimilated the prints’ devices and positioned him­self as an artist in the Japanese tradition. He thus gained an avant-garde reputation.

The exhibition is accompanied by a scholarly publication collating 25 years of curatorial study; this catalogue assess­es the impact Japanese printmaking had on Van Gogh’s creative output. The book details the ways in which the artist constructed his und­er­standing of a Japanese aesthetic and his utopian ideal of a “primitive society”, and incorporated them into his own vision. The size, nature and importance of Van Gogh’s own coll­ection of Japan­ese prints are analysed, and lavish illus­trations of oil paintings and drawings by Van Gogh are included. 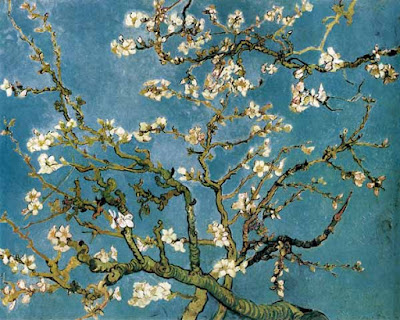 All images are from the van Gogh Museum in Amsterdam. Many thanks.

The latter two paintings really appeal to me. Ignorant me didn't even know about his Asian influenced works.

Hello Hels, Van Gogh absorbed lessons from his Japanese prints, but their influence on him was very personal and complemented his artistic genius. It is interesting that he acknowledged the 'diverting' influence of the Japanese prints, but his own work influenced by him seems more invigorating, and does not seem to miniaturize his world the way the ukiyo-e prints did theirs.

By the way, if you get to the Allen Art Museum at Oberlin College in Ohio, be sure to check out their major collection of Japanese prints, largely donated to them by an early collector, Mary Ainsworth.
--Jim

Good post. I must say that my Dutch parents admired Vincent before he went to Paris. His Dutch art reflected the people and landscape he understood best, farm houses or peasants planting in the fields or or a housewife preparing food. Lucas

I too assumed that most French artists of the era were interested in the Japanese cultural influence, to a greater or lesser extent. What I also did not realise was that van Gogh's vision of Japan was as a kind of Utopia, even though he had never visited the country.

Vincent was looking to create his own artistic genius, while Theo wanted his brother to a] survive his mental problems and b] successfully sell his paintings. For both brothers, Japanese prints seemed to do the trick. Although Vincent did not manage to sell his paintings before his early death, the art work in those last couple of years was lighter, brighter, more invigorated and more confident.

I wonder if the Japanese and Dutch exhibitions of "Van Gogh and Japan" cited Ohio's Allen Art Museum, Oberlin College. Or borrowed some of their Japanese prints.

I can absolutely understand your parents' view that an artist needed to be true to his own experiences of homeland, family, religion and culture. However artists change with time, and have new visions to draw upon. I remember when Chagall went back to Russia during WW1 and endlessly painted visions from his beloved homeland. But eventually he moved back to France again and moved on to new cultural experiences.

And there is another thing - lots of artists want to be at the forefront of the avant-garde. In van Gogh's case, he found modernity through both post-Impressionist techniques and Japanese cultural influences.

We have seen here a lesser known aspect of Van Gogh's art. It is very revealing as an unwitting historical record. The French particularly enjoyed Japanese culture. Even when I stayed in the apartment of a 'friend of a friend' in Paris in the 1970s, the place was full of coffee table books and prints with a Japanese theme. It still has not completely gone out of fashion, as I saw recently!
For me, The Sower reveals a beautiful balance between Van Gogh's own usual style and Japanese influence.
CLICK HERE for Bazza’s puckish Blog ‘To Discover Ice’

the influence of Japanese culture was seen all around Europe and America etc, but the French seemed to have absorbed it with more enthusiasm than other nationalities, as you saw yourself. Maybe it was because of the beautiful Japanese objects that were on display at the International Exhibition of 1867 happened to be in Paris. Or maybe because French artists like Jacques Joseph Tissot, Edgar Degas and Claude Monet was so keen.

As part of a loan exchange with the Van Gogh Museum in Amsterdam, The Harvard Art Museums will display van Gogh’s “Snow-Covered Field with a Harrow, after Millet” 1890 until early July. It depicts a stark, frosted landscape. In the foreground rests an abandoned plow and a harrow; a ruined tower stands in the distance. Van Gogh’s skill with the brush stirs a silent movement in the frame. In the painting’s upper left corner, a flock of birds, perhaps startled by an unseen passerby, rises to meet the sky, and the landscape’s sharp strokes make the ground “look like it’s undulating or moving on its own.”

Thank you. Have you had any feedback from visitors regarding “Snow-Covered Field with a Harrow, after Millet” 1890? Do people like it as much as they enjoyed the van Gogh paintings that were swapped with the Amsterdam Museum?