The Canton Museum of Art in Ohio began as the Little Civic Art Gal­lery above Canton's Carnegie Library in 1935. In time the gall­ery brought 3 works into its permanent collection, includ­ing their first watercolour, by Clyde Singer. Although the collection would grow in different ways in the coming decades, this selection antic­ipated the eventual collection focus of the Canton Museum of Art. In 1971, Ralph Wilson began donating works from his consider­able art collection to the museum. His first donation included water­colours by Charles Demuth, Lyonel Feininger, John Marin, Maurice Prendergast and Alfred Maurer.

Ralph Wilson continued to donate his own works to the museum until he died in 1979. By then, Wilson had donated 40+ quality works on paper by American artists, eventually becoming the heart of Cant­on’s coll­ection. Further growth of the Coll­ect­ion came with more fine watercolours by Andrew and Jamie Wyeth.

The central feature of the exhibition is the Museum's most recent acquisition: an 1890 Impres­s­ion­ist work Bleak House Broadstairs by the Am­er­ican artist, Childe Hassam (1859-1935). Major water-colours by Winslow Homer, Edward Hopper, George Luks, John Marin, Maurice Prendergast and John Singer Sargent are also feat­ured in this special exhibition, which is on view until April 2018. 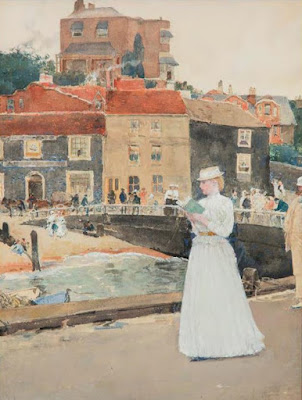 Frederick Childe Hassam (1859-1935) was born in Mass, descendent of a C17th English immigrant. Raised in a cultured home, Hassam decided early on to become an artist. He left high school to work for important Boston pub­lish­ers and began training as a wood-engraver and illustrator.

Early in his career, the artist dropped his Christian name Freder­ick. With his olive skin, the artist was thought by many to be Middle Eastern, a mistake he allowed to continue. In the mid-1880s, he started adding an Islamic-type crescent moon on his work.

In 1886 Hassam left for on a 3 year stay in Paris and enrolled at the Académie Jul­ian. Hassam saw a wide range of French and foreign styles but clearly it was Impressionism that really attracted this American. His 1887 Grand Prix Day demonstrates that after only a short time in Paris, he created a street scene that was Impressionist in its composition, broken brushstrokes and stronger colours.

Hassam eventually returned home with the technique and sensibil­it­ies of the French Impressionists, modified by American realism. Impres­s­ionism flourished in the 1880s in Boston without the furious protest it had aroused in France. So in 1898 Hassam felt free to join the artists Julian Alden Weir and John Henry Watchman in founding the Ten American Painters, which went on to in­clude Frank Weston Benson, Robert Reid and Edmund Tarbell etc. This group of Impressionists arranged popular exhibitions. 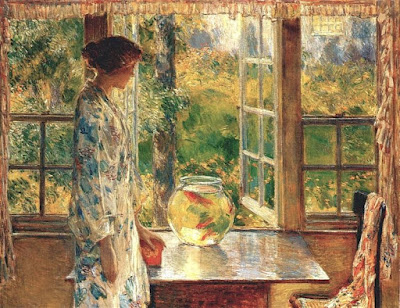 Hassam created 2,000+ oils, watercolours, pastels and drawings, thus achieving critical acclaim at home. While Hassam is well known for his lush gardens and boulevard scenes of Manhattan and Par­is, examine his Flag Series. These 30 paintings were created in support of the Allied efforts in WWI eg The Avenue in the Rain (1917), vibrant street scenes, filled with patriotic banners. 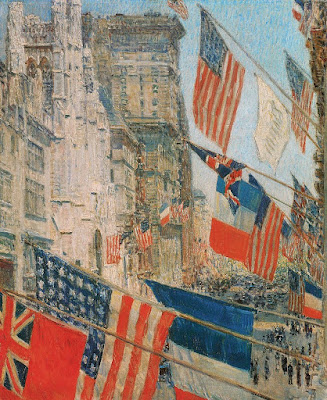 Together, the 7 artists featured in this "American Masters" exhibition contribute importantly to the nation's cultural heritage and the evolution of watercolour painting. Water colour is one of the most challeng­ing mediums for artists to use; the colours need to be carefully controlled or they bleed into one another. In the century following the Civil War, water-colour paint­ing became an important American medium, and it was used more freely than any­where else in the wor­ld. "American Masters" showcases creative ex­cellence in this special American medium.

Canton was a museum dedicated to American art, with a focus on wat­er­colours. So the museum’s collection needed a Hassam that would complement the American Masters collection. Bleak House Broadstairs 1890 was that painting! Clearly inspired by the French style in the late 1800s, the image of a graceful young woman reading a book in summer, and walking a waterway in coastal Kent, is still fresh. Remember that Broadstairs was the town where Charles Dickens often spent his summer holidays, writing David Copperfield inside that very house.

The provenance of this painting traces back via private collections to the painter himself; Bleak House was ex­hibited in 1906 at the Phil­adelphia Water Colour Club. Almost 120 years after being paint­ed, Bleak House is being exhibited until April 2018, with other prized works from the water-colour collection, including Winslow Homer, Edward Hopper and John Singer Sargent. 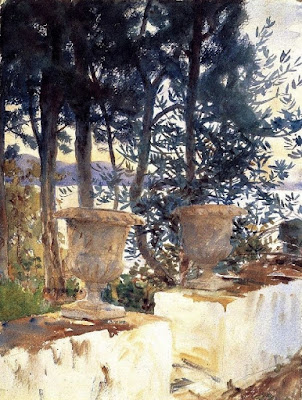 For many museums, watercolour paintings have been undervalued and therefore intentionally under-represented in their collections. But for Ohio’s Canton Museum of Art, C19th and early C20th American watercolours came to the represent the primary focus of the collection, as seen in this American Masters Exhib­it­ion. And this exhib­it­ion also has a second role: to show how Childe Hassam became America's favourite Impressionist.

Helen he must have used oil paints sometimes. The Bowl of Goldfish colours look rich and appealing.

Hello Hels, Watercolors do have a delicacy and vibrancy that is unique to that medium, and Hassam is obviously a master of the form. Canton was smart to make a collecting specialty in this medium.

I have been planning to revisit the Canton Art Museum, but unfortunately this exhibit is already over. My mother's family is from Canton, about an hour's drive from Cleveland, and we used to go there every week when I was growing up. The museum used to be housed in the wonderful old Case Mansion, and my mother never forgave them for moving out of (and then destroying) that magnificent building. Here is a link:
http://www.cantonrep.com/x1783187869/The-Monday-After-Case-Mansion-brightened-holidays

I am guessing that Homer, Hopper and Sargent were the major players in our lectures, because I don't remember Childe Hassam at all. But viva the women - Mary Cassatt and Lilla Cabot Perry were terrific.

I think we all feel that oil paintings are richer and more intense than watercolours, so why did Childe Hassam seem to choose to use watercolours often?

Apparently he thought that JMW Turner and others captured the moods and lights of landscape art best in watercolour. And he agreed that the best art comes when working directly from nature. So by applying softer, more diffuse colours to his work, he could create scenes full of light and Nature.

I am always impressed by romanesque architecture from the Edwardian era. Especially if it surrounded by a bit of land. But I do not understand how Case Mansion had been listed on the National Register of Historic Places, yet it was still pulled down!?!?

Have the locals been happier since all the arts in Canton were centralised in the Canton Museum of Art in 1970? Possibly not... once a beloved building has been destroyed, the arts world is never quite the same again.

I went back to my old notes to have a look and found I barely mentioned Childe Hassam at all *oops*. And you are correct about the women. I already knew every Cassatt painting off by heart, but I put a lot of work in "uncovering" Lilla Cabot Perry's work.

You have included some lovely pieces of art. I had not heard of Childe Hassam before.