My list of turn-of-the-century writers is especially long and constituted an import­ant part of Austrian literary history: Franz Werfel, Arthur Schnitzler, Hermann Bahr (play­wright and director), Stefan Zweig, Franz Kafka, Josef Roth (novelist journ­alist) and Felix Salten (plays, novels, travel books). Many of these writers arrived in Vienna from across the Empire but it wasn’t until they established themselves in the capital city that they achieved artistic peaks. In light of what I am going to say about Zweig, it might be ironic to note that these writers stood for a specific type of old Habsburg Empire liter­at­ure.

Stefan Zweig (1881–1942) was actually born in Vienna itself, son of Moritz Zweig (1845–1926), successful Jewish textile manufact­urer and Ida Brettauer (1854–1938), daughter of a Jewish banking family. Zweig studied philosophy at the University of Vienna and in 1904 earn­ed his doct­oral deg­ree. Religious practice was not important in Stefan’s life yet he never converted to Christianity and he often wrote on Jewish themes. And on the tragic destruction of European culture.

Zweig had a warm relationship with Theodor Herzl, the clever journ­alist/political activist who led the World Zionist Movement. Zweig and Herzl met when the latter was still the literary editor of Neue Freie Presse, then Vien­na's main newspaper. Herzl accepted some of Zweig's early essays for publication, even though Zweig bel­ieved in the unification of Europe and internationalism, and Herzl believed in Jewish nationalism and the creation of a Jewish state.

At the beginning of WWI, patriotic sentiment was widespread in the German-speaking countries, and extended to most German and Austrian Jews, including Zweig & philosopher Martin Buber. Zweig was a pacifist, so he did his national service in the Archives of the Ministry of War, and maintained his pacifist stand.

He became a prominent and prolific writer in the 1920s-30s, close to Arthur Schnitzler and Sigmund Freud. He was very popular in the Europe and Spanish speaking South America, but he was not well known in English speaking countries. True, some literary critics thought he was lightweight but oth­ers found his humanism and simplicity to be effective. 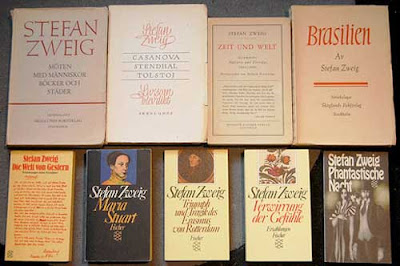 This was a time of growing national violence in Europe; Zweig was becoming very alarmed, and quite depressed. So he retreated to a safe area of writing that everyone would love: historical biographies eg Balzac (pub­lished in 1930),  Freud (1931), Queen Marie-Antoinette (1932),  Erasmus of Rotterdam (1934), Mary Queen of Scotland and the Isles (1935) etc. He could be a great exponent of the Jewish humanist and Viennese ideals, at the same time.

But the end was in sight. In 1933, following Hitler's rise to power in Germany, Joseph Goebbels organised book burnings in Berlin and other cities. All the brilliant books written by Einstein, Marx, Kafka, Freud, Schnitzler and of course Stefan Zweig were thrown onto bonfires; cosmopolitan modernism turned to ash in minutes.

In 1934 Zweig left Austria for Britain. Yet he managed to sustain a close working relationship with German composer Richard Strauss, and provided the libretto for their opera The Silent Woman. Strauss was very brave in defying the Nazi regime by refusing to remove Zweig's name from the programme for the opera’s première in 1935 in Dresden. Naturally Goeb­bels walked out in high dudgeon and the opera was banned after three performances. Zweig later collabor­ated with Strauss a second time, providing him with the libretto for one other opera, Daphne, in 1937.

Zweig divorced Friderike Maria in 1938 and married his Viennese secretary, Lotte Altmann, in London the very next year. But 1939 was not a happy year for European Jewry. In the aftermath of the invasion of Poland, Great Britain declared war on Germany. Zweig and the other German speaking intellectuals were immediately declared enemy aliens in the UK. Irony after irony!

Because of the swift advance of Nazi troops west-wards, Zweig and his new young wife travelled briefly to Yale University in the USA to save themselves. Then in  Aug 1940 they moved on to the Brasilian mountain town of Petropolis, near Rio de Janeiro. 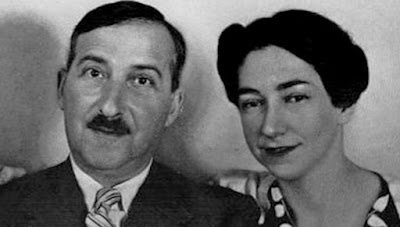 Alas life was tragic for the couple. Firstly Zweig had for many years been depressed at the collapse of European peace and culture, even before WW1. Secondly this great writer lost his German publisher, Insel Verlag, and thus his main source of fame and income. Thirdly exile to the cultural wilderness beyond European borders was intolerable. Finally Stefan heard from reliable sources that his second home/library in Salzburg had been dest­roy­ed by the Nazis. By February 1942 he was very depressed about the growth of brutal authoritarianism, and had no hope for the future.

Stefan wrote a farewell note in Feb 1942 and both Zweigs suicided in their Brasilian home.

If Zweig had used history to remind his readers that a better, more cultured life was possible, then his suicide was the most histor­ically significant event of them all. Just as well he had been a passion­ate collector of manuscripts. The British Library's Stefan Zweig Collection, donated by the family in 1986, focuses on auto­graphed music manuscripts, including works by Bach, Haydn, Wagner, Mahler. The most precious item is Mozart's own handwritten thematic catalogue of his works. And there is an important Zweig collection at the State University of New York. The last place to visit on a literary pilgrimage is the family home in Brasil, Casa Stefan Zweig, which has since been opened as a cultural centre.

The Impossible Exile: Stefan Zweig at the End of the World by George Prochnik was well reviewed in The Telegraph by Frances Wilson in 2014.

Hello Hels, What a sad curtailment of a brilliant career (how typical for the Nazi regime) that branched in several directions. I was interested in his visit to Yale; Wikipedia just said that he was the University's guest for two months. Was this just because of his fame as a writer, or was their any conscious effort to get talented people out of dangerous Germany?
--Jim

Richard Strauss was very brave. How many other people would risk their career like that?

Once again Hels, this is a name that I recognise but I could have told you little about him - until now! His is such a sad story; a gentle soul uprooted from his home to die in a tragic way overseas.
CLICK HERE for Bazza’s unlikely Blog ‘To Discover Ice’

Thank you for the history.

This is such a tragic story, In difficult time people make choices and the results can go either way...

I understand why Zweig would want to escape Central Europe in 1934, but I am not sure why he chose 1] Britain, 2] the USA and 3] Brasil. Because they were the only three countries that gave him a legal visa?

Just as well they did; once Zweig’s German books were burned and banned in Germany etc until the end of the Third Reich, his oeuvre only survived because of the translations in Britain and the USA etc.

Following the death of his regular librettist in 1929, Richard Strauss was looking for a new collaborator. Zweig seemed to be perfect, well-established and flexible. But Hitler came to power in January 1933, just as the opera was ready to be performed in public. It would have been banned, of course, but how could the Nazis burn the work of their hero Richard Strauss, Reichsmusikkammer president? Strauss was still very brave; he had no idea what would happen to The Silent Woman.

since he was a close friend of Herzl, I thought Zweig might have moved in 1934 to Israel where he would have been with thousands of German speaking landsmen. In the 1930s, the cafes of Tel Aviv were filled with German and Austrian writers, artists, musicians, educators, doctors etc. He would have still been a gentle soul uprooted from his home, but he would have replicated his earlier life writing, socialising and publishing.

But Zweig wrote he "never wanted Jews to become a nation again and thus lower itself to taking part with others in the rivalry of nations. I love the diaspora and affirm it as the meaning of Jewish idealism, as Jewry’s cosmopolitan human mission." The concept of being a normal, brutal nation with "cannons, flags, and medals" horrified him.

I read a couple of his historical biographies when I was at uni and thought he wrote very well. At least in English translation. But I didn't read any of his books that expressed his depression at the collapse of European peace and culture. It took until middle age to detect and sympathise with endless tragedy.

MMMHe certainly was a tragic figure but I cant help wonder at his possible encouragement of his young wife to die with him. It must have been a very bleak time for him and her as well. It is pretty amazing that he couldn't see that perhaps going to Israel would have been an option but I guess that is an indicator of how severe the grip of his depression must have been. I wonder what happened to his first wife and her children . Didi any of his family survive ?

Zweig had, to my mind, a very strange relationship with his first wife Friderike Maria. They lived in neighbouring houses in Salzburg so that he could concentrate of full time writing, while she could be his house keeper, reader, editor and translator. The children of her first husband were cared for by both Stefan and Friderike.

Friderike kept in contact with her second ex-husband, long after their divorce. Eventually she escaped Austria via France to America, thus protecting herself, her two daughters and their husbands. Thankfully.

In Lovesick, Zweig’s unknown woman sends a letter that will be delivered only in the event of her death. But why bother writing a letter you could not bear to send in the first place? Because a part of us wants to have done things differently, because a part of us doesn’t, because in remaining faithful to someone else we have acted without complete loyalty to ourselves, because we worry that our letters will not be read, in short because we are torn between desperately wishing to remember this tormented version of ourselves all the while hoping to rid ourselves of it altogether. Stefan Zweig will break your heart.

heartbreaker is the term that always comes to mind when thinking about Zweig. Thank you for your very sensitive article.