What happened to pacifists in WW1?

Pre-WW1 pacifism was the belief that violence was always immoral, even in self-defence. The belief might have been grounded in relig­ious commitment against the killing of human beings or in a secular belief that war could never replace peaceful negotiations as a means of solving disputes.


But the term Pacifist also described the moderates who believed that war could be abolished by improving international law and arbitrating disputes between states. These conscientious objectors/COs accepted that, until such abolition was achieved, military force could legitimately be used only to defend the nation’s own soil against foreign attack. Or perhaps for enforcing international obligations. 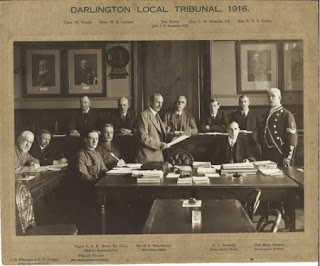 The Fellowship of Reconciliation/FoR was formed from a pact made in August 1914 at the outbreak of WW1 by two men at a Christian pacifist conference in southern Germany, an English Quaker and a German Lutheran. The FoR had a prominent role in acting as a network for Christian pacifists during the war and had a particularly strong membership among the Quakers.

The No-Conscription Fellowship/NCF was a British pacifist organis­ation which was founded in London in Nov 1914, after WW1 had failed to reach an early conclusion. The activities of the NCF clarified what was faced by those who refused to take up arms: from social ostracism to imprison­ment and even capital punishment.

There are three important books to read: Pacifism in Britain 1914-1945: The Defining of a Faith by Martin Ceadel (Oxford UP 1980), No More Soldiering: Con­scientious Objectors of the First World War by Stephen Wade (Amberley Publishing, 2016); Conscientious Objectors of the First World War: A Determined Resistance by Ann Kramer (Pen & Sword Books Ltd 2015).

How were COs shamed? A white feather was given by women to shame individual British men not in military uniform. But there was no way for the woman to know if the recipient was: on leave from the front, wounded, in a protected industry, too old, was the sole support of many child­ren or was indeed a pacifist. Even the Suffrage Movement was split over mandatory conscription.

It was not until Jan 1916 that the Military Service Act was enacted in Parliament, bringing in conscription after the large-scale loss of manpower in the major Western Front campaigns. The Act created a formal site of confrontation between the military estab­lish­ment and the pacifists and COs. Across Britain, young unmarried men who would not fight found themselves hauled before tribunals of elderly men, appointed to decide their fate. Then married men were also conscripted.

Martin Ceadel wrote that in Britain, the Military Service law had actually been quite liberal. In principle it exempt­ed those of any or no religious affiliation from fighting. Some pacifists were prepared to work in war zones as long as it was in non-combat roles eg medical orderlies, stretcher-bearers, ambulance drivers, cooks or labourers. Others were prepared to do alternative, non-combatant or civilian work of national importance at home eg farming, forestry or community service like The Red Cross. A small number refused to do anything that might help the war effort.

Clearly many Britons particularly disapproved of tolerance being shown by military-service tribunals that recognised sec­ular object­ions. As a result the tribunals were said to have hounded atheists and socialists, believing they were lazy, deg­enerate, ungrateful shirkers, seeking to benefit from the sacrifices of others.  [This was not true for every one. Lady Ottoline Morrell was already sharing the Bloomsburies' Fitzroy Square gatherings where she met the regulars. She was herself a pacifist, so during WW1 she found jobs on her Oxford estate so that COs from the Bloomsbury Group could gain exemption from serving in the army. Secondly she welcomed injured soldiers to her home, to support their pacifism and to get their literature published]. 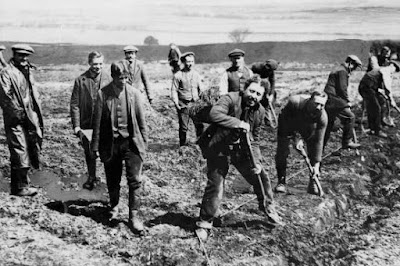 Imprisoned COs given manual labour in Dartmoor

There were 16,500 COs in 1916, most awarded some kind of moral acknowledgement by their tribunals. But because religious men who accepted the literal truth of the Bible wanted total exemption, they had a worse struggle. Only 985 British objectors held out against ANY type of alternative service, yet they attracted most public attention. Their prison sufferings were widely publicised.

c6,000 objectors were inducted into the army, though after a few weeks of harsh treat­ment they were usually handed over to the civil auth­orities. Despite the 34 cap­it­al punishment sentences, none carried out, most objectors compromised by under­taking non-military work of national import­ance under a new Home Office scheme. Did anyone see the bitter irony of handing out death sentences to men because they objected to killing men?

Stephen Wade described the traditional accounts of COs that painted them as at best cowards, and at worst traitors and collaborators. He focused on the history leading up to the introd­uction of the 1916 Act, and the forced conscription of civilians into the Brit­ish Army. He too described the 16,000 British men who refused cons­cription on grounds of conscience, and believed it wrong of any government to force them to kill.

At least 500 of the objectors were imp­risoned under brutal cond­it­ions, some spending long sentences locked up. Of course nothing that the authorities did broke the determined resistance of these men. Ann Kramer looked at who the men were, why they took their stand and how they were treated. To bring their voices and exper­iences to life, Kramer used contemporary interviews, memoirs and newspapers articles. She thus described what it was like for COs to face hostile tribunals, be forced into the army, defy army regulations, be brut­al­ised and endure repeated terms of imprisonment.

When discussing WWI now, attention is still focused on those soldiers who made the ultimate sacrifice: men who fought and died in the trenches so that future generations could live in a democracy. Yet the level of scorn aimed at those who made every attempt to avoid killing continues. Was it ever deserved? Ceadel, Wade and Kramer proved that those who refused to kill were also courage­ous.

Many of those who had called themselves COs before 1914 continued to regard themselves as COs after, despite participating in the war effort in some way. And not surprisingly pacifism became widespread as a reaction to the WW1 massacres and to universal male conscript­ion. My grandfather was a passionate supporter of the Russian Revolution in 1917, yet by 1930 was a total pacifist.

Two WW1 recruiting posters.
One tugged at the heart of the family man who loved his wife and children
and the second ridiculed the lazy man who did not enlist.

In WW2, there were 59,000 British COs who received better treatment than their fathers had done in WW1. Yet even pacifists had to carefully re-think their response to the Nazi Holocaust, American nuclear weapons dropped on Japanese civilians and other industrial scale massacres.

People Power: Fighting for Peace is an exhibition at the Imperial War Museum London until late August 2017. From conscientious objectors to peace camps and modern day marches, hear the stories of passionate people since 1914 on, and the struggles they endured for the anti-war cause.

Helen
Do you remember the fears that COs felt during the Vietnam War? We learned nothing from WW1 and so on.

Imagine trying to get conscription through the parliament now. Imagine trying to conscript today's young people. The would have one eye on their phone while they were shooting at the enemy. No smashed avocado on sourdough in the army.

Hello Hels, Robert Benchley (my favorite writer), whose beloved older brother was a casualty of the Spanish-American War, was a determined pacifist, a position he made clear through abundant satire in his essays.
--Jim

True pacifists would oppose killing, whichever countries are involved. But for the rest of us, I suppose we have to differentiate between the circumstances. In WW1 and WW2, the French, Belgians, British etc truly believed their nations would be overrun by the enemy, their houses destroyed and their families killed. Even most COs were prepared to do civilian work of national importance, instead of fighting.

But in Vietnam, I doubt if Australian men of army age even knew where that country was on the map. No-one here believed we would be invaded! So no wonder men feared conscription to a country they didn't know, to fight for a cause they didn't understand. Agreed.. we learned nothing :(

do you remember a few years ago when a Judicial Inquiry had to examine the ethics, effect and justice of conscription in the Australian Defence Forces? Mandatory Conscription was an abuse of power and of people, and steps were required to right the wrong that was committed. I wonder what happened to that Inquiry? If the findings were as awful as people expected, then you are correct... it could not happen again.

was Robert Benchley always a committed pacifist? Or did he become a pacifist when he saw the carnage of the Spanish-American War? It seems that many families who willingly sent off a beloved son or brother at the beginning of a war.. became much more considered in their pacifism when the young man was killed or severely wounded.

If it was my son or brother, I would be taking the army apart :(

Thanks for this Hels- it was really interesting. I hadn't heard of the enquiry you mentioned about the ADF. Do you know more about it? Wish I was in England to go to that exhibition!

"Defence Minister Stephen Smith announced a judicial inquiry into cases of abuse within the Australian Defence Force from the 1950s through to the present day. The single act of introducing conscription, by limited ballot, of young men into the Australian Army, in the years 1965-972, for military service overseas in a war zone, constitutes one of the graver acts of abuse and bullying of Australian citizens in recent history. The judicial inquiry should look at the ethics, effect, equity and justice of conscription. It was an abuse of power and of people, and redress and an apology are required to right the wrong that was committed."
The Combined Servicemen, March 2013
http://www.nscfaa.org.au/files/Combined-Servicemen-Mar-2013.pdf

Alas I couldn't find any findings and recommendations.

Hi Hel. Apparently 306 British and Commonwealth soldiers were shot in WWI for 'cowardice' or 'desertion'. So, even if they didn't manage to avoid conscription, they could end up dead. Of course this number is insignificant when compared with the hundreds of thousands who were pointlessly slaughtered on both sides through the incompetence of the generals.
CLICK HERE for Bazza’s unlikely Blog ‘To Discover Ice’

a nation certainly had the right to conscript 18 year old boys in the time of war, and to gaol them if they objected to fighting. But no nation had the right to put shell-shocked 18 year olds in No Man's Land so that soldiers from either trench would be certain to kill them. This was illegal, immoral and disgusting.

When my sons were 18, I was still telling them do their homework and tidy their rooms :(

many thanks. Do you have an interest in pacifism?

@Parnassus
Always tickled to happen upon another Benchley admirer. I trust you've been keeping up this past decade/decade and a half with the new material. Benchley's been my favorite humorist since the early 1970s, and I have to say that the new century has already yielded up more than the last thirty years of the Twentieth–good stuff too. Rather than reprints of previous collections. we've had many theater reviews, New Yorker columns, pieces for The Detroit Athletic Club and MUCH more—truly it's been a bonanza!
BTW, your mention of SOB's loss brought to mind (as does any mention of the Spanish–American war, McKinley, Teddy R &c) what Benchley overheard his horrid mother say, and, assuming his repeated references in later life are any indication, how deeply wounded by it was this young man already deeply mired in grief.
Greg R.

Isn't it interesting that a young man mired in grief often goes on to use humour or satire as a way of dealing with the misery. I suspect depression was the more common response.