Yad Vashem showed that the artist Felix Nussbaum (1904-44) was born in Osnabrueck, north of Dortmund. His father had been a very patriotic German citizen and ex-soldier.

Young Felix travelled with a small group of German students at the Berlin Academy of the Arts in Rome, after winning a prestigious scholarship. In April 1933, the German Minister of Propaganda Goebbels visited the artistic elite and lectured them on the Fuhrer’s artistic doctrine. Felix understood that there was no place for him, as a Jewish artist, within the con­fines of this doctrine. He left Rome by early May and his scholarship was soon revoked.

His older brother Justus and his family stayed in their home town to run the family’s thriving metal business but Felix’s parents left Osnabrueck. The senior Nussbaums spent the summer of 1934 with their son in Italy; his uplifted mood was seen in the colours of his works back then eg The Beach at Rapallo, 1934. His portraits were serious but rarely fatalistic eg Self-Portrait with Painter's Cloth, 1935


In 1935, his parents yearned to be in their beloved Germany and planned to return, despite the fierce objections of Felix. He met a gorgeous Polish-Jewish painter Felka Platek who had been studying under Ludwig Meidner. The young couple first went to Paris in January 1935, then to the Belgian resort town of Ostende and later they moved in with friends in Brussels. In October 1937, Felix and Felka were married.

Felix’s brother Justus and his family were forced to emigrate in 1937 when all Jewish businesses in Osnabrueck were Aryanised. They arrived in the Netherlands in July and together with several other German refugees, he managed to establish a scrap-metal company.

In the meantime, the situation in Germany was deteriorating rapidly. On Kristallnacht, the synagogue in Osnabrueck was burned, Jewish homes were looted, and all Jewish men from the town were taken to Dachau. In May 1939, Felix’s parents finally decided to leave Germany. They fled to Amsterdam to reunite with son Justus. In The Great Disaster 1939, Felix expressed the dramatic change that Hitler’s accession had wrought - the destruction of European civilisation. 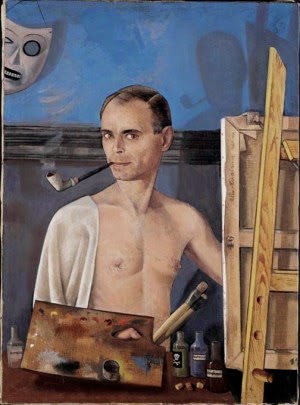 Felix Nussbaum
Self Portrait in Front of the Easel, c1942 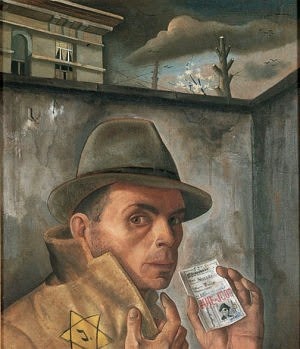 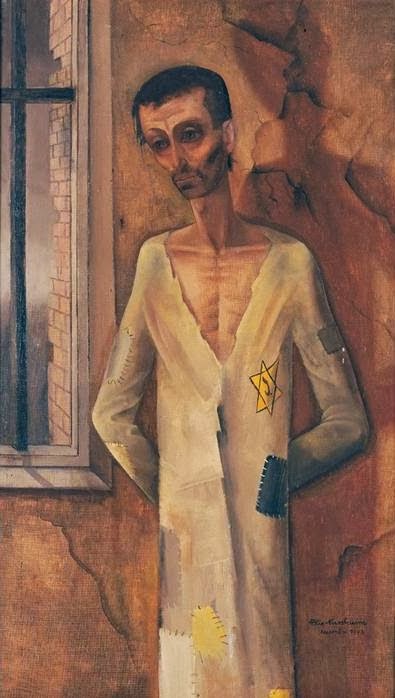 When Belgium and the Netherlands were occupied in May 1940, Felix was arrested in his flat and, like all other aliens, taken to a camp in southern France. His interment there was a personal watershed; then Felix understood the true extent of catastrophe facing each Jew under Nazi rule. He expressed this in an important work, The Camp Synagogue at St Cyprien 1941 – the first work showing Felix’s connection with his own people.

In August 1940, Felix applied to return to Germany. When he reached the checkpoint at Bordeaux, he boarded a passenger train to Brussels and reunited with his beloved wife. From 1940 on, Felix lived in hiding, on charity. His Belgian friends provided him with food, a studio and art supplies. Lacking residency papers and in continual danger of being discovered, Felix’s art focused on fear, persecution and the danger to his family. Even more important for the future, Felix hid his paintings with two Belgian friends in 1942.

The idea that Europe had become enemy territory was expressed in Nussbaum’s earlier work European Vision The Refugee, 1939. The Jewish refugee, holding his head in his hands, found no shelter or hope on the threatening globe, which stood on the table. The artist already knew his family would not survive the extermination camps.

How did Felix Nussbaum’s works survive the war? Augustes Moses-Nussbaum, Felix’s cousin, campaigned for the pictures that had re­mained in Brussels to be located and legally returned to the family. Then she bequeathed 100+ pictures to Felix’s birth city. American architect Daniel Libeskind designed a space to show the interrelation between architecture and Felix Nussbaum’s tragic life. By 1994, the City of Osnabrück had extended the Cultural History Museum to include the new Felix Nussbaum Haus. It consists of three intersecting volumes, rather roughly put together. 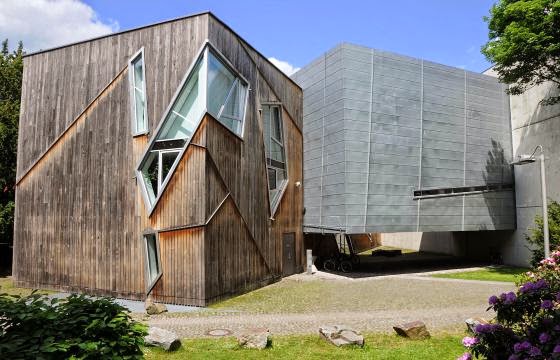 The collection has grown to over 180 exhibits since Augustes Moses-Nussbaum’s original bequest. I recommend people read Felix Nussbaum’s Catalogue Raisonne. And the Weimar blog. I saw the book Felix Nussbaum: Art Defamed, Art in Exile, Art in Resistance, 1997 (Overlook Press) on line, but I have not read it. Perhaps some kind reader can write a short book review for this post.

Herbert Leder, photographer at the Holocaust Museum in Melbourne, met Nussbaum in Brussels back in 1940. Leder recorded his memories of the artist decades later, noting that the artist had been a dark gaunt man living a lonely restricted life in his crowded two-room flat, empty easels and completed paintings stacked against the walls. The haunting paintings of that period clearly revealed the artist’s state of mind, feat­ur­ing gloomy subjects like a group of skeletons playing in jazz bands. Or gaunt Jewish figures standing at windows, staring out of dismal surroundings.

Are there any galleries, more covenient than Osnabrueck, that have holdings of Nussbaum art.

start looking in the Neue Galerie Museum for German and Austrian Art in New York, as well as Yad Vashem in Jerusalem. I will add a list of his recent travelling exhibitions to the post, so that you can search their catalogues.

Osnabrück does indeed have the vast majority of his oeuvre.

It was amazing that Felix Nussbaum could work at all in these horrific conditions. So sad that he was talented enough to win the scholarship to study in Italy but then could not develop his own style under the political regime of the day. This was the case for so many talented artists all over Europe during the war years.

Nussbaum does manage to capture the very essence of the individual in relation to the hostile environment in which they find themselves. The figures positively reach out from the canvas and draw the viewer into their world of fear and torture.

I had thought that Felix and his parents were not moving fast enough; that either depression or fear was stopping them from getting out of the killing fields much earlier.

But now I think you are right. His art accurately captured the very essence of the individual in relation to his hostile environment. It wasn't depression he was describing in those elongated El Greco-like figures; it was bodily and spiritual pain.

Nussbaum’s school days coincided with the stresses of the First World War. His school record showed that he had great difficulties with his studies and was self conscious about his diminutive stature. His inner insecurity was reflected in the dark mood and morbid scenes portrayed in a whole series of paintings around 1930.

oh my goodness...
a very unhappy childhood
and a painful, short adulthood :(
Why didn't the rest of his family try to save Felix?

Thank you so much for your blog . I love it and am very grateful for the effort you put into your research . It is wonderful to transported away from my parochial concerns to another time and place . Mem in Brunswick

that is so true! But I don't think it is just individuals who get sucked into fairly local and trivial stuff every day. It took until 1994 before the City of Osnabrück extended the Cultural History Museum to include the new Felix Nussbaum Haus. Had the city forgotten one of its most famous sons?