Australia in the Great War is the Memorial’s new permanent exhibition on display in the First World War Galleries; these new galleries will be officially launched on 22nd February 2015. The timing is perfect. During 2014, the world marked 100 years since the start of the war in Europe. On 4th August 1914, Britain declared war on Germany; on 10th August 1914, volunteer recruiting began in Australia. And on 25th April 1915, British, Australian, New Zealand and French troops made their pre-dawn landing on the Gallipoli peninsula via small ships. 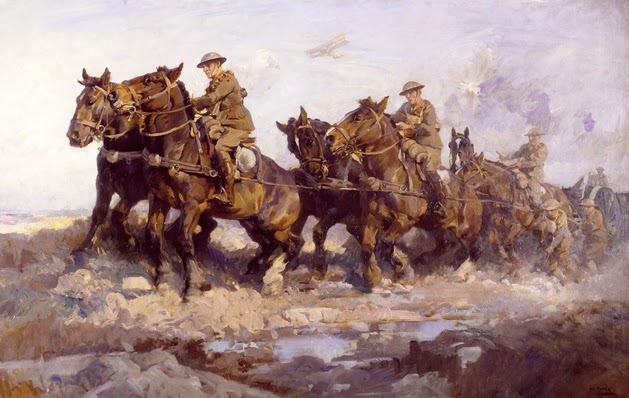 The exhibition presents the story of Australia in the First World War chronologically, covering all major theatres of operations - the Western Front, Gallipoli, Egypt, Palestine and the war at sea. The events taking place on the home front and the immediate and enduring legacy of the war are also included. Visitors will be able to examine and integrate a wide variety of items from this enormous collection, including dioramas, paintings, photographs, film, letters, diaries, uniforms, medals and weapons. 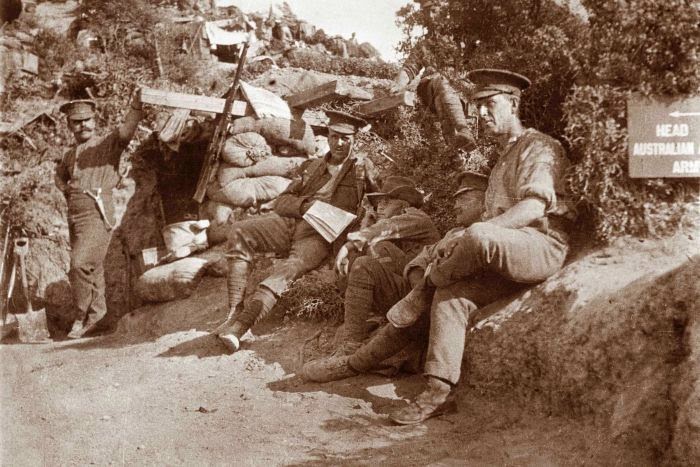 Photo of five soldiers sitting on the road up to Plugge’s Plateau.
Australian War Memorial, Canberra


Ten Australian artists, who happened to be living in Britain bef­ore WW1 broke out, were commissioned as officers and asked to create drawings and paintings in European war zones. This scheme was admin­istered by the Australian High Commission in London, with official war correspondent Charles Bean as adviser. The ten artists appeared in a group portrait by George Coates (see below).

Examine 2 of those ten artists. Septimus Power (1877–1951) was appointed an official war artist in 1917 and attached to the 1st Division Australian Imperial Force in France. Bringing Up The Guns was a large painting that was completed in 1921. Power depicted a team of six horses struggling through the mud, pulling the gun carriage with a heavy gun. The horses and soldiers were from the 1st Australian Imperial Force, 101st Australian Battery, and were taking part in the Battle of Ypres in Passchendaele in July 1917. The battlefield had become churned by the unceasing bombard­ments.

Power was commissioned for a second time in August 1918 where he was asked to do large paintings depicting the Australian Light Horse campaigns in Palestine. 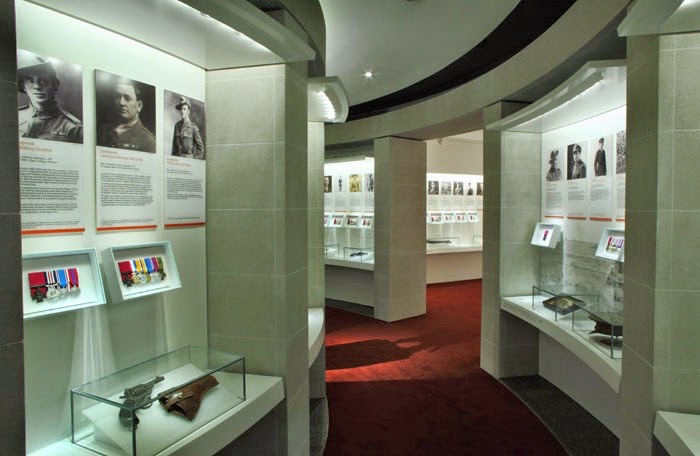 The Hall of Valour honours all Australians who received the Victoria Cross
Australian War Memorial, Canberra


Another artist was George Washington Lambert (1873-1930). In 1917, he was approached by both the Canadian and Australian governments to work as an official war artist. The Australian High Commission in London wanted him to go to Palestine so, attached as an honorary lieutenant to the Australian Imperial Force (AIF) who were then fighting the Turks, he left London in December for the Middle East. During the train crossing through France and Italy, Lambert made sketches of the passing landscape through the window. These were the first of dozens of drawings produced during 1918, many of them portraits of the officers and men who were based in Egypt and Palestine. I have published some of his completed war paintings in an earlier post. 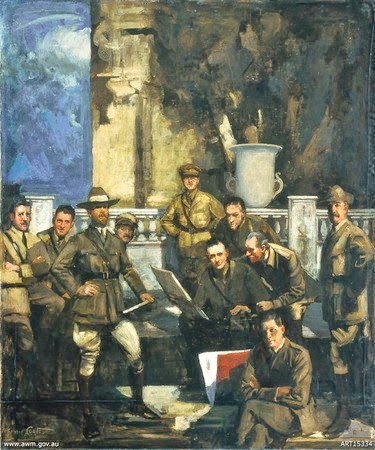 This looks to be a wonderful memorial and well worth a visit if one is in the area.

War artists and photographers hold a fascination for us. Indeed, a Hungarian friend who lived for many years in America was a war photographer for the Vietnam War. The images captured were a strange mixture and so very haunting. These artists capture so much more than just the events.

May I suggest to anyone visiting our national war memorial, pace yourself by visiting twice. As fascinating as the exhibits within the memorial are, you can quickly become overloaded.

Good grief. Arthur Streeton was one of the 10 official war artists.

Hello Hels, It seems that every town green has its collection of war memorials that repay a close look and a moment of reflection. Often the list of names is very long for such a small place, and one realizes the sacrifices that were made.

When I went to college, the Commons building (1901) had the names of WWI battles--Ypres, Château Thierry, Argonne, and so forth, later inscribed on the frieze, giving a solemn effect. Again, the list of inscribed names in the adjacent Memorial Rotunda seemed endless.
--Jim

yes indeed. If visitors had expected home-made sketches and photos by soldiers during their quiet time in the trenches, they would have been surprised by the professional artists and photographers.

I note that it wasn't until 1917 that the first professional artist (Will Dyson) was allowed to accompany the soldiers into European war zones. The worst years of the war, 1914, 1915 and 1916, were painted from soldiers' memories.

agreed. For all indoor galleries and museums!

I am finding in middle age that my eyes start to glaze over after a certain time. So two hours inside, examining exhibits, followed by half an hour in a white wine bar in the sunshine, works well for me. The mind is then refreshed for the second session in the afternoon, if required.

Once Streeton was made an Australian Official War artist, he went over to France in May 1918 and worked on war zone landscapes until October 1918. Have a look at "Amiens, the key to the west", for example.

His original drawings were taken back to Britain in 1919, to be completed as paintings after the war.

families were not allowed to have the bodies of their loved ones repatriated, so there were no graves to be visited. It was urgent, I suspect, that families and friends could have a place to pay their respects.. at home.

So I am always delighted when shrines and monuments went up in public spaces, but also friezes and rotundas as you noted in local universities, railway stations, hospitals, small churches etc.

Such an awful necessity, memorials.
To think of the many individuals who had no concept of 'individual' but of King and Country; of doing one's bit for the greater good. Completely removed from today's cult of the self-obsessed individual. No doubt coach loads of students will be forced to visit their national shrines and museums. Let us hope that it dawns on them the great love and sacrifice of those who have gone before, to whom we are all unkown, but who still gave their lives.

I agree with every word you said, especially that coach loads of students will visit their national shrines and museums. But I disagree with the words "they _gave_ their lives". Even after all this time, it still breaks my heart to think of beautiful 18-22 year olds, at the peak of their young lives, living squalid lives in trenches or facing machine guns on Gallipoli.

What a terrible waste of lovely young men... and for what? Nothing good came out of the War To End All Wars. 20 years later their sons were back facing machine guns again :(

Artists Of The Great War (at the National Gallery of Australia in Canberra) showed the terrific Coates painting. The booklet named the ten artists who were officially appointed by the Australian High Commission in May 1917. Each received an honorary commission in the AIF and wages of one pound per day. But it was a disparate and occasionally fractious group; Streeton was initially furious at the appointment of the younger artists, describing them as shirkers.

And there were other Australian war artists in the exhibition, not included in the Coates painting eg Iso Rae and Rupert Bunny.