After the Orient Express had already started oper­at­ions, the Compagnie Internationale des Wagons-Lits created its second luxury train. In order to serve wealthy, sun-deprived British customers, Calais-Méditerranée Espress was introduced in 1886. We can tell it was designed to focus on the British trade because a] the train’s time table for leaving Calais for the south was dependent on the arrival of the Dover-Calais ferry and b] the height of the season for the Calais-Méditerranée Espress came in Britain's cold and rainy months: Nov-April.

The route from Calais to the Mediterranean Sea was not direct. From Gare Maritime in Calais, the train travelled to Paris, stopping first at the Gare du Nord and then to the Gare de Lyon, where it picked up additional passengers and coaches. It departed Paris early in the evening, and made stops at Dijon, Châlons and Lyon, before reaching Marseilles early the next morning. It continued to the gorgeous holiday cities of the French Riviera, Cannes, Nice and Monte-Carlo, before ending the trip at the Italian border.

This so-called Blue Train had dark blue sleeping cars, a dining car, saloon car and a luggage wagon. And to cater to the needs of the in­ternat­ional railroad traveller on the ground, the Compagnie Intern­ational des Grand Hotels was founded in 1894, running a chain of luxury hotels in major cities eg Hotel Terminus in Bordeaux and Marseille. Life was good for the moneyed classes.

By the time Paris was preparing to host the Universal Exhibition of 1900, the city needed something bigger, better and more expensive than any other city had ever displayed. There was a major town-planning project which gave Paris the incomparable Grand Palais, the Petit Palais and the Alexander III Bridge.


Then Paris' Gare de Lyon railway station was remodelled to resemble a palace; the architect Marius Toudoire built the huge belfry/clock tower and the stunning façade of the station. In particular the Management of the railway company wanted to build a prestigious buffet, a symbol of travel, comfort, luxury and scientific progress. So in the station’s hall, a belle-epoque eatery called Buffet de la Gare de Lyon was unveiled in 1901 by the President of the French Republic, Emile Loubet. 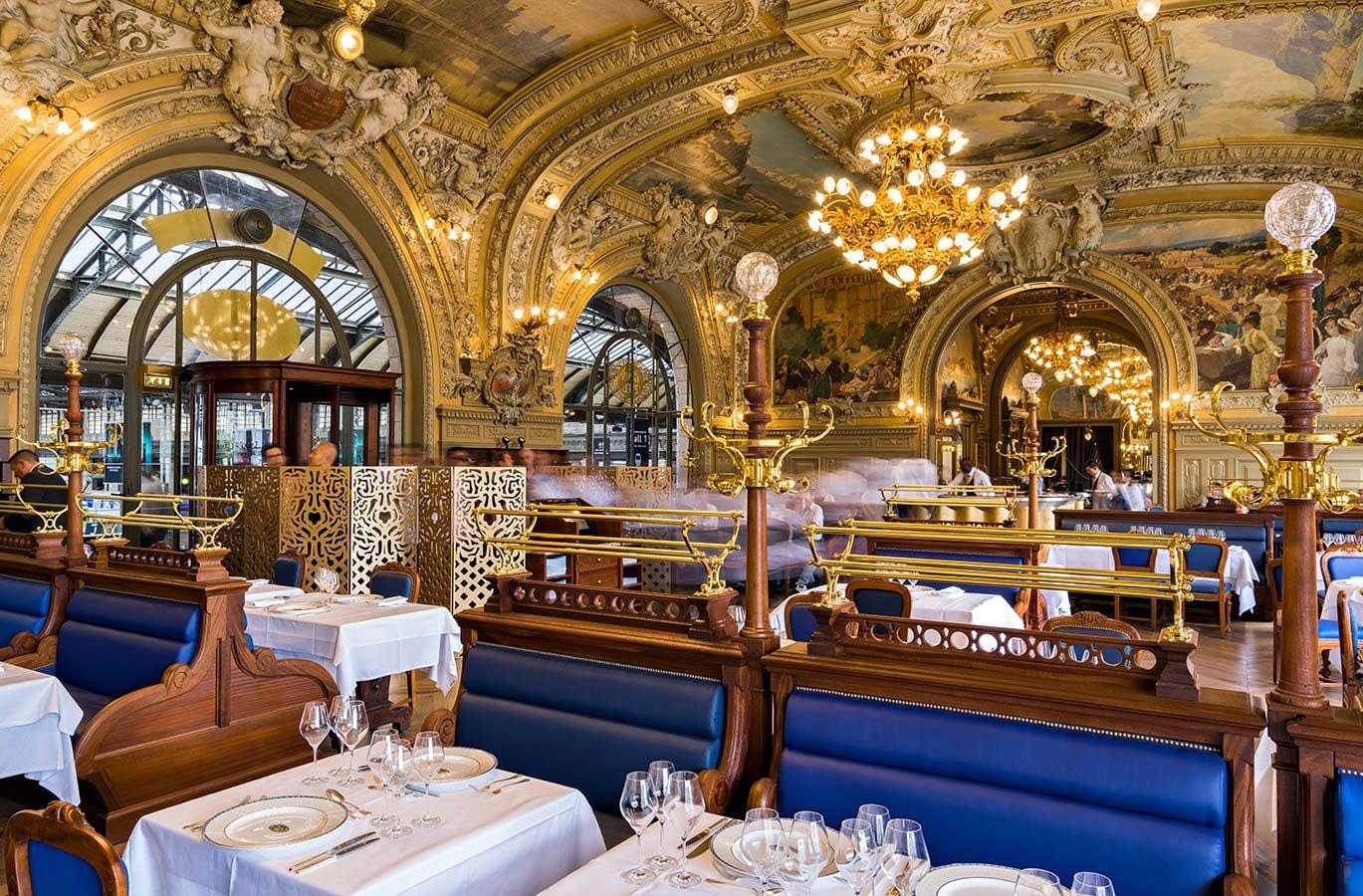 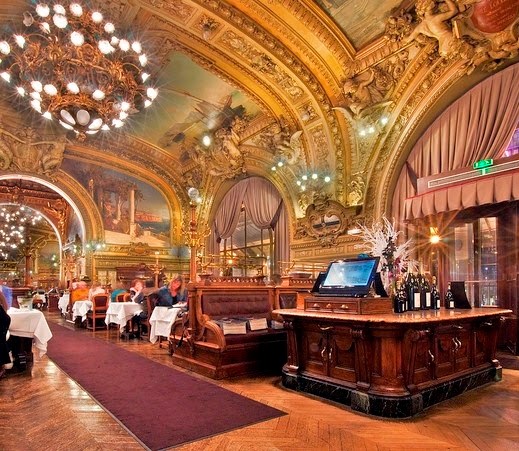 The paintings are beautiful

The restaurant has served drinks and meals to travellers and other guests ever since. It must still be popular: c500 diners are served every day at the station restaurant (now called Le Train Bleu).

But nothing prepares the visitor for the paintings. The PLM company hired the best known painters of the era to decorate the restaurant. Ceilings and walls displayed paintings representing the key towns and landscapes seen by the train traveller between Paris, Lyon and Marseille. Paris was represented by the Billotte tableau above the stair­way leading down to the station platforms; it showed the Alex­ander III Bridge and the Palaces that housed the Exhibition in 1900. Burnant painted the Mont Blanc and the Panorama of the Bernese Alps - PLM was of course the network of the Alps. Flameng, Debuffe and Saint-Pierre painted the three ceilings of Le Train Bleu, depict­ing Paris, Lyon and Marseille respective­ly. Monten­ard painted the cities of Villefranche and Monaco on the walls. 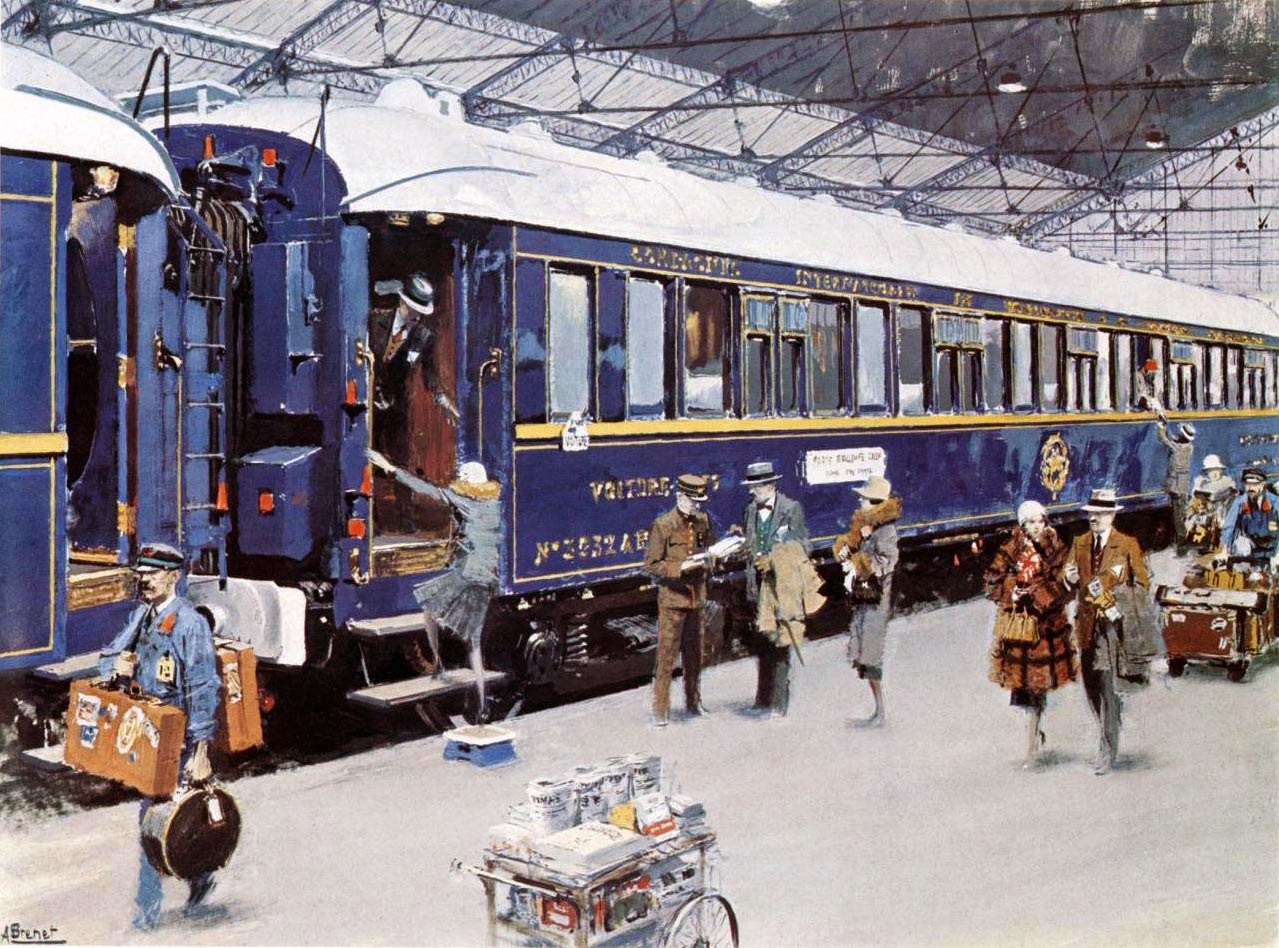 Only after WW2 was the restaurant formally re-named Le Train Bleu, after the famous train of the same name. But there were two more inter-war references we need to note. Firstly the modern ballet called Le Train Bleu, that was put on by Serge Diaghilev and the Ballets Russes for the first time in 1924, had been so popular. And secondly no-one could forget the famous novel The Mystery of the Blue Train (1928) by Agatha Christie. Appropriately the restaurant was classified as a Historical Monument in 1972.

For excellent photos of the interior settings and plates of food, see the blog Jessica Says. 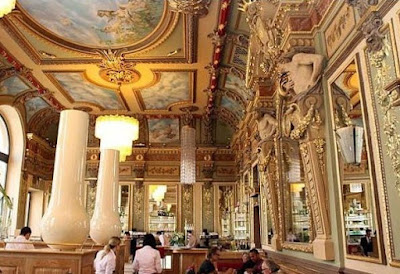 You know my money situation, Helen. I assume I couldn't even afford a cup of tea at this lovely restaurant.

Hello Hels, This is a truly fabulous space. One almost needs sunglasses to look at it (insert puns about 'gare-ish' here). Seriously, they can be proud of the immaculate care taken of this building. Too often buildings like this are allowed to disappear rather than face such elaborate and expensive restorations.
--Jim

prices at Le Train Bleu range from the insanely expensive right down to the mildly heart stopping eg The Menu Réjane, a sumptuous prix-fixe meal and wine is only €55 per person; Sunday brunch is only €40.

the great thing about a facility newly built for a World Fair is that the city throws endless money into making that facility truly memorable. The terrible thing about World Fair facilities is that they normally have to be torn down within a few years of the World Fair finishing.

What a miracle that both the Eiffel Tower and Le Train Bleu restaurant were saved! And then again in the 1970s when this restaurant faced closure again !! Good grief :(

It's a stunning restaurant but I doubt I would feel very comfortable there. Not just for my lack of formal attire, but it does not look like a comfortable place to eat. Perhaps I am only saying that because I could not afford to eat there.

Money aside, I used to think like that too. Until I saw Paris' loveliest citizens bring their small dogs into restaurants and eat with them on their laps. And there are plenty of photos of Le Train Bleu customers with babies and small children lounging around.

Thanks for the link to my article! Le Train Bleu was such an amazing experience: the décor and service were out of this world, the food (as you'll have gleaned from my article) was superb (exquisite French cuisine, elevated to new and interesting heights) and I couldn't have been happier about my time there. I didn't pay for the meal so I'm afraid I can't comment on the price, but from my experience, places like this tend to be on the expensive side - I wouldn't have been surprised if we paid arounnd €150-€200 or more per head with wine (but we DID drink a lot of wine). I hope this helps!

Thank you. When my husband and I first married, we lived away for five years. In dire poverty, but with a plan to see every gorgeous thing in the world before returning home to mortgage and school duties. I would count Le Train Bleu as one of those gorgeous things.

If you think Le Train Bleu was beautiful, you will love Le Bibent brasserie in Place du Capitole in Toulouse. Our guide said its Belle Epoque interior dated from the 1870s. Since it was declared a National Monument, someone has thrown money at the restaurant. The sculptures, frescoes and mirrors are gorgeous and over the top.

I am not familiar with Le Bibent brasserie, but I will try to find a photo and add it to the post. Many thanks.