My students are always fascinated by the Golden Age of Spanish art and architecture; there was a powerful religious element that grew in importance with the Counter-Reformation and soon spread to territories conquered by Spain in the New World. Even though the Spanish Missions came to the USA after Spain’s Golden Age ended, my blog is full of posts about their role in architecture, religion, communications, defence, employment and training. The question the students and I have not asked ourselves is what culture(s) was Spanish colonial culture replacing? In Sante Fe, at least, we find some of the answer.

Before WW1, the American Southwest was undergoing great change. Travellers from inside the USA and from outside the count­ry were drawn to the area and its vibrant Native American cultures, mobilised by the railways that were now servicing the West and the South. In the years after WW1 ended, European and American writers and artists believed Sante Fe in particular was very special – DH Lawrence planned a community there; Georgia O’Keeffe painted the landscape over and over again; art photographer Ansel Adams made many trips; and patron of the arts Mabel Dodge actually moved to Sante Fe. 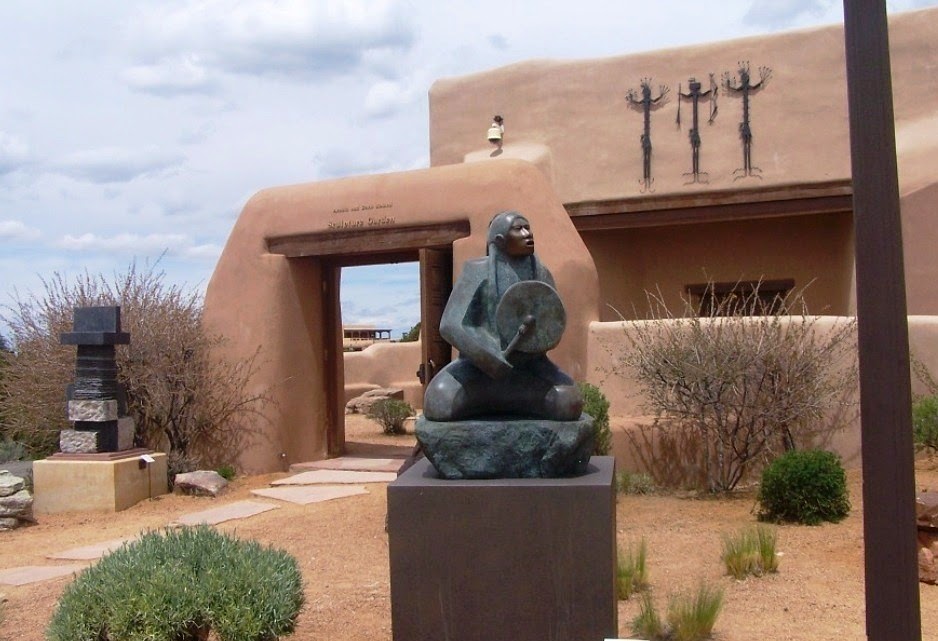 Right from the earliest part of the new century, anthrop­ologist Edgar Lee Hewett founded the Museum of New Mexico (1909). His goal was to collect and preserve South-western Native American material culture, given that museums in the NE corner of the country did not seem overly committed to the task.

In a completely separate move, John D Rockefeller founded the Lab­or­atory of Anthrop­ology (1927), to study the Southwest's indigenous cultures.

Only in 1947 did the two instit­utions merge, coordinating and curating a complex collection of New Mexican and Southwestern anthropol­ogical artefacts.

What was needed next was expanded space for exhibitions. In 1977, the New Mexico legislature searched for a design for a new, more profess­ional space, erected with adobe architecture. The Museum of Indian Arts & Culture finally opened in 1987 with a collection that concentrated on Southwestern textiles, pottery, baskets, jewellery, contemporary art, and artefacts chron­icling the everyday life of New Mexico's long period of civilisation.

In the following years, planning began for an additional wing. In 1997 a major permanent exhibition called Here, Now & Always, was developed by a curatorial team composed of Southwest Indians and museum professionals. Here, Now & Always tells the true stories of Native American commun­ities in the Southwest, using objects drawn from the Museum's collections. 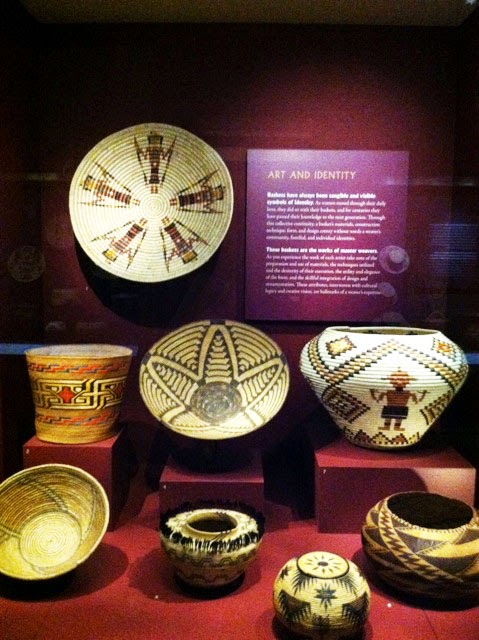 one display cabinet in the Museum of Indian Arts & Culture,

Sante Fe is not the biggest city in the world, having a population of some 145,000 people. But it does museology well. Museum Hill in Santa Fe is a very accessible group of four city mus­eums that have fine coll­ections of Native American art and arte­facts. The Museum of Ind­ian Arts & Culture is close to the Wheel­wright Museum of the American Indian, the Museum of International Folk Art and my personal favourite, The Museum of Spanish Colonial Art.

The Museum of Spanish Colonial Art, founded in 1925, is the only museum in the country dedicated to the art of the Spanish colonial period including southern Colorado and Hispanic New Mexico.  It is big enough to display the collection of 3700+ colonial objects and works of art. The museum's Spanish Colonial architecture, a Pueblo Revival building, was designed by architect John Gaw Meem in 1930. The style was inspired by a mixture of Spanish Colonial, mission, and Indian Pueblo architectural forms, perfect historically and suitable for the climate. 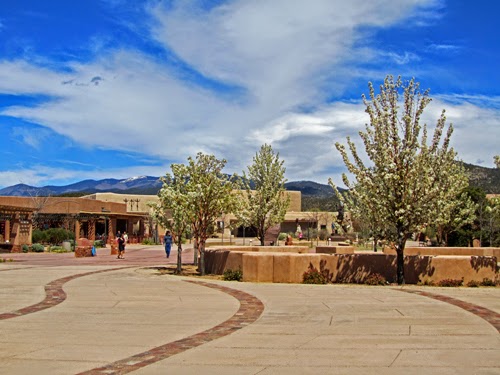 I wonder what attracted to DH Lawrence to Santa Fe in the first place. Do we know what happened to his planned community?

Joe
According to the Santa Fe Reporter, Lawrence and Frieda first visited northern New Mexico at the invitation of Mabel Dodge Luhan, a New York arts matron who lived in Taos.

Lawrence and Frieda lived in a rustic, three-room log cabin. It was built from ponderosa pine and adobe bricks in the late 1800s; its simply decorated interior was heated by a fireplace and had a dirt floor.

Lawrence spent only a total of 11 months on the ranch, between 1923 and 1925, but he wrote “New Mexico was the greatest experience from the outside world that I ever had. It certainly changed me forever.”

In 1924, Lawrence tried to convince some of his English friends to return to New Mexico with him in order to create a utopian society he called Rananim, but only the deaf artist Dorothy Brett made the journey.

Hello Hels, In the U.S., Southwest style or Santa Fe style is not just an artistic heritage or tradition--at times it amounts to an entire industry. The style is often encountered even in far-off Ohio, presumably after people go to New Mexico for vacations and come back loaded with Art. If fact, humorist Bob Smith said that the ultimate Santa Fe artifact would be the skull of Georgia O'Keeffe.

Incidentally, I did not know of Clevelander John D. Rockefeller's early support of the Laboratory of Anthropology, and found this interesting considering his very extensive backing of Colonial history and culture via Colonial Williamsburg.
--Jim

How does one make adobe architecture? And who created it in the first place?

that is why I need insider-knowledge on all posts other than those dealing with Australian and British topics. I rely on you and a few others :)

When you say Santa Fe style at times amounts to an entire industry, I presume you are talking about only the last 40 years or so. On my first trip to the USA in 1975 I could easily examine Spanish colonial culture. But I wasn't aware of Native American culture at all. (Admittedly I wasn't looking for it back then).

adobe is a building material ..where the bricks are made from compacted earth and straw, but the bricks are NOT baked. This gives adobe construction two great advantages: a] it is cheap and b] there is very little damage to the environment. But it is easily damaged, so to weatherproof the unbaked bricks, a render must often be layered on eg limed-based cement.

Adobe has always been used by indigenous peoples of the Southwestern USA, but it was popular in other cultures as well.