The Romans destroyed the Jewish state in 70 AD, razed the Temple and sent the government into exile.

In May 1948 prime minister David Ben-Gurion proclaimed the re-establishment of the Jewish state in Tel Aviv.

In the interim 1,878 years, Jews prayed three times a day for the re-establishment of the state and tried to survive the anti-Semitic nature of life in exile.

The modern Zionism movement changed from purely religious.. to religious and political. In 1896, Austrian journalist Theodor Herzl published an important political pamphlet called The Jewish State, which argued that the establishment of a Jewish state was the only way of protecting Jews in exile. Herzl convened the first Zion­ist Congress in Basel (in neutral Switzerland) in 1897. Ottoman-controlled Palestine, the old Jewish homeland, was the natural location where a re-established Jewish state would want to be. Alas for Herzl and the millions of Jews in central and Eastern Europe, they petitioned the Ottoman government for a charter without success.

After the pogroms in Russia at the turn of the century, tens of thousands of Russian Jews began to immigrate to Palestine, speaking Hebrew as the national language and Yiddish/Russian at home. With the collapse of the Ottoman Empire during WWI, Britain took over Palestine, issuing the 1917 Balfour Declaration about establishing a Jewish home-land in Palestine. This was authorised by the League of Nations in 1922. Britain, unable to find a practical solution to the hostility between Arabs and Jews, referred the problem to the United Nations, which in November 1947 voted to partition Palestine.

Nathan Jeffay, Australian Jewish News (2/5/2014), was very helpful. At 4 PM on the 14th May 1948, in the presence of the leaders of the coun­t­ry, David Ben-Gurion proclaimed the new state. After the Declaration was signed, the entire Jewish world sang the Hatikvah. The words of the national anthem could not have been more apt: “Then our 2000 year old hope will not be lost. To be a free people in our land”.

On the same remarkable day, the British mandate in Palestine offic­ially ended at midnight and David Ben-Gurion became Israel's first prime minister. Despite the British army withdrawal, a blackout in Tel Aviv and an imminent Arab invas­ion, Jews joyously celebrated the birth of their new nation. Egypt launched an air assault against Israel that evening. The next day, forces from Egypt, Transjordan, Syria, Lebanon and Iraq invaded. 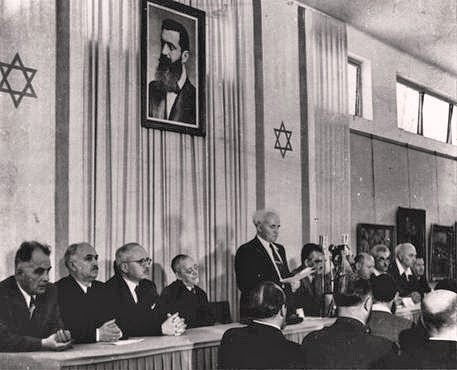 David Ben Gurion stood underneath the photo of Theodor Herzl
in Dizengoff House, Tel Aviv
and declared the establishment of the Jewish state
14th May 1948 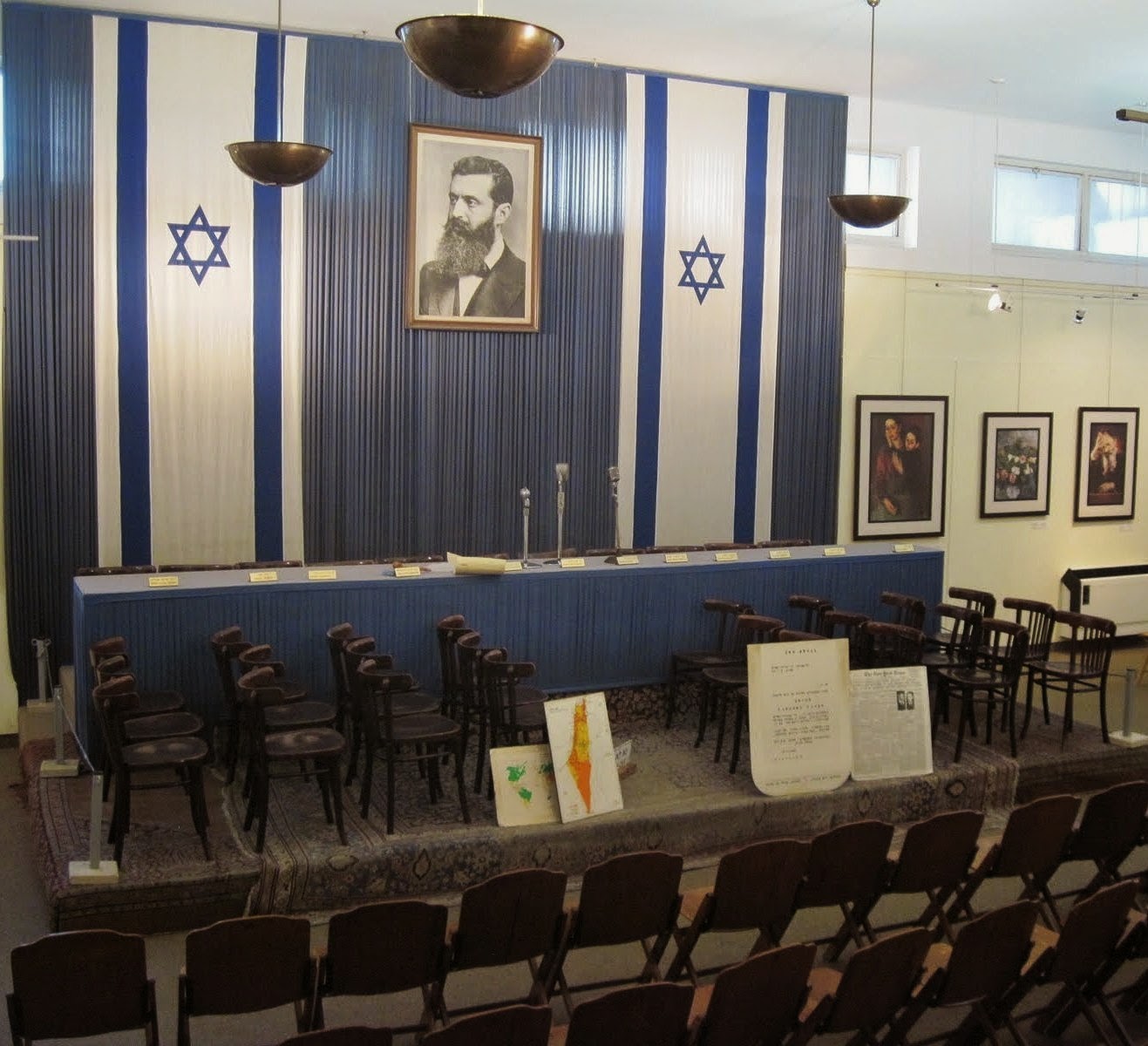 Meir Dizengoff and his wife Zina had received a plot of land in the sand dunes in 1909, before Tel Aviv was established. It was here he built his first small house and it was here he went on to become Tel Aviv’s first mayor. Dizengoff House, which was located in Rothschild Bld, gained a second storey according to the design of architect David Hershkovich. and looked like the rest of the Bauhaus-inspired city. This home provided the site for the signing of Israel's Declaration of Independence!

In 1930, after the death of his wife, Dizengoff donated his beloved house to the city and requested that it be turned into a museum. From 1932-1971 the house was used by the Tel Aviv Museum of Art, with Dizengoff still living inside until his death in 1933. Most of the pictures that were part of the Tel-Aviv Museum’s collection have remained on the walls, among them the works some of my favourite artists - Ury Lesser, Marc Chagall and Boris Schatz.

Then in the 1970s Dizengoff House became Independence Hall, a museum celebrating the achieving of statehood. Nathan Jeffay recommends visitors look at the huge portrait of Theodor Herzl flanked by two Israeli flags, documents, invitations, recording equip­ment and memos. The names of the important public figures who attended the ceremony are still recorded on the dignitaries’ stage and on the chairs. 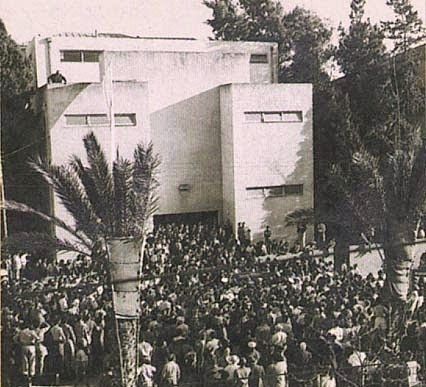 Dizengoff House, now Independence Hall in Tel Aviv.
Crowds waiting to hear the news in May 1948. 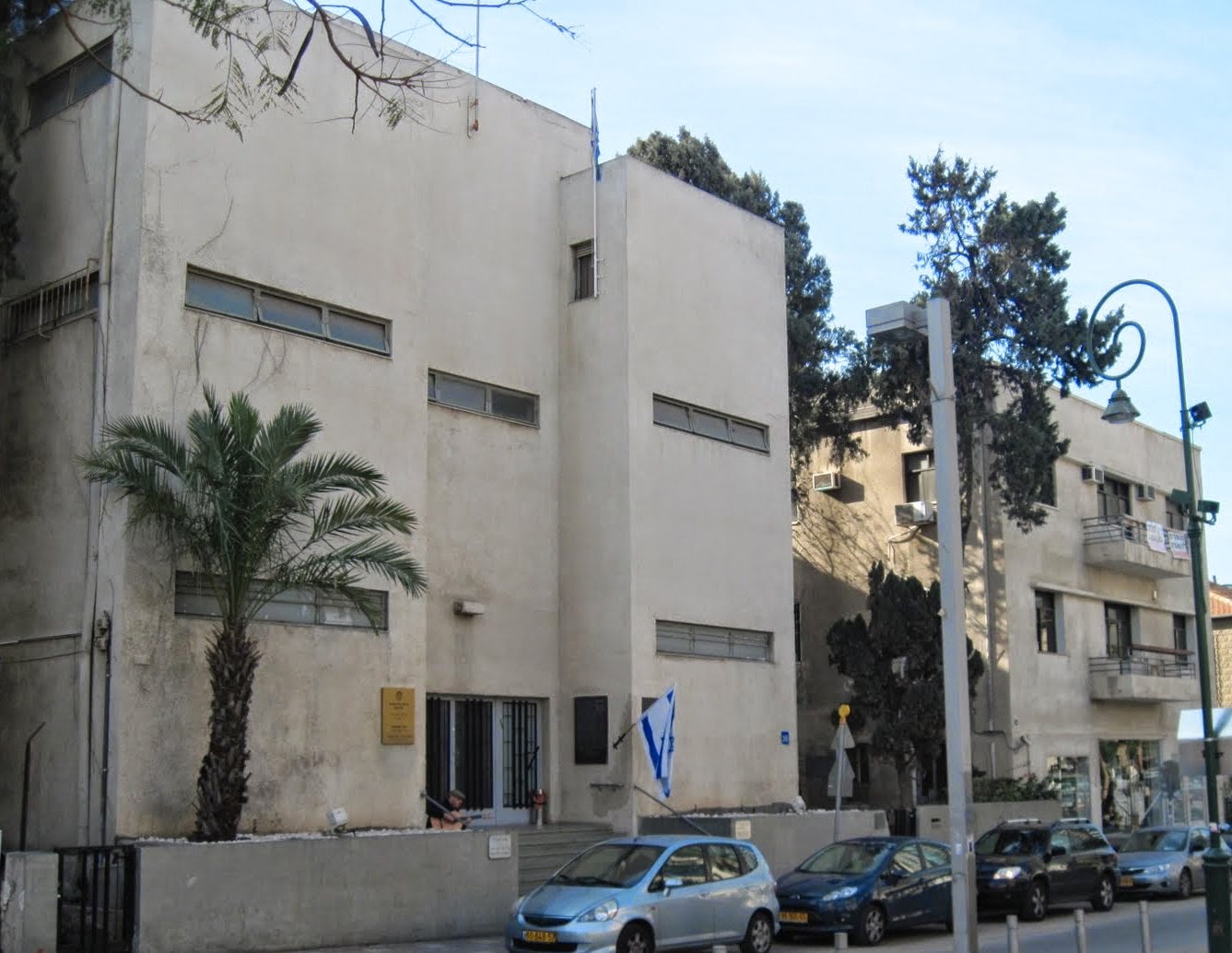 You have such a way to compress history into memorable chunks with salient points.

When we looked at Bauhaus architects in class, many of them went on to make stellar careers for themselves in Tel Aviv. Dizengoff's house still looks to be in great shape.

Thank you! I decided long ago that the way to really understand history is not via text books, royal chronicles or art galleries but by spending time in perfectly preserved house-museums.

My paternal grandma migrated from Russia to the East End of London. The large house was shared by four complete families, and the one toilet was on the other side of the lane. Grandma, her two parents, one uncle and her 9 siblings had two bedrooms.

Visiting one of those flats taught me more about the immigrant experience than all the history texts ever written.

After Bauhaus was closed down in 1933 and the students/staff had to leave, many of them could not go back to their family homes in Eastern Europe. Thus it was Paris, London, Hew York or Chicago, if they could get a visa. Or Tel Aviv.

Tel Aviv was a perfect blank canvas for the young Bauhaus architects, to the extent that the city became known as the White City.

Tel Aviv is such a 20th century city. Normally I go to ancient cities for history tours and save Tel Aviv for the beach, restaurants, concerts.

nod. I have heard that said many times. Personally I am not as interested in Biblical and post Biblical history as I am in:

mass migration waves in the late C19th,
creation of kibbutzim,
draining of the Hula swamps,
building world class universities & medical centres,
modern town planning, and
establishment of the state in 1948.

Hello Hels, By a coincidence, I was just reading about the Tel Aviv museum, something about an exhibit concerning fake antiquities. I think your point about house museums is a very interesting one. Nothing else can capture as well the aura of a specific time, when you know that the people in question actually roamed these rooms and lived their lives within the constraints of the architecture of the building.

While furniture and displays are nice, I often like to go one step further and visit empty houses, in which I can see more of the construction, and roam the rooms and halls myself, free of impediments. Furniture and other decor I can recreate in my mind, but the actual circulation patterns are unique to each house and period.
--Jim

Interesting point! Most people think it would be simple. Take an old home, repair the windows and tiles, paint in heritage colours and rip up the wall-to-wall carpets, exposing the original floor boards.

One of the big issues for restorers is ...which incarnation to return to. Sometimes historians will want to go back to the original version of the house. But it may have been renovated quite a number of times in the interim, as tastes changed and as different families moved in.

Do the records and images survive from each incarnation of the house? What if the heavy Victorian taste wiped out the lighter, more subtle Georgian designs?

Thanks for this nice post and interesting comments and the photo from inside the museum. I've still not been inside it.

I am so old, I almost remember Meir Dizengoff becoming Tel Aviv's first mayor :) Well not quite but I certainly do remember when David Ben Gurion ended his prime ministership for the first time in 1954. The family didn't think that Moshe Sharett would be as significant.

Amazing the stuff we remember. My grandmother had the big portrait of Herzl, overlooking the Rhine in Basel, on her lounge room wall.