Blackpool in Lancashire had three pleasure piers. North Pier 1863 was famous for its theatre, top-class shows, shops and amusements. The facade of the North Pier has been restored to its Victorian splendour. Central Pier 1865, also renovated, had its famous Big Wheel, amusement arcades and shops. I suspect most art history blogs do that too. People who are lecturing during the day ...use their best material for blogging in the evening :). South (Victoria) Pier 1893 was always recognised for its circus marquee style front and a theatre inside. The three piers clearly tried to incorporate everything Victorian Blackpool meant to eager holiday makers: splendid architecture, great views of the beaches and ocean, and a family friendly atmosphere that would not exhaust families’ savings. 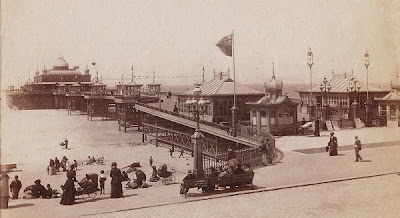 Blackpool says it was the first town in the country to go electric. In fact the tramway opened for business in 1885 and is one of the oldest electric tramways in the world. But the stretch of Promenade between the North and South piers didn’t come to be called the Golden Mile until the final pleasure pier was built in 1893. By then fair-ground operators, fortune-tellers, snack sellers and cold drink stall owners set up in the front gardens of boarding houses, to take advantage of the passing holiday trade. Those entrepreneurial types who knocked down their garden fences and expanded to the street did really well. Now the Golden Mile includes cabarets, amusement arcades, Coral Island, cafes and the Sea Life Centre. But golden? I don’t think so.

Why did Blackpool become so important in late Victorian times? After all the town only had a permanent population of 35,000 by the 1890s, although in each summer season it attracted 250,000 holidaymakers from all over the north.

Like all the bigger resorts, and especially those which catered for the growing working-class holiday market of late Victorian Britain, Blackpool required so-called pleasure palaces. The palaces combined music-hall, variety and dancing with an interesting mix of programmes that included zoos, opera houses, theatres, aquaria, Venetian canals, winter gardens and exhibitions. Blackpool needed this extraordinary mixture of indoor-outdoor entertainment to be dressy but not too highbrow, profitable but not so expensive that working families could not afford a fortnight of fun each summer. 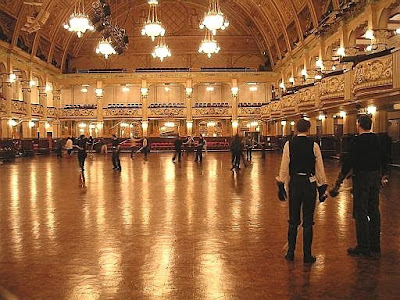 So the first major complex to be built was The Winter Gardens, happily facing the sea. It was a large entertainment complex in the centre of town that was purpose-built for different summer holiday activities. The original specifications asked for a glazed promenade, concert pavilion with 2,500 seats, a library, reading room, picture gallery, ante rooms, provision for open air concerts in the grounds, conservatories, aviaries, croquet lawns and an open air skating rink. The ballroom alone was spectacular, having a barrel-vaulted ceiling, chandeliers and ornate balconies, and the floor was 34 x 13m in size. This enormous project opened in July 1878.

A new book that was first published in 2009 is well worth reading. Winter Gardens Blackpool: The Most Magnificent Palace of Amusement in the World, by Vanessa Toulmin, examined the architectural styles of this amazing building. She described, right down to the tiles, gilding and chandeliers, the ballroom, the opera house and the incredible Spanish Hall, made entirely from plaster. The second resort facility to be built was Blackpool Tower. Inspired by the Eiffel Tower in Paris, this famous English tourist attraction was opened to the public in May 1894. The Tower Circus was immediately given a home at the base of the tower, as discussed so evocatively in The Fylde and Wyre Antiquarian. Both the tower and the circus remain as popular now as they did in 1894.

Frank Matcham (1854-1920) and the two young men he helped to train in architecture were responsible for 200+ of the theatres and variety palaces that popped up all over Britain between 1890 and the outbreak of World War One in 1914. My favourites were His Majesty's Theatre in Aberdeen, the King's Theatre in Glasgow, the Grand Opera House in Belfast, the London Palladium and Royal Hall Kursaal in Harrogate. But none was quite as famous and as elaborate as the Blackpool tower ballroom, as we shall see. 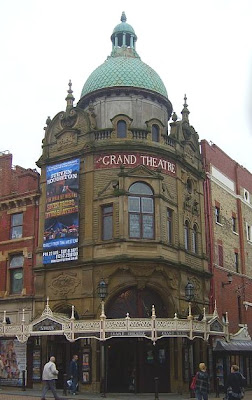 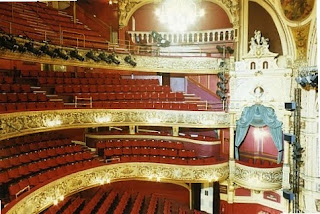 Frank Matcham already had a presence in this city, having designed Blackpool’s Grand Theatre which was built in 1893-4. The interior was rather special since it was Matcham's first theatre to use the cantilever design to support the tiers. This innovation reduced the need for the usual pillars, providing much better views of the stage from all parts of the theatre hall. Despite many attempts to raze the Grand Theatre to the ground since World War Two, the Grand re-opened in March 1981 as a theatre, to stage Old Vic performances.

The Tower Ballroom was also designed by Frank Matcham. Built from 1897 and opened in 1899, it had been commissioned by the Tower company in response to the very successful Empress Ballroom in Blackpool’s Winter Gardens. This seemed extremely risky. Blackpool was clearly a firm holiday favourite for sea bathing and for amusements, but how many grand ballrooms could this rather small north-western city accommodate? 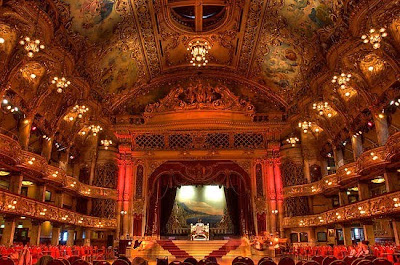 Anyhow, by the time The Tower Ballroom was finished, its floor was 120 x 120’ and was made up of thousands of blocks of mahogany, oak and walnut. And there were gorgeous crystal chandeliers. The famous Wurlitzer organ (1929), however, was not installed for decades.

Even more risky to tourism, dancing was not allowed on Sundays; instead, sacred music was played. The ballroom originally had very strict rules to ensure good behaviour so I suppose visitors felt they had better be on their very best behaviour. In 1956 the ballroom was damaged by fire and the dance floor was destroyed. But since the restoration, the Tower Ballroom has been well used and well loved. 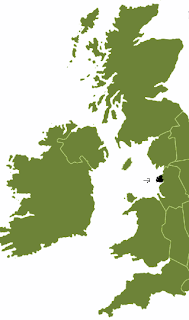 Blackpool, marked on the west coast

The Blackpool Lido was also spectacular, but since it wasn’t opened until after World War One, I will leave it till a later article.
Posted by Hels at 8.9.10

Fascinating post. My parents remember dancing in that ballroom in the late 40's. When I went a few years ago it had all gone very down market.

Excellent article. I was in Blackpool a couple of days ago and, I'm glad to say, that after having looking tired and run down for quite some years now, the council have spent millions doing the place up with pleasant, tree filled, cobbled, pedestrianised areas complete with italian renaiscance fountains and other such upmarket asides. It's good to see the old place getting back on its feet.

Hermes and Brian, I wonder how much of the neglect was because of a true change in tastes in holiday entertainment, especially after WW2 and how much was due to later snobbery about working class pleasures in the late Victorian/Edwardian era.

If the growing working-class holiday market was going to have its needs met for two wonderful weeks every summer, the bigger resorts had to offer every pleasure that the mind could think of. Blackpool, Southend and a few other resort towns did it really well... families had a fantastic time.

We had similar places in Australia, for example the Palais de Danse in Melbourne and Cloudland Ballroom in Brisbane. But they were not nearly as exciting as Blackpool's ballrooms. From the stories I have heard, many of our fathers squired their girlfriends around these ballrooms, for a fairly small entrance fee.

Oooh, I am going to have to ask my father which one of those ballrooms he took me into because we definitely went into one of them. I used to love Blackpool. I am not to sure about upmarket or downmarket. Spending time in the north of England with my father, I certainly learned to appreciate my family's working class roots as my father tried to teach me about the heart and soul of the north. But large parts of Blackpool are certainly in need of repair or funding or interest from historical societies.

Very well heeled families had always been able to afford interesting holidays. But ordinary working families did not receive a week's annual holiday until the 1870s and a fortnight's holiday until the 1890s. People saved all year, so that they would have spending money during their fortnight away.

I think the special quality of Blackpool was that it recognised the desirability of providing great fun-filled holiday activities for working families. No wonder that by 1900, this town attracted 250,000 holiday makers from all over the north, every summer. The town must have been hopping and jumping!

If I had lived in Edwardian times, I most certainly would have chosen Blackpool (or perhaps one or two other beach resorts) for my annual holidays.

I would just add Helen combined with cheap forms of transport and a small but significant disposable income.

A good quick history.I very much enjoyed my visit to Blackpool, even though it could be described as seedy. Part of its charm. You might take what Lord Hughes says with suspicion.

Andrew and Hermes, you have both drawn attention to the down market seediness of the facilities that were once so gorgeous, in the late Victorian era.

There was no further development of note in the Edwardian era, but it was still all in beautiful condition for the increasing crowds of holiday makers during the inter-war period.

So when did the wheels fall off? Most people suggest when cheap air travel arrived in the 1960s and made other countries more attractive holiday destinations.

Because I was analysing the growth of late Victorian facilities, I suppose I don't have to address myself to modern Blackpool. But the amount of money being poured into the city recently suggests that the post-WW2 seediness was not attractive.

Just as a personal note, when we lived in Britain (Herts), my family had holidays in Brighton and Bournemouth. But I am certain that northerners would still prefer Blackpool and Scarborough.

Well, in fact, my Dad was in Scarborough on Thursday and he says he had the best fish and chips he has ever had in his life. They like the Lake District too.

One of the highlights of a previous job was attending conferences in the Winter Gardens. The Spanish Ballroom was always a favourite of mine - along with the Galleon Bar, whose interior was indeed themed on that of a galleon.

Emm, your note about Scarborough arrived about 5 minutes after I mentioned Scarborough :) We may be 15,000 ks away but the internet records our coincidences in thinking AS THEY OCCUR!


Caroline, it is not at all surprising that conferences are keen to book the Winter Gardens in Blackpool every year, nor that you should remember that part of your job fondly. The Winter Gardens were built with the specific idea of knocking peoples' socks off with delight.

Blackpool is a beautiful destination. My family and I love to go there. My children love the Sealife aquarium and my wife and I can't stand the beach. It is awesome.

I am a passionate beach person and must live within 5 ks of the sand. But I know not everyone is. So a truly sensible resort will try to provide a wide range of activities and entertainments for all ages. Looks like Blackpool did well for your family :)