Australian Bushfires in Art I

It must have been shocking to European artists in the C19th that they had come to a brown land full of dangers. It is true that most art­ists did not live in the harsh, dry bush areas except for the land beyond Melbourne and Sydney. But they understood the smallness of human beings in the vastness of the landscape.

They may well have visited the bush, as we can see in the very Aust­ralian images created by the Heidelberg School. And this is where we start to see some of the tragic elements of living in an inhospitable land eg Frederick McCubbin painted A Bush Burial 1890 where a pion­eering family had to conduct a funeral as best they could, far from “civilised city life”.

But no event was more terrifying than fire, arguably an integral part of Australian life. Despite the loss of trees, animal life, homes, farms and even human life, it was always clear that hot, dry, windy summers created the perfect environment for fires to explode into action and spread.

John Longstaff (1861-1941) was born in central Victoria and would have understood bushfires from his own family’s experience. As an adult and established artist, Longstaff was well aware of the bush­fires that ravaged Gippsland in 1897–98 and caused terrible damage. Two townships were razed to the ground, hundreds of settlers were burnt out and livestock died where they stood. Longstaff visited the area later in Feb 1898 to investigate the aftermath of the fires and to sketch in preparation for a major work. 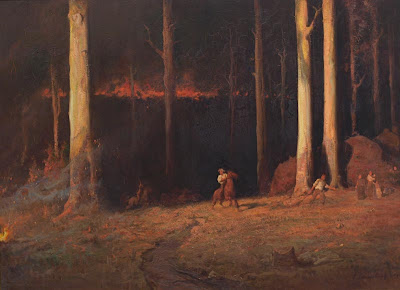 Gippsland, Sunday night, 20th Feb 1898 was HUGE. In it, Longstaff managed to capture the major themes of bush fire icon­ogr­aphy: helplessness, loss and utter desolation. City viewers were impressed and depressed when the painting was quickly exhibited in his Melbourne studio (in Aug 1898).

In 1898 the National Gallery of Victoria purchased his painting. The work will definitely resonate with Victorian viewers, still reeling from the February 2009 tragedies.

Sunnysideup blog and Gritfx blog have shown that bushfire photos are certainly more immediate than paintings and possibly just as mesmerising.

Your Post on australian Bush Fires does raise the interesting question as Why do Artists paint what they Paint?
it is not just about pretty picture take war artists as another example. artist record life the god bad and plain ugly.h