Julia Cameron, Lord Tennyson and the Isle of Wight

Julia Margaret Cameron (1815–79), raised in India and educated in France, did not take up photography until the age of 48 when she was given a camera as a present. Yet her work had a huge impact on the development of modern photography, especially her closely cropped portraits. Foto-Tube blog noted her soft focus and said that Cameron became known for her Arthurian legends in pictures. You can see beautiful examples of Cameron's photos in the Pre Raphaelite Art blog. 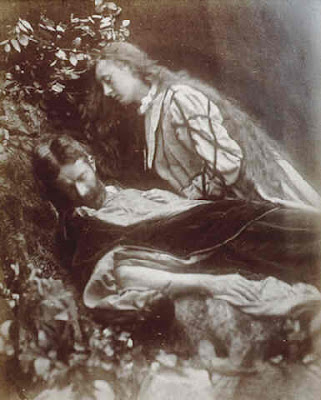 The Earthly Paradise blog made particular mention of the new Julia Margaret Cameron Exhibit . Her photography is on display at the Portland Museum of Art in Portland, Maine during 2009. This travelling exhibit will move to the Frick art and historical centre in Pittsburgh during the period Oct 2010 - Jan 2011.

The exhibition is called "For My Best Beloved Sister Mia: An Album of Photographs by Julia Margaret Cameron." The works included in the showing were put together for Julia Margaret Cameron's sister, Maria Mia Jackson. Cameron originally gave her sister the partially filled album as a gift in July 1863, at the beginning of Julia's experiments with photography. Over the years, Mia filled the album with many of her sister's most iconic images.

Induro and Little Augury blogs added new information. As well as being the grand dame of Victorian photography, Cameron was the great aunt to sisters Virginia Woolf and Vanessa Bell (both nee Stephen) . That was one, very impressive family.. The girls were avid amateur photographers during their young years, and became two visually creative adults in their aesthetic and personal lives. And feminists, of course.

Julia Margaret Cameron was known for two things: illustrations of poems & other texts, and portraits of her Victorian contemporaries. The illustrations look a little contrived today; but the portraits, especially the monumental head-shots, remain mesmerising to us moderns.

Since very long exposures were needed, typically up to quarter of an hour, two elements were set in place: a] Cameron had to use a tripod device to keep the camera still. And b] she used the collodion wet plate process. Those long exposures are partly responsible for the wonderful softness and blurring in her images, but there may have been something else as well. At a time when photographic sharpness was valued, Cameron ran the risk that her images would be seen as feminine and soft edged. But Cameron didn't seem to be operating accidentally. She created an ethereal sense that has survived well.

Clearly there are many bloggers interested in Cameron. I became particularly interested in her photographic art career via Alfred, Lord Tennyson. So if I want to add something special to the blogging world, I will need to focus on her time on the Isle of Wight, as did Graphic Arts blog. 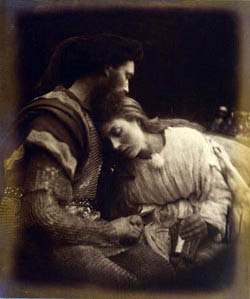 Cameron’s career was a short one, covering no more than the last 11 years of her life. In 1874, she was living near to Alfred, Lord Tennyson at Farringford Freshwater on the Isle of Wight. Tennyson had taken Morte D’Arthur, published in 1842, and expanded it into Idylls of the King in 1859. He asked Cameron to make illustrations for a new publication of these poems and she produced 200+ prints from wet-plate collodion-on-glass negatives. Unfortunately, the publisher chose only two to be reformatted as wood-engravings and she wasn't very happy with the results.

With Tennyson’s encouragement, as Graphic Arts blog showed, Cameron did in fact publish her own work with albumen silver prints interspersed with texts by Tennyson, lithographed from Cameron’s hand-writing. One volume appeared in Jan 1875 and the second in May, selling well. Both frontispieces had a portrait of Tennyson.

And it was her home on the Isle of Wight that gave her access to the Tennysons’ neighbouring home and to all the celebrities (eg Charles Darwin) who visited them. Of course Cameron's portraits were loved for their romantic quality and became well known because of their close association with the Pre-Raphaelite movement. But if it was not for her closeness to the Tennysons, her career might well have stalled. In any case, she died in Ceylon in 1879, not even at home on her beloved Isle of Wight. 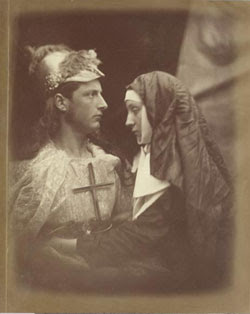 Her island house and studio, Dimbola Lodge, can still be visited today - it is open to the public as a photographic museum and exhibition space.

I've enjoyed my visit to your blog. Nice post. and.... Thanks for playing the word game. I liked your word. It was new to me! :)

I wrote to Graphic Arts blog at
http://blogs.princeton.edu/graphicarts/2009/03/cameron.html:

"Julia Cameron is a never-ending topic for modern art historians, isn't she? I cited your work in my blog and created a link to your gorgeous images. Thanks
Hels"

not quite as good as the preRaphaelite painters, but gorgeous misty photos.

Hi, my name is Ela and i'm a student of photography in Poland. i would like to know more about the famous photo by Julia Margaret Cameron 'Julia Jacson' 1867, and after a very interesting comment you've posted on Pre-Raphaelite paintings' blog, i was wondering maybe you have some information or own thoughts on the picture, because you seem like the right person to ask;) it's quite hard to find a good analysis of this photo, and i want to study it more.
I would appreciate any help or direction.

Julia Cameron was not only famous in her own right. Her niece Julia Prinsep Jackson Stephen wrote the biography of Cameron in the Dictionary of National Biography, 1886 AND was the mother of Vanessa Bell and Virginia Woolf. What a family of women :)

If you are happy to read books and catalogues in English, I would start with Wolf Sylvia, Julia Margaret Cameron's Women, Art Institute of Chicago, 1998.

A good blog to have a look at is Pre-Raphaelite Art http://preraphaelitepaintings.blogspot.com/2010/08/julia-margaret-cameron-julia-jackson.html

best wishes with your project
Hels

For excellent Cameron photos of the entire Tennyson family, see the blog: Kimberly Eve Musings of a Writer