There is absolutely nothing wrong with holidays that are about the Four Ss: sun, sea, sand and sex. Many people are exhausted from work during the year; they want to drop their bottoms onto a poolside lounge, looking out at a panorama of palm trees and drinking daiquiris, in an attempt to refresh and revitalise. It is a holiday that is guaranteed to be safe, predictable, very restful, health-giving and non-challenging.


Even if many people are a little more adventurous than just swimming and sunbaking all holiday, they are clearly aware of the awkwardness of travel, particularly in countries very different from home. 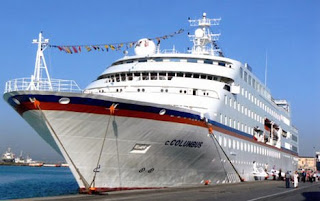 I thought there had to be more, so I set out to locate tourist packages that specialised in educational or cultural matter. P&O had begun began schools cruises in the 1930s. They offered two cruises to Norway for students and their teachers, during the summer holidays, on the ship The Neuralia. On each cruise there were well over a thousand pupils. By the 1960s these educational cruises had become popular and P&O ran two school cruise ships, both offering year-round programmes. Gill’s Cruise Centre said that many British travellers had their first experience of foreign travel through these ships, especially the SS Uganda and SS Nevassa.

Over the years cruise lines have expanded their cultural programmes and it makes sense to me that theme-cruises can enhance the entire travel experience. Their programmes offer lectures on a wide range of topics, chosen to complement the trip's itinerary. They will, for example, include talks on the history of the next port city to be visited, its local culture and the regional cuisine. They may well add language classes so that disembarking passengers will be able to ask basic questions in the next port they visit. 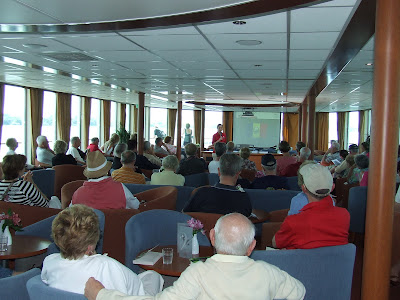 Viking Neptune, lecture on board ship

Lectures and classes are usually scheduled for at-sea days, when the only competition is the swimming pool or the bar. Lecturers often prepare three or four formal talks, but they will also expect to mingle with passengers and may be asked questions about their specialty in non-academic settings.

I don’t want to advertise but I do want to see if cultural travel is widespread. Olsen Cruise Lines’ Civilisation Cruises provide destination lectures, they say, to open peoples’ eyes to a range of cultures. They focus on a wide range of topics including Celtic History, Ancient Civilisations, The Great Artists and In the Wake of the Navigators. Newer topics include Ancient Polynesian Culture, Ages Of Discovery, Baltic Monarchies, Polar Exploration, Ages of Conflict, Baltic Literature and Ancient Mythology. Each course has been designed to appeal to lovers of culture and the arts. They are clearly targeting travellers who expect to cruise in comfort AND to learn about the places they will be touring.

Martin Randall Travel notes that many of their tours involve elements of various categories eg a combination of art history, architecture and music. For their Baltic States cruise, for example, they cover three countries with different languages, diverse histories and distinct cultural identities. Plus they are interested in an extensive legacy from German, Polish, Russian and Swedish occupations. So the focus of the Baltic tour is history, politics and general culture, both in lectures on board and in on-shore visits.

Ace Cultural Cruises have smaller groups that are led by specialists in the fields of archaeology, history, art, architecture, wildlife and music. They say they select their lecturers for their academic expertise, of course, but also for their ability to communicate well in the cities they are visiting. On their Ephesus and The Cities of The Aegean cruise, one of their lecturers studied archaeology then theology before working overseas as an archaeologist, specialising in Roman frontier systems and Byzantine mosaics.

Note that one company wrote on its pamphlets "No Dumbing Down. There is no casino, no piped music, no cabaret, no disco. The major source of entertainment is conversation with like-minded passengers". "The number of passengers is limited to engender a more cohesive and congenial atmosphere socially and allow greater access to museums and historical sites". A bit precious, but that is the type of holiday I'd like. 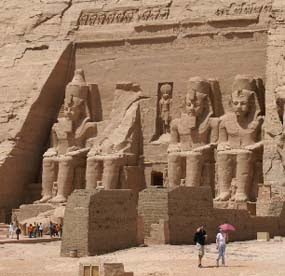 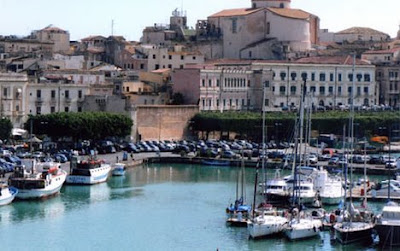 Of course it comes at a cost. Matt's Samoa Blog registers the implications of a sudden arrival of a cruiser-load of tourists on a small nation like Samoa. There are stories of tourists using up the locals' precious drinking water supply, leaving plastic rubbish in the bins or needing productive farmers to leave the land to become non-productive waiters for tourist hordes. I wonder if the cultural lectures can include warnings about treading lightly on other peoples' homelands.

I'll pop into your pocket for the trip! They're my kind of holiday ...
June also in Oz

Interesting article. My school offered an educational Mediterranean cruise on the SS Uganda in the 1970s. I couldn't afford to go, but I did get to see the Uganda a few years later as it rusted away on the Fal river in Cornwall before it was towed away to be scrapped. It was all very sad.

I think an educational cruise becomes more and more attractive the older I get!

I went on a cruise just recently that combined travel with organised tours of art and architecture in each and every Mediterranean port. It was the best of both worlds!

Young people do go on such cruises, I suppose, but in my experience they tend to appeal to a slightly more mature, more historically minded group of travellers.

My name is Annie and I'm a writer and researcher. I’ve been doing a lot of work in the art and travel field recently and I thought this piece would be a good fit for you -
http://www.iglucruise.com/art-cruises

The article takes a clean approach to the topic highlighting the many benefits of combining travel with art and culture.

My own art is nothing to write home about, but every place i've been to has inspired me. I've found that no matter the type of vacation, including cruises, seeing something new and beautiful makes me want to sketch or paint.

This piece is a good starting point for those looking for where to start their journey, and it really does deserve a mention on your site. As one of the team who put it together, I’d love to see it up there.

For people interested in 17th century art, examine the tour called "Dutch Painting - Art in Amsterdam, Haarlem & The Hague". These painting of the Dutch Golden Age will present a coherent and detailed picture through art, architecture and personal histories of painters, patron and citizens during the Golden Age.

There will be plenty of time for the Rijksmuseum in Amsterdam which reopened a few years ago as Europe’s best-displayed national gallery. The Mauritshuis in The Hague also reopened in 2014 after complete refurbishment and looks set to become northern Europe’s most alluring small museum. Vermeer, Rembrandt, Hals etc will be the stars.