Alexandra Palace was to be built in the Muswell Hill, North London in 1873 as a public centre of recreation and education. The Great Northern Palace Company had been established by 1860, but financing the project was so difficult that by July 1863, only the park had been opened to the public. Alexandra Park was named after Alexandra of Denmark, who had recently married Prince Edward, the Prince of Wales.

The original design suggestions came from architect Owen Jones (1809-74). People at the time suggested the complex was North London's counterpart to the 1851 Crystal Palace in South London. This may have been even closer to the truth than they realised: Jones had been responsible for the interior decoration and exhibits for that Great Exhibition building, Crystal Palace. And after the building was moved to Sydenham, Jones was jointly responsible for the decoration and layout for the new Crystal Palace  which opened in 1854 as a "permanent" venue for education and entertainment.

However when construction of the Alexandra Palace commenced in Sept 1865, the design was somewhat different from the glass structure initially proposed by Jones. Architects John Johnson (1807-78) and Alfred Meeson (1808-85) took over formal responsibility for the building.

Parliament declined the plan to purchase the main building from the 1862 World Exhibition in London, so it was demolished and the materials were used to build Alexandra Palace instead. Set in its own gardens of 196 acres, this lovely new palace covered 7.5 acres.

In 1871 work started on a railway line to connect the site to Highgate Station. Work on both the railway and the palace was completed in 1873 and, in May Alexandra Palace and Park was opened. Ordinary working families must have loved the site; hundreds of thousands visited in the first fortnight.

Sometimes I cannot believe how lucky I am. William Parrott (1813-75) painted a View of Alexandra Palace on the Hill before the Fire, a painting I had never heard of. Would you believe that Victorian Paintings blog posted that very painting a fortnight ago, showing the height of the hill and the density of the bushland.

Alas only 16 days after the Palace was inaugurated, a fire destroyed the palace and some members of staff. The magnificent exhibition of English porcelain, containing 4,700 important objects, was destroyed. 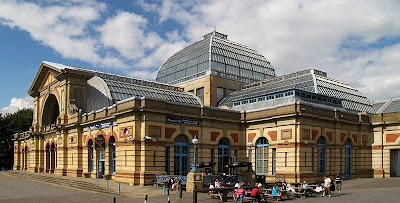 Fortunately the palace was quickly rebuilt, the glass expanses replaced by stronger materials. Pillars provided storage for tons of water in the four corner towers and in reservoirs built into the end walls of the Great Hall. Reopening in May 1875, the rebuilt palace contained a concert hall and theatre, art galleries and a museum, a lecture hall and library, and a banqueting room. They were certainly ambitious.

Apparently an open-air swimming pool and a race-course with grandstand were built in the surrounding park, but I haven’t seen any photos of them. What I have seen photos of are the Japanese village, a lovely boating lake and a golf course. Cricket and football club have played within the grounds since 1888. TravelBlog said Alexandra Palace - A palace for the people gives a panoramic view of the city because the location is London’s highest natural point.

In a disastrous move that sounds eerily modern, the owners of the Palace and Park were threatening to sell them for redevelopment at the turn of the century. It literally became the People's Palace by the Alexandra Park and Palace Act 1900 that gave the facilities to the people of London, with its Park, in trust for all time. As with all great buildings, according to Ali’s Blog, Alexandra Palace was converted to other uses at times of national need. During the 1914-8 war, for example, the park was closed and the palace and grounds were used as a refugee camp.

Later, in the 1930s, it was used as transmission centre for the new BBC Television Service. Success Mastermind Alliances blog described visiting the Palace this year to see the old BBC studio, where the first high definition TV was transmitted, and the Alexandra Palace Theatre. 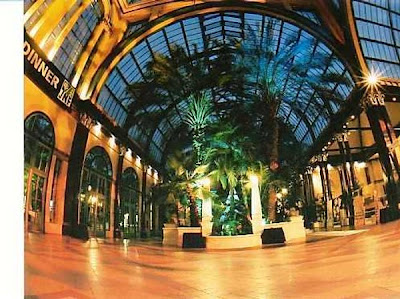 The cavernous Great Hall and West Hall are now used as an exhibition centre and conference centre, operated by the “trading arm” of the charitable trust that owns the building and park on behalf of the public.

It looks pretty in daylight! I went there for a concert in November 2005 and never really appreciated its beauty.

Thank you for your great post on Alexandra Palace...

I came across this post by accident while searching for something else online...

I've been researching and learning about Alexandra Palace for the past 2.5 years...

I have been thinking and writing quite a lot about the International Exhibition that was held in London in 1862. It didn't occur to me till much later that the materials for Alexandra Palace came directly from those 1862 Exhibition Buildings.

I have created a link with The Victorianist:
http://thevictorianist.blogspot.com/2010/11/international-exhibition-of-1862.html

What a great blog that is Hels! I can see myself spending lots of time there.

I never thought I would know everything there was to know about a particular topic. But I didn't think other bloggers would add to the world knowledge base, either.

So isn't it great when you accidently fall on a mother lode (mixed metaphor, I think)!

Yes, the degree of community and cross-sharing is incredible. I love going places that have been recommended to me by others and I love seeing others visit places I have recommended.

London is a city that has a lot of interesting things to offer to its guests. Traveling around London tourists can find lots of attractions and entertainments. There are many interesting places to see and visit in London and Alexandra Palace is one of them. The palace is conveniet at the highest place of the city and provides beautiful views of London. Thanks for the detailed description of Alexandra Palace and its history. Hope that more travelers will desire to visit it in the future.

Have a close look at the theatre, as large as its West End counterparts. It was used as an early cinema and still survives today. See Caroline's Miscellany

In July 1980, the palace caught fire once more, destroying much of the original building, including the Great Hall. It reopened again in 1988, the sheer size of the venue meant raising funds for the upkeep proved tricky. Nowhere has this been more apparent than the theatre.

The current restoration plans were first mooted in 2011 and construction work began in 2016.

Thank you. The poor theatre had quite a history, didn't it. It was first designed to seat 3,000 people, showing pantomime, opera, dance, music hall and my favourite, ballet! I can imagine that after 80 years of neglect and decay, reconstruction must have been endlessly problematic.