I could be seen as having two vested interests in this story (being Czech and a doctor). But I will try not to exaggerate the importance of  some brilliant Czech medical science.

Throughout history, people knew it was imp­os­s­ib­le to live without blood, but they knew nothing about its com­p­os­ition. Most of the dis­coveries about this vi­tal fluid only em­er­ged after the invention of good microsc­opes and medical proced­ur­es. Thus serology began as the scientific study of serum and other body fl­uids in c1900. In practice serology ref­er­red to the diag­nostic id­ent­ific­at­ion of antibodies in the serum. Anti­­bodies were typically formed in res­p­onse to an infection, against other foreign proteins, or to one's own proteins as in auto-immune disease. 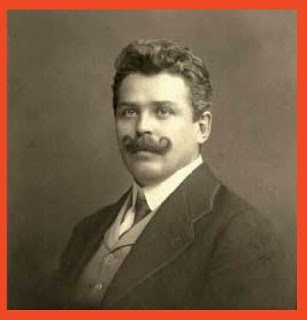 Jan Janský 1902
Facebook
Jan Janský 1873-1921 was born near Prague, son of a soap maker, and studied medicine in Ch­arles Uni Prague. From 1899 he work­ed in a Pr­ag­­ue psychiatric clinic and once he became a Professor, he gave expert psychiatric evidence in many court cases.
Dr Jansky was interested in if, and how men­­tal disorders were triggered by blood disorders. He wanted to learn if the serum of psych­otic patients, esp­ec­ially schiz­o­ph­­ren­ics, differed in its coagulation char­ac­teristics from the one from the nor­mal people. In a sam­ple of 3,160 mentally ill patients that he examined, Dr Jansky demonstrated that human blood was divided into 4 basic types accord­ing to specific differ­ences in the properties of red blood cells. With the blood coagulation, Jansky establish­ed in his original research  the four basic blood groups that we now call A, B, O and AB! 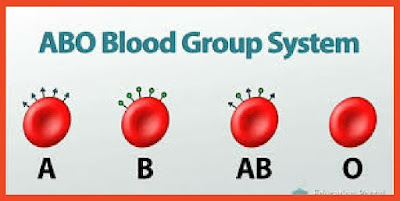 The ABO blood group system depends on the presence
or absence of an A or B antigen on the red blood cells.
Study.com
How­ever he did not go on to do further research on blood and focused solely on psychiat­ry and neuro­logical disorders. Dr Jansky intens­ive­­ly re­s­earched the nature and signific­ance of cerebrospinal fluid. After some years of research, he concluded that there was no correl­ation between blood clotting and human mental illness. So in Nov 1906 he gave a lect­ure, then published his findings in a Czech paper cal­l­ed Haematologic St­udies in Mental Patients (1907), report­ing no cor­rel­at­ion bet­w­een the two. Fortunately in the study he did rep­eat how he classified the four types of blood.

Austrian biologist, physician and imm­un­ologist Karl Landst­ein­er (1868-1943) studied medicine at the University of Vienna. To specialise in chemistry he spent five years in the laboratories of Hantzsch at Zurich, Emil Fischer at Wurzburg and E. Bamberger at Munich. Back at home, Landsteiner resumed his medical studies at the Vienna General Hospital, and in 1896 he became an assistant under Max von Gruber in the Hygiene Institute at Vienna.
Landsteiner also described the existence of blood groups, but he only identified 3 groups, not the 4 groups we know today. At the time, Drs Janský and Land­st­einer were unaware of each other's work. Later Dr Landsteiner accepted an invitation to go to the Rockefeller Institute, New York. 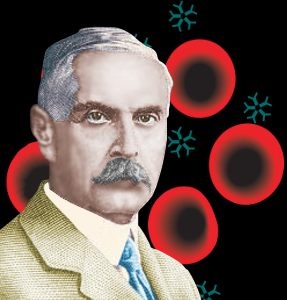 Karl Landsteiner
Famous Scientists
A similar classification was described by Am­erican physician Dr William Moss. He dev­el­op­ed the Moss System of blood groups in 1910, used to ensure safe transf­usions. The only issue was that Moss’ blood groups I and IV were the opp­osite of Janský's, leading to some con­fusion in blood transfusion. Note that Dr Moss researched the blood types independently of his Eur­opean colleagues. He heard about Dr Jánský only after his dis­c­overies and before their publication in 1910. Later he rightfully credited Dr Jánský with the discoveries.
Dr Jan­ský's discovery was not really noticed, nor celebrated. But in any case, WW1 started and Jan served 2 years as a doctor at the Front, until he suf­fered a heart attack which prev­ented him from serving longer in the army. However he spent the rest of WW1 working as a neuro-psychiatrist in a military hospital.

With his discovery it made poss­ible to make the transf­usions without the risk that the patient might die when receiving the blood of an in­app­rop­riate donor. Jan’s contrib­ution thus saved many lives by in­suring they got the right type of blood during a trans­fusion. Rec­eiving an incompatible donor’s blood could have been terrible.

The different systems continued to create some danger in U.S medical practice. To resolve the issue, the American Association of Immunologists & Association of Pathologists & Bacteriolog­ists made a joint recommendation in 1921 that the Jansky classific­ation be adopted.

Janský was also a committed proponent of voluntary blood donations, campaign­ing for or­dinary citizens to give. This human­itarian legacy lives on today, when people who donate blood regularly in the Czech Republic and Sl­ov­akia get a Jansky medal of honour. What a fitt­ing way to hon­our his contribution to science!

In 1921, America’s Medical Comm­is­sion acknowledged Janský's 4-group classif­ic­ation over Dr Land­st­einer's who classified blood into only 3 groups. So I am still uncer­t­ain why Landsteiner won the No­bel Pr­ize in Phy­siology or Medicine for his blood type discovery in 1930!! One explanation was that Dr Jánský, as a spec­ial­ist psych­iatrist, did not further build on his res­earch - he was still working as a neuro­psychiatrist in a military hospital when he died in 1921.  Meanwhile Dr Landsteiner dedicated his medical life to blood research.

Summary Dr Jansky was a Czech serologist, neurologist and psychiat­rist. He was cred­ited with the first classification of blood into the four types but never won a No­bel Prize or other world honour. On­ly decades la­ter was the man slowly celebrated as the true discoverer of the 4 blood gr­oups.

Your detailed history on the blood group discovery is outstanding. It is easier to read than any textbooks I can find. How interesting it is that it was Jan the Jansky tried to find a link between mental illness and blood coagulation profile. Funny astrologists come up with different personality traits to various blood group type. I know Czech is currently researching in gene therapy and vector therapy in bone marrow stuff as an odd one out of the world research world

So we owe a great deal to Professor Jansky for saving us by identifying the four blood groups thus ensuring that in the future we all got the right blood transfusion. Very interesting post. A shame that he did not get full recognition for his discoveries about blood. Thank you for posting.

That's an interest history of something so important. So often people have made great discoveries and failed to receive proper recognition. in my younger years I recall people used to know their blood type but it seems to fallen from favour now.

Those Czech and Austrian medical researchers were brilliant.

roentare, that Jansky tried to find a link between mental illness and blood coagulation disorders seems reasonable now. For example, Harvard School of Public Health showed that people with A, B, or AB blood types might be at a greater risk of developing coronary heart disease than people with blood type O. It may not be confirmed, but serious research needs to continue.

Rachel the four basic blood groups, A, B, O and AB, were unknown at the turn of the century and now everybody knows about them. But had he had more support from the Universities and the Medical Organisations, Dr Jansky might have been sent to dozens of conferences and had his journal article translated and published in medical journals all over the world.

Andrew Yes of course... we all knew our blood type in high school.

Even now the most important reason to know your blood type is in case of an emergency i.e where you require a blood transfusion instantly. But Rh incompatibility between a pregnant mum and her baby can also be important.

There may well be a connection between certain blood types and the risk of blood clots or kidney stones. I would ask your doctor for detailed information.

Australian Doctor, my parents kept telling me that, all the way through high school!

I think young Australian medical graduates would be just as innovative and clever, if only they were paid a decent salary to spend a few years in top quality research.

A great post Dr Joe, especially as I am off to give blood on Saturday . I didn't know any of this and didn't realize that the difference was in the type of red blood cells . Are the surfaces different ??
I have received 2 blood transfusions after post partum hemorrhage and each one saved my life. It is very humbling to realize that for vast majority of human existence I certainly would have died. .

You can thank Jan Jansky and his colleagues for a good life!

thank you for reading the post, but no advertising please