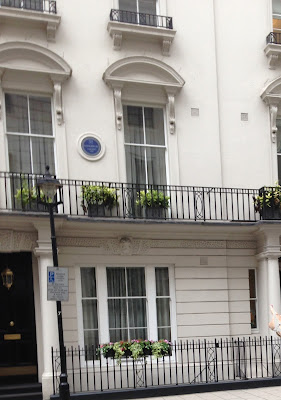 Napoleon III in Westminster,
erected 1867 and is the oldest surviving plaque
A commemorative plaque scheme was first suggested to the House of Com­mons by William Ewart MP in 1863 and taken up by the Royal Society of Arts in London in 1866. They first comm­em­orated the poet Lord Byron at his Cavendish Square home, but this house was demol­ished in 1889. So the plaque to Napoleon III in Westminster, erected 1867, is the earl­iest to have survived.
The Society of Arts’ earliest plaques had special patterned bord­ers showing the Society’s name. Plaques were made of bronze, stone and lead, in square, round and rectangular forms, and were finished in brown, sage, terracotta or blue

In 1901 London County Council/LCC took over the scheme and formalised the selection criteria. The LCC’s first plaque commemorated historian Thomas Babington Mac­aul­ay in 1903, and then Char­l­es Dickens’ house in Doughty St.

Known as the Indication of Hous­es of Historical Interest in London, the LCC continued to use the Minton factory, and they developed a highly dec­or­ative laurel wreath border with ribbon additions eg see the LCC plaque for librettist WS Gilbert in Sth Kens­ing­ton. In the 35 years of Society of Arts man­age­ment, it put up 35 plaques. Barely half of these surv­ive, but John Keats, William Makepeace Thackeray and Edmund Burke’s did. 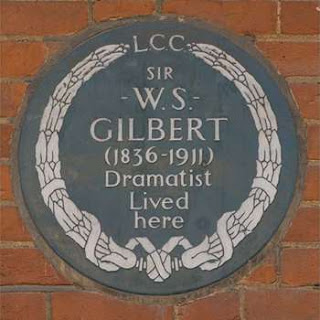 The blue ceramic plaques became standard from 1921 because they stood out best in the London streetscape. They were made by Doulton from 1923-55, with a colourful raised wreath border. In 1938 the modern, simp­lif­ied blue plaque was designed by a stud­ent at the Cent­ral School of Arts and Crafts. This omitted the laurel wreath and rib­bon border, & sim­p­lified the overall layout, allowing for a bold­er spacing and lettering arrangement. After WW2, plaques continued to be unveiled at a regular pace. By 1965, when the LCC was abolished, it had been responsible for creating nearly 250.

The LCC’s successor, Greater London Council/GLC, covered a wider area, now including Rich­mond and Croydon. From 1966-85, when the GLC was ab­olished, it had put up 262 plaques, honouring stars like Sylvia Pank­hurst women’s campaigner, Mary Seacole Jamaican nurse and Crimean War heroine, and composer-conduct­or Samuel Coleridge-Taylor. From 1984 on, ceramicists Frank and Sue Ashworth made the blue plaques. 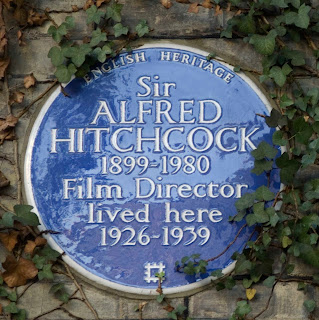 Alfred Hitchcock plaque
awarded in 1999
English Heritage took over the scheme in 1986 and didn’t change much. Except to be awarded an official English Her­itage plaque, the proposed person must have died 20+ years prev­iously. Its first plaque was in 1986, commemorating painter Oskar Kok­os­chka at Eyre Court in Fin­ch­­ley Rd, even though Kokoschka had been honoured with a CBE back in 1959. English Heritage’s recent pl­aques have rang­ed from Alan Tur­ing to the guitarist-songwriter Jimi Hendrix. Sin­ce then English Heritage added 360+ plaq­ues, bringing the total across London to 933.
In 2013–4 government cuts threatened the scheme, but its future was secured by large donations. English Herit­age bec­ame a charity in 2015 and still manages the scheme. 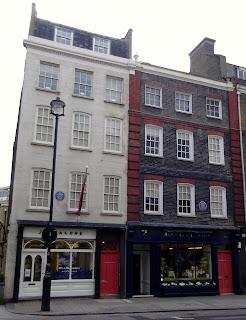 Hendrix and Handel homes
museums on upper floors, 23-25 Brook St, Mayfair.
The most recent plaque honoured Isaiah Berlin, philosopher-polit­ic­al theorist-historian of ideas, whose Two Concepts of Liberty is an influential political text. Berlin’s plaque is at his child­hood home in Holland Park. 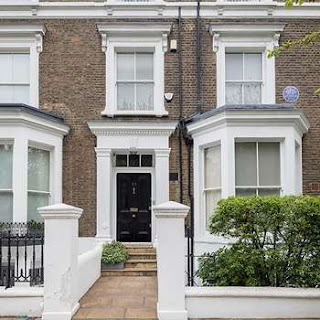 Isaiah Berlin, the newest plaque, 2022
33 Upper Addison Gardens, Holland Park
Is it too high for pedestrians to read?
I studied Australian history in primary school, but only British Em­p­ire, European and Russian history in high school & university. So when historians called for a Blue Plaque Programme in NSW years ago, I tho­r­oughly agreed.

The home in which children’s author May Gibbs creat­ed the bush fairy tales of Snugglepot and Cuddlepie has now been recog­nised. Nut­cote Cot­­t­age, Gibbs’ former studio on Sydney’s North Shore, is one of the first build­ings in NSW to display a blue plaque model­led on London’s programme, and funded through Heritage NSW.

Blue plaques are also available to owners of sites listed in the Vic­t­orian Heritage Register. In 1999 the Mechanics Institute of Victoria Historical Plaques Programme planned to publicise the history of  these Instit­utes across Victoria. The original Mec­han­ics Instit­ute was built in 1842 in Melbourne. The Ath­enaeum Build­ing, with the statue of Athena on the parapet, was completed in 1886 to a design by arch­it­ects Smith & Johnson, and is registered by the Heritage Council. Werribee Railway Station was complet­ed in 1857 as part of the Geelong Melbourne Railway, Austral­ia’s first country rail­way. It has ret­ained its orig­in­al walls, platform and cellar, and is registered. The Colonial Bank of Australasia building in Kilmore, later the Court House Hotel, is also easily identified now. 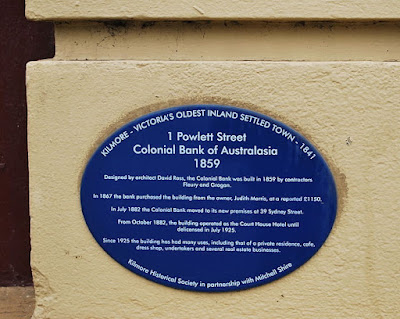 The Colonial Bank of Australasia building
Kilmore, Victoria
Contains far more history than the London plaques
Many thanks to English Heritage.
Posted by Hels at 6.12.22

Caroline Chisolm was NSW's first person to deserve and get a Blue Plaque. It went onto her East Maitland Cottage, dating back to the 1840s.

Agreed. Caroline Chisholm was a pioneering humanitarian who fought to improve conditions for immigrants. Until you mentioned her, I had no idea that Chisholm converted the cottage into an important immigrant hostel.

I might mention two more deserving NSW Blue Plaques - the author and illustrator May Gibbs, and the children's author Ethel Turner.

The New South Wales government has been accused of politicising history after announcing the first 17 successful public applications for the state’s new blue plaque scheme. The $5m program has been modelled on a similar scheme in the UK for more than a century to remember notable people and places.

It will see circular blue plaques placed on buildings where historical figures lived or worked, or where major events occurred. Sydney artist Brett Whiteley and Indigenous activist Charles Perkins were among the initial figures to be recognised from more than 700 nominations by members of the public across NSW.

But none of the 17 plaque locations, revealed on Monday by the NSW heritage minister were in Labor-held electorates.

I'd like to see a state scheme here rather than the ad hoc system currently in use. There are so many buildings deserving blue plaques. I was thinking the other day as we passed by the Beaconsfield Parade house of Madam Brussels that it should have a plaque.

This is a great idea. I live in a house over 100-year-old as well. I do wonder the history of the house I reside in.

I don't think Labor electorates were deliberately ignored, but I do believe the "type" of individuals awarded affected the location of their family homes. So if the awardees were largely supreme court judges and leading bankers, they would have lived in very different locations from awardees who had been Olympic boxers, AFL footballers or union leaders.

Unless the Heritage Register did its own very careful analyses, the blue plaque system does sound a bit ad hoc, doesn't it?

oh I agree with you totally. It is like finding all the vital information about your grandparents - you have to do a lot of research.

If you find your home used to be nasty brothel and drug centre, just give it a good wash and a new name :) But if you find your home was the site of an important family or vital event, perhaps apply for a blue plaque yourself. Then prepare for tourists and school groups standing in front of the front gate, taking photos :)

Italian-born Thomas Fiaschi (1853 – 1927) graduated with the degrees in medicine and surgery in Florence. He moved to Sydney at 22 and became honorary surgeon to the Governor General, and later consultant surgeon in Sydney Hospital. With the Great War, Dr Fiaschi went to England as commanding officer of Australian General Hospital. His efforts for Australia were innovative and untiring, thoroughly deserving his blue plaque.

I agree with you, even though I didn't know about your man before today.

Dr Thomas Fiaschi's experiences and learning as a war surgeon were well documented in the academic journals and lectures. His innovations rightly earned him a knighthood from King Umberto. Returning to Australia in late 1917, he joined the Army Medical Corp Reserve and retired in 1921 as Honorary Brigadier General.

thank you. Are you familiar with this sort of programme in your own country or any neighbouring countries?

So glad Australia has adopted this scheme. It's surprisingly interesting to notice who lived where, isn't it? (Often they live in rather improbable places, in my experience) Although I live not far from Eyre Court, I have never seen Kokoschka's plaque. (and I would not have expected him to live there, in fact). I was thrilled to walk past a plaque the other day to David Devant. I wish I had had the chance to see some of these famous stage magicians of the past. And I was very surprised to see a plaque to JOhn Betjeman in Cloth Court, a tiny ancient little alley near Charterhouse. It didn't seem quite his style at all - I'd have thought he'd have chosen somewhere Victorian and in-your-face to live.

it is such fun, yes. I loved the blue plaques I saw when we lived in the UK, and if someone seemed very interesting, I did a whole lot of follow-up research after. For example I had known a lot about Kokoschka's art, but hadn't remembered his years living in Britain.
https://melbourneblogger.blogspot.com/2019/07/alma-schindler-mahler-musical-talent.html

Hopefully the blue plaques will be as exciting and useful in Australia.

I work just off Bridge Road in Richmond and love all the plaques on the shops that give an idea of history . Makes a walk along Bridge Road a real treat .

Agreed. Spouse and I play a game every time we see a Blue Plaque: who knows the right answer to "the type of architecture", "the decade and purpose of the building" and "who might the architect have been"? As you say, the plaques give a wonderful sense of history to buildings we have seen for yonks.