Murano near Venice - a tourist's dream. 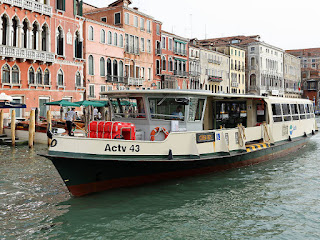 Vaporetto
Murano Glass
Murano consists of 7 individual islands in a lagoon north of Venice, linked together by beautiful bridges. Travel to Murano from Ven­ice by public vapor­etto, then walk the island canals and visit the beautiful build­ings on each side of the Grand Canal on foot. Have lunch outside any restaurant that is facing the Canal.
Let’s start at the start. Murano made its living from fishing and salt. In the Roman Empire moulded glass was made in Venice, the indus­try blending Roman experience with skills learned from the Byz­ant­ine Empire and trade with the Or­ient. Thus Venice was emerging as a glass-manufacturing centre as early as the C8th.

Initially a church devoted to the Virgin Mary was built in the C7th then rebuilt tw­ice. Apparently Emp­eror Otto I’s ship was caught by a strong Adriatic storm so he vowed to build a church dedic­at­ed to the Virgin. The st­orm stopped, and Otto saw an apparition that directed him to Murano. He built a church con­sec­rated in 957 and the slim cam­p­­anile/bell tower that stood apart. Both the church and the camp­anile were built of unplastered dark-brown-red brick. 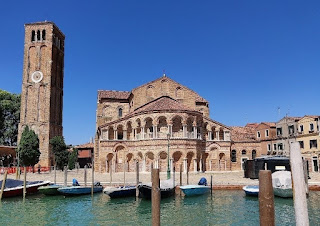 Santa Maria and San Donato Cathedral
Trip Advisor
Note a beautiful square sur­rounded by smaller historical buildings. Note the eastern fac­ade, which faced a canal, was de­­corated with special colon­n­ades to cr­eate a magnificent first imp­res­sion. But why was it called St Donato, a man who did not have any conn­ection to the Venetian lagoon. Ven­etians used to buy important relics and bring them home from their travels, to earn authority in intern­at­­ion­al rel­at­ions and tourism. The relics of St Donato, and the huge bones said to belong to the dragon slain by St Donato, were brought to Murano in 1125. Fights between the St Ma­r­ia and St Stefano par­ish­es were har­sh, lasting until 1125 when Doge Domenico Michele streng­th­ened the Santa Maria church by storing St Donato’s rel­ics in a mar­ble sarcophagus. Since then, the church was devoted to St Don­ato! To celebrate, a col­our­­ful stone mosaic floor in Byzantine style was made in c1140. The is­land only has 3 working churches now.

When did the Glassmakers’ Guild become important on the island? The Guild laid out craft­smen’s rules, to safe­guard the trade secrets and en­s­ure the in­dustry’s profits, and a 1271 law prohib­it­ed the imp­ort of foreign glass or employment of foreign workers. A tougher law was passed in 1291, requiring all glassmaking furnaces be moved to Murano, to avoid fire spreading over Venice’s dense wooden structures.

Because of Venice’s location at the cultural bridge between Eastern and Western trade, the city’s glass peaked in popul­ar­ity in the C15th-C16th. The popularity of Chinese porcelain among Eur­opean nob­ility fuel­led a white-glass-mimicking-porcelain industry. Moneyed families starte­d to create palaces for themselves. Examine eg Pal­azzo da Mula, a medieval palace featuring the gothic façade and Byz­ant­ine déco­r­ation that was so popular in Venetian architecture. In the C16th the noble Mula fam­ily rebuilt the original build­ing to a large extent. It is still a very imp­ressive municip­al registry office today. 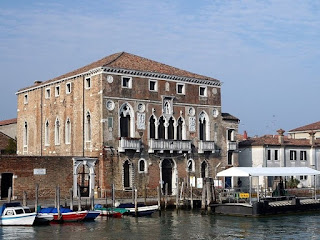 Palazzo da Mula
Wiki
Another patrician palace in typical gothic style became the Palace of the Bishops of Torcello in 1659, just as reb­uilding was being car­ried out based on plans by architect Antonio Gasp­ari. When in 1805 Torcel­lo Diocese was abolished, the palace pas­s­ed to the Venice Patriarchate then sold to the Murano Mun­icipality to become the townhall. When the museum and archives were established in 1861, they were both housed on the 1st floor. But the steady growth of the collection made it necess­ary to find more space and so grad­ual­ly the museum occupied the whole palace.
After the autonomous Murano Municipality was abol­ished in 1923 and annexed to Venice, the building became part of the Venice Civic Mu­seums. Visit the Murano Museum of Glass which was ren­ov­ated in 2016, although the exterior has rem­ained true to the original.

Ven­et­ian power on the trade routes reduced and new craft centres em­erged in Bohemia and Fr­ance instead. But while Murano glass might have entered a gradual decline in the C17th, this was also an era of baroque taste that spread via European architecture, painting and int­erior de­c­­oration. At least royal courts continued to order glass­ware.

But in the C18th the political climate worsened. The industry suffered with Napol­eon’s con­quest of Venice in 1797 and his abolition of Ven­ice’s guilds. In 1814, the transfer of Venice from France to the Hab­s­burg Em­pire created anot­h­er crisis for Mur­ano’s economy; Habs­burg rul­ers pre­ferred their own art centres in Bohemia so they passed laws mak­ing it ex­pensive to bring neces­sary raw materials into Murano. 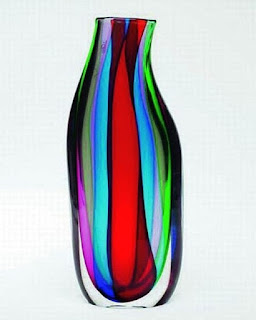 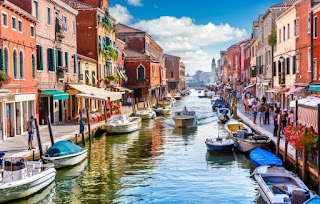 Coloured houses along the canal
Italia.It
Many residents on Murano painted their houses in bright neon hues. The homeowners said that the tradition of brightly coloured homes stemmed from the island's origins as a fishing village i.e they used vibrant colours so they could find their way home in the dark and the fog. This made sense since Murano didn’t have the mega-wealthy class of the glory days of Venice. Nonetheless the same bright houses on the canals these days are largely to draw tourists.

Hi Hels - I've never been to Venice ... and doubt now I'll get there. But the history is also something I've not investigated much ... Marco Polo and those early trade routes ... the glass History must be fascinating - I've always loved seeing glass creations. I need to spend more time here - but another day - thanks for posting - cheers Hilary

Spouse and I spent some wonderful days in Venice and its islands years ago, and loved every moment. But we already knew the danger that Venice faced, and were warned that intense tourism would only damage the city faster. So it is a dilemma. Encourage tourism and increase the pleasure and knowledge, or discourage tourism and slow the rate of destruction down.

Would you include the island of Burano in the same day trip? The brightly painted houses are similar on both islands.

many thanks for reading the post, but I don't accept advertising. So I would love to use your expertise while you are thinking of Venice in general or Murano in particular. What are the best books a tourist should read, before leaving Australia etc for Venice. My readers are interested in history, but are largely not professional historians.

easily done in the same trip, yes. Burano has even more beautifully painted houses, a joy to examine and to photograph.

But even more famous is Burano's lace making. Burano lace-making art became popular early in the Renaissance and became world famous as the centuries rolled on. The Lace Museum at the palace of Podestà of Torcello is fun to visit.

Resembling a mini Venice with its waterways and canals, Murano consists of seven islands that are connected by bridges. Like Venice, Murano is best explored on foot, without a set itinerary.

thank you for a great link. I hope would-be travellers read your posts closely.

We spent a wonderful day in Murano many years ago as a day-trip from Venice. I can't remember if we went to Burano or not. We were lucky enough to watch a very-highly-skilled glass-blower at work.
It's interesting to note that Protectionism has been around since at lest, the thirteenth century!
CLICK HERE for Bazza’s powerfully pervasive Blog ‘To Discover Ice’
PS: She-who-must-be-obeyed has just informed me that we DID go to Burano.

Hi Hels, lucky you for spending some time in Venice! Venice and its islands are so interesting, historically and visually. Mr P. & I make romantic noises about having a Xmas in Venice one year - we've never been there together and my only visit was a lifetime ago and just for a night - but it may never happen in reality. As for Murano, while having never squeezed it in on my whistle-stop, we do happen to have a fabulous pair of vintage Barovier & Toso bedside lamps, so Murano does touch our lives every day!

ahhh my friend, we will have to get you travelling :) And Venice would be an excellent place to start. As I am typing this comment, I am watching a programme on TV called "Saving Venice" ... from climate change. It is both sad and hopeful.

re protectionism I am not surprised. When a city had a treasured industry or two, there was a powerful motivation to save their secrets and their economy. But this could have backfired since Venice was the main Mediterranean port in both directions.

Accidentally or otherwise, I imagine that Venice and the islands depend instead on HUGE rates of tourism.

if your Barovier & Toso bedside lamps photograph well, send me a photo and I will add it to the blog. I haven't been to Venice in 20 years and would love some visual memories.

thanks for reading the post. Are you interested in any element of Venetian life in particular - eg architecture? music? paintings?

We thoroughly enjoyed our day trip to Murano and Burano when we were in Venice. We learned all about the glass- and lace-making on both islands and took a million photos of the pretty houses. I'd love to return but as you say, over tourism is destroying places like Venice and Barcelona.

I loved Barcelona, but I had no idea that nowadays it is a city threatened by climate change, rising temperatures, decreased drinking water, increased flooding and shrinking beaches. Of course climate change is taking its toll all over the world, but Venice and Barcelona were/are two of the most beautiful cities on the planet.

Thank you! You must get yourself to Venice and Murano, before more damage is done to these beautiful tourist sites.