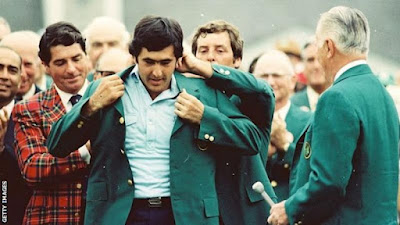 First European to win the Masters in 1980 and
the youngest player (23) to claim a Green Jacket then
Severiano Ballesteros (1957-2011) was born in the small fisher­man’s vil­l­age in northern Spain, an area with a golfing tradition. One of four brothers who became professional golfers, Seve learn­ed to play golf using a 3 iron from his brother Manuel, and practised locally. He clearly had an impress­ive natural talent and determination.

At 12 Seve played 18 holes and won the event scoring 79. Most of his early golf was play­ed on the beach and when he climbed over the Ped­reña wall to play at night, his pro­gress was rapid. He was a precocious talent, turning pro­fess­ional in Mar 1974 on his 17th birth­day. Clearly he expect­ed to win in 1974, but finished only 20th in his first pro event, the Spanish Professionals Champion­ship.
The 1976 Open Championship he finished second to Johnny Mil­ler and Jack Nicklaus, thus introd­ucing him­self to the rest of the golf wor­ld; he was extremely handsome, and he created clever golf-shots. And he won the Order of Merit in Eur­ope with vict­or­ies at the Dutch Open and Golf Trophy Lancome, catching up with Arn­old Palmer. He also won the World Cup of Golf team event with Manuel Piñero for Spain. In 1977 he again won the European Order of Merit and in 1978 his wins in USA, Kenya and Jap­an made him an international star; 6 consecutive tournaments in four continents. But serious back pain was emerging. 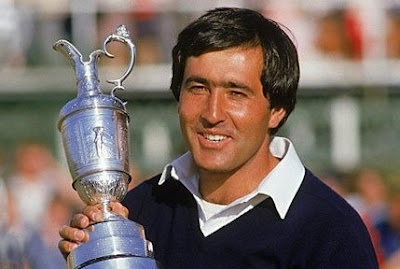 British Open at St. Andrews, 1984
handsome winner
Then he won his first Under-25 Spanish Championship in Pedreña. His career achieve­ments included 93 tourna­ment victories including 5 Majors; The Open Champ­ion­ship in 1979, 1984 and 1988; the first Masters Tournament 1980 and the second in 1983. He won five World Match-Plays, two World Cups and played in nine Ryder Cups Matches.

Because of Seve, The Ryder Cup changed from a USA Vs a British and Ir­ish ev­ent, to a USA Vs a Continental European ev­ent. In 1979 Seve and Ant­on­io Gar­r­ido were the first continental pl­ay­ers allowed into the team! He repr­esent­ed Europe in 9 Ryder Cups! In 1987 the Europ­eans beat the Americans at home, Capt Tony Jacklin pairing Seve with José María Olazabal, marking Europe’s first victory in that event. His other victor­ies were in 3 British Open wins between 1979-88.

Seve revealed he would be captaining Europe in the 1997 Ryder Cup at Vald­errama, real­is­ing one of his dreams when this Cup was held for the first time in Spain. He gave a fascinating view of a sp­ortsman oper­at­ing at a heroic level, but he was actually strugg­l­ing with fail­ing health and expressing his volatile temper loudly. He hated the American media's portrayal of him as some rural, snotty Spaniard.

Of the 5 Majors he won, the first was the 1979 Open Championship, the youngest winner till then. Seve astounded the golfing world in 1980 by leading the Masters Tournament, making 23 birdies and 1 eagle. He was the first European to win the coveted Green Jac­k­­­et! In 1983 Seve captured his second Masters title with an amaz­ing last round. And when the 1984 Open Championship was held at St Andrews, Seve won on the last hole! But the anger continued. 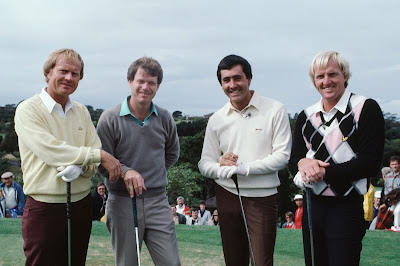 Carmen and Seve married in 1988 and had 3 children, Javier Baldomero, Miguel and Carmen Jnr. The couple later split up due to Seve's ongoing erratic behaviour.

Throughout his career many important awards were given to him. Ballesteros was elected to the World Golf Hall of Fame in 1999, and in 2000 he was named European Player of the Cent­ury; he became Spanish Athlete of the Cen­t­ury in 2000 and BBC Sports Personality of 2009. 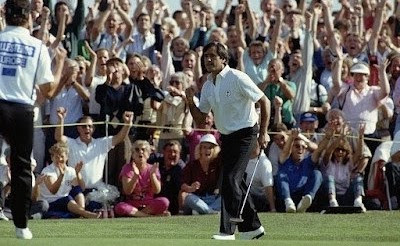 The huge European crowds were on Seve's side

Back pain excluded him from play over several years, and in 2007 he made his retire­ment official after The Open Championship. In Oct 2008 he was treated for brain cancer, dying in 2011 aged 53.
Conclusion
Seve who was one of the sport’s most prominent figures in the 1970s and ’80s. He was known for his flam­boyant style of play and accum­ulated 85+ wins in international golf tourna­ments. Seve’s children are now in charge of his legacy. The Royal &Ancient St Andrews is celeb­rat­ing the life of the great golfer with a trio of unique tributes, 10 years after his passing. It incl­udes a feature-length documentary, publication of a great photobook by sports photo­­grapher David Cannon and the British Golf Museum in St Andrews.
Written by Dr Joe, a golf tragic
Posted by Hels at 19.9.22

Joe
Seve was young, handsome and energetic. This seemed more important in the 70s and 80s than the golfing authorities totally approving of him.

Seve set up the Foundation in 2009, with the commitment to contribute to the advancement of science for the benefit of those suffering from brain tumours.

The Foundation also aims to introduce young children to play golf, to use the game as a vehicle for social development, instilling the values associated to the practice of sport inherent in the founder: humility, effort, perseverance, resilient spirit, determination, integrity, tolerance and respect.

Hi Hels and Joe - I know little about him ... but he seemed to be appreciated by the golfing fraternity ... cheers Hilary

Another golf tragic, Ballesteros may well have been one of the best players in the world, but he was adored for never having his spirit trampled by the respectable golfing authorities. The Guardian put it well: along with Muhammad Ali, Seve had character to equal his talent. It may have been difficult actually to live with them both, but it was impossible not to be a fan.

I had no idea that my reading "Seve: The People's Champion" both celebrated the life of the special golfer and supported the Seve Ballesteros Foundation. I hope you do really well with both your stated goals.

Hilary Last Sunday at golf I asked the 12 men in my group, who all started playing golf by 1975, which golfer they most admired. Five of them answered: Seve Ballesteros :)

I have little interest in sport but it was rather interesting to read about Seve B.

Joe, it is interesting that your companions knew and admired him. For me, I remembered his name and that he was a golfer, but nothing else.

His untimely death of brain tumor - was a tragic loss to the golf world.
Seve Ballesteros looked indeed, very handsome (judging by the picture), and had great talent. Hopefully, his memory and the admiration for him will stay forever through the noble deeds of the Ballesteros Foundation!

Andrew. When I moved from Sydney to Melbourne in 1970, I was not a sports fanatic at all. But the other men welcomed me into their golf club and introduced me to dozens of contemporaries. It was a social life saver.

I still cannot play football, but I learned to barrack for Melbourne Demons like a local.

DUTA Becoming so ill early in life was terrible for a world class sportsman, and a father of three. I see sick and dying people all the time at work, but Seve Ballesteros' last years struck me almost personally. From retirement in 2007, to being diagnosed with a malignant brain tumour in 2008, to dying in 2011, we watched the great talent disintegrate.

The Foundation has a very important role.

The British Golf Museum in St Andrews was great for golfing fans to examine, but it was closed last time (covid? renovations?) I was there. Welcome home, Seve.

Train Man The British Golf Museum operated successfully for a long time. Now called the R & A World Golf Museum, it closed in early 2020 so that the museum’s galleries could be renovated and re-displayed.

I too have not yet seen the exhibition celebrating "Seve – His Life Through the Lens". But the reviews have been impressive.

I am not a follower of golf but if asked to name any golfers his name would be the first to leave my lips.

Fun60 Depending on my golfing colleagues' age and nationality, it seems that the Europeans were really very attracted to Seve Ballesteros' talent and personality. All his tournament wins made a huge mark on the European golfing world, but probably the Ryder Cups were the most significant.

The pressure on professional sports people is so often more then the demands of the sport. It's about fame and an international lifestyle too....

Isn't that the sad truth. I saw in the news this morning that some First Nation footballers were taken away from their partners and babies, so that they could concentrate on their football. The young men could have said no, I suppose, but then they wouldn't have been selected in their team each weekend.

Untold pressure comes in all sorts of ways :(