Helen Duncan, found guilty of witchcraft in 1944 !! and not yet pardoned in UK. 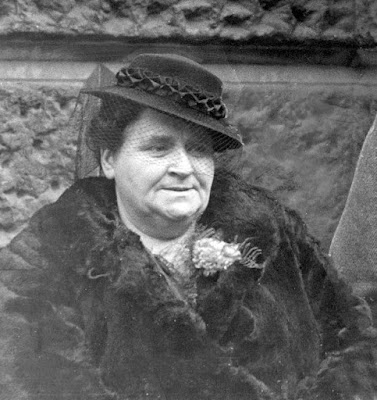 Helen Duncan
BirminghamLive
The last English execution for witchcr­aft was 1684. James I's st­atute was repealed in 1736 by George II. The Scottish church out­lawed witchcraft in 1563; by the time of the last execution in 1722, 1,500 Scottish witches had been put to death. Parliament pass­ed the 1736 Witchcraft Act repealing the old laws against witch­craft but im­posing fines or gaol on people who claim­ed to use magical powers to predict the future. Prison yes, but thank goodness Britain could end witchcraft tortures & executions.

So who was Helen MacFarlane Duncan (1897-1956) and why was she a witch? She moved to Dundee and worked at the Royal Infirmary where she met Henry Duncan, a wounded WW1 soldier, married in 1916 and had 6 babies. By Ap 1941, at the height of the war with Germany, the Duncans had sons in the navy, RAF and army.

When she was not working in her factory job, Duncan was offering séances. In Nov 1941, right in the middle of WW2, she held a séance in Ports­mouth at which she claimed the spirit of a dead sailor told her the HMS Barham had been sunk. True.. the Barham had indeed sunk, torpedoed by the German U-boat U331 off the Egyptian coast that month.

Official death notices were sent out to families of the 861 sailors, asking them to keep silent until the official announ­ce­ment appeared in late Jan 1942. But The Times carried news of the disaster; Duncan simply read the news and incorporated it into her séance.

Duncan was investigated from the time of the Portsmouth seance (Nov 1941) until Jan 1944 when she was arrested. She was first char­g­ed under the Vagrancy Act 1824, under which fortune-telling was norm­ally prosecuted then. Yet the Crown sent Duncan to be tried the Old Bailey for contravening the Witch­craft Act 1735, which carried prison sentences. Clearly the authorities reg­arded this case as threatening the war effort; that Act had not been used for more than a century. 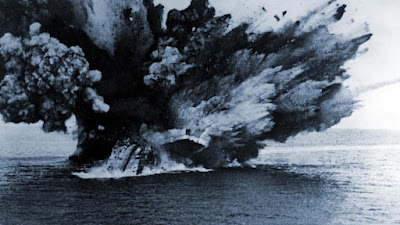 HMS Barham torpedoed 1941
but when was the newspaper article published?
Witchcraft??? Did the prosecution really believe this middle aged, ov­er­weight Scot­tish factory worker had classified war intelligence which she could reveal? Presumably the timing of her Jan 1944 arrest was crit­ical since Britain was secretly pre­par­ing for the D-day land­ings then, more vital than Duncan’s harm­less entertainment. Officials were paranoid that she may have revealed the date and location of the landings, leading to a crisis in the security services or to soldiers defecting.
Portsmouth’s Chief of Police gave a speech which sent her to prison for 9 months. “This is a case where not only has she at­tempted and succeeded in deluding confirmed believers in Spirit­ual­ism, but she has tricked, defrauded and preyed upon the minds of a credul­ous sec­t­ion of the public who have gone to these meet­ings in search of comfort of mind in their sorrow and grief. I can only describe this woman as an unmitigated humbug who can only be regarded as a pest to a certain section of society.” Humbug perhaps, but a witch?

After a 7-day trial, the jury voted guilty on Charge #1, then the judge discharged them from the other verdicts. Duncan was gaoled for 9 months at Hol­l­oway women's prison in north London, a very over­weight, diabetic, middle aged woman who received in­adequate medical care in gaol. On her release in 1945, Duncan promised to cease her games. She was even denied the right to appeal to the House of Lords, living quietly until she died in her Edinburgh home in 1956.

Nor was she the last person convicted under the 1753 Act. In 1944 an elderly woman Jane Yorke from East London was charged under the same act with pretending to conjure up spirits of the dead. [Thankfully Yorke was bound over for £5 to be of good behaviour for 3 years].

Prime minister Winston Churchill rightly denounced Duncan’s con­vic­tion as rid­ic­ulous, repealed the 1735 Act and replaced it with the Frau­d­ulent Mediums Act of 1951. But her conviction was never quash­ed. Nor did the Home Secretary ever explain why Duncan was charged under the Witch­craft Act, rather than on a breach of the State Secrets Act.
**
Decades after Helen Dun­can's death, a campaign was launched with a petition calling on the Home Secretary to grant Duncan a posthumous pard­on. In the request for a pardon, they said she was tried under an old piece of legislation that shouldn’t have been used at the time. Furthermore advice had been issued by the Director of Pub­lic Prosecutions that alternatives had been available.

But here is what the Home Office wrote in refusing a petition for a free pardon: “It is extreme­ly rare for the Home Secretary to use his power to recommend a posthumous Free Pardon. In modern times, only one such Pardon has been recommended. It would also be particul­arly diffic­ult to apply current knowledge, morality and other criter­ia to events, which took place c50 years ago. In 2008, the pardon was refused. I presume from Duncan’s web page that the appeals will continue.

Did the military authorities really think that mediums and fortune tellers had the ability to predict the future? Even the most stupid admiral would know that seances were just a way for a poor woman to make some money at fairs .

Good grief . i bet they were trying to shut her up without mentioning the war so paranoid were they of let the D day landings out of the bag that they couldn't use the official secrets act for fear of doing it themselves . Bizarre

Why is the Home Office still supporting witchcraft charges today?

It makes me laugh to think about older, experienced admirals making important war time decisions via tea leaves, tarot card reading, palmistry or head bumps. Even if the authorities were worried about a crisis in security services or community anxiety, seeing the issue as witchcraft was never ever realistic.

Clearly the authorities really DID reg­ard this case as threatening the war effort. But imagine, in an ordinary court, suing a middle aged, working class woman for running dodgy seances in Ports­mouth. The witnesses would have said "she charged money for the readings and promised I would meet Mr Right, but I am still single. The witch defrauded me."

I wonder if the Home Office is too embarrassed to redress the horrible court case in 1944, or they don't have the ability to substitute another crime that Helen Duncan might have been guilty of. I wonder what the Director of Pub­lic Prosecutions had recommended?

Oddly it seems like the authorities believed she could tell the future or know things unknown to mere mortals. It's a very strange business and if she was charged under the Official Secrets Act, I would assume that would be unreported by media, surely preferable.

Was it the case in our younger years that here, it was illegal to tell fortunes? I remember being told this.

Even though I find this incredible, you are correct! Criminal Law says that after the turn of the 21st century, most Australian jurisdictions took steps to repeal laws that specifically outlawed fortune-telling because the cases could be addressed under fraud legislation. Duh!

However "fortune telling with intent to deceive" is still a separate offence under the Summary Offences Act in some states where it is an offence to tell fortunes by palmistry or other means to deceive. A person found guilty of this offence faces a financial penalty or imprisonment, or both.

Now I find this ridiculous. But at least we are not charging fortune tellers with medieval witchcraft legislation.

An incredible story. I can only think emotions were heightened because of the constant threat from the enemy. (I often think we underestimate the stress many people are under during war conditions. Not that this really excuses it. )

National paranoia and individual anxiety during war time builds up to a terrible level, as all our parents remembered so clearly. I too would have taken every known precaution, to keep the citizens protected, and the enemy in the dark. But if the authorities really did believe a fortune teller might risk the nation's safety, they should have charged her under The Official Secrets Acts.

I assume they chose the Witchcraft Act of 1736 because a] aiding the enemy would have been too hard to prove and because b] the authorities wanted all citizens to be warned about inappropriate behaviour in war time.

Churchill was right. The conviction of the woman was ridiculous, tragically ridiculous, I would say. I wouldn't mind at all ,however, if fortune- telling gets banned.

Churchill was totally correct *nod*. It was an obscenity to burn tens of thousands of (mainly) women on a bonfire because gossip and spectral evidence were accepted by the judges as proof of witchcraft! Thankfully the 1736 Witchcraft Act repealed the old execution laws against witch­es, but alas gaol was still a perfectly acceptable punishment to be handed out by the courts.

The Fraudulent Mediums Act 1951 prohibited a person from claiming to be a psychic while attempting to make money from the deception, other than solely for entertainment. While I think people who go to psychics for advice are a bit dim-witted, I still think that fortune telling should not be banned.

I also didn't know about the WW2 witchcraft trial, until the first pardon was refused in 2008. Clearly there are still countries where witchcraft is illegal and punishable by harsh sentences, but how embarrassing for modern British justice.

Hi Hels - so much misinterpretation, lack of compassion ... We are in better times ... not always granted and women tend to get the worst of it. All the best - Hilary

of course you are correct, but I had actually hoped that the modern world would have totally left the societal norms of medieval Christian Europe behind. Thankfully most Christians have certainly moved beyond Witches' Hammer, the hugely popular book that described how to convict and kill (mainly women) witches.

Thanks for the explanation of our laws.