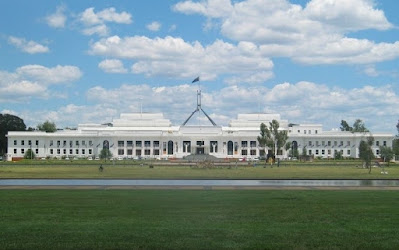 Old Parliament House, Canberra
The need for a national capital city arose when the col­onies united to form the Commonwealth of Australia in 1901. The new Australian capital city of Can­berra would soon grow, but Parl­iament couldn’t relocate from Melbourne until the pro­visional building in Can­berra was ready.

Parliament House was designed by Murdoch and a team of assist­ants from the Department of Works and Railways. The building was never int­ended to be permanent or elaborate; it was to be a provisional building that would serve Parliament for 50 years max. It would be a classical building like the Parthenon, but with­out all the ornate details. And it was to look out over Lake Burley Griffin.

Murdoch designed both the exterior of the building and the int­er­iors. He had to integrate all the spaces required of a parliament including: chambers, King’s Hall, party rooms, library, offices, members’ dining rooms and kit­chens. And he designed a distinctive set of furniture that shared the architecture’s design language.

So Murdoch’s provisional parliament building was to be modest, funct­ional and impermanent. It was designed on a basic square which provided the building with regular pro­p­or­t­ions. It was a 3-storey brick building with the principal floor on the middle level, and the funct­ional aspect was reflected in all the des­ign.

The faç­ade orig­inally included a grid of recessed openings and bal­con­ies, with four bays having arched bronze windows and stepped pa­r­apets. The façade had strong horizontal lines, display­ing only two storeys, with massed elements behind the faç­ade indicat­ing the loc­ation of the debating chambers. The lower mass in the centre was where King’s Hall was. As a result, with its now enclosed verandas and colonnades, the building was not what some Australians expected from a proper Par­liament House.

It did not include such cl­assical arch­itectural elements like col­umns or pedim­ents, but did have the necessary sym­metry. In the end, he had designed what is now considered a significant, nation­ally-listed heritage building with a fine sense of classical simp­licity, order and proportion. 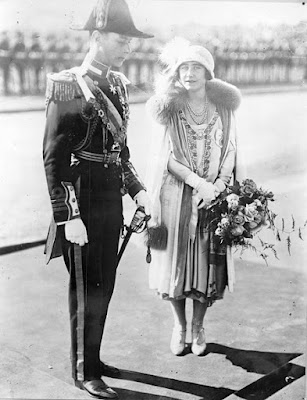 The Duke and Duchess of York
opened Parliament in 1917
The building was in the Simplified or Strip­ped Classical Style, commonly used for Can­b­erra’s government build­ings built in the 1920s-1930s, and also recognisable in Murdoch’s other Can­ber­ra buildings eg the Hot­el Canberra/now Hyatt Hotel Canberra and Hotel Kurrajong. It was opened by the Duke and Duchess of York at the opening in May 1927.
When politicians arrived in Canberra for the opening of Provis­ion­al Parliament House in 1927, they saw bare ground and a low hedge, planted by the Superintendent of Parks and Gardens. The bush land­scape stood in stark contrast to the established lush gardens of the temporary Parliament in Melbour­ne. So from 1931-8, the Secret­ary of the Joint House Department started creating gardens to the east and west of Canberra’s Old Parliament House.

Old Parliament House's sig­nif­icance today lies in its hist­or­ic­al and social value to the nation. Now it is an important museum of Aust­ralia’s pol­itical heritage. Old Parl­iament House is open daily, for a guided tour or a self-tour where it’s possible to vis­it nearly all areas of the Old Parliament.
On the guided tour, see:
King's Hall,
House of Representatives Chamber,
Corridors of Power,
Ministerial Party Room,
Prime Ministers Office,
Cabinet Room,
National Portrait Gallery,
Senate Chamber,
Suite of the President of the Senate,
Senate Club Room,
House Gallery and
Strangers Gallery. 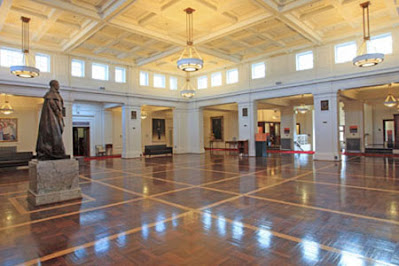 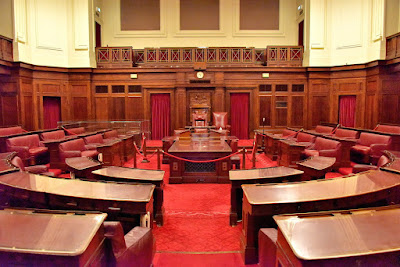 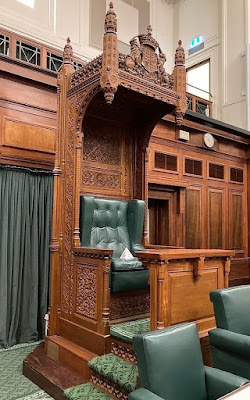 Speaker's chair, oak, House of Representatives
Old Parliament House Canberra was the seat of the Parliament of Australia from 1927-88 . In the 61 years that the building served, there were changes in the size and nature of the Federal Parliam­ent eg in this time the House of Representatives grew from 76 to 148 members and the Senate from 36 to 76 members. In 1927, only the Speaker of the House, President of the Senate, Prime Minister, Leader of the Gov­ernment in the Senate and ministers had their own offices. Mean­while great changes were taking took place in Australian social and pol­itical life, and democracy matured.
During its life as a working parliament, the building was the set­ting for many of Australia’s major political events. Debates that influenced the future of the nation took place here, key decisions were taken, pol­itical careers were made and ended. But by the 1980s the building had exceeded its capacity with 3000 people crowded in­to a building originally intended for a few hun­dred. Members and senators had tiny and overcrowded offices.

In June 1988, members sat for the last time after 61 years in the old building, just as Parliament moved to the New Par­l­iament House on Capital Hill. Then Old Parliament House became home to The Nat­ional Por­trait Gallery which holds a variety of changing exhibit­ions. And it serves as a venue for temporary exhibitions, lectures and con­certs. In May 2008 King’s Hall became the Museum of Austral­ian Democracy. The museum tells the herit­age of the building and the story of Australia’s democracy.

Located on either side of Old Parliament House are the House of Representatives Garden and Senate Garden. The roses in this garden were planted during the Great Depression, and when Parliament mov­ed, the old gardens were restored to their former glory and opened to the public. New features included seating pavilions, pergolas, rose arbours, gateways and refurbished tennis courts. 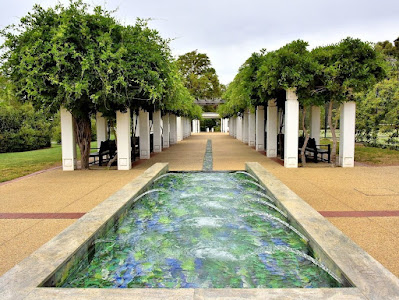 The old gardens have been restored and new facilities opened 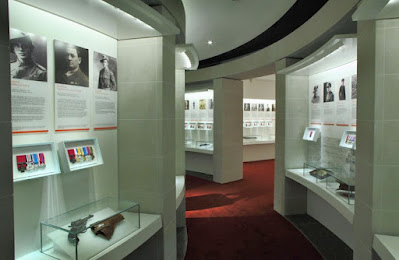 The Hall of Valour recognises the heroic deeds of ordinary Australians in war.
Photo credits: Mildenhall images of Old Parliament House
Posted by Hels at 16.8.22

One of our children went on an organised school excursion to see Old Parliament House. They knew nothing about Federation or the history of the Government in Canberra, and loved pretending to be politicians.

A carved oak Speaker’s Chair was apparently a copy of the Speaker’s Chair by Pugin in the British House of Commons. Maybe the carved canopy with a pierced gallery and four carved pillars was a bit over the top for Australians.

quite right. I asked my grandchildren which states wanted to Federate and which did not; how was New Zealand involved; when did Federation formally occur; and why was the first Parliament in Melbourne and not Canberra. But none of them knew any of the answers :(
The school excursion would be a great idea.

the Speaker's Chair was very elaborate, agreed. I shall find a photo and add it into the post. Many thanks.

I really enjoyed a visit to this building a few years ago . The things that stick in my mind were not the showy bits but the modesty of the prime ministers suite and particularly the bathroom and also the tiny space allocated to the press . They had a space not much bigger than my family room and the broadcast booth wasn't much bigger than a cupboard . It must have been very difficult to keep any secrets in this confined building and I am not surprised that many "old timers" remember this building with affection as having been much more intimate and facilitating cross party friendships in a way that we yearn for now .

the earliest politicians in Federal Parliament were not royal or noble, and wanted to behave in their private spaces like sensible Australians (although the public spaces were more elegant). But by the 1970s, the space was clearly inadequate for the extra Ministers and their extra staff in the building. Thankfully the new offices and new furniture must have been much nicer than the earliest versions.

The suite now is as it was for the greatest Prime Minister of all time, Gough Whitlam 1972-5 :)

Hi Hels - it must be interesting to look round and to see the history associated with it ... the wood looks superb. I'm glad they've turned it into a museum/public space and restored the gardens ... I'd love to visit ... cheers Hilary

the problem is that when original buildings become too small or too old fashioned, they tend to be pulled down. Old Parliament House in Canberra was so important historically speaking for this young nation, it would be like pulling down St Martin-in-the-Fields in London or Les Invalides in Paris.

I hope you do get to Canberra one day... it is a very fine city.

I am for simplicity and functionality in architecture, though I also get impressed by columns, balconies, ornaments.
Sadly, politics and democracy are not what they used to be, so parliament houses leave me indifferent.
School children , nowadays, get a superficial education, so Heritage doesn't speak to them either.

In Westminster democracies, Parliaments and their structures are the only protection for the population against rampant presidential powers or worse. Styling these buildings in the neo-classical Greek fashion makes no difference to democracy, of course, but they remind people of the legacy of ancient Greece democracy.

You are quite right about school children :( They don't do national history, world history or geography anymore, and they are hardly exposed to world literature or languages.

I hope if international transport and full employment returns to normal one day, you will be able to visit us in Melbourne, Sydney and especially Canberra.

I’ve been there, though many years ago. I do remember the portrait gallery of former PMs. If I get a chance to visit Canberra again, I must have another visit to the Old Parliament House! My last visit to Canberra was a few years ago, to attend a science fiction convention, then I had to go home to get back to work, so no tourist stuff.

My entire family used to drive/train to Sydney every few months to visit the in-laws, but barely visited Canberra. How silly.. there were/are so many wonderful things to see in the Australian Federal Capital.

You are probably of the same generation as me... doing Australian and foreign history every year in primary school and most of high school, so you will love Old Parliament House (and other sites).

I liked the look of it and I think I'd enjoy looking around because I always appreciate a place that is designed with great care both inside and out. Portcullis House, built as part of Parliament in Westminster, is one such and was recently saved by a campaign to demolish it after a shockingly short space of time. It's a pleasure to be in it. The same can be said for the British Library, which you may know had a long (very long) and difficult birth and was eventually completed at a time when architecture had become very different from at the time it was designed. I don't know if you are familiar with either. The most interesting and perhaps the best known of the total design public buildings I have visited recently is the German Bundestag in Berlin. I can't recommend a visit there highly enough. It is full of interest and has a fascinating backstory. (I will now check to see if you have covered this already) :)

Australians always say that our heritage buildings are readily pulled down because our country is new and our history is short. If only we were like Britain, France, Germany, Italy Russia etc where the histories are old and treasured. Can you imagine the German Bundestag in Berlin being pulled down and a MacDonald's built on the site? Or the British Museum Library being replaced by several large petrol stations? There is a very good reason why Australians' favourite cities are Vienna, Florence, Paris, Berlin etc and not Atlanta GA

yes, the Old Parliamentary House in Canberra, built to be "modest, funct­ional and impermanent" is now a great museum, gallery and gardens.