During WW1 Richborough Camp was built on the River Stour, the start­ing point of a ferry service across the Channel for troops and munitions to Fran­ce and Bel­g­ium. A railway was built from the main line to the banks of the Stour, so thou­s­ands of soldiers could be transported. But by late 1918, this British Army camp was left derelict. 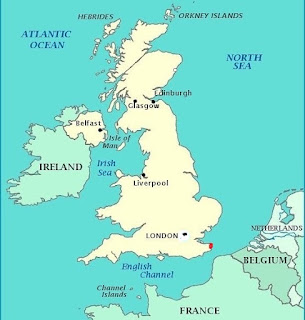 Location of Richborough/Kitchener Camp, Kent
across the Channel from France and Belgium
Richborough Camp and Port, Kent, in late 1918. So why was this camp rebuilt pre-WW2? By the late 1930s, the Council of German Jewry had been trying to or­ganise a safe haven for citizens, especially once they were swamped with requ­ests for help. In Krist­all­nacht Nov 1938, 25,000-30,000 Jewish men acr­oss Germ­any, Aus­tria and Sudentenland were arr­est­ed & confined in Buchen­wald, Dachau & Sachsenhausen concentration camps. They suf­f­­ered starvation and tort­ure, and hund­reds died in the brutal conditions.

Ironically, release from the German camps dep­ended on prison­ers prom­is­ing to LEAVE Germany asap! Ot­her countries refused to take more ref­ugees, so Kitchener Res­cue be­gan. Per­m­is­sion was given for the old camp to be rent­ed by the Council of Ger­man Jewry, to prov­ide a transit-camp refuge for Jewish working men. It was run by the Jewish aid organisations that organised the Kinder­trans­port.

Until they had a safe haven, the men had to report weekly to a German pol­ice st­ation; meanwhile they remained at risk of re-impris­on­ment and death. Thus the priority was to get these sons and husbands out of Germany urgently. 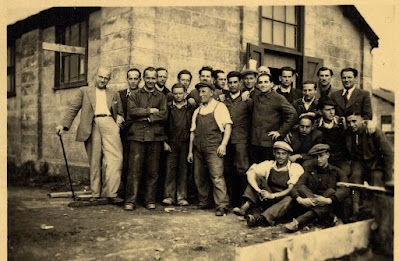 The first men to arrive in Kitchener in 1939 had to rebuild
the old, derelict Richborough Camp from WW1.
Most men hoped that they’d have been able to gain employ­ment somewhere and then bring their families from Germany to join them. Kitchener Camp never offered this opportunity because the ref­ug­ees were only al­lowed temporary British residence vi­s­as and were re­quired to move on elsewhere. To obtain a place at Kit­ch­ener, then, men had to show that they had a good chance of emigrat­ing and finding work. 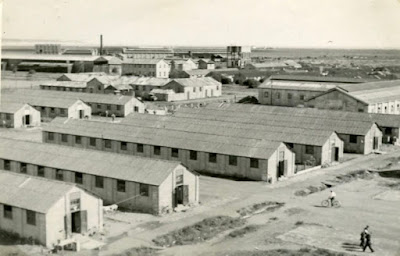 The sleeping huts and other facilities in Kitchener Camp were made ready
for 4,000 German Jewish men arriving in 1939

How did German Jewish men gain places at Kitchener? See the journal of the Association of Jewish Refugees/AJR which showed Werner Rosenstock had been emp­loyed at the Council of Ger­man Jewry in 1939, the only major Jew­ish German organis­at­ion still funct­ioning post-Kristall­nacht. He helped select as many men as poss­ible from those with likely successful appl­ic­­ations for tran­s­it visas. IF they were under 49 and had some kind of document­at­ion promising entry to a for­eign count­ry, they could be selected from the mass of applicants freshly rel­eas­ed from Nazi camps. NOT being selected could have been catastrophic. 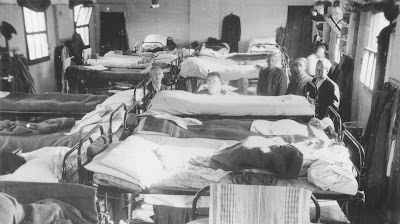 Dormitory huts
Some men were selected for th­eir ability to help reb­uild Kitchener camp in Kent; sh­ow­ing their practical skills meant they had a good ch­ance of being able to find work else where­. Afterall taking Kitchener from a derelict site to hab­itable in a month, to house c4,000 people, was a huge task. The Ger­man men had to install doors, windows and panes, roofs and elec­t­ric lights. After these re­p­airs, each hut was divided into 2 sec­t­ions, and 36 men slept in each.
Work was obligatory, and there was a lot to get through each day. Lo­c­al farmers trained some men in skills for growing their own food, ne­c­essary both for their immediate situation and as a useful skill for employment later. There were also roads to be built, ditches to dig, drains to clear, and ongoing hut re­pairs. There was some time off from the la­b­our­ing schedule, but it was stress­­ful for those Germans who’d been used to a professional life. Others worked in the kitchens, pre­paring, cooking and cleaning 3 times a day. Remember that 3,500+ men were fed here daily, achieved by 400 men work­ing in shifts.

Some men worked in the off­ic­es. And some taught classes since every man had to do Eng­l­ish lessons, supplemented by locals from Sandwich. Rabbi Dr Werner van der Zyl led read­ings, dis­cussions and services in Kitchener; he was aided by a cantor who’d been res­cued by Kitchener’s transit scheme. Holy day cel­­ebrations were held in the camp tent in 1939 when services were held under wartime blackout cond­it­ions for c3,000 of the men. 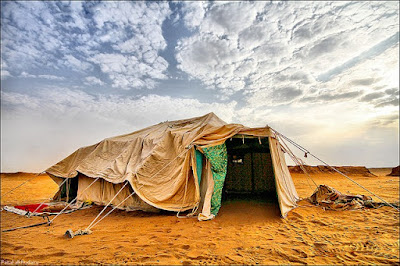 There was also a large contingent (c60) of dentists and doctors. So Kitchener camp had an isolation hospital unit, general hospital, First Aid unit and laboratory. 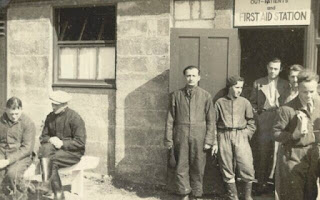 First aid station, Kitchener Camp
Music became hugely significant and as more professional musicians arrived, a camp orchestra was formed. Such was the orchestra’s reputation that in August 1939, a live BBC broadcast of one of their concerts was planned. 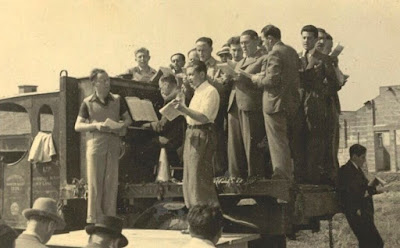 Musical presentation by Kitchener men
for camp residents and for visiting Sandwich families
For leisure activities, some men rode bikes along coastal paths or sw­am in the sea. On Saturdays they also had time alloc­at­ed to play foot­ball. At night they were allowed out of the camp with a pass, although there was a night time curfew. Sandwich is a pr­etty, historic port-town, and in 1939 the historic homes and buildings in town were still appealing. A local store, Golden Crust Bakery, had fur­n­iture in the back, where they ser­v­ed meat pies and drinks. The owner was soon persuaded to sell European coffee, giv­ing them somewhere hugely popular to go for Kaffee und Kuchen. Other men went to the Empire Cinema in Sandwich.
Despite the men being called Friendly Aliens, pub­lic opinion turned again­st German-speaking refugees after Dunkirk’s evacuation in May 1940 and the fall of Fran­ce. Refugees had three choices: 1. serve in the Brit­ish Army, 2. be in­terned or 3. be deported to Aust­ral­ia or Canada. Of the men on the infamous Dunera ship to Australia, 239 men had come from Kitchener.
Then Kitchener Camp was closed.
Thanks to Gerry Pearce, coordinator of the Berlin-Niederschoenhausen Project, for directing me to Kitchener Camp and for recommending Clare Ungerson’s book Four Thousand Lives (2014).

I don't understand why there was silence about this amazing camp, saving 4000 healthy working men. The British should be thanked, even now.
LMK

The men look grateful and contented. They escaped certain death and they were treated with respect. So why didn't England save more workers?

Bad link to Dunera. No h in what should be https . I searched your blog to remind myself of the Dunera Boys.

thank you!! I hate it when links don't work, especially to a topic as important as the Dunera. I corrected the mistake immediately.

I understand why there was silence from the 4000 men - they were anxious that they escaped to live and mainly thrive, while their wives and children mainly died back in Germany.

But why were the British government and British army silent about the terrific success? The Germans gave their formal permission for their men to travel to Britain, so the British weren't hiding anything from the Germans just before WW2 broke out.

from the letters and interviews back in 1939, the men were indeed very grateful. Not only did they avoid inevitable death in Germany, they were treated very decently in Kitchener Camp. Certainly the labour was intense, but once the working day ended, the men could enjoy football, an orchestra and choir, synagogue facilities, a coffee shop and cinema in Sandwich etc.

Now comes the more difficult question. Why didn't Britain open more camps? Britain certainly gained financially from all that free labour and they were clear that the Germans would not settle permanently, taking jobs from locals. So were they worried that more camps filled with Friendly Aliens would turn into Enemy Alien spies?

My parents were Holocaust survivors. they were separated: mother was sent with other women and children to Ukraine getto, father sent to work camps within Romania, not the Kitchener Camp style. He worked hard, under terrible conditions.
I always found it hard to read or watch movies about those times. Lately, I started to 'face' reality and read things. Inside, we have complete lack of governability, outside, Iran is approaching the bomb, and like Ukraine we depend on the West.

I find it sad that I knew so little about this camp. Thank you for choosing to enlighten us with this post.

nod... I know that tragic story very well. Thankfully parents were safely in Australia before the war but my in laws lived through the same hideous experience as your parents... and never really recovered.

I would not watch films about those times, if I was you, but I would certainly read books and journal articles. There weren't many governments who allowed desperate refugees over their borders, but there were individuals and organisations who did the moral thing and saved innocent lives. The Kindertransport and the Kitchener Camp were fine examples.

I too knew nothing about the camp, even though I was VERY familiar with the Dunera bringing thousands of German speakers from Britain in 1940. I assumed the men had been prisoners in places like the Isle of Man, not a safe haven like Kitchener.

But have we learned anything about desperate refugees since WW2? Not really :( We still drag ships back out to sea, imprison families on sealed Pacific islands or small African nations, sink rubber dinghies full of children or send the refugees back to their bombed out home countries.

Hi Hels - thank you for introducing me to this camp and other aspects of that period. I'm afraid I am aware, yet have chosen not to find out more - life must have been awful ... and I really didn't need to know. Now I realise so much more, and my knowledge is still microscopic ... and I've never been of political ilk ... though I do feel for refugees from all parts of the world. Thank you - Hilary

For those people born after 1945, they probably don't remember the millions of homeless people who desperately needed to be taken in and looked after. As it turned out, many of those people contributed far more to the nations that accepted them than did the refugees who were accepted. Just think of the brilliant architects, painters, composers, university scholars etc who made their news lives in Britain, France, US etc.

But this generation is facing the same issue - with starving or oppressed refugees desperately seeking protection from Myanmar, Afghanistan, Syria, Venezuela, Southern Sudan and now Ukraine. Those poor souls :(

it was and still is an important issue, agreed!