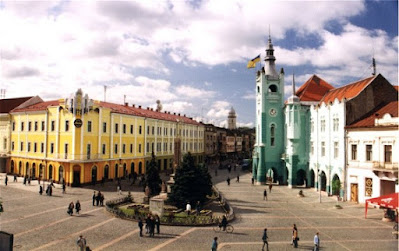 There were 3 main cities in the Trans Carpathian region. The Trans-Carpathian town of Uz­hor­od is now located in Western Ukraine. This beautiful city was the central hub for the regional railways system which departed for local provin­ces and to neigh­­­bouring Hungary and Slovenia. Khust is now located in Western Uk­raine, 3rd largest city in the county and surrounded by the Carpathian Mountains. Mukachevo-Munkács is a city in a river valley in the beautiful Zak­ar­pattia Oblast, now in Western Uk­raine. Both my mother-in-law and father-in-law were born in a small nearby town and did all their schooling & shopping in Munkács until WW2.
Historically the local Celts were displaced by the Carpis, and then in 895 AD the Hungarian tribes entered the Carpathian Bas­in via the northern Verecke Pass. In the C10th, Munkács became a regional centre of the Hungarian kings’ power.
In 1397, Munkács was granted by King Sigismund of Hung­ary to his cousin, the exiled Prince Theodor of Grand Duchy of Lithuan­ia, who used it to administer the Ruthenian region of the Grand Duchy of Lit­huania. Theodor became a vassal of Hungary and settled many Rut­h­enians in the territory. Note the colourful facades of Saint Nicholas Monastery.

1604-1711 was a time of continuous struggle against the expansionist intentions of the Habsburg Empire. In 1687 the anti-Habsburg Revolution started out from Munkács and the reg­ion played an important role in the War of Independence. 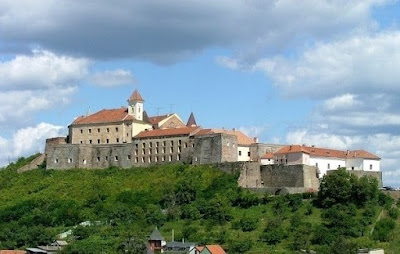 The medieval Palanok Castle lay above Munkács and played an important protect­ive role during the anti-Habsburg revolts (1604–1711). It was especially important in the anti-Habsburg Revolt of 1685-8. In 1726, the Habsburgs gave Palanok Castle to the Schön­born family who were respons­ible for expand­ing the town. They settled many Germ­ans in the territory, creating a regional econ­omic boom.

The city came under Austrian control in the mid-C18th as part of the Kingdom of Hungary, under the Habsburg Monarchy. So most of the city’s archit­ecture comes from the time of Austrian-Hung­ar­ian rule The Rákóczi-Schönborn Palace, for example, used to be Mukachevo rulers' home. Built in the Baroque and Renaissance styles, its elegant building is still considered one of the loveliest in town.

Top quality railways lines (Moscow-Kiev-Budapest-Belgrad; Prague-Bratislava-Vien) were established in town, meeting at the central station. Built in 1881, the station became the ter­min­us for beer, wine, tobacco, food, textile, timber and furniture in­dust­ries. And within the decade, the station needed to be expanded. 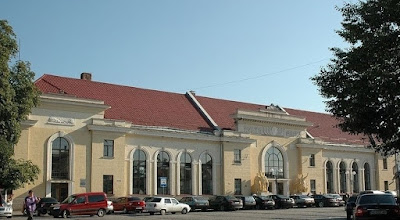 The Town Hall started in 1901, designed by a prom­inent ar­chitect from Budapest and was built in three years. Its bossed central tow­er was supported by massive carved pillars that thick­en­ed at the bottom and formed an arched entr­ance to the Town Hall. The towers' facades were décor­at­ed with small balconies. Lancet windows on the first floor and elegant double windows on the second floor were lovely. Sited on the main town square's centre, it was loved by architectural hist­orians. A chiming clock was installed on its main tower in 1904. 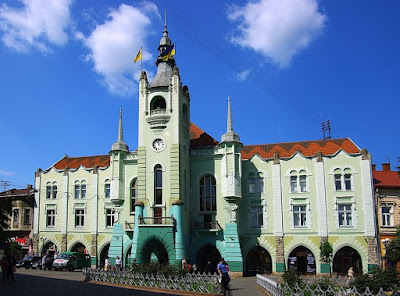 Town Hall
In 1919, the American-Rusyns agreed with Tomáš Masaryk to in­corp­or­ate Carpathian Ruthenia into Czechoslovakia. In mid 1920s, Munkács officially became part of Czechoslovakia by the Treaty of Trianon.

Educated and religious, the Jews of interwar Munkacs were famous for their Hasidism, Zionism and modern education. The first Hebrew-speaking primary school in Czecho­slovakia opened in 1920 and the prestigious Hebrew Gymnasium was founded five years later. The first cinema was established by a Hasidic Jew, closed on Sabbath and Jewish holidays. And until WW2 broke out in 1939, half the popul­ation was Jewish, the rest being Hung­arian, Slovak and others.

In Nov 1938, a part of the former Kingdom of Hun­gary was re-annexed by Hungary. The new authorities immed­iate­ly ordered the expulsion of all the Jews without Hungarian citizenship. So Polish and Russ­ian Jews, long-term resid­ents of the now Hungarian-controlled Transcarpathian region, were deported to a German Ein­satz­gruppe commando.

In 1939 after the Hungarians annexed Subcarpathian Rus, the 30 synag­og­ues in town were closed. In Aug 1941 some Jews were killed by the Germans. But despite the crises, Sub­carpath­ian Rus remained a relatively safe haven for Jews, until Nazi Germ­any occ­upied Hung­ary in spring 1944. Then the surviving Jewish resid­ents of the region were deported to Ausch­witz by the Nazis – the last Jew­ish community to die in the Holocaust. By mid 1944, the city was Juden-free. [Yet my mother in law and her younger sister survived the Holo­caust by moving to Budapest and living in hiding for 1944-5].

In late 1944, the Red Army liberated Carpathian Ruthenia. The territory was first given to the re-established Czechoslovakia, then became part of the Soviet Union, by a treaty in 1945. In 1945 the area was ceded to Ukraine and an ethnic Ukrainian population was transferred to the town. 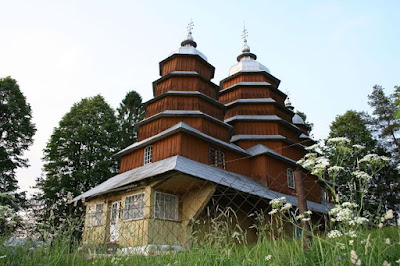 Across the Carpathian mountains were tserkvas i.e churches of horizontal wooden logs, built between the C16th-19th by the Eastern Orthodox and Greek Catholic faiths. They represented the cultural expression of both religions and the formal, decorative and technical characteristics. Note the tri-partite plan sur­mounted by octagonal domes and cupolas. They featured wooden bell towers, icon­ostasis screens, interior poly­chrome decorations, gatehouses & cemeteries. 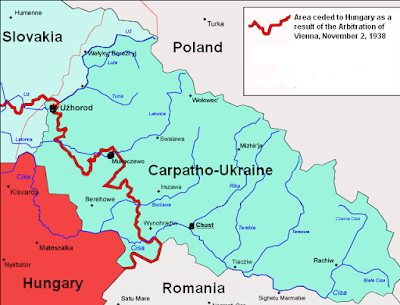 So the Trans-Carpathian region was Czech from the mid 1920s, Hungarian from 1938 and Soviet Ukrainian from 1946. When students went to school each day, they didn’t know what language their teacher would be teaching in.

The tserkvas Christian churches remind me of Chinese Buddhist Temples. Unexpected in this part of the world.

Hello Hels, The regional architecture looks like those antique building block sets made with stone blocks, with the exception of the tserkvas which have a South Asian vibe to them, with more that a touch of the Russian church style thrown in. Although all of these cities have had long, checkered histories, it is always depressing and disconcerting to read of their anti-Jewish and Nazi histories.
--Jim

All the Slavic languages share grammar and a lot of vocabulary. It would be relatively easy to change from Czech to Polish, Ukrainian or Slovak. But Hungarian doesn't share a single word with any other language, so the Czechs would have found themselves very lonely when the Hungarian border moved.

UNESCO says that the tserkvas record a distinct building tradition rooted in Orthodox ecclesiastic design interwoven with elements of local tradition and symbolic references to their communities’ cosmogony. Integral to tserkvas are iconostasis screens, interior polychrome decorations and wooden bell towers, none of the elements drawing on Chinese Buddhist Temples.

Even with the benefit of hindsight, I cannot understand why the Trans Carpathian region became so anti-Semitic and pro-Nazi. The architecture was attractive, the education system was good, the public transport was modern, and Christian and Jewish facilities were comprehensive.

One of the reasons I love reading your Blog is that I learn about places like this . I had no idea of its existence .Thankyou , it makes life interesting .

parts of Eastern Europe are truly delightful to visit. Prague and St Petersburg are my favourites, Krakow was my parents' favourite, Budapest, Dubrovnik and Odessa are also much loved.

I have no idea why the Hungarians speak a language that isolates them from almost all other societies on the planet. But perhaps Attila and his marauding Huns settled in the Carpathian Basin where the Magyars traded with Turks and Bulgars.

Even for Czechs who spoke and traded in the other Slavik languages had trouble adapting when Czech cities were annexed by Hungary in 1938.

I inherited a great deal of information about and love for Russia, Lithuania, Ukraine, Belarus etc but I too would not have known anything about the Trans Carpathian region. Meeting my in-laws-to-be in 1969 opened a whole new world of history and architecture.

I'd love to be an expert in European history but alas I am not and I now rely on picking up certain things from you. After Vienna and Budapest, I expect Prague would be one of my favourite European cities. While London is ok, continual progress has changed it so much, whereas the centres of the major European cities have been kept intact. I've heard the closest language to Hungarian is Finnish.

funny you should say that :) I never ever write about a story that I don't have tons of notes about, even if those 1990 notes have to be rapidly updated. But today, for the first time, I was writing a blog post regarding a site about which I knew nothing!

Re the languages. Quora said Finnish and Hungarian belong both to the Uralic family but they are in very distant subgroups. They had a common proto-language 5000 years ago so we can well assume that they are not very similar today. They may still share 2 words.

Hi Hels - it's an area and a history I know nothing about ... which I'd love to have time to explore: at some stage - thanks for investigating and writing up. Take care - Hilary

although my beloved didn't get to Australia until he started primary school, he never lived in the Trans Carpathian region himself. So once his parents left Munkács and the surrounding town in 1939, I had no more modern information from them. Thank goodness for my sister in law who spoke Czech and Yiddish at home, and Hungarian at school :)