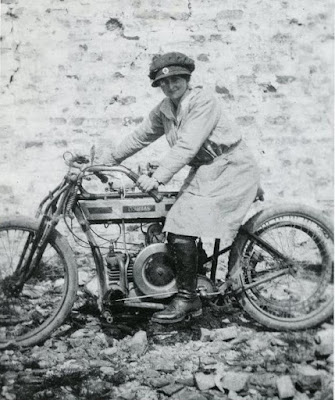 In 1859, businessman Henry Dunant  from Switzerland was travelling in northern Italy when he witnessed the aftermath of a bloody battle between Franco-Sardinian and Austrian forces near the village of Solferino. The fighting had left c40,000 troops dead or injured, and neither the armies nor the locals were equipped to deal with the situation; poor Dunant understood why.
Dunant started to advocate for the establishment of national relief organisations made up of trained volunteers who could offer assistance to war-wounded soldiers, on both sides. In 1862 Dunant wrote a book called A Memory of Solferino, to strengthen his plan. The following year, Dunant was part of a Swiss-based committee that put together the organisation. Thus the Red Cross formally became the network centred in Switzer­land, with worldwide divisions that provided assist­an­ce to victims of disasters, armed conflict and health crises.

In late 1863, the first national society was started in the German state of Württemberg.
The Swiss government invited the governments of Europe's countries & 3 other countries, to attend a top diplomatic conference. 16 countries sent a total of 26 delegates to Geneva. The meeting was presided over by Gen Guillaume Henri Dufour at Geneva's Town Hall in Aug 1864, the conference adopting the first Geneva Convention for the amelioration of the condition of the wounded in armies in the field. Reps of 12 states signed the convention.
The British Red Cross was formed in 1870, following the outbreak of the Franco-Prussian War.
This International Committee of the Red Cross adopted the symbol of a red cross on a white background, the opposite of the Swiss flag, to identify the neutral medical workers on the battlefield. In the 1870s, the Ottoman Empire began using a red crescent as its emblem, in place of a red cross.

Note that Dunant was forced to declare bankruptcy in 1867, and resigned from the Red Cross. Nonetheless in 1901 he received the first-ever Nobel Peace Prize because without him, the Red Cross, the supreme humanitarian achievement of the C19th, would probably have never been undertaken.” 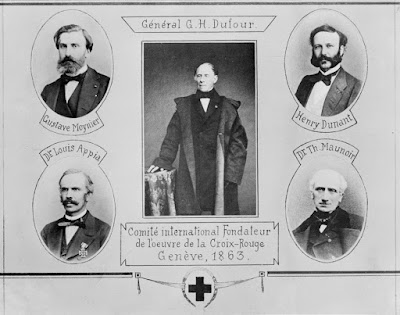 At the end of the American Civil War,  Clara Barton aka Angel of the Battlefield received perm­ission from Pres Abraham Lincoln to operate the Missing Sold­iers Office, to help locate missing troops for their families and friends. Within several years, Barton and her small staff received thousands of letters asking for help and were able to track down 22,000 men. Barton travelled to Europe to recup­er­ate from years of tireless war-work, and while there, she learned about the Red Cross movement for the first time.

Back home, Barton started a long campaign to get the U.S to ratify the 1864 Geneva Convention; it did so in 1882, a year after Barton founded the American Red Cross. In 1898, the American Red Cross aided in war for the first time when it gave medical care to soldiers in the Spanish-American War.
Although we think of deadly war as a C20th development, relief societies and armed conflicts were increasing in numbers in the late C19th: the Franco-Prussian War of 1870, the Russo-Turkish War of 1875-1878 and the Spanish-American War of 1898.

Mehzebin Adam, curator of the British Red Cross Museum and Arch­ives, is marking its 150th anniversary with a fine online exhibit­ion called 150 Voices. It does not assess the effectiveness of the Society; the exhibition’s role is to recall how Dunant urged all nations to create volunt­eer groups to provide imp­artial relief to the sick and wounded. The soc­iety he establ­ished was based upon the rules of the Geneva Con­vent­ion and joined the global Red Cross movement to work towards the shared goal of help­ing ALL people in need. Based on 150 items from the British Red Cross Museum and Archives, the exhibition celebrates the charity’s history of connecting human kind­ness with human crisis. Readers can admire the bust of Henry Dunant, the Red Cross flag carried during the Franco-Prussian War and a photograph of French female ambulance drivers running to their vehicles.
Red Cross workers were usually nurses, dressed in their iconic white uniforms, helping the wounded with medicine and sympathy. But the woman in the above photograph was sitting astride a Douglas motor­cycle, in a canvas military coat and heavy boots. She was braced for the dangers that she would have likely met, carrying medical supplies and communications between Red Cross units in WW1.

Helen, I appreciate this post. There isn't a person in the world who doesn't know Red Cross. Yet most would not have a clue about who started the organisation, where, why and which other nations came on board.

Thank goodness the 1870-1 photo of the horse drawn ambulance survived. Although horses drew every product transported by civilians and military men, I haven't seen that particular image before.

I wonder what the early organisers would think of the empire it went on to become.

Hello Hels, Although I know that the Red Cross has done a lot of important work, often under harsh conditions, let me tell you why my father detested the organization. When he was a young man he was involved in a major train wreck--I believe that hundreds were killed in the incident. He stated that the Salvation Army was there on the spot, doing everything that it could, while the Red Cross set up a stand and was selling coffee. This angered him so much that he never forgave the Red Cross, although he was a lifetime supporter of the Salvation Army, In fact, late in his life I found out that in addition to financial support he had been a board member of the Salvation Army for years, even though he never mentioned this at home. I guess the lesson here is that a reputation is a delicate thing, and when impaired not easily restored.
--Jim

that is so true. I assumed Australia would have been an early joiner on the worldwide list of Red Cross nations. But no, the Australian branch of Red Cross didn't start until Aug 1914, a week after the outbreak of WWI.

*nod* Ambulance Victoria said that in 1883, ambulance services began the first branch of St John Ambulance Association. In 1887 sufficient funds were raised by St John’s Ambulance to purchase six litters which were placed at police stations and soon after, the first horse drawn ambulance began operation. The first Melbourne ambulance station was a stable complex off Bourke St.

European countries were colonising the world, dominating health care, architecture and trade. Until WW1, the Swiss, French, German, Italian and British etc would have expected that the rest of the world would have been very keen to learn how to improve life, based on their models.

How quickly the world changes!

you are not the first person I have heard criticise Red Cross:
1] Red Cross isn’t a group of doctors, like for example Doctors Without Borders.
2] For fifty years, the International Red Cross has refused to admit Israel’s Red Star of David. This was despite it meeting all other criteria for membership since the 1930s, on the grounds that Israel does not use the approved symbols (Christian cross or Muslim crescent).
3] Despite promising to spend 100% of raised funds on the victims, some countries spend 20% of the money on administrative costs.
4] Red Cross blood in the U.S remained segregated nationally until 1950, and branches in Southern states ... even longer.
etc etc

Hi Hels - it's interesting to read how the Red Cross developed, grew and changed over the years. Thanks for the overview ... and yes thankfully the uniforms have adapted ... take care down under - all the best - Hilary

If we are very familiar with a big organisation in the modern world, we assume we know about that organisation since the very beginning. Thus I am very grateful that Dunant who urged all nations to create volunt­eer groups to provide imp­artial relief to the injured. Ditto the Geneva Con­vent­ion in 1864.

I assumed the Geneva Convention for the Amelioration of the Condition of the Wounded in Armies in the Field was created after the 1914-8 World War, but it was actually held in 1864! Two factors should be noted: 1] from the beginning it was closely linked to the International Committee of the Red Cross and 2] the Convention was significantly revised three times until the last time, 1949.

A fascinating history, Hels! I had heard that about the refusal to admit Magen David Adom - very strange “reason” given and if anyone believes it I have this bridge to sell them. But that doesn’t take away from the original achievement, and if I needed an ambulance I wouldn’t turn down a Red Cross one!

I am totally impressed by international organisations and by professionals who will treat injured or suffering people, whichever side they are on. Yes of course there have been criticisms of the Red Cross since the 1860s, but its contribution overall has been amazing.

Another organisation that I have become aware of during the last few decades is the Africa Mercy Hospital Ship Organisation. These hospital ships sail around West African port cities, with surgeons and other medical staff from dozens of countries, operating on locals for free. If it wasn't for Red Cross creating such an important international organisation, I don't think Mercy Ships would be operating today.