Gertrude Bell and archaeology in Iraq, World War I and world conferences 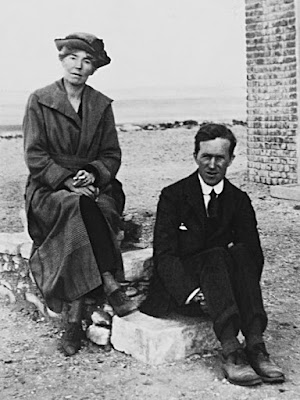 Gertrude Bell (1868-1926) was the grand­daughter of a British baron­et and the daughter of an influential iron-and-steel dynasty. She was only 3 when her mother died, but she was lucky having an aff­ect­ionate and imaginative father. But this headstrong, clever child lacked chall­enge. As a teen she seemed to be facing a life of cocktail part­ies whereas her brain actually required education beyond the mand­atory French, German and etiq­uet­te training.
Gertrude Bell and T.E Lawrence (top image)
Credit: Eleanor Scott Archaeology
In 1884 she was sent to Queen’s College and then attended Lady Margaret Hall at Oxford University. She completed their history de­gree in just 2 years, and was the first woman to win a 1st Class Honours in Modern History. Bell now looked for a role in life.
Gertrude spent the next 15 years in constant travel, to Persia, It­aly, Swit­zerland, Mexico, Ja­p­an, China, Greece, Lebanon, Palestine, Burma, Egypt & Algiers. In Switzerland she developed a new passion that became central to her life: risk-taking mountaineering.

The chance to direct herself to a valuable cause only came in 1899 when she met arch­aeol­ogist David Hogarth and his world of Middle East ant­iquity. Already fluent in Persian, Fr­ench and German, Bell studied Arabic and Hebrew as well, and in 1900 she completed the first of her desert travels through Pal­est­ine, Leb­an­on and Syria. It was then she began learning desert rules and the social pract­ices of nomadic Bed­ouin, building up valuable friendships among sheiks, warr­iors and Mesopot­amian merchants.

But from 1900-12 her focus was on developing her skills as an arch­aeol­ogist, map-maker and ethnographer in a tough part of the world. She became a specialist in Byzantine religious architecture, and her 1907 trips with Sir William Ramsay in Anatolia became the basis for her book, The Thousand and One Churches (1909).

1911 was when met the young archaeologist T.E Lawrence (1888–1935) aka Lawrence of Arabia. They shared a passion for Arab­ic cul­ture and antiquit­ies, becoming powerful forces in the next dec­ade promoting Arabic independence from the Otto­mans and from Eur­ope. Years earlier she had had her first romance in Tehran with British foreign serv­ice­man Viscount Henry Cadogan; sadly Cadogan soon died. Later in Turkey and Syria, she loved married Brit­ish army officer Charles Doughty-Wylie, killed at Gallipoli (1915).

In 1913 Bell travelled by camel through modern Saudi Arabia and Iraq, hoping to reach the famed White City of Hay­yil. She negotiat­ed her way thr­ough cont­ested territories, critical water short­ages, hostile tribes and the shift­ing sands. Then she went home with maps and knowledge of Arabia that were invaluable as Europe faced WW1.

With Turkey and Germany allied, the Middle East suddenly became an area of military importance remote from British intell­igence. Who were the relevant powers there? Who did they support? So in 1915 Gertrude Bell trav­el­led to Cairo, to work with Brit­ish Intellig­en­ce, com­pile inform­ation and form a strategy for org­anising Arabic res­is­tance to Turk­ish rule. However she did not participate in the Sykes-Picot Agree­ment in 1916 that led to the div­is­ion of Turkish-held Syria, Iraq, Lebanon and Palestine.

Bell attended the Paris Peace Conf­er­ences (1919-20) to honour the Allied promise of Arabic independence. She opp­osed French del­egates who were setting up their mandate in Syria. And she opposed the British delegates who were creating a British mandate in Iraq and creating a Jewish homeland in Palestine. She wrote about the creat­ion of a Jewish homeland after the Balfour Declar­ation. “I hate Mr Bal­f­our’s Zionist pro­nouncement about Greater Syria. It’s my belief that it can’t be carried out; the country is wholly unsuited to the ends the Jews have in view; a poor land, incapable of great devel­opment and with a solid two thirds of its population Moham­med­an Ar­abs who look on Jews with contempt. It’s a wholly artific­ial scheme divorced from all facts and I wish it the ill-success it deserves.” 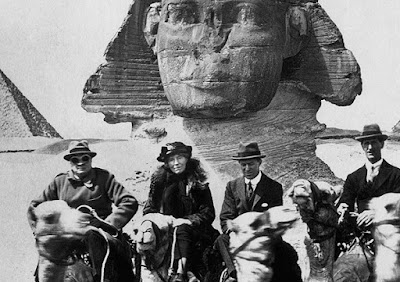 Among the 39 participants of the 1921 Cairo Conference, Sphinx of Giza
Left to right: Winston Churchill, Gertrude Bell and TE Lawrence.
She went to the 1921 Cairo Conference. While other British offic­ials argued for Iraq’s continued sub­servience to Britain, Bell arg­ued forcefully for their indep­end­­­ence, and for the prom­ot­ion of a larg­er Arabic state from France. For a newly un­ified Iraqi state, Bell and D.H Lawrence recommended Faisal bin Hussein, former command­er of the Arab forces that helped the British during the war. And through his charis­matic leadership, a nation was forged! Bell became one of King Faisal’s most trusted advisors, and a fig­ure beloved by Baghdadis.

Bell wrote books during her travels and left 7,000 negatives of photographs from her journeys, which arepapers at the Gertrude Bell Archive at Newcastle Uni. She photo­gr­aphed some of the precious ancient sites, thus providing some of the last remaining evidence of Aleppo and Raqqa, later destroyed by ISIS.

Bell’s greatest legacy was in the recovery and preservation of an­cient artefacts and archaeological sites all over the Middle East. She promoted greater literacy in her role as president of Baghdad Public Library and saved thousands of ancient manuscripts. In 1922, Bell began ass­embling it­ems taken by Euro­pean and Amer­ic­an arch­aeol­ogists, getting the Nat­ional Museum of Iraq in Bag­hdad est­ab­lished in 1926. The Museum’s collect­ion of arte­facts from the 5,000+ year of Mes­op­otamian history were in 28 gall­er­ies. Sadly much of this was looted in the US invasion.

She died in 1926 in Baghdad at 57 from malaria, pleurisy and lung cancer. The citizens lined the streets to pay respect to this wealthy British atheist who’d dedicated her life to Arab culture. 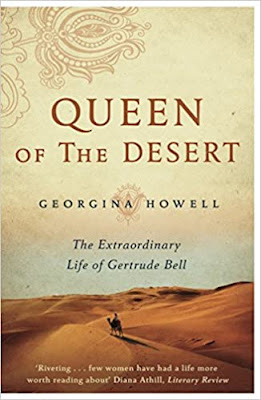 See the documentary Letters from Baghdad: Extraordinary Life and Times of Gertrude Bell .
Read Georgina Howell’s book Gertrude Bell: Queen of the Desert (2006) and Gertrude Bell, Byzantine Archaeology And The Founding Of Iraq by Dale Debakcsy.

It is not what I know about this world, it what I don't know that troubles me. What a marvellous woman and how few people would have ever heard of her, yet we of a certain age know quite a bit about Lawrence of Arabia. It seems like she may have outshone him by far.

PS I like the dominant position she has taken in the photo of her and Lawrence.

Gertrude Bell was the best travelled, best linguist and most successful professional woman in the world, but she must have been so lonely. I would want a partner to come home to at night.

thank you for reading my post. But I don't accept advertising.

Hyperallergic said the information Bell collected was invaluable to the British government, including mapping the borders of modern-day Iraq. She held an intriguing position as a military officer, and was part of the British colonial machine, carving up the Middle East for military gains and oil. Lawrence seemed to have overstated his own importance but Bell's diaries and letters provided quality information. She put her faith in the locals, rather than the governing foreign powers, and always tried to tip the scales in their favour.

I have seen many photos of Lawrence of Arabia and Gertrude Bell, and in each one, she is more central, higher or in front :)

The most important men in her personal life were:
Henry Cadogan, a member of the foreign service she met while visiting Iran in 1892;
British colonial administrator Sir Frank Swettenham in Singapore; and
Maj. Charles Doughty-Wylie, married. So although she had plenty of choices, these men were too poor or killed in WW1. It was a very busy life but as you say, it must have been a lonely life.

Hello Hels, Gertrude Bell was certainly a doughty woman, and accomplished a lot, but in a delicate area with many populations and factions, where right and wrong always have a large subjective element. For someone who had to be a good politician to get along with all those people, and who reportedly was a friend to many Jewish people, her statements at the Paris Peace Conferences lack grace, and constitute nonconstructive criticism, to say the very least.
--Jim

her statements were actually nasty, nod. And another bit of nastiness: Gertrude Bell did not believe women should have the vote. So adamant was she that, in 1909, she became secretary of the Anti-Suffrage League.

I know all humans are flawed. But I left out Bell's flaws because she was either ignored or berated by men in her own era, and I didn't want to re-weaponise the men back then.

Then Gertrude Bell is a great model for you :) Read the many Bell posts in ELEANOR SCOTT ARCHAEOLOGY
https://eleanorscottarchaeology.com/

Hi Hels - thanks for this ... I have Howell's book here to read ... so now I'll refer back to your post and information in the comments ... always good to have some background knowledge. It'll be such an interesting book to read and learn more about the region. Take care and stay safe - Hilary

All the historians knew that Gertrude Bell was fascinated by archaeology, foreign languages and Middle Eastern history. But the reason _Howell_ was worth reading was because she loved that Bell was a woman who transcended the powerful restrictions of her gender, social class and the era in which she lived. Enjoy!

A fascinating woman. She led an adventurous but dangerous life. I can only imagine what a formidable woman she must have been to achieve enough recognition to be listened to by the governments of that time.

Originally Bell must have feared a life of locked-in aristocracy and worrying about nothing more serious than her next cocktail dress. So I agree... an adventurous, political active life have been well worth pursuing, but at great risk to herself. Many women since would have thanked Bell for her bravery and determination.