Dressmakers of Auschwitz: amazing, true story of Women Who Sewed to Survive

Thank you to the Jewish Writers’ Festival in Sydney who will be discus­sing this book on Zoom at 8 PM Thurs 14th October 2021. 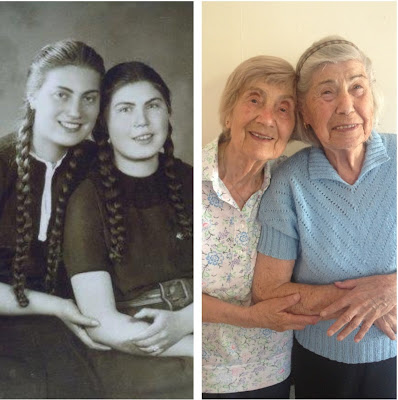 sisters Berta and Katka Kohút,
1941 and 2013
Times of Israel
Amid the horror of the Holocaust, a select group of hand-picked Jewish women and girls, were segregated from their peers in Auschwitz. They set up in a dedicated workshop, to des­ign, cut and sew beau­t­­if­ul fash­ions for elite wives of Nazi camp off­ic­ers. The fashion workshop, the Upper Tailoring Studio, was soon very popular. The dressmakers produced high-quality garments for SS social functions in Auschwitz, and for ladies from the Nazi upper crust. The Studio’s fame spread and even classy Ber­lin women were soon waiting months for an Ausch­witz outfit. When the seamstresses had more work than they could handle, the SS wives occasionally rewarded them with a food parcel.
In London, author Lucy Adlington was browsing through arch­ive doc­uments from the 1930s and 1940s, to learn about what it was like for women during the war. She came across a reference to a fashion salon in Aus­ch­witz, but originally with very little information. Init­ial­ly the historian only had a list of nicknames names of the seam­st­resses: Irene, Renee, Bracha, Hunya, Mimi etc and trying to find wom­en’s real names in records was tricky. Furthermore survivors may have changed their names later, on marriage.

In looking for information about the former dress­makers, Adlington discovered inspiring stories of res­istance and survival, pub­lished in Sept 2021 as The Dressmakers of Auschwitz: The True Story of the Women Who Sewed to Survive. Drawing on diverse sour­ces, incl­ud­ing interviews with the very last sur­viv­ing seamstress, her book fol­l­ow­ed the fates of these brave women whose bonds of family and friendship helped them endure pers­ecution.

Adlington wrote about the context of Nazi policies for exploitation. If Jews were vermin, she asked, how did Nazis accept the hand­ic­raft of the seam­stresses? The Nazis clearly put far more value on Jewish goods than they did on Jewish lives, and high-ranking Nazi officials and their fam­il­ies were thrilled to wear clothes creat­ed by the vermin. Thousands of people were already forced to work in work­shops set up in other pris­on camps, but this work­shop was not for making or mending military unif­orms. Instead it was created purely for an elite who sat­is­fied their love of fashion in the middle of Nazi Hell. 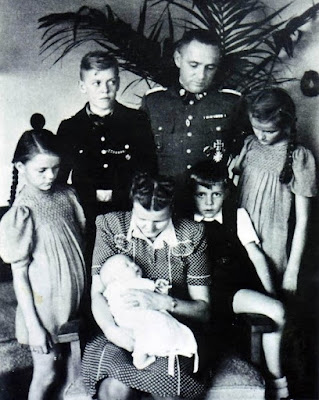 Rudolph and Hedwig Hoess and their children
when their last baby was born in Auschwitz in 1943
Times of Israel
It started when Hedwig Hoess, wife of terrifying camp commandant Rudolph Hoess, asked her husband for a prisoner to mind the children and to sew. Af­­t­er bring­ing a Slovak Jewish woman Marta Fuchs into her home, Hoess started re­ceiving requests from other envious SS wives. Marta Fuchs recruited more seamstresses, and sewing activities were moved to a workshop in an administration site. The Nazis had always understood the power of cl­ot­h­es, from classy uniforms to high fash­ion. So even Magda Goeb­bels, wife of Hit­l­er’s propaganda minister Joseph Goebbels, happily wore these Jew­ish creations. In fact the Jews were actively helped; they were given access to the mass­ive stockpile of plundered possessions taken from the Jews on arrival at the camp. 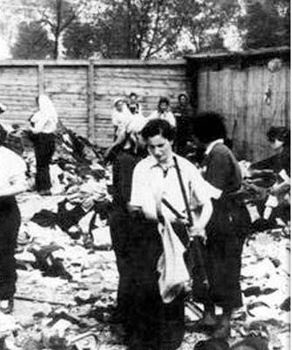 The seamstresses gathered materials
from the clothes plundered from newly arrived prisoners
Express
Marta Fuchs became the head seamstress, wanting to save as many women as possible in her haven. So yes, they had weekly washes, they had meaningful work and their food rations were safely located. Most impor­t­ant­ly they didn’t have to fear selections for gas chambers.

Additionally some seamstresses were quietly helping und­er­ground resist­ance move­ments by using their “privileged” positions to communicate with the outside. They collected and distributed medicines, and stole what­ever they could. They had occasional access to newspapers and to rad­ios, so they knew when the Allies had invaded France. Plus they want­­ed to survive and provide witness to Nazi atrocities.

As soon as Berta Kohút could, she brought her sister Katka in. In 1.5 years of the workshop operating, c40 Slovak Jewish women professionally sewed gowns and cock­tail dresses for Nazi wives. When the Red Army was approaching Auschwitz to liberate survivors, the workshop prisoners prepared to evacuate; they organ­ised extra cloth­ing for the coming Death March to Ravensbrück in NE Germany, in freezing Jan.

Main death camps, from Knowitall.org
It was a very long march from Auschwitz to Ravensbruck
In 2017 Adlington re-imagined these women in a young adult novel called The Red Ribbon. Her fictional ac­count of the dressmakers told the story of four young women who stitched clothes at the dress-shop at the Aus­chwitz camp in order to survive. When this novel was published, people contacted the author to help identify the real women.

Adlington could then speak to families of the real Auschwitz dress­­makers and in 2019 she met a surviving seamstress in San Franci­s­co, 98 year old Berta Kohut. A great connection! Berta rem­em­bered names, events and details. Using the skills learned in her dad’s tailor shop, Kohút ex­celled as a seamst­r­ess. Some of the women did not arrive with the skills & experience, but the group accepted them in solidarity.
Later in the U.S Berta had learned how to use a computer. And after Berta’s death in 2021, her son Tom Areton corresp­ond­ed with Lucy Ad­ling­ton. Berta did not live to see the book pub­lished, but she knew this valuable testament to the seam­st­resses was coming, in 15 languages!

While Ad­ling­ton was able to speak to other dressmakers families for her book, she wasn’t able to find any trace of the outfits that were tail­ored in WW2. However she did find an order book in the Workshop that regist­er­ed the names of the highest Nazis in Berlin, showing which Berliners were ordering their clothes from Auschwitz. 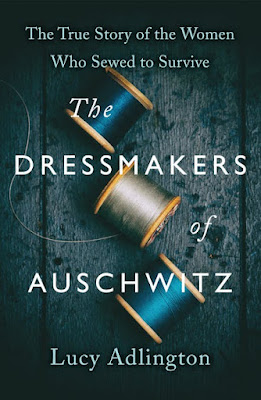 Helen The Kohut sisters remind me of my mother and her sister. My mother had fake papers that allowed her to work in a job in 1944 and 1945. So she brought her young sister across the border and kept her in a safe facility until the war ended. Not too many Jewish women lived to tell the tale but those with a loving sibling had at least some chance of survival.

thank you for reading this important post. No advertising please.

Lucy Adlington made it perfectly clear that only the special bonds of family and friendship helped at least a few women endure the pain and escape the camps alive. There is no way Katka Kohút would have survived the concentration camp, had it not been for Berta's loving determination. And there is no way your aunt would have survived, had it not been for your mother's amazing efforts to hide her.

Hello Hels, This is indeed an amazing story, but one that tells of intensified (and as you pointed out hypocritical) exploitation by a horrible totalitarian power. However, each life saved was precious. We have already discussed some of the labor camps that prolonged some prisoners' lives at the expense of such exploitation, and how this allowed some people to stick together and even gain privileges, although in the end most did not survive the Nazi horror.
--Jim

It was known that those in the camps who had good to excellent skills, got better chance of survival. Glad the story of the seamstresses at Auschwitz is out.
Hope history doesn't repeat itself, because the world now is even more cruel than in those days. There's this motto of "never again" which very few believe in it. If not the Nazis, there are others waiting in line to perform atrocities.

This is a fascinating story and to manage to trace one of the seamstresses is even more remarkable.

I wouldn't have been surprised if prison camps and even concentration camps wanted to utilise prisoners' skills, to maximise the camps' profits before the prisoners died - to do otherwise would have been counter-productive. Even prisons in modern democracies use inmates to farm, run laundries or train dogs.

But this was something different. The seamstresses didn't farm and didn't help either the camp economy or the town of Oświęcim. Their labour _exclusively_ benefited the wealthy German elite in a hypocritical exploitation of the darkest, verminous enemy. I understood what Adlington said about the German elite's priorities but in a country where Nazi values were all consuming, this explanation seems a bit inadequate.

I agree.... the world had to have learned a very important lesson about the Nazi Holocaust and the ability to exterminate millions of ordinary families without any outsiders intervening. But I too suspect not. Fascist, far-right, authoritarian and ultra-nationalist governments are more popular now than at any time since WW2 ended.

Unfortunately the story of the seamstresses at Auschwitz didn't emerge publicly until 2017. Wouldn't it have been wonderful had any surviving inmates, or SS wives in Berlin, still been alive when the book was first published.

nod.. you and most people in the world. The number of seamstresses involved was very small, but the symbolism of their story is powerful.

YES! Of the 7.8 billion people on the planet pre-Covid, what was the chance that Adlington would find the ONE survivor from the Auschwitz seamstresses still alive in 2021? Even more improbable, what was the chance of a woman who had no proper food or medical care during the long, cold years of the war still having her memories and speech intact?

Quite a story. Funny how evil people can overlook the 'defective' race for their own convenience. Well done Lucy Adlington, who I don't expect will make a fortune if judged by the number of hours and expenses that went into the book.

the author was both dedicated to her mission AND fortunate. And thank goodness for Berta Kohut's son, Tom Areton, who had written down everything his mother had told him over the years. Perhaps he predicted a future book.

Re overlooking defective races for their own convenience, it reminds me of the Children Overboard crisis. Before the 2001 federal election, conservative ministers said illegal asylum seekers i.e the scum of the earth had thrown their own children overboard, to secure safety in Australia. As a result, the conservatives simply adopted stricter border protection measures, against refugees.

I am sometimes left surprised and brain strained by some of your posts but this is just totally gobsmacking . That these seemingly ordinary Nazi women could comfortably use these feminin skills in dressmaking and child minding and not see the absolute emotional and empathic dissonance in those acts which are very intimate ,is just incredible. These people must have completely closed down their ability to relate to these women and yet they trusted them to make their clothes, presumably touch their bodies and mind their children . I am finding it increasingly difficult to look at human nature for very long as my natural optimism about our capacity to evolve and become better creatures is being very tested at the moment looking at what is going on both near and far .

you are quite right mentioning the child minding. Presumably loving SS mothers would be very concerned about the quality of care their young children were receiving. [When I wanted child care, I personally interviewed the candidates twice and checked all their references in detail]. So you have to assume that the SS mothers didn't believe that Jews were vermin, or that their SS husbands had no say on domestic responsibilities.

When I saw anti-vaxxers beating medical staff outside Covid hubs this year, it was clear that at least a minority of the human race has crawled back into the sewers from which they emerged after WW2.